Trip Dispatch: Golf like a celebrity in Santa Barbara, California 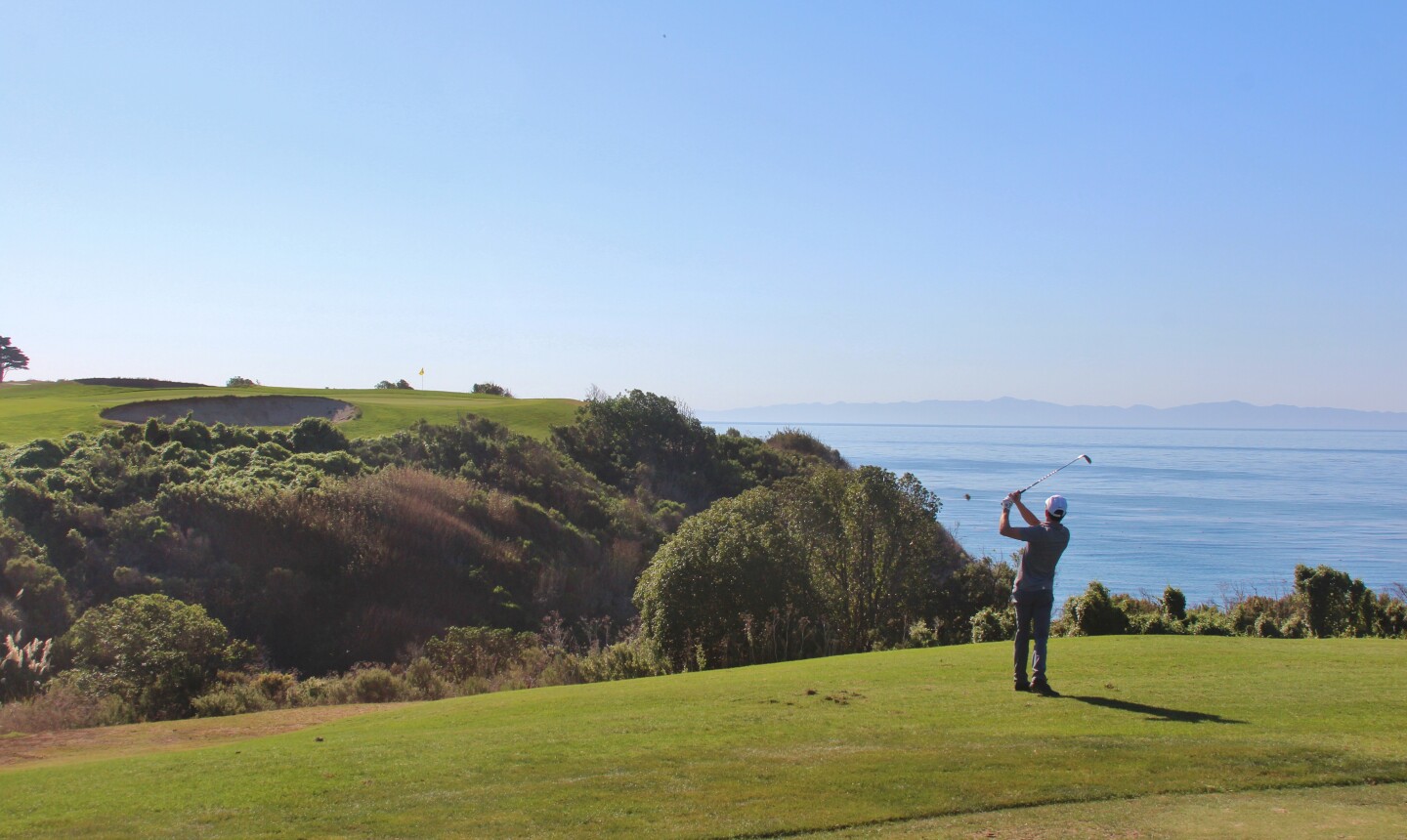 What an approach to the par-5 13th hole at the Sandpiper Golf Club. Jason Scott Deegan/Golf Advisor 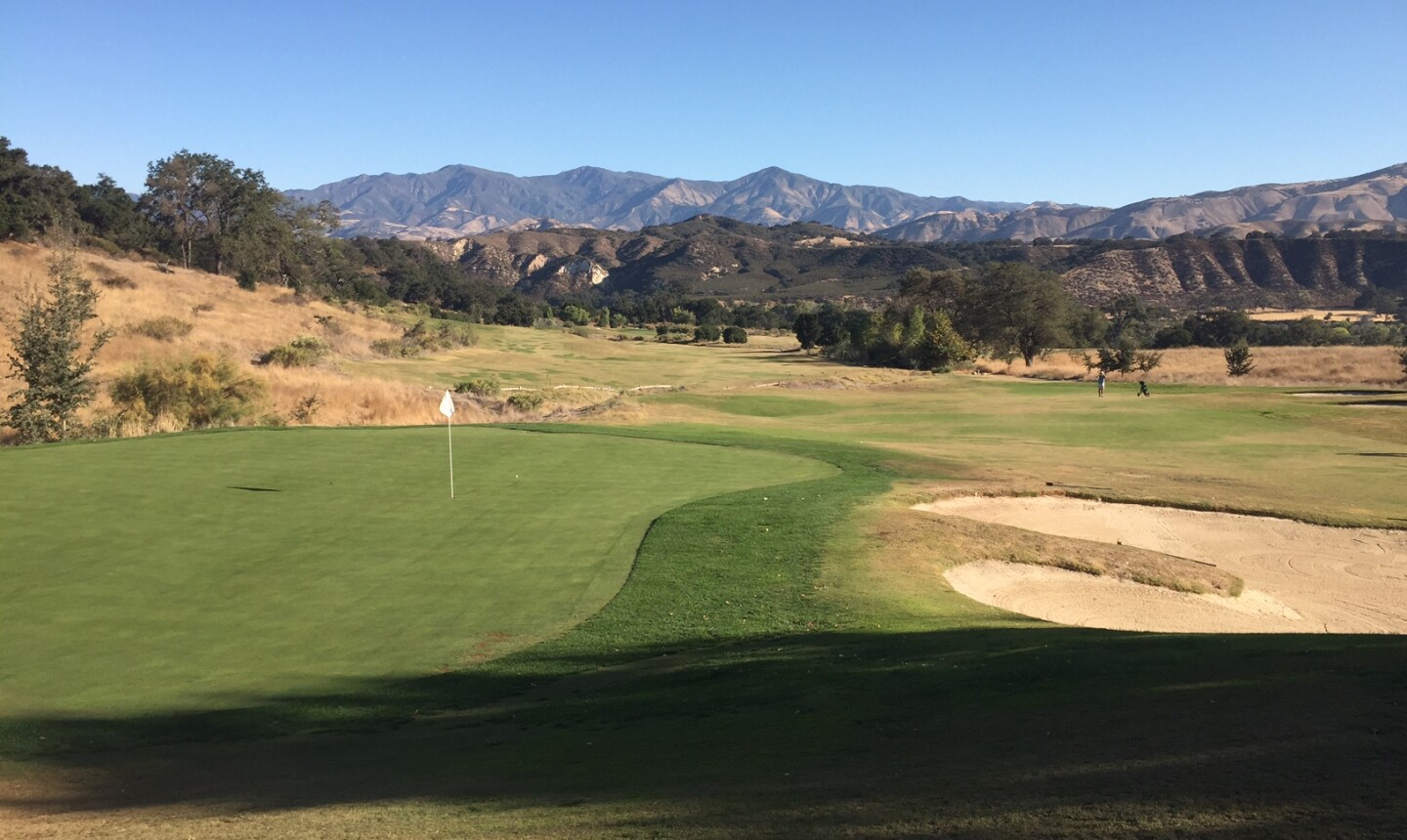 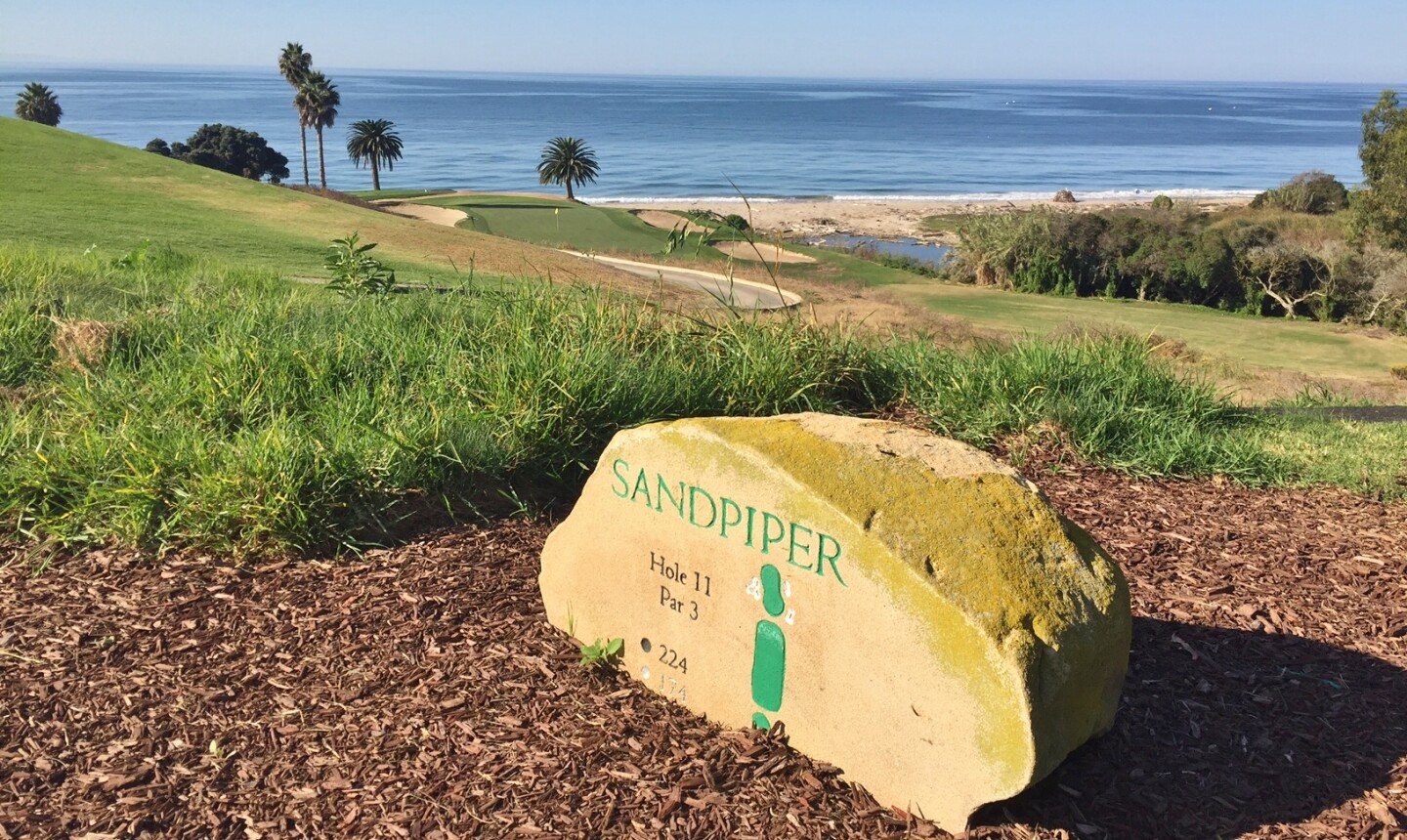 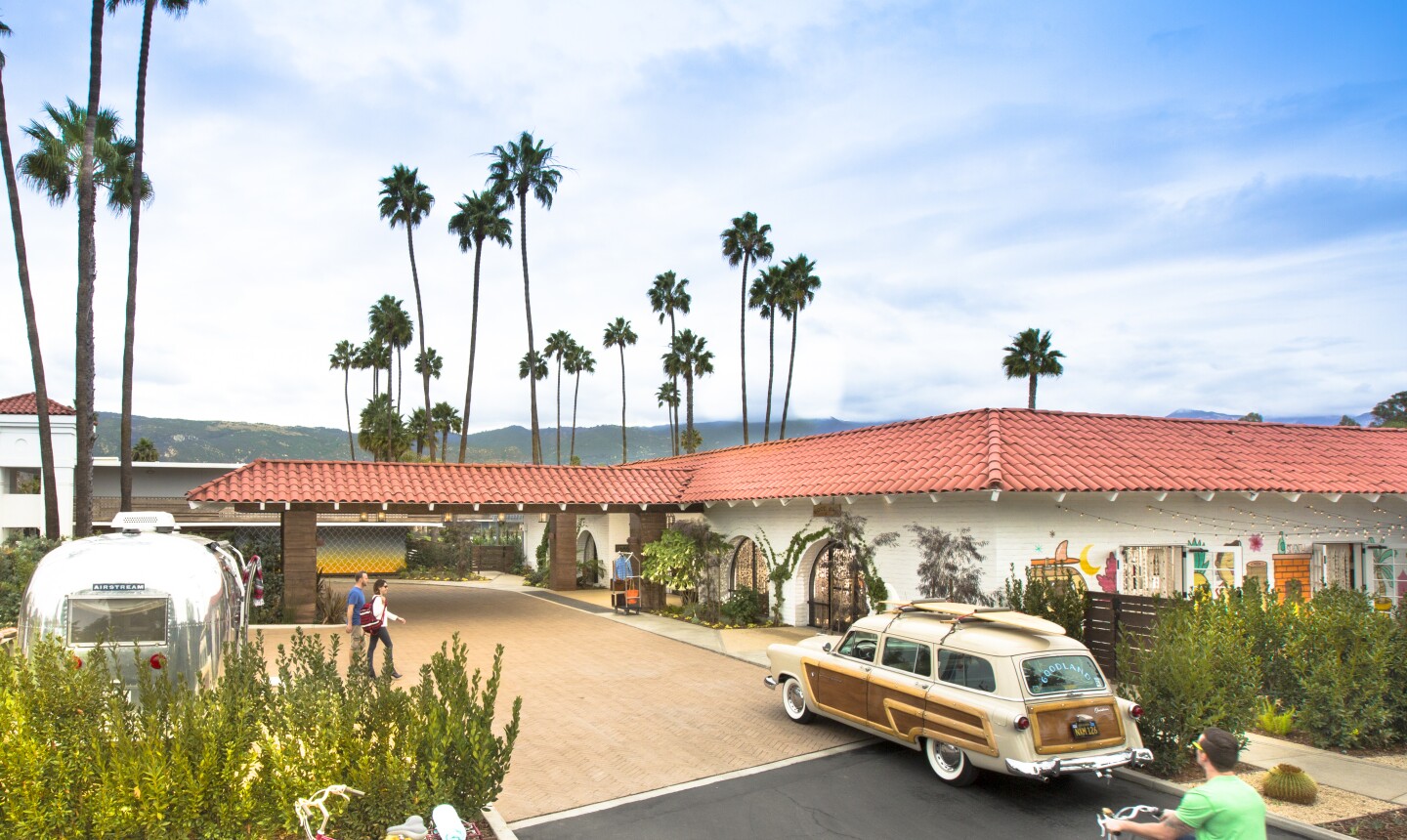 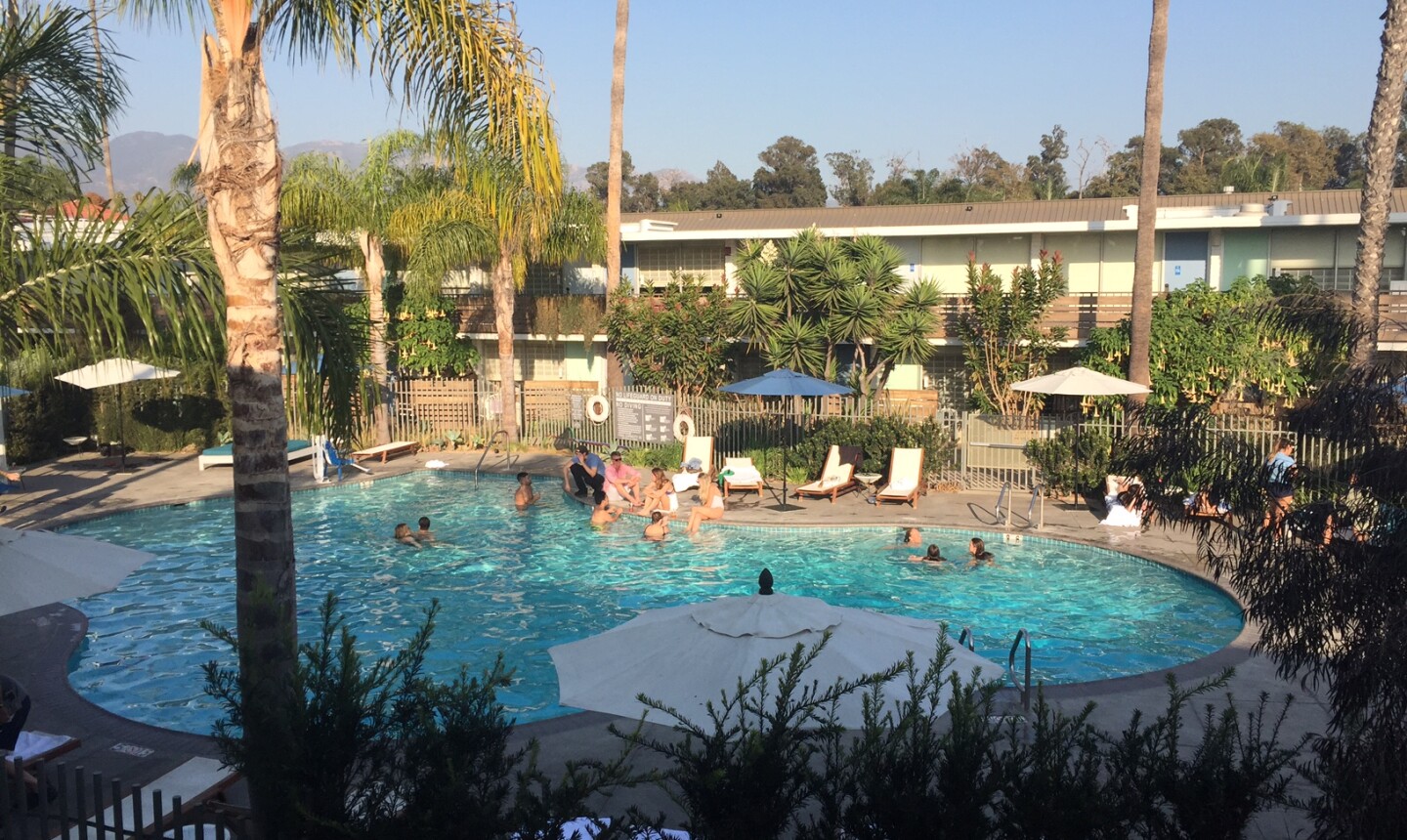 The Kimpton Goodland pool area is a nice place to hang after golf. Jason Deegan/Golf Advisor

SANTA BARBARA, Calif. - Wherever you go in Santa Barbara, the whispers of celebrity sightings follow.

Oprah owns a house in this neighborhood. Michael Jordan has played a ton of golf here. Celebrity X, Y or Z loves this restaurant and shops there. This is LA's playground.

Thankfully, I'm not TMZ. Or the paparazzi. I'm just visiting for the golf. And boy, is it spectacular thanks to a reclusive billionaire more loaded than the biggest Hollywood celebrity. Ty Warner owns Ty Inc., the brand behind Beanie Babies.

Remember collecting those plush toy animals all the rage in the 1990s? Or did you forget that one time you failed to find the rare 'Claude the Crab' while Christmas shopping for your kids? For a while, my daughter got hooked on Beanie Boos, the modern version launched in 2009.

Santa Barbara doesn't have the depth of courses that the Monterey Peninsula or San Diego boast, but it's easily one of the top five golf destinations in California thanks to Warner. I spent a recent fall weekend lathered in 80-degree weather learning why:

As first impressions go, it's easy to love Santa Barbara. When the main highway through town, U.S. Route 101, overlooks the Pacific Ocean, you know the city planner did something right.

Check-in introduced the fun, retro vibe of The Kimpton Goodland, a 158-room boutique hotel in Goleta, Santa Barbara's sister city to the north. Right off the lobby is a tiny closet-sized room where guests can rent vinyl records for the record player in every room. My teenage daughter got a kick out of learning how to spin the needle. As we unpacked, we jammed out to the Justin Timberlake album in our room. We did our best to match the energy of the happy hour rockin' the pool outside our door.

Sadly, we didn't see anybody famous walking around downtown Santa Barbara later that evening, touring the Old Mission and Paseo Nuevoa, an assortment of upscale shops. Hunger pains led us to Finch & Fork, the restaurant of the downtown Kimpton Canary Hotel. Our waiter described the menu as "exotic" comfort food. It was nice that such a trendy restaurant had an easy-to-please children's menu. Not many do. The house specialties - the Macaroni & Cheese appetizer with bacon and bread crumbs and short rib entrée - most definitely killed it.

Next time we come back, a city trolley tour, the Stearns Wharf and harbor and the Urban Wine Trail rank high on the to-do list.

The next morning, the switchbacks on the 12-mile drive up California Highway 154 through the Santa Ynez Mountains offered cool views of the coast. The Rancho San Marcos Golf Course, a Robert Trent Jones Jr. design from 1998, roams the Santa Ynez River Valley floor on the other side.

Thankfully, a rare frost delay didn't derail a beautiful day. By 8 a.m., the sun was roaring as it so often does in the canyons off the coast. Signs throughout the course and on the cart serve as reminders of the dangers of the wildfire raging elsewhere in the state. The fairways, burnt from a scorching summer, were brown, yet still perfectly playable.

The 6,939-yard, par-71 routing by RTJ Jr. couldn't have been more enjoyable. Six par 3s, five par 5s and one short par 4 from the manageable 6,278-yard white tees (plus one less stroke to par) helps most players beat their handicap. The forested setting, with no homes or roads, is such a great contrast to the hustle and bustle along the ocean.

Back at the Goodland, its 60s-inspired restaurant, The Outpost, served the perfect casual meal. Dining on the outdoor patio reminded me again how much warmer the fall evenings are in SoCal compared to the Bay Area. They're just about heaven. Plates of gourmet nachos, fish tacos and a burger couldn't stop my wife and I from splurging on the fried carrot cake for dessert. Don't judge.

I'm not a morning person, although catching a sunrise at 7 a.m. at the Sandpiper Golf Club sure made me feel alive. It doesn't matter where you're standing - the parking lot, the clubhouse patio, the first tee, in a bunker - you can still see the Pacific Ocean.

It's hard to believe such a beautiful site was previously an oil refinery shelled by a Japanese submarine in 1942. The only reminders of that bygone era are the platforms visible off the coast. Management is trying to return Sandpiper to its more linksy origins when architect William F. Bell built the 7,159-yard course in 1972. Trees have been cut down, and native areas off certain fairways remain in a state of transition.

With a peak rate of $200, Sandpiper gives golfers the ocean in spades for a discount compared to California's other Pacific playgrounds. If you're comparison shopping, consider the fees for playing Pebble Beach Golf Links ($525), Spyglass Hill ($395), the North and South courses at Pelican Hill ($310), the North ($195) and South ($305) courses at Torrey Pines, Trump National Golf Club Los Angeles ($280), The Links at Spanish Bay ($270), Monarch Beach Golf Links ($259) and the Ocean and Old courses at Half Moon Bay Golf Links ($250).

Scruffy conditioning in spots and a few okay inland holes justify the savings. The characteristics that matter most to me - lightning-fast greens and world-class ocean holes - are nothing short of spectacular. The seaside stretch from no. 10 (a sweeping, dogleg-left par 4 ending at an infinity green) to no. 13 (a par 5 climaxing at a cliff-top green above a hazard) delivers hole variety, shot strategy and views as good as anywhere on the West Coast. The round ends on a par 3 over a pond, a rare instance of a highly regarded course ending on a par 3.

Leaving such a gorgeous setting behind was tough, but I knew my first trip to Santa Barbara most definitely wouldn't be my last.