ONSET, Mass. -- Tom Tobey swears that nobody ever goes low at the Bay Pointe Club, despite its lack of length.

Then Tobey, the club's director of golf, shares the story of the sparkling 60 he shot roughly six or seven years ago to set the course record. Tobey's magical round included nine birdies, an eagle and one bogey on the 6,201-yard, par-70 course.

With six par 3s and two short par 4s, Bay Pointe Club seems to be ripe for the taking, but it rarely happens. Low scores tend to be derailed by long par 3s, rolling topography, 38 bunkers and two ponds.

"We've had a lot of tournaments and a lot of good players play here. You'd be surprised (what the scores are)," Tobey said. "Even (par) or one-under is usually the low round."

Bay Pointe Club opened in 1964 as the Warham Golf Course designed by Geoffrey Cornish, a legendary architect in New England. Its location is ideal for golfers coming from Cape Cod or heading toward this iconic summer destination.

Warham's name changed with new ownership in 1990. What hasn't changed is the natural setting where housing interrupts only a handful of holes. Ironically, one of them is its best, the par-3 seventh hole. This 102-yarder is the only par 3 less than 189 yards, but length isn't the issue. Weeds and water, along with two front bunkers, surround an island green. It can play tricks with players.

"A lot of people don't know how to hit a 90-yard shot," Tobey said. "They decelerate and hit it fat. A lot of people have a hard time with that shot. It is not too inviting."

Thankfully, forgiving shots come prior and immediately after this signature shot. The 283-yard, par-4 sixth is certainly drivable, and the 227-yard, par-3 eighth falls gently downhill off an elevated tee.

Brian Thomas, a golfer from Dartmouth, Mass., said he always has a good time when he plays Bay Pointe.

"It's a different layout than anywhere else I've seen," he said during a round this summer. "There are short holes and long holes. ... It has a fun rhythm."

The toughest holes at Bay Pointe come right out of the gate. A rolling fairway and elevated green accompany the 465-yard second. The 452-yard fifth doglegs hard left around a fairway bunker.

The operative word about playing golf at the Bay Pointe Club is fun. With six par 3s, golfers get a couple extra chances at a hole in one. It's one of the best values of golf on or near Cape Cod. 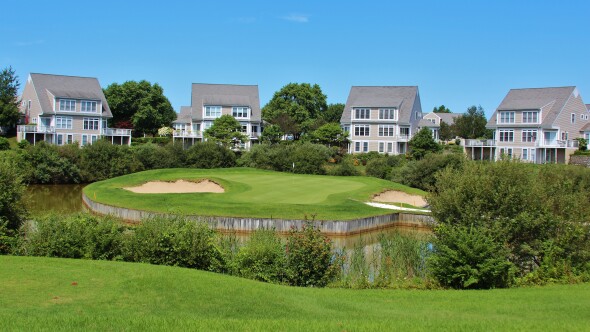 Galleries
Short but sweet defines The Bay Pointe Club in Onset, Mass.
With six par 3s and two short par 4s, The Bay Pointe Club in the "Upper portion" of Cape Cod seems to be ripe for the taking -- but that rarely happens. A unique mix of long and short holes might allow a birdie one moment, then steal the strokes right back.
8 Images 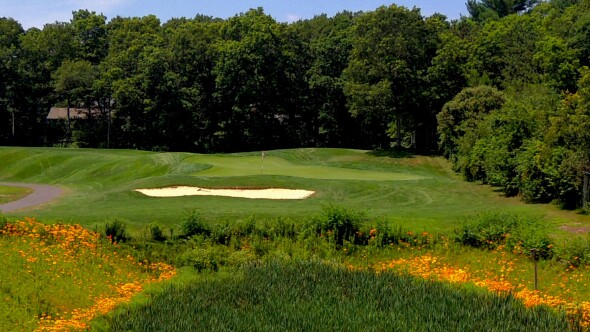