Playing golf with the architects opens up a different perspective 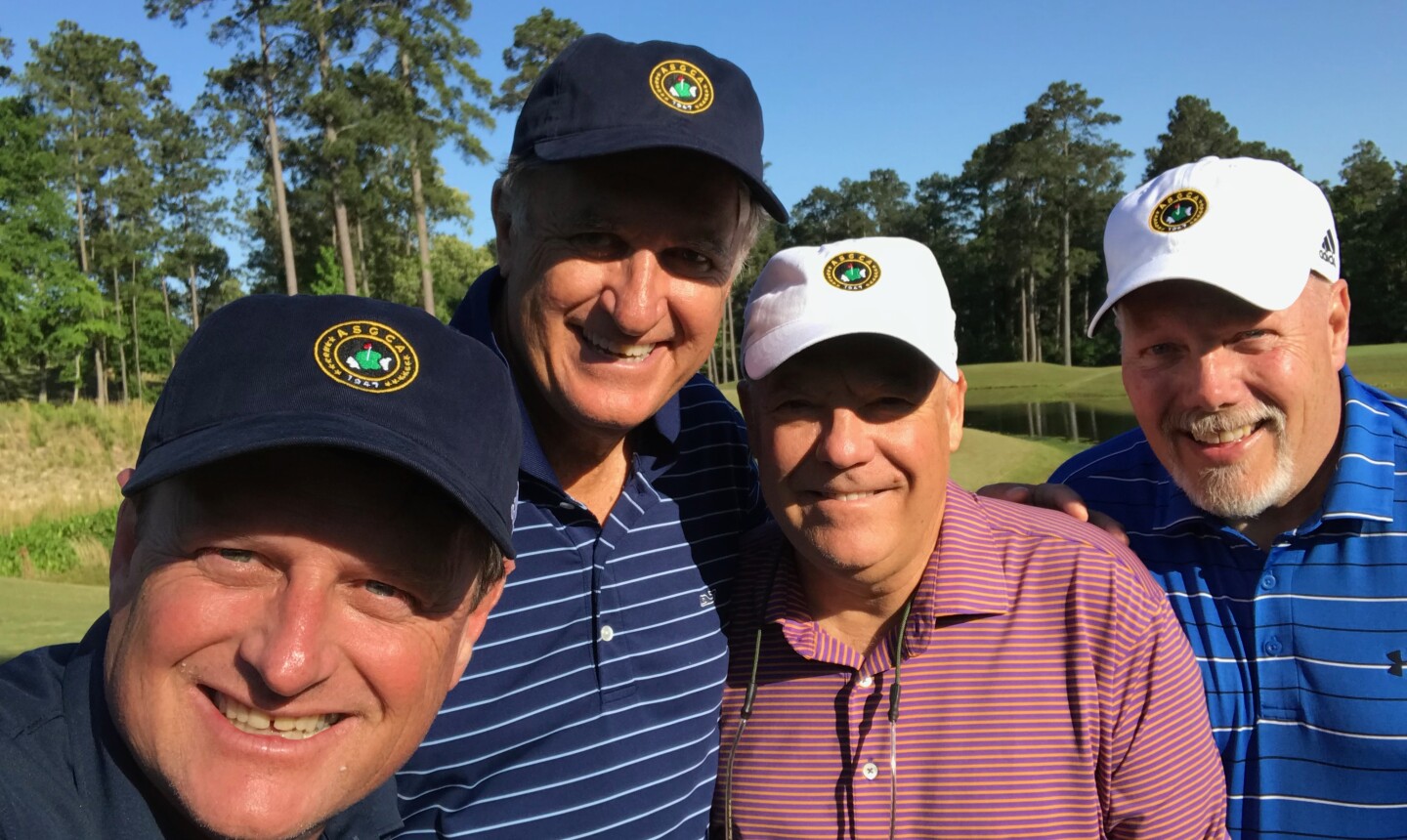 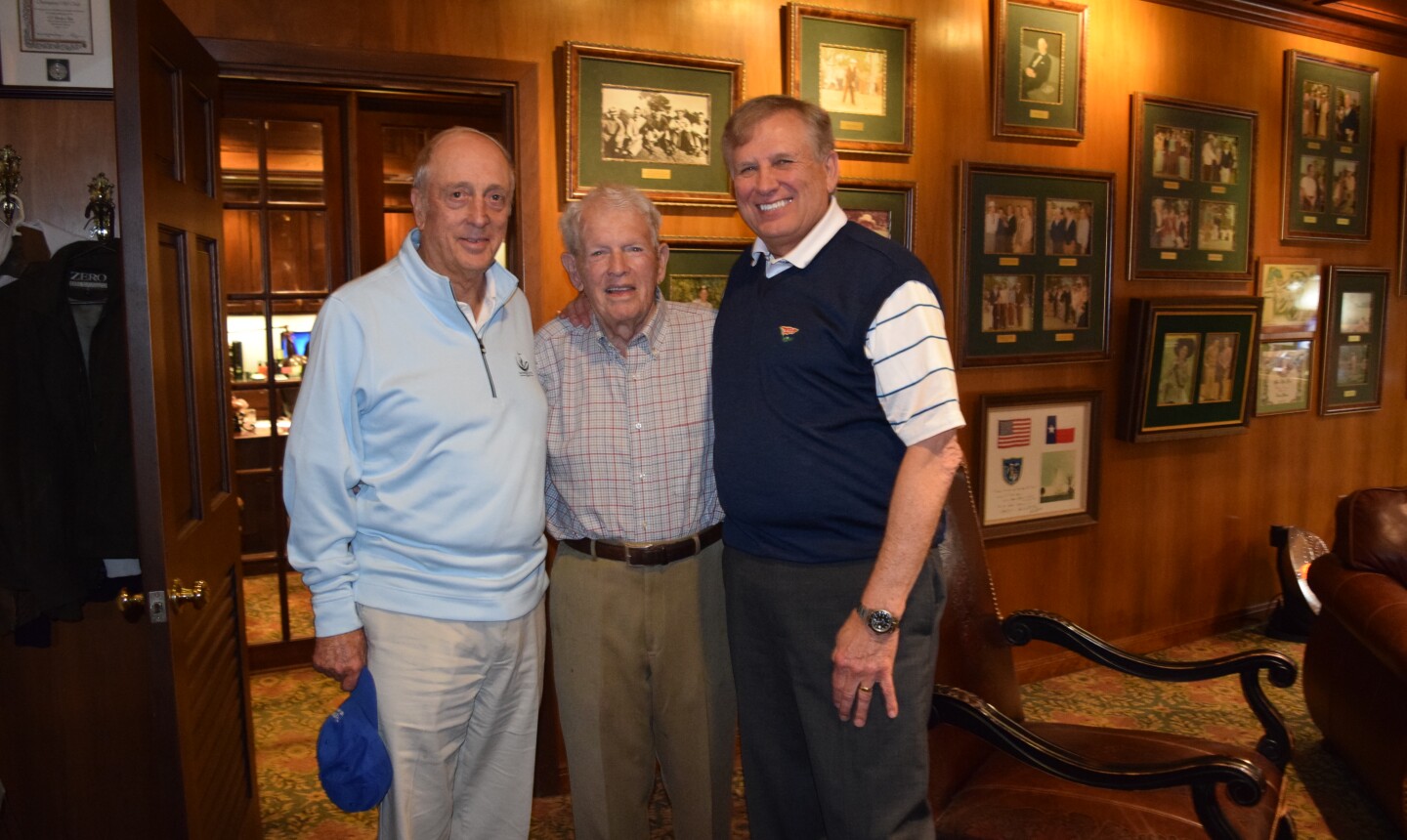 Members of the American Society of Golf Course Architects had the opportunity to visit with former Masters and PGA Champion Jack Burke Jr., last week at Champions Golf Club in Houston. With him are Rees Jones (left) and Michael Hurdzan. Courtesy of Jan Beljan/ASGCA 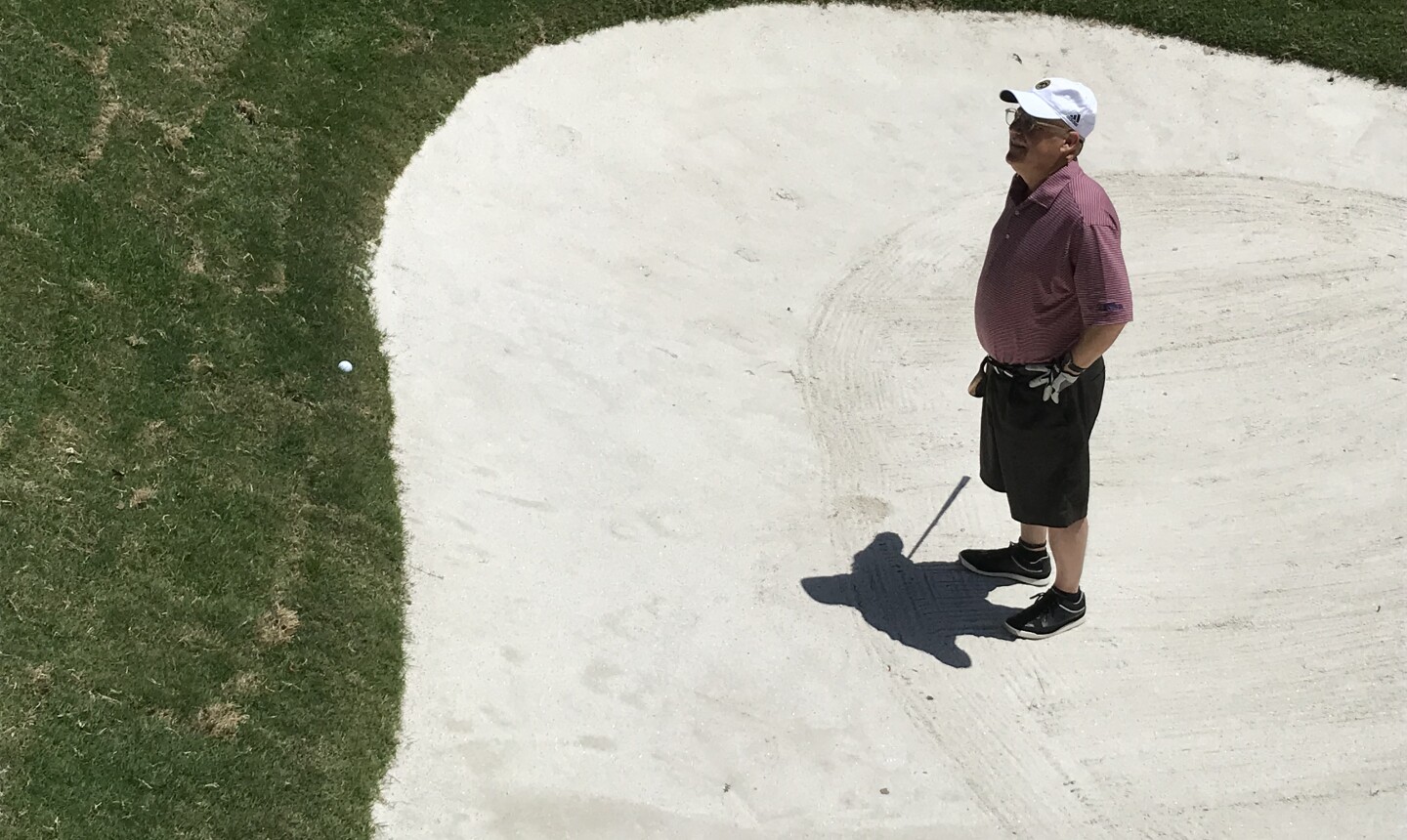 No doubt, Forrest Richardson is thinking about Jeff Blume's bunker design during a round at Grand Pines Golf Course at Bentwater Country Club during the ASGCA's annual meeting near Houston. Mike Bailey/Golf Advisor

For example, we were well into the first nine holes on the Cypress Creek Course at Champions Golf Club in Houston when Chris Cochran pulled out his phone and laid it on the green next to the hole.

"It's between 4 and 5 percent," he said with a smile, looking over to his cart partner, Brian Huntley.

Cochran was using a level app on his phone to measure the slope of the green, He was amazed because the greens were at least 12 on the Stimpmeter after superintendent Chris Ortmeier announced earlier that morning that they were freshly cut and rolled for the last time before undergoing renovations that began after our round.

In other words, that pin position was difficult, especially at Champions, where greens average close to 10,000 square feet. At that speed and that slope (most puttable slopes are between 1 to 2 percent), it meant that if you missed the hole, get ready for an 8- to 9-footer comeback. And yes, we all had those long comebacks. Maybe Ortmeier was messing with us a little.

So by now, you might be guessing Cochran is a fellow superintendent. It's a good guess, and Cochran certainly knows their value, especially in preserving his work. He is in fact, a golf course architect, one of dozens who gathered in the Houston area last week for the annual meeting of the American Society of Golf Course Architects.

Part of the week's ASGCA activities included three rounds of golf in varying formats. It's a chance for the architects to reconnect and compare notes in a relaxed and sometimes competitive atmosphere.

As my colleague Brad Klein, who also attended last week, pointed out in this piece, it's one of the most exclusive and yet inclusive groups in the world. Membership requirements are stringent (you have to be an architect with notable credentials who is voted into the organization), yet despite these guys (and gals) being competitors, they support each other with ideas and common goals.

They love their work, but it's a tough business, especially now when new construction of golf courses in the United States is almost at a standstill (most new course work is occurring overseas, especially Asia). And it can be quite demanding, as architects often find themselves away from home months at a time at a site, working seven days a week, 12 hours a day. Yet, this was an easy-going group on the golf course. They, perhaps more than most others, appreciate the opportunity to play the designs they work so hard to create.

They also have great admiration for those who came before them, honoring the great figures of the past, as evidenced by the prestigious Donald Ross Award, which they presented remotely to President George H.W. Bush at this year's Donald Ross Dinner. And they love to educate each other about the legacies left behind by their predecessors. We got a little of that before the first round of golf.

The first day of competition began with a breakfast at Champions. It featured a few speakers and a special guest. In one example, ASGCA past president Jeffrey Brauer enlightened us with stories of the Cypress Course's architect, Ralph Plummer, who had a substantial career designing courses, 83 of them to be exact, in a half-century career that began in the 1940s, with 75 of them in Texas.

"You couldn't go down the street without running into one of them," said Brauer of Plummer's designs in Texas. "They were like 7-11s or something."

We learned that morning that Plummer was a man of few words, unless he was talking about golf, that he didn't draw out his designs on paper, and that he cut his teeth with classic architects like John Bredemus and Perry Maxwell, where he got his start as a construction foreman on projects like Colonial Country Club in Fort Worth, Texas.

"He also talked about the pros hitting the ball too far, even then," Brauer noted. "His solution was to narrow the fairways and grow the rough."

Also, on that Monday morning at Champions, members had the opportunity to meet Jack Burke Jr., one of the co-founders of Champions who hired Plummer 60-plus years ago when the club was founded. Burke, who won the 1956 Masters and PGA Champion, welcomed each member into his office, which is chalked full of memorabilia, including his green jacket. One by one, they all took their turn before heading out to the course, appreciating the opportunities of the day.

Architect Forrest Richardson said he was struck by the history at Champions.

"Robert Trent Jones, Sr. was reported to say that there are two ways a course becomes famous -- one is driven by the course itself and its setting and design, the other is by what took place across its fairways," Richardson said. "I think Champions a bit of both, perhaps mostly by the Jackie Bruke, Jr. legacy and what Mr. Burke infused into the grounds."

As we prepared for that day's round, I couldn't help but notice the collective knowledge concentrated on one practice green. From the likes of Brauer and the Jones Brothers – both Rees and Robert Trent Jr. – to folks like Tripp Davis, John Colligan and incoming president Jeff Blume, I could only wonder what they were thinking. I would soon find out.

While they are like most of us in that that they'd like to play well, it is difficult for them not to critique and certainly admire the designs when playing a round of golf. My group was amazed at the size of the greens and noted how much bigger they would be again after the renovation would reclaim the areas that had shrunk over the past few decades.

After Champions, we played Grand Pines at Bentwater Yacht and Country Club about 50 miles north of Houston. Designed by Blume, it's a course devoid of homes, and I've always enjoyed playing there. That day, playing with Gary Linn, Richardson, and Lee Schmidt (formerly of Schmidt-Curley design) I couldn't help but note their observations on catch basins, the routing, the bunkers (which were just renovated) and in particular, the mounding on the edges of the fairways. Richardson loved the terrain, which gives the course some elevation change not typical to the Houston area, and the way the course flowed. And they all took note of Blume's style.

"You can certainly see von Hagge's influence with Jeff," said Schmidt, referring the fact that Blume began his career working for Robert von Hagge, the late Texas-based architect known for his extreme mounding. (Von Hagge designed the Tournament Course at The Woodlands Country Club, home of the PGA Tour Champions' Administaff Classic, as well as countless other courses in Texas, Mexico and beyond.)

Schmidt, who got his start working for Pete Dye (PGA West and Mission Inn, for example), said he might have done a few things differently at Grand Pines – like go easy on the mounding in the edges. But that is, in essence, what's great about these annual meetings. Golf course architects aren't afraid to give their peers criticism or praise, and they generally don't take it personally. And architects, more than anyone, know that there are all sorts of factors that go into a design, such as the environment, budget constraints, and most importantly, the owners' personal wishes.

As golfers, we don't usually take those factors into account. More importantly, as Cochran pointed out during our round at Champions, after a golf course is built, it's out of their hands. The superintendent then becomes their best friend or in some cases, not so much (and even then, it may be budget, not the superintendent's lack of expertise that leads to a golf design looking shabby). Last week in The Woodlands-Houston area, the superintendents certainly did their best to make the designers look good, and that certainly didn't go unnoticed.