Which Island is Right For Your Hawaii Golf Vacation? 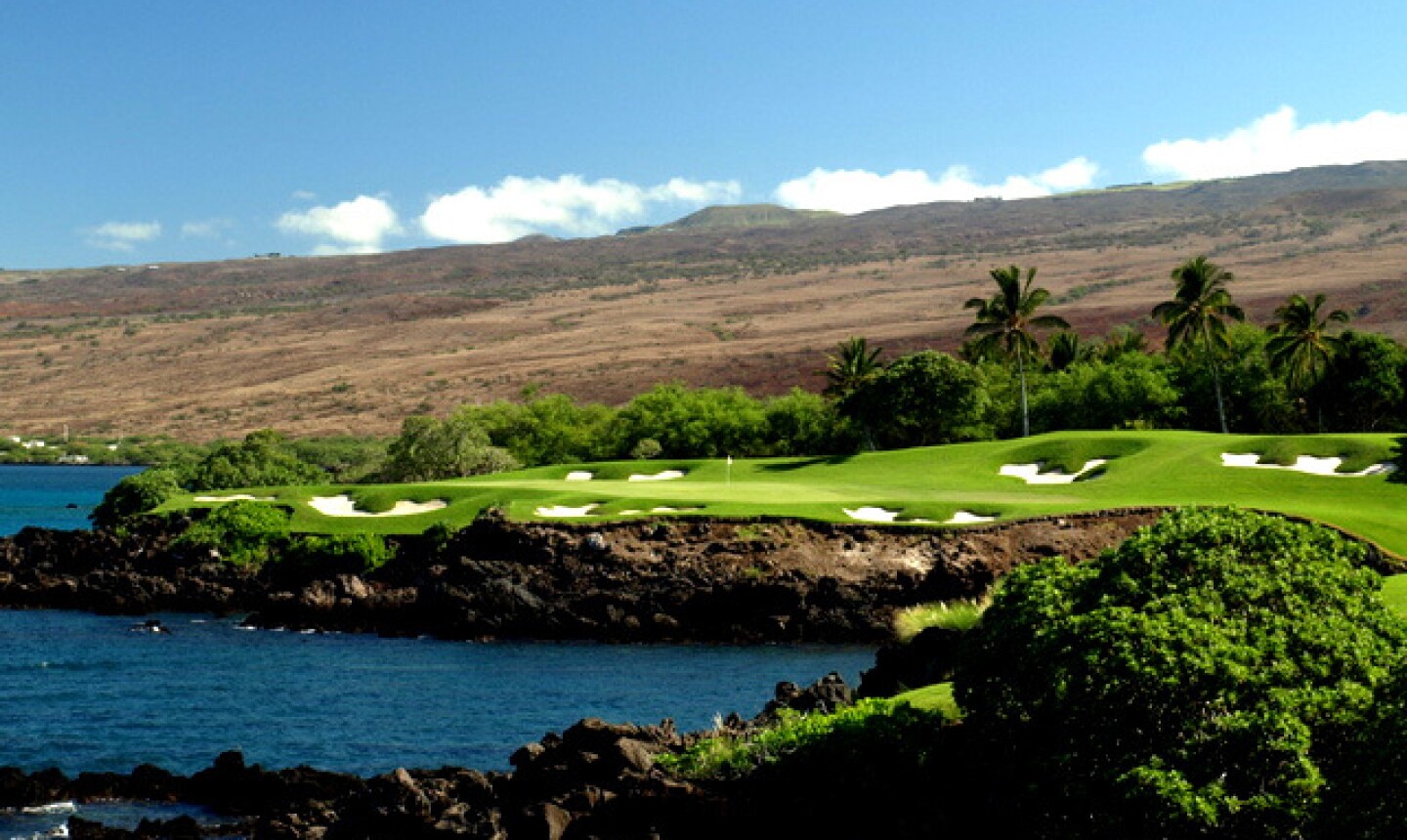 Hawaii is an amazing, mysterious place. And given its arrangement as a tropical archipelago, each island has its own character and charms, especially when it comes to planning a Hawaii golf vacation.

That means that when it comes to the Aloha State, you have to do a little extra homework. Depending on what sort of group - family, buddies, etc. - and budget you're traveling with, and what level of relaxation and seclusion you seek, one of the five (out of eight total) Hawaiian islands with golf courses may be a considerably better fit than the others.

First, a note on flights

Of Hawaii's five islands with golf courses - the Big Island, Maui, Oahu, Kauai, Lanai - only Lanai does not have a commercial airport with nonstop flights from the West Coast. But if you're looking for nonstop flights to Hawaii from cities like New York or Chicago, you'll have to fly to Honolulu and go from there, if your destination is one of the other islands. Numerous airlines serve the Hawaii's airports from the western half of North America, including Alaska Airlines, which is often overlooked in favor of the bigger airlines but is a great option, especially if you're traveling to Hawaii from the West Coast.

When people call it "the Big Island," they're not kidding. Not only is it larger in land area than all the other Hawaiian Islands put together, it also features the biggest diversity of scenery and climate on any of the islands. In fact, of the 13 main climate zone types found on Earth, 11 of them exist on the Big Island. That includes snowy mountain peaks, like that of mighty Maunakea. Hawaii Volcanoes National Park is here as well.

Known as "The Valley Isle," Maui is the second-largest Hawaiian Island, but with a population around 130,000, it is more sparsely populated than bustling Oahu. Still, its extensive array of luxury resorts causes some visitors to remark that it has a somewhat "touristy" feel. That said, it is home to Kapalua's Plantation Course, the Bill Coore/Ben Crenshaw layout that hosts the Hyundai Tournament of Champions each year. And for aficionados of building architecture, the Frank Lloyd Wright-inspired clubhouse at the private-but-accessible King Kamehameha Golf Club is a pilgrimage destination.

Home to the Hawaiian capital city of Honolulu, Oahu is the third-largest Hawaiian Island but home to about two-thirds of the state population. It's perfect for those looking for a cosmopolitan experience in Hawaii, and is the place to find a huge variety of off-course experiences and activities, including the must-visit Pearl Harbor remembrance site. The golf is not the highest-quality in the state, but for those not looking to lay out too much cash, it is probably the best option due to the convenience of Honolulu's airport relative to the others in Hawaii. But if you are looking to be swallowed up by the jungle and sand in Hawaii, you will no doubt find Oahu a bit jarring.

Known as "The Garden Isle" Kauai is the destination for those looking to explore Hawaii's rainforests. Indeed, some part of the island receive more than 400 inches of rain per year. However, some of the western coastal portions of the island receive less than 20 inches. For golfers, this means lush turf year-round, and a solid roster of courses, even if the island's highest-rated layout, Princeville's Prince Course, is now going private. However, Wailua Golf Course, a municipal layout with numerous holes with ocean views, remains one of the best values in golf.

If Oahu is Hawaii's party central, Lanai is the polar opposite. Formerly the pineapple-growing domain of Dole, it is now owned almost entirely by tech company Oracle CEO Larry Ellison. This makes it the most mysterious and sparsely-populated of Hawaii's main islands (Kahoolawe is used as a Navy Bombing Range, Niihau and its roughly 200 residents are largely off-limits to tourists and Molokai has no golf courses), with only 30 total miles of paved roads. It is Hawaii's quietest island by far, and the one where pure relaxation and seclusion are the most easily attainable, but at a hefty price. (Note: Lanai is accessible by fast ferry from Maui, but in order to play golf there, you need to stay at the Four Seasons.)

Ideal for... Visitors looking to drop off the map, the budget-unconscious, anglers, 4-wheeler riders, dolphin watchers

What are you looking for in a Hawaiian golf vacation? Let us know below in the comments!

As of February 1, 2016, Manele will be closed to the public unless you are a guest of the Four Seasons. The day I played, mid January, there were 40 golfers on the course. They anticipate that after February 1st that the course will have 20 golfers per day due to the restriction. Never saw anyone in front or behind us the entire round. The course was in immaculate condition &amp; the vistas are spectacular! I've played Pebble and many of the courses on Maui &amp; Manele is far beyond all of the others!

Just a few thoughts for those looking for less expensive golf. On the Big Island, the Big Island Country Club, though not in great condition, is a really good layout. It's a bit of a drive to get there fro anywhere, but worth the drive.
On Maui, you can keep the green fees down by playing Kahili, Maui Nui, The Dunes at Maui Lani and Pukalani. Kahili and the Dunes are excellent courses, with good layouts and challenging holes (the turn at The Dunes -9,10,11 - are a bear for anyone!). I've also played at Kaanapali and Kapalua, and though in better condition, they are not significantly better layouts for the difference in price. Have not played the Plantation unfortunately.

If you make arrangements through your local club pro, Hokulia on the Big Island is absolutely spectacular. Reminds me of National on Long Island with 17 great holes and one green you'd like to remove. A Nicklaus design that you won't recognize as one of his designs, every hole is different, challenging and some special green placements can make it a great day. I'd rate it as the #1 course on all the islands. The staff is exceptionally welcoming as well.

Just came from Maui and Oahu great vacation and i play on the Kahili golf course great lay out with great view from the ocean and the mountain tough green if you compare to Quebec Can . We visit the Kapalua on Monday before the big show and let me tel you that the green and fairway was in great condition and to top my wonderfull experience we saw Brooks Koepka pratice he was alone on the green ! Wow

It seems more and more courses are turning private. Is that true nationally?

I played the prince course numerous times. I am surprised and disappointed that this course is going private. I guess those rich bastards decided enough is enough of rubbing elbows with vacationers of a certain ilk. This resort should be ashamed . I always looked forward to playing this layout,now it is being turned into private la la land.
Disgrace is putting it mildly.

I agree with Joey regarding #12 at Manele...I almost aced it. (Played as a single, saw almost no one on the coarse...I felt like Larry Ellison for 4 hours!)

I just stayed in Maui at Grand Wailea and played Wailea Gold course twice, Kapalua Plantation, and took the ferry over to Lanai and played Manele. Wailea Gold course is the old home of the Senior Skins game and it is a nice course, but I would rate it the least remarkable of the three I played. It is very playable, but there is only 1 hole that provides what I would call a "picture postcard" moment, and that is the 8th hole, par 3, down hill staring at the ocean.

I was so excited to play Kapalua because of the views you see on TV, and I would say it did not disappoint. Many holes provide incredible vistas, including the view from the 1st tee and fairway, the 5th hole is a nice risk/reward par 5 that requires a 200+ second shot over a deep drop off to a green that runs away from you, the views from the 7th fairway and 8th tee box are incredible, the par 3 11th is also an awe inspiring view with surfers in Honolua Bay in the background, the 2nd shot on 17 and the whole 18th hole make you want to never stop playing the course. And to have a drink in the clubhouse overlooking all of the vistas including everyone coming down 18 is very cool. All that said, I played both Wailea Gold and Kapalua before I went over to Manele.

In my opinion, Manele has the others beat hands down. It may have been because I was there when the Ritz was shut down for renovations so there was only a handful of people on the course, but the greens were less grainy, the staff catered to every request as if I was the most important person in the world, and almost every hole has incredible views, with the most memorable for me being the par 3 12th, where you hit 200 yards completely over waves breaking below down a 100 foot cliff. It was spectacular. Then the lunch after on a porch overlooking the ocean is also quite memorable.

On lanai The Lodge at koele is closed with no date to reopen. Koele Golf course reno is on hold. Manele bay hotel is scheduled to reopen march 1. There is considerattion being given to not allowing golfers at manele course unless you are a hotel guest. So daytripping from maui may no longer be an option for golfers. Best to check first. 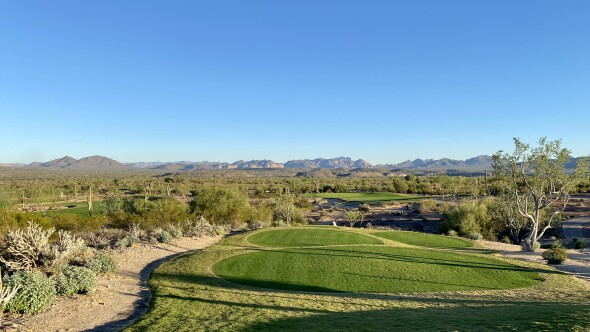 Articles
5 Min Read
‘Desert golf’ vs. ‘golf in the desert’: A first-timer’s look at Phoenix-Scottsdale
Surprising variety and spectacular scenery define the Valley of the Sun for golfers.

Tim Gavrich
Senior Writer
Now Reading
Which Island is Right For Your Hawaii Golf Vacation?
Search Near Me