Ties to USGA and a location at the crossroads of American golf make perfect sense.

Along the edge of a lagoon with towering fountains at either end sits a synthetic turf platform next to a stone marker emblazoned with the words “CHALLENGE GREEN” and “132 YARDS.” That distance away sits an abandoned island of weedy grass and dirt that used to be a replica of the famous par-3 17th hole at TPC Sawgrass’ Players Stadium Course, home of the PGA Tour’s flagship tournament, The Players Championship.

That particular gimmick, now an eyesore, has come to symbolize the existing World Golf Hall of Fame's noble but never-quite-right existence, set just off busy Interstate 95 near St. Augustine, Fla. An April tour of the Hall of Fame revealed that while the space contained a quite impressive array of important golf memorabilia and some interesting exhibitions, it never achieved the gravitas that other major sports' Halls have.

In hindsight, this spring's enshrinement ceremony for Susie Berning, Marion Hollins, Tim Finchem and Tiger Woods told it all. It took place not in St. Augustine, but at the Tour’s gleaming, state-of-the-art new headquarters in Ponte Vedra Beach. To decline to induct the Hall of Fame’s marquee name at the Hall of Fame’s actual location raised concerns about its future. Last week, those concerns received answers.

Baseball lovers refer to their hall of fame by its location: "Cooperstown." That mononymous approach never felt quite right with St. Augustine, but it will work for Pinehurst, because Pinehurst already means so much to golf and golfers. The game has been played there as long as just about anywhere else in the United States. Golf got going in 1897 and has gradually become the central draw not just for the resort, but practically all of surrounding Moore County ever since. There is no substitute for the immersive golf culture of St. Andrews in Scotland, but Pinehurst lives and breathes golf more deeply than any other American location.

That golf DNA just grew a little stronger. Last week's announcement that the USGA's new Golf House Pinehurst location will also include the World Golf Hall of Fame's relocation to North Carolina adds two more compelling reasons to truly regard the area as the "American Home of Golf," as it has styled itself for several years. World Golf Hall of Fame induction ceremonies in 2024 and 2029 will happen in Pinehurst to coincide with the U.S. Opens and U.S Women's Opens held in those years, turning those weeks into even larger meetings of the golf industry than originally anticipated.

Per the joint announcement by the USGA and the World Golf Foundation, which will continue to administrate the Hall of Fame from its new home, the most compelling aspect of the current World Golf Hall of Fame is expected to reappear in its new digs: a "locker room" that honors every inductee and includes artifacts and references to every golf great's achievements. This locker room will sit a floor above the USGA's own exhibition space at the new USGA Experience building that will be part of its new Pinehurst complex.

"We look forward to celebrating the greatest moments, and golf’s greatest athletes, by including the World Golf Hall of Fame as an important part of our new Pinehurst home," said USGA CEO Mike Whan. "[T]ogether with the Hall of Fame, we’re more committed than ever to delivering experiences that build even deeper connections between golf fans and those who have truly led the way in this great game."

I have been to the original HOF in Pinehurst and to St Augustine. It will be great in Pinehurst village again. I look forward to seeing the new one.

Good news for golf in the Carolinas...

And many thanks for your coverage of the USGA's inaugural Adaptive Open at Pinehurst last week. This was a great event and should serve as a model for inclusion of golf in the Paralympic Games at Los Angeles in 2028 (or possibly Paris in 2024) 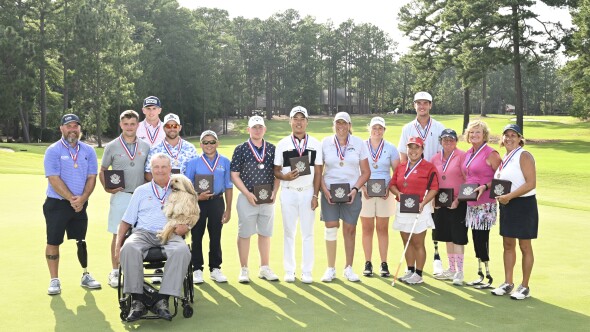 Articles
2 Min Read
Honoring some of the game's most inspiring stories is a Cool Golf Thing
The inaugural U.S. Adaptive Open was an emotional experience for competitors and fans of the game.