Developer of Pasatiempo and Cypress Point, Hollins forged a path followed by Alice Dye and others.

Barely one out of every four golfers is female, and women are even more sparsely represented in the fields of golf course design and development. The vast majority of golf's builders - architects, shapers, financiers, developers, club pros, equipment reps - are men. The game has long held women at arm's length at best, more often treating half of the world's population as an afterthought.

Women have had to fight hard to make inroads in the game. Those who do often take to it in spite of sexist comments and intimidating behavior. The golf world is finally starting to reckon with this unnecessary and shameful aspect of the game's history, making both symbolic and concrete gestures toward fostering greater equality of opportunity and respect within its ranks. Epson's infusion of millions of dollars into the LPGA Tour's feeder tour is a good start, as is the USGA's commitment to bringing the purse of the United States Women's Open into closer alignment with that of the U.S. Open in the coming years.

It is also important to foreground the contributions of golf's remarkable women when the record needs setting straight. This week's PLAYERS Championship and Wednesday's World Golf Hall of Fame induction ceremony pair perfectly with this month - Women's Golf Month - for the chance to recognize two women who have made colossal contributions to American golf: Marion Hollins and Alice Dye. These two women helped design two of the most famous holes in golf - the 17th at TPC Sawgrass and the 16th at the Cypress Point Club. How's that for a lasting impact on the game?

Hollins will receive a long-overdue posthumous honor: induction into the World Golf Hall of Fame alongside Tiger Woods and others. The daughter of a Wall Street broker, Hollins grew up in the classic golf hotbed of Long Island, New York. At 20, she was runner-up at the 1913 U.S. Women's Amateur, a tournament she would finally win in 1921.

Two years later came Hollins' first foray into golf course design and development. Inspired by the National Golf Links of America on Long Island's East End, Hollins founded the Women's National Golf & Tennis Club in the town of Glen Head, on the North Shore of the island. Not only did she scout and secure the location, she traveled with a film crew to the British Isles to assess the greatest courses overseas at the time in order to transplant their concepts back to America. Hollins also recruited a vibrant membership for the club and oversaw construction of the course, whose architects included Devereux Emmet, C.B. Macdonald and Seth Raynor.

Though Hollins' initial club concept did not abide forever, the course she built still exists as Glen Head Country Club. But it was in California where Hollins made her most notable marks on golf. While Samuel Morse was turning the Monterey Peninsula into golf heaven, Hollins convinced the eccentric tycoon to carve out 150 acres for her to create a premier private club. That club: Cypress Point, where Dr. Alister MacKenzie ultimately laid out 17 of the 18 holes in 1928.

That lone outlier, Hollins' creation, was the 16th hole, the dramatic 233-yard par 3 that has graced countless coffee-table book spreads, magazines and computer screens. "I was in no way responsible for the hole," wrote MacKenzie in his famous book, The Spirit of St. Andrews. "It was largely due to the vision of Miss Marion Hollins."

Or rather, the vision and golf swing. Legend has it that in order to allay some skepticism over the viability of a hole on that particular piece of hallowed coast, Hollins smashed multiple golf balls over the surf to the spot where the putting surface now sits.

Hollins' third major contribution to golf course development is much more accessible than the first two: Pasatiempo Golf Club in Santa Cruz, Calif. There, she teamed once again with MacKenzie to fashion a layout that takes full advantage of the hills and canyons that define the property. Pasatiempo is semi-private and while it is not cheap to play as a non-member, few visiting golfers come away from the experience disappointed.

Though she wasn't as directly involved as she was at Cypress Point and Pasatiempo, Hollins did become a trusted adviser to MacKenzie as he laid out Augusta National Golf Club. Her friendship with Bobby Jones helped guide him and club co-founder Clifford Roberts in MacKenzie's direction when considering course architects, and she provided invaluable feedback throughout construction.

Ninety years have passed since Hollins' productive period on the golf course development front. The Great Depression came just as Hollins' star was rising. She passed away in Pacific Grove, Calif., in 1944 at just 51 years of age. Here's hoping her enshrinement in St. Augustine helps to inspire more women to get involved with the game not just as a player, but as someone guiding its courses forward.

Among women who have had a tangible and lasting impact on America's golf course scene, Hollins' accomplishments may actually be exceeded by those of Alice Dye. Much more than merely the wife of modern golf architecture master Pete Dye, Alice was a constant collaborator, responsible for helping create courses that were not just intimidating to elite professionals but playable for higher handicappers and, especially, ladies, largely by minimizing forced carries from forward tees and leaving many greens open in front on longer holes.

Alice Dye's most famous singular contribution to golf design rivals Hollins', some 3,000 miles east. At TPC Sawgrass, while building the now-famous 17th hole, it was Mrs. Dye whose dirt-scraping direction ultimately led to arguably the most famous set-piece hole in modern golf: the heart-shaped island green. Before you brand Alice Dye a sadist, though, consider a quote from Pete Dye in his autobiography, Bury Me in a Pot Bunker:

"At the time, I didn't really think the seventeenth would be all that difficult, so I sloped the back portion of the green toward the water. Alice told me that if I left the green that way, she could envision the television announcers notifying the viewing audience that play in the [Players C]hampionship was being held up because twenty-five foursomes were still waiting on the seventeenth tee for the lead player to keep his ball on the green!"

Wisely, Pete Dye took Alice's advice, and now the 17th at TPC Sawgrass is merely intimidating, rather than over-the-top unplayable.

In his GolfChannel.com obituary for her after she passed away in early 2019, Bradley Klein wrote, "At the risk of editorializing, it’s fair to say that the only industry honor that still awaits Alice Dye is membership into the World Golf Hall of Fame." It would be fitting that, just as she followed in Marion Hollins footsteps in life, Alice Dye can someday join her in St. Augustine. 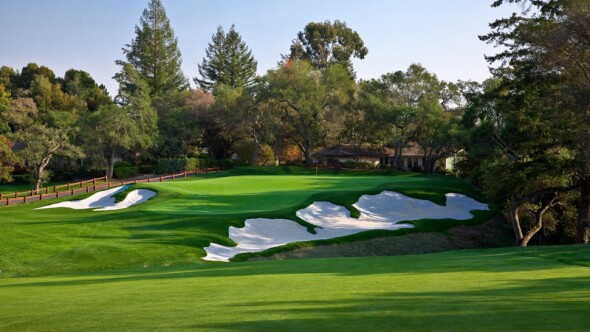