Between a Rock and a Hard Place

Ram Rock is the bad boy of Horseshoe Bay. This Ram's got some rock-hard teeth. It's a tough course with a few elevated greens that are tough to reach unless you're a long hitter. The challenge comes at the greens, many of which are guarded by hazards. It can be a ball-gobbler if you're not on your game. The Cap Rock Clubhouse, new in 2021, boasts some incredible architecture, a pool, separate pro shop, a pavilion and good food.

It's been a relentless summer in central Texas and that has to be stressful to bent grass in these parts. Ram Rock's bent greens have some wear on them at this stage of the summer. I played on the first 70s day in months, so hopefully cooler climes bring them back for fall.

Playing a bonus nine on Apple following Ram reaffirmed my belief that I think Apple is the better course for most handicaps. Greens seemed to be holding up better, too.

Progress continues to be made on the clubhouse and it appears to be on pace for a spring opening.

Ram Rock is experiencing a little construction around the pro shop etc; aka new buildings/facilities. But don't mind that because the course renovation was completed within the last year or so. Go. Play. This. Course!

The driving range holds the normal number of folks but plays to a big-ish downhill and (on this day) into a strong Hill Country wind which I imagine is often the case. But that's just what they had to work with on this hilly landscape. The putting green was in fine shape with plenty of room for a number of golfers.

One complaint (of sorts) is that the golf carts don't hold larger base drinks (e.g. big Gatorades). Some of the newer carts accommodate various sizes but these are kind of old school with the four (4) standard drink holders. But the carts themselves are new/modern/equipped and include built-in rain covers, two (2) USB ports, and soft brake system (no click). Hey, you like having a golf towel in the cart? Well the ones they provide at Horseshoe Bay Resort are probably better than the towels in your house.

That renovation money was spent improving a number of things but with the primary goal of making the course a little more forgiving for the average golfer. I've read up some on the improvements and I'm sure they helped us out quite a bit. But don't worry, there's still PLENTY of challenges awaiting you on this course with a number of well placed fairway bunkers and even more greens being protected by both bunkers and water.

I'd normally break down tees, fairways, hazards, and greens into separate paragraphs. But honestly, all of these were in excellent condition. They use normal sand for divots; I'd prefer the green stuff. The bunkers had plenty of sand but some were a little compact most likely due to the (larger) amounts of water they have to put on the nearby grass etc to keep it in such fine shape during the super hot and dry months (August in this case). The greens were soft and receptive. Man I love fixing my ball marks! I really do -- mostly because I'm not a big greens-in-regulation guy to begin with. You'll find bentgrass greens and notice the large black fans around many of them. I'm told this grass provides a smoother putting surface; I'd have to concur. A couple of the greens had a few burned spots around the edges, but it's August and hasn't really rained for six (6) weeks. The grounds crew is doing a FANTASTIC job of keeping this course in prime condition. For this time of year, we were more than pleasantly surprised at the conditions from tees to greens!

What could this course use to improve the player experience? I'd like to see some sort of large hole layout display at each tee box. You know the kind -- showing the hole, the hazards, and standard yardage for the various tee boxes. Having never played this course before, we found the GPS based golf apps on our phones very helpful in determining the hole layout, doglegs, hazards, et al. I know the members are familiar with the course, but guests of the Resort would certainly benefit from these ... and have a slightly more enjoyable round.

This is one of just a few courses I've played that don't come back to the clubhouse at the turn. Being that you don't get back to the clubhouse, there are several bathroom facilities on course. And, yes, they have air conditioning. They also have cold water, ice, and cups. They also have a snack shack of sorts after #9 that serves various sandwiches, snacks, and drinks. It wasn't open on our day of play. And I suspect it's rarely open if ever right now. You need to have a large number of players out to make it worthwhile; probably best during tournaments/outings. So prepare your drinks/snacks accordingly before playing. They did have a beverage cart running on this day; she passed us three (3) times.

Might I suggest some sort of stay-n-play package; it'll make for a great weekend with your significant other and/or fellow golfing friends.

We had the chance to be one of the first groups out on Ram Rock following its extensive renovation. What a pleasure it was putting soft and smooth bent grass greens that were blemish-free.

It was cool to see Ram Rock for the first time in about 8 years. The renovation went really well. Bunkers were rebuilt and reduced in size, while the greens were entirely rebuilt and enlarged to resemble their original sizes.

I really enjoyed the course off the tee. There are a lot of dogleg lefts, so I hope righties out there can hit a draw. In the middle of the round, there are some low-lying, very narrow holes where driver is not the play. There are quite a few elevated greens and forced carries on the approach throughout.

Ram has an infamous reputation as one of the toughest in Texas. I'd say the holes that really make the case are the par-4 3rd, a dogleg left that slopes right and goes uphill to an elevated green, and the challenging par-3 8th, which was a long shot, all carry into the wind.

The clubhouse is currently under construction and should open in the first half of 2019, along with a totally renovated Apple Rock.

This was our 2nd round out at HSB. Ram Rock was definitely my favorite course there. Despite being on the same property as Apple Rock, Ram Rock felt much more upscale. The conditions were superior from tee to green.

The layout of the course is very challenging. There are not a lot of easy tee shots or approach shots. Tee shots are very demanding. Sometimes you have small landing areas and others there are trees or things you see from the tee that give the illusion of confined landing areas. Very hard to get comfortable.

Once you get off the tee it doesn't get much easier. Many of the greens are tiny and elevated/mounded. So being short or offline at all and you end up with tricky chips and pitches.

The conditions were great though, so lies were always pretty reasonable and greens rolled very true.

This was a very enjoyable course. If you only have one round at HSB, make it here... but bring some extra balls!

One of Hill Country's Best Courses

Ben Crenshaw once said that Horseshoe Bay Resort's Ram Rock Golf Course was the hardest test of golf in Texas. Rumor is Tom Kite has never shot below 80 at the course and he hated it. Of course, both of these bits of trivia are more than 20 years old. This Robert Trent Jones Sr design is magnificent. It has held many professional and amateur events over the years and is still sought by Texan elite golfers as a stern test of golf. The opening hole is a sweeping, downhill dogleg left that reflects RTJ's signature design: BUNKERS. Great hole to start a round of golf that will have play every club in the bag. Hole #4 is an island green par three. A bunker needs to be carried to hit the green and long shots will hit a back bunker that presents a downhill play to the flag. Holes #5, #6, #8, #9, #10, #18 are championship worthy. You need to leave your ego in your car and be prepared to play every club you bring to gain a decent score here. Hard par, easy bogey indeed.

Not what I expected

When hearing about Horseshoe bay I always expected something a lot different than this course. My experience started off really good. I thought I was in for a treat with how nice the area around the clubhouse was. Than you start off playing the actual course and it goes slightly down hill from there. This course is very tight and honestly too tight. Too many holes if you barley miss it leaves you OB. The greens were also not holding anything and were very small on top of this. What leaves you coming back are the views and the overall condition of the course. Beyond the greens not holding approach shots everything was fine for the conditions. Also holes like 4 (Island green) and 6 (beautifully short par 4) leave you coming back. But other holes were just stupid and it felt like they were just squeezed in there to fit homes around it. Overall I would say for how much money it is to stay at the resort, just go somewhere else. 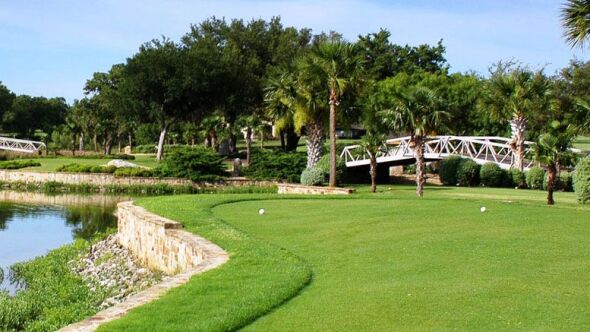 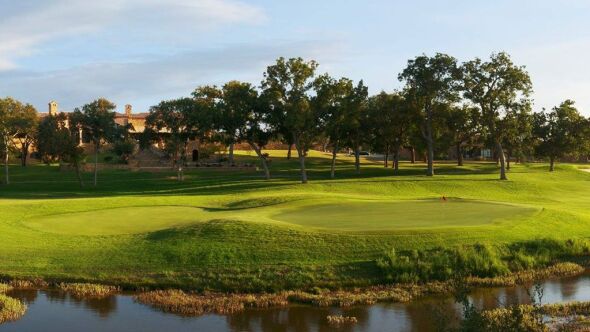 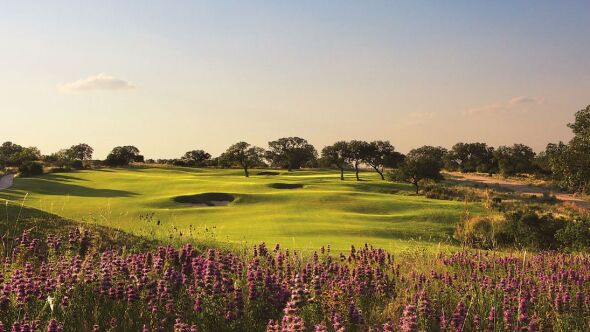 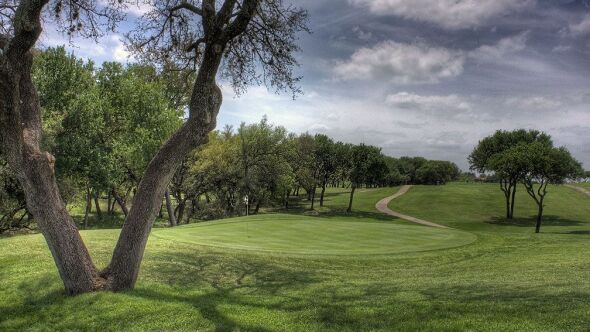 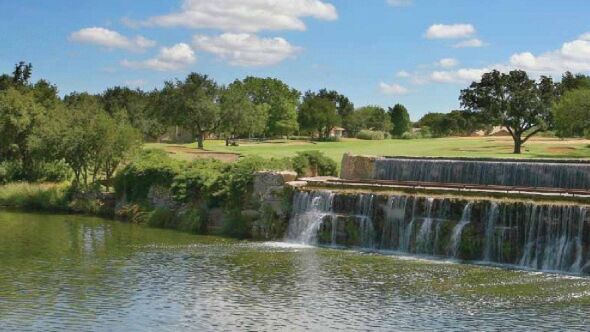 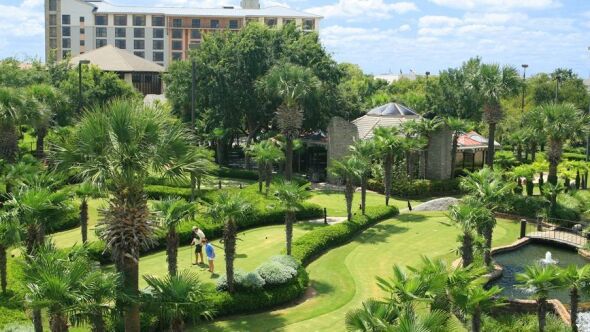 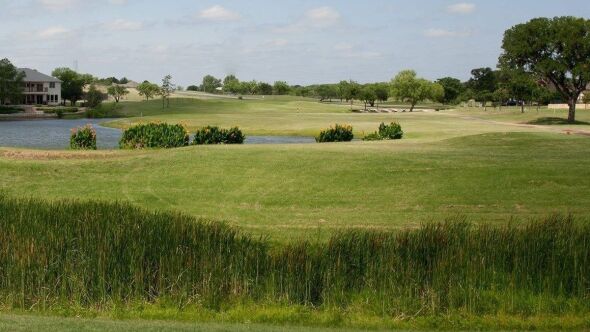 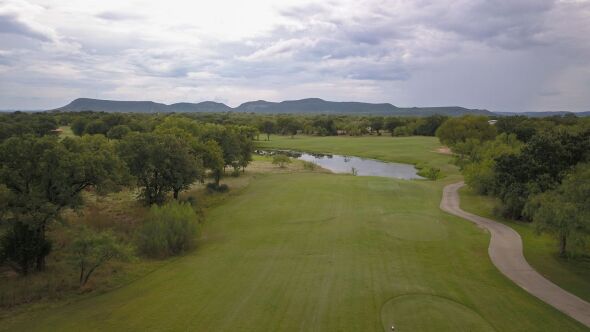 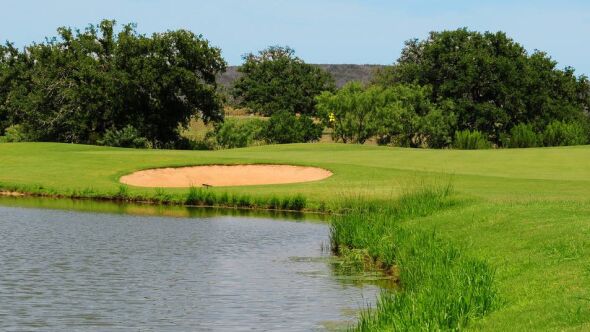 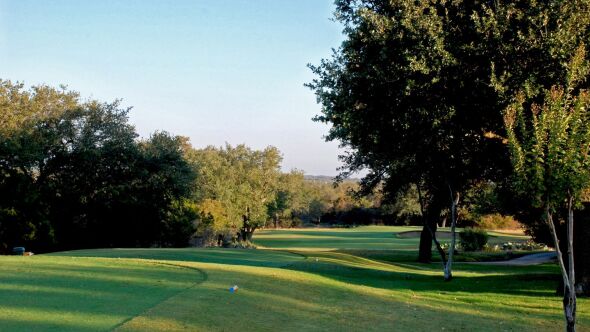 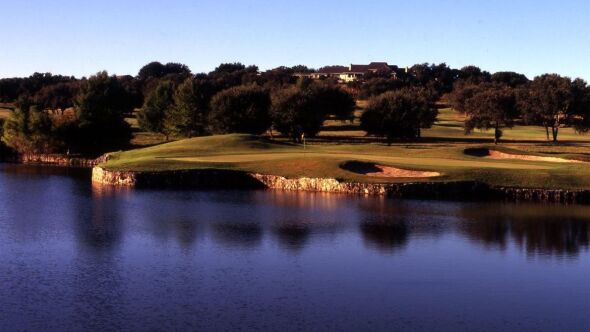 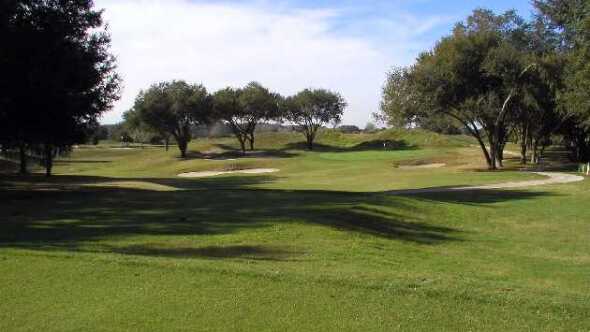 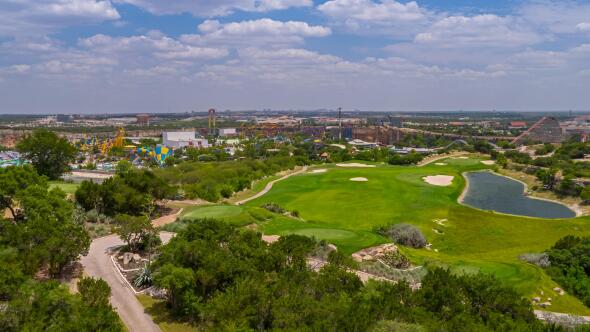 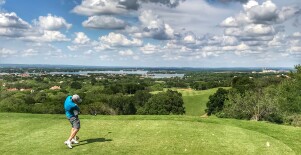 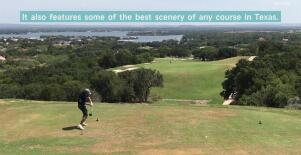 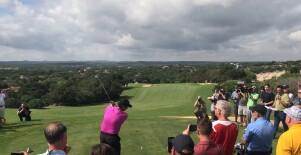 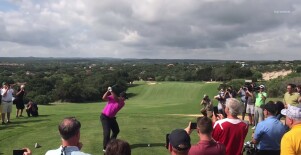 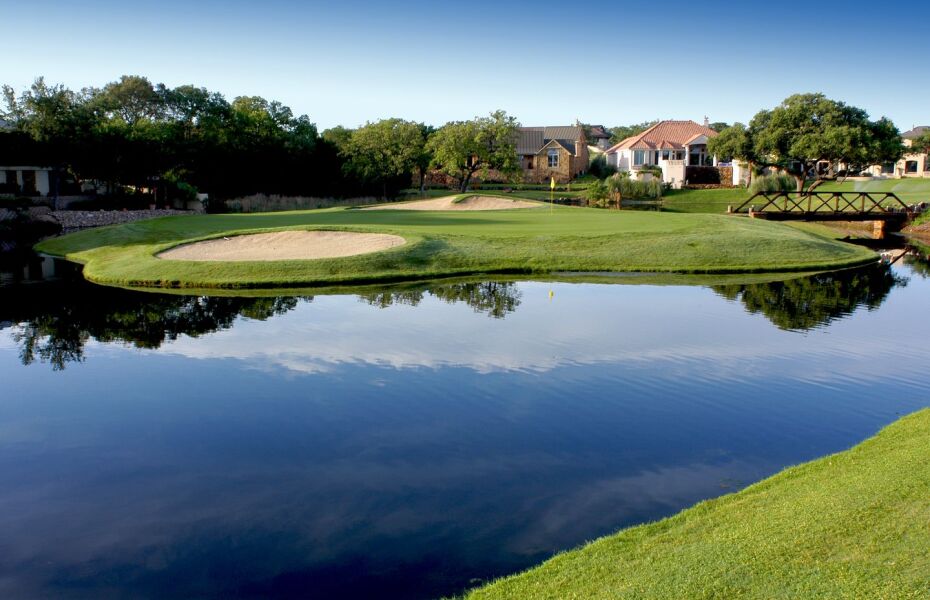 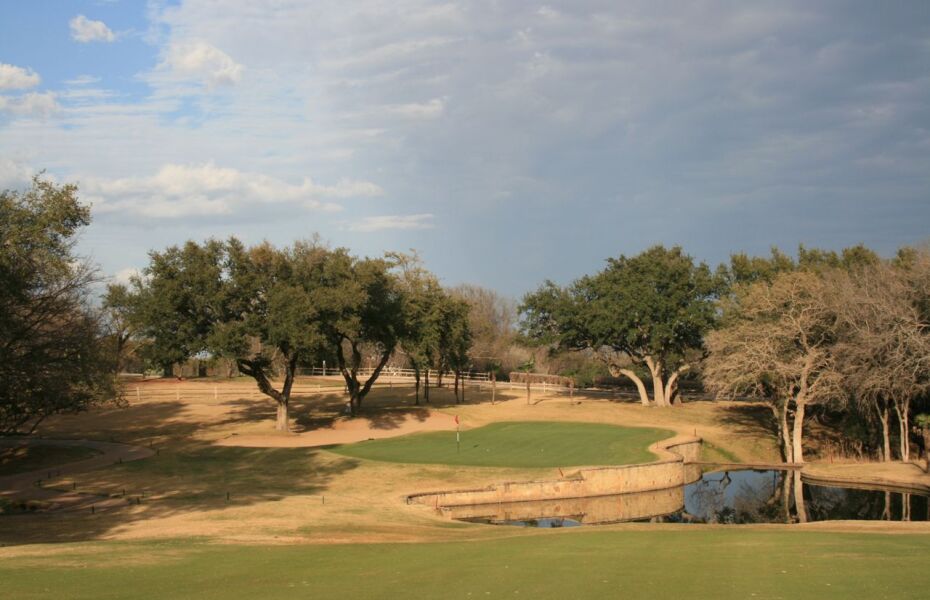 The par-4 16th hole at Ram Rock plays downhill to a small green guarded by water on the right side. Brandon Tucker/WorldGolf.com 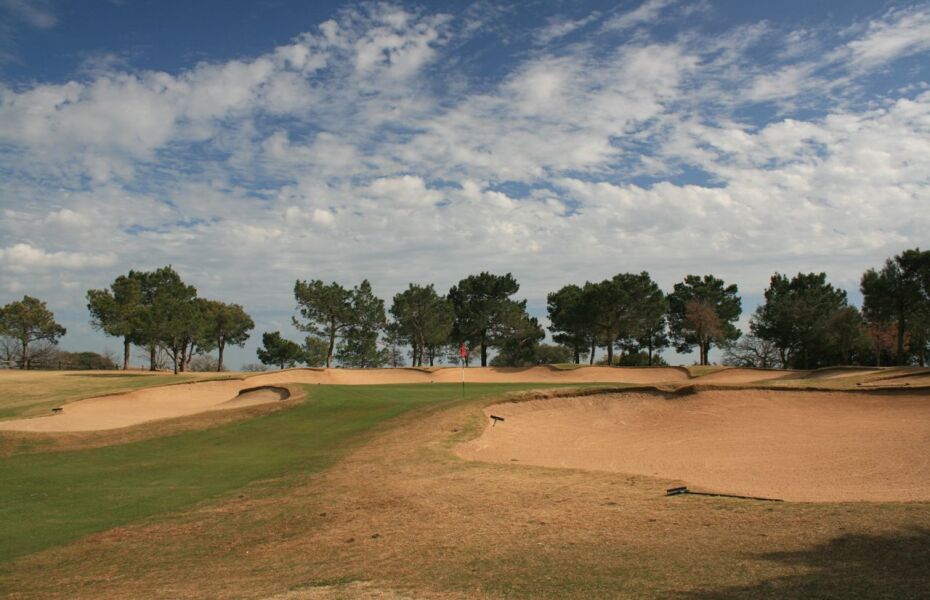