Gleneagle Golf Course in Arlington is just an hour north of Seattle. The 5,949-yard, par-70 layout may seem relatively short, but it's a course that will test your shot making skills and accuracy with strategically placed bunkers and undulating greens. The layout makes up for any lack of length in many other ways, including the treacherous rough that lines the rolling fairways. Water hazards come into play as well, but there are more on the front nine than the back. There are some challenging holes but overall, players of all skill levels will enjoy the golf course, especially with its backdrop of cedar and fir trees spread across rolling hills. With a driving range also available, Gleneagle offers one of the area's best values for the money.

The 19th Hole is Great For:
Drinks 15
Patio Dining 12
Watching the Game 10
Course Challenges Include:
Narrow Fairways 32
Bunkers 29
Water Hazards 25
This course/club is great for:
Locals 23
Seniors 17
Advanced Golfers 14
This Course's Location is:
Worth the Drive 19
In the 'Burbs 14
Convenient to the City 12

Ok so this is a pretty tight course but it is a lot of fun and forces you to get your Slice under control.
You can really see the hard work paying off for the ground crew! The traps have all been raked out and the fairways and rough cleaned up. The tee boxes still need some love but I think the crew will be getting those shaped up pretty quick! I have played this course often over the years and I think this is the best shape the course has been in my memory!

This course is tight
May be difficult for some

Tee boxes were in rough condition when I played

Cool course I’ll be back

A new era, a new owner, a long ways to go

I have always enjoyed Gleneagle. Not long, but requires you to strike it well or it bites you quickly. Traditionally the greens and conditions were some of the best in Snohomish county. I hadn’t been up here since 2019 and was kind of shocked to see the conditions. The very nice man who checked me in disclosed they were the new owners and they were working through getting it back - but until I got on the course I hadn’t realized how far it had fallen.

The greens are always the star of this track - and they had been punched two weeks ago so rolled a bit bumpy but but were fine. The bunkers and off fairways were a different story. Weeds and essentially neglect is the best way to describe probably 70% of the bunkers - I finally just dropped out of one when it had more tumble weeds and scruff then a homeless Oklahoman.

The fairways were ok, narrower and inconsistent in mower height, but generally fine - but off the fairway was cooked, burnt, dead grass. Lies we’re uneven, it was almost clay like at points. We have had a dry summer and fall - but there is still sprinklers, somewhere, right? Hard to look at a cooked parkland course - harder to play it and watch the ball bound into peoples yards.

The place Needs irrigation, needs more ground crew (a couple were driving up and fertilizing mid day) , need someone to just go out and trim blackberrys from around trees, pick up downed trees (they’ve done some clearing which was nice but the dead trucks and leftovers were displayed all over the place. I remember it being pretty clean and fun - short but good golf. The range was pretty bad - mats and balls really run down.

Yesterdays round leaned toward dog track - even though I know for $27 what should I expect, but it still stinks cause I know the new owners care and are trying. And I always enjoyed Gleneagle but I won’t be back for rest of this year. I will be rooting for them to find some more staff, and Maybe some natural rain and a winter without major flooding will help this place bounce back. The renovations to the clubhouse, restaurant and bar scream high end. I wish the course matched that. Once it does, this will once again become a go to public course where you can enjoy a round, then have drinks and great food - an every man’s country club feel like it once had.

I will say pace of play was outstanding as we finished in less than three hours. The carts were nice and new. The tee boxes weren’t bad. You have to squint to see it, but I believe Gleneagle is on the way back.

Hello, thank you for taking the time to review our course. We appreciate your dedication to playing our course over the years but are very sorry to hear your recent experience with us may have been poor due to the course conditions.

We greatly value your feedback as we work towards any necessary improvements and hope you will notice some of these improvements during your next round with us. Thank you for choosing our course, and we hope to see you again soon.

Normally nice course. But no care is taken of. Bunkers are not working. It is value for money and technically difficult course. If the course conditions have been better, it would be a wonderful challenge.
Carts in good condition
Bar and restaurant very good.

Thank you so much for leaving us with your feedback. We value our customer experience, so your review is important to us. We will make note and we hope to see you back at Gleneagle Golf Course!

The greens are amazing , there working on bunkers and mowing its coming along great.

The cart roads are very bumpy so sometimes I feel it is dangerous to drive. Needs to fix soon. Very concerned about it.

Thank you for reviewing the course. Let us first start by apologizing for the condition of the cart path. Your feedback is important to us, and we are going to escalate your feedback to our team so we can make improvements. We will continue to work towards an excellent experience by using your comment for guidance. Thank you for playing Gleneagle Golf Course. We hope to see you again soon.

The condition of bunkers are unmanaged now. We understand the situation. But the most of the cart roads are bumpy and dangerous. Need to repair asap.

Hi! Thank you so much for leaving us with your feedback. We value our customer experience, so your review is important to us. We will make note and we hope to see you back at Gleneagle Golf Course!

There are a lot of things that have improved greatly such as clearing of a lot of underbrush, great food in the restaurant (we had prime rib). The staff and Paul the golf pro are really great and friendly. The only thing I heard from other people and friends, is "what is up with the bunkers". Weeded, rocky and wet. It is a surprise given how much the course itself has improved. If they can get the bunkers fixed it would be awesome.

The course was very neglected. 2 holes on the front which included the first par 3 had water on the green. Unputtable. Most of the bunkers looked like ground under repair. The driving range was horrible. The mats were tore up and hooked your club if you werent careful. The balls that i got looked like they had been sitting in the woods for years.
The best part was i got a cart and it was a very nice cart. Comfortable seats and in great condition.
I wont be coming back unless i hear it has been taken care of. It really is a shame. It used to not be like that.

Thank you for visiting Gleneagle Golf Course. We hope you'll give us another try in the future.

Thank you so much for leaving us with your feedback. We value our customer experience, so your review is important to us. We will make note and we hope to see you back at Gleneagle Golf Course!

NICE COURSE, CLOSE TO HOME. NOT TOO HARD TO GET ON. AVOID THE BOOKING COMANY. TRY TO BOOK THRU THE PROSHOP. 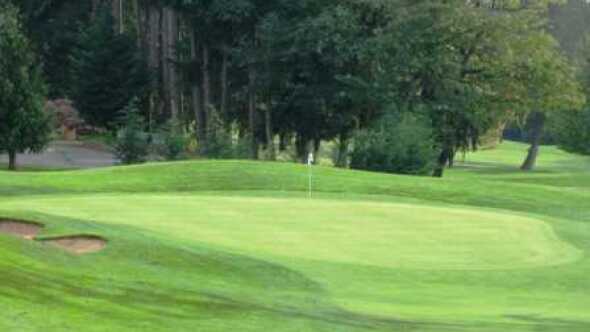 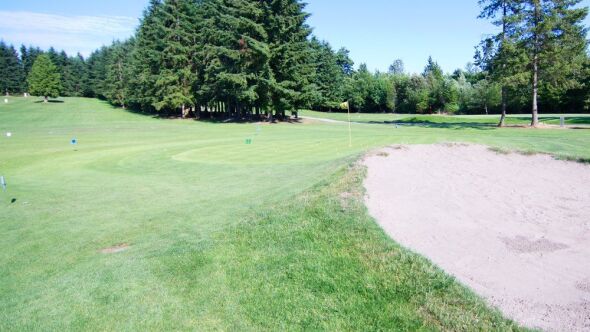 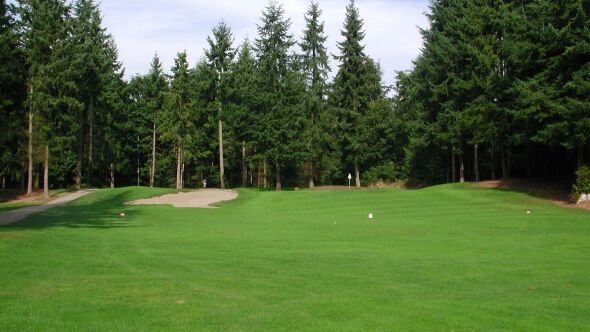 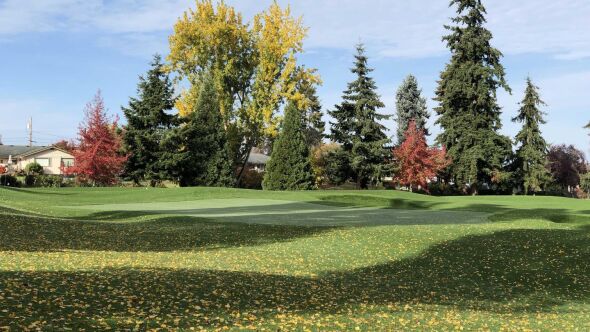 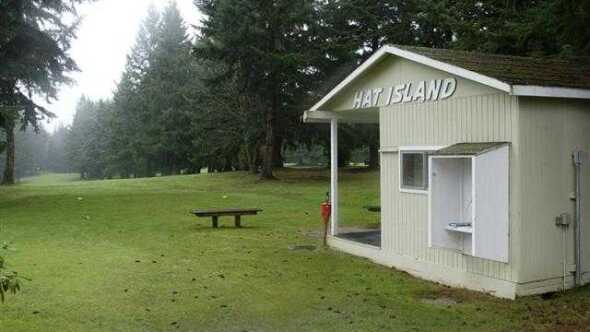 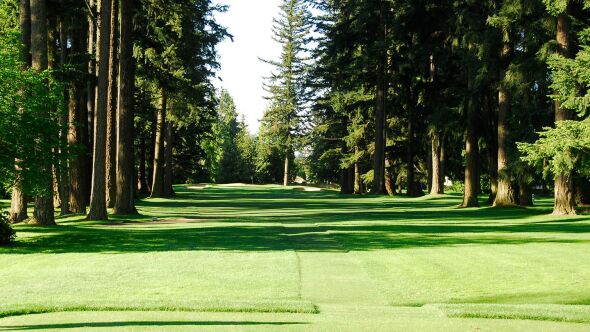 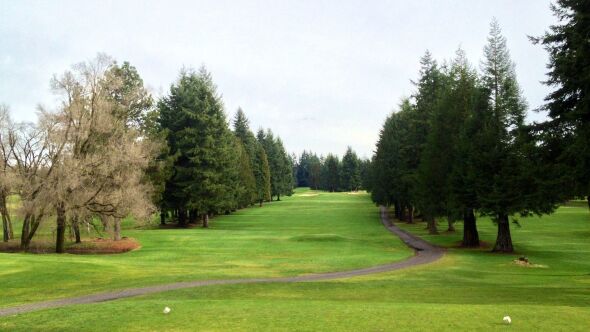 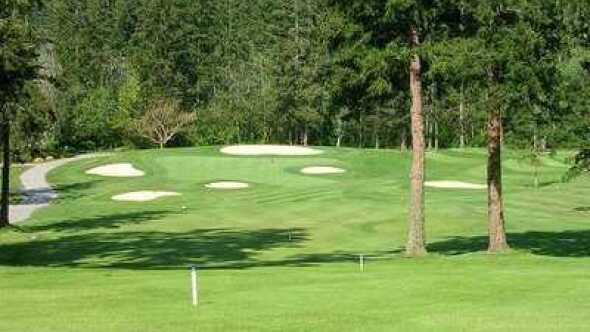 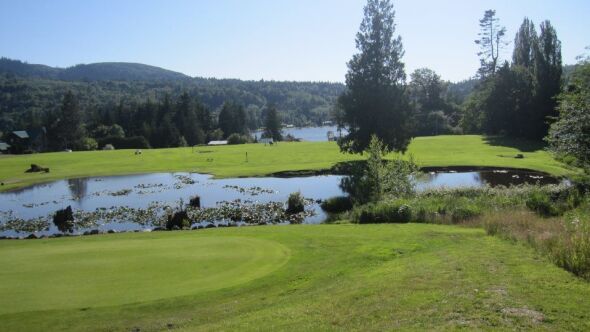 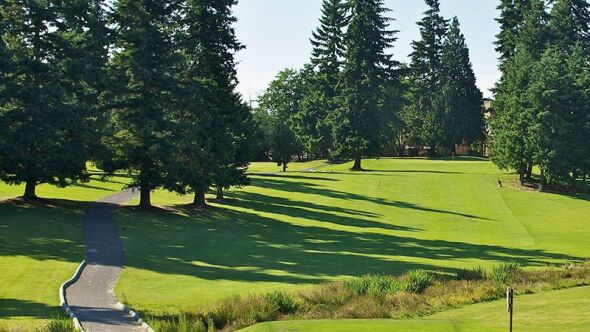 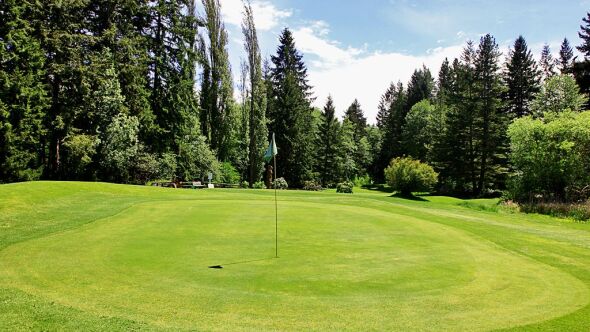 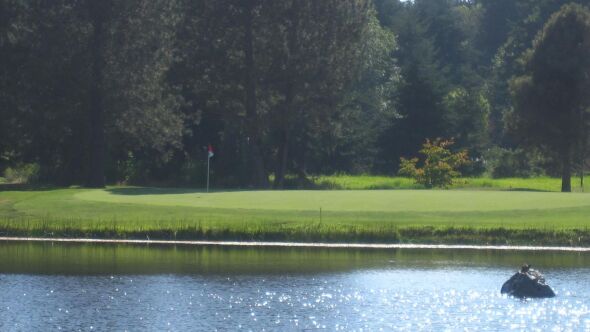 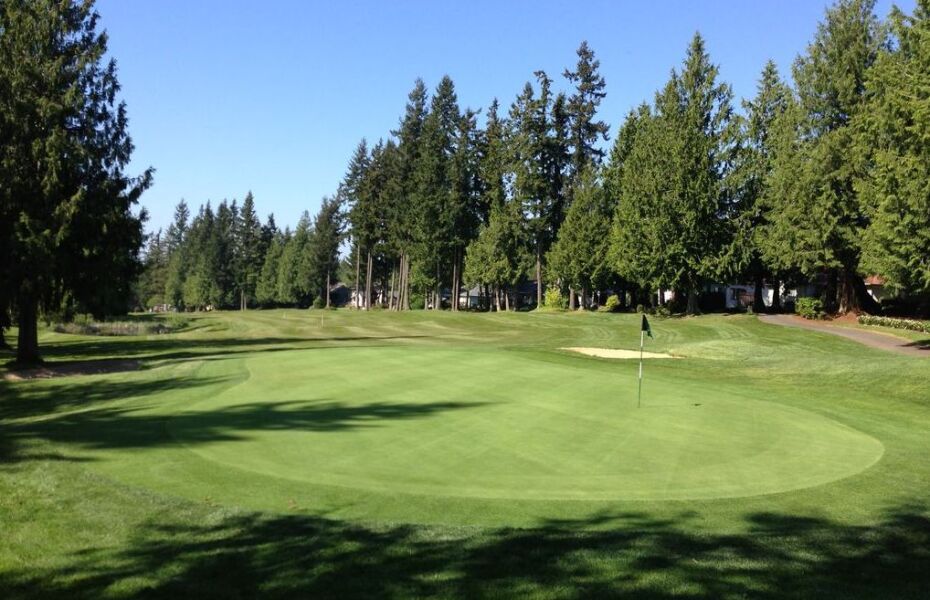 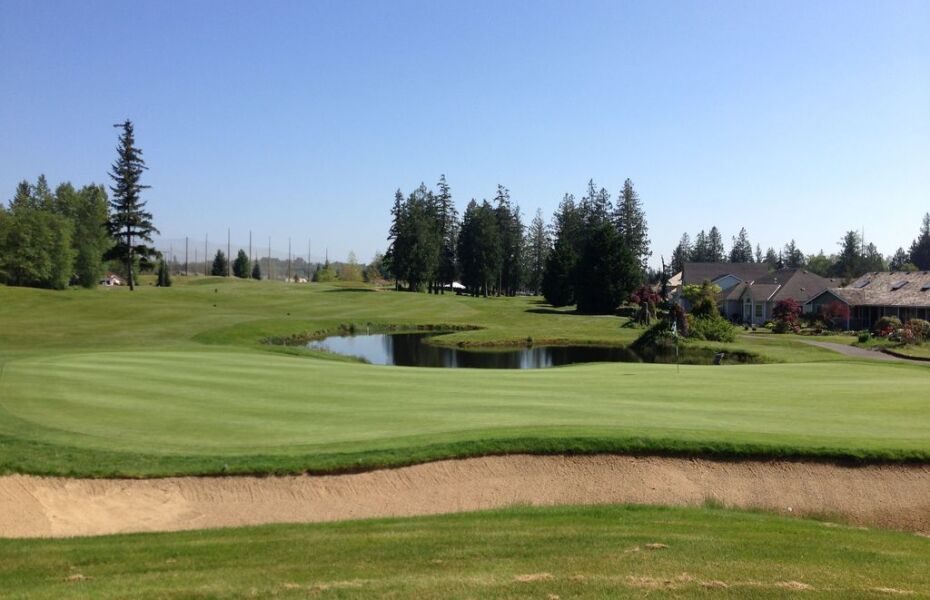 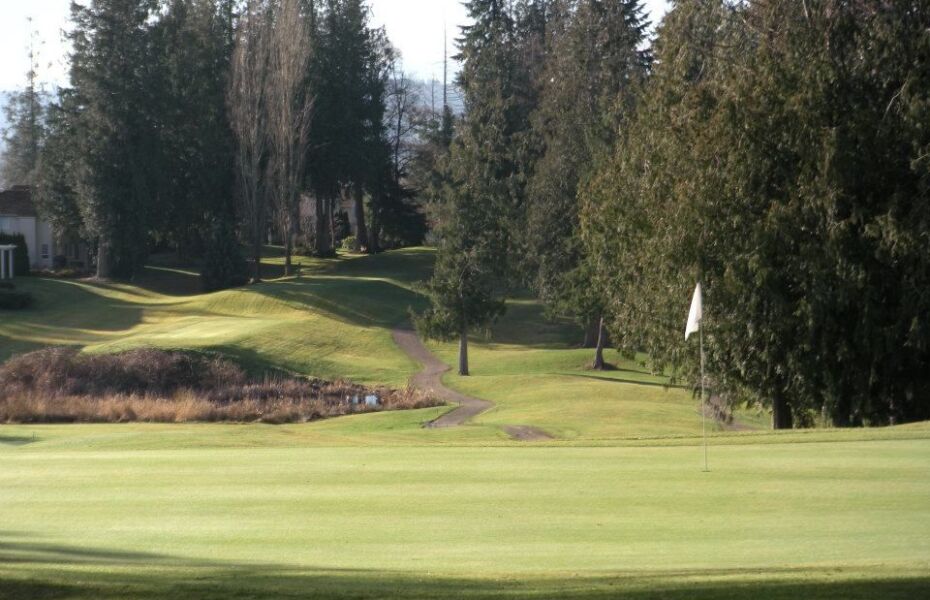 A sunny view of green at Gleneagle Golf Course 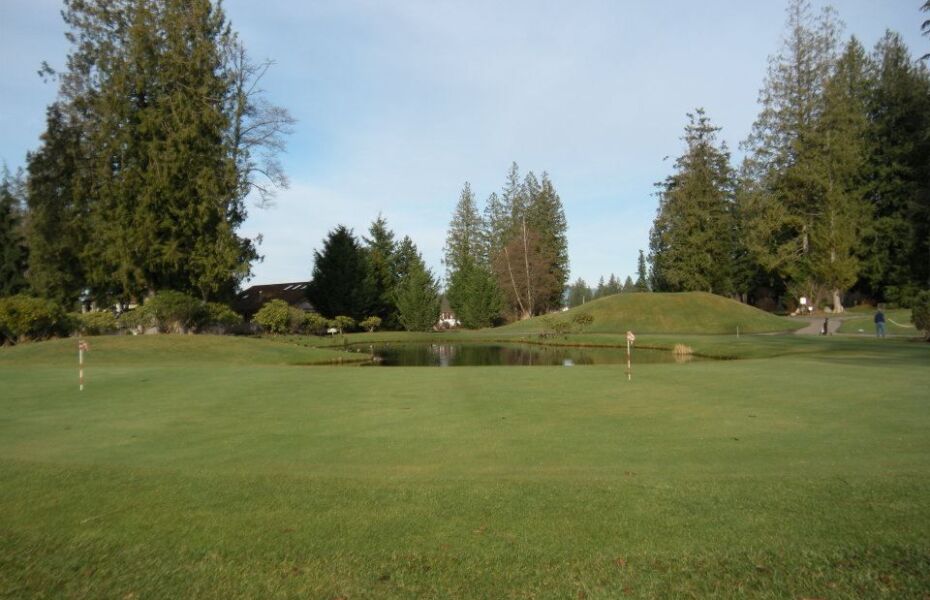 A view of the practice area at Gleneagle Golf Course 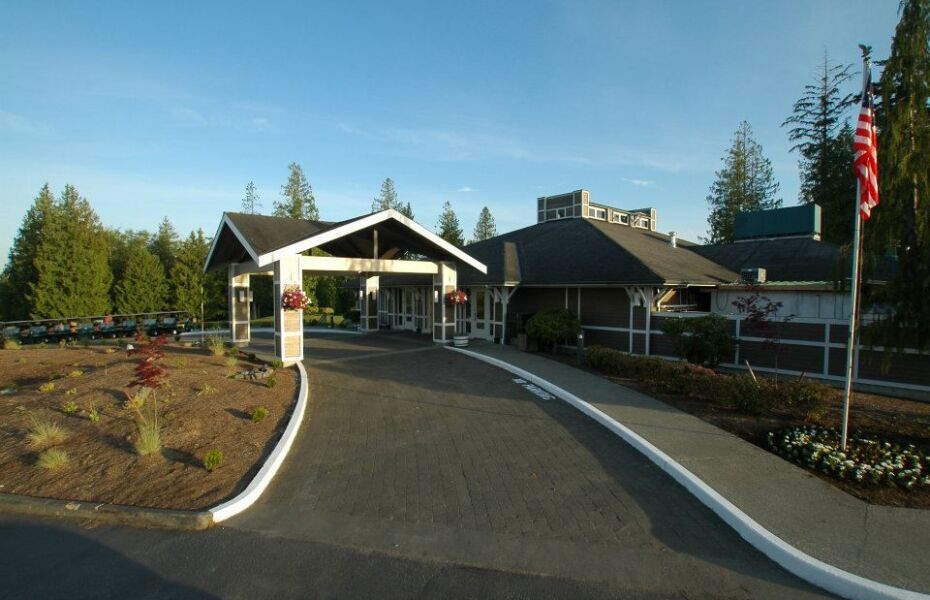 A view of the clubhouse entrance at Gleneagle Golf Course 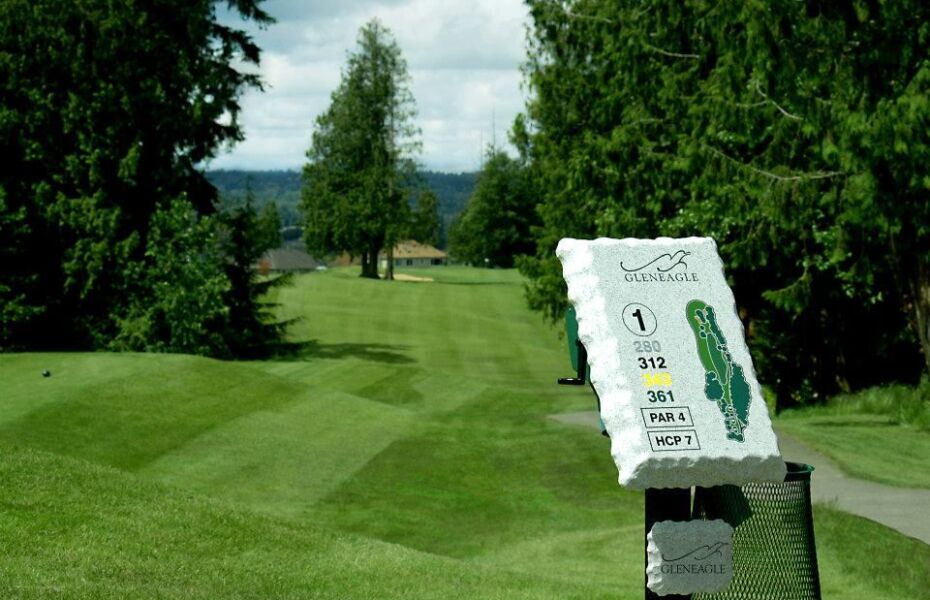