A phenomenal host course and fun format add up to the most entertaining viewing experience of the year.

It was great to see Rory McIlroy break his 18-month win drought, grinding out a one-shot victory at the Wells Fargo Championship at Quail Hollow Club in Charlotte.

But for my money, and with all due respect to the now-19-time PGA Tour winner (including four majors), the most interesting golf event of the weekend was happening 575 miles due south, just around the corner from McIlroy’s Jupiter, Fla. home.

The 2021 Walker Cup, pitting teams of top amateur golfers from the United States against their counterparts from Great Britain & Ireland, over-delivered on the audience's high expectations of exciting, competitive golf viewing.

In fact, it was the best televised golf-watching experience of the year so far, and it will be difficult to top for a while. It mixed a spectacular venue with a compelling format so deftly that, at least for the weekend, the PGA Tour simply could not compete for sheer watchability.

We've had some fun tournament finishes so far in 2021. Hideki Matsuyama's Masters victory was emotional, but far from some of the white-knuckle drama we've seen at Augusta National in the past. Justin Thomas' Players Championship win was satisfying, but not nearly as thrilling as past editions at TPC Sawgrass.

The real competition may have come from the 2021 Augusta National Women's Amateur, where Tsubasa Kajitani rose above a crowded leaderboard to win in a playoff over Emilia Migliaccio. As in 2019, Augusta National proved it's a wonderful playing field for elite female and male golfers alike.

In similar fashion, the Walker Cup affirmed that an architecturally interesting course, presented at the height of its maintenance meld, is an essential part of a great viewing experience. Long averse to the spotlight, Seminole Golf Club, a Donald Ross masterpiece on Atlantic Ocean-front acreage in Florida, put on a wonderful show for both the players and the gallery, both on site and on their couches. Peeling back the curtain on a top-ranked though little-seen venue was a true treat for avid golfers.

Seminole’s firm, convex greens, deep bunkers and persistent breezes made every shot both a physical and a mental challenge for the players. The long dogleg-left par-4 18th, running along the ocean, set the scene for several dramatic match conclusions. Its elevated green shrugged multiple approaches off to the right, down a steep hill, and balls rolled 50 yards away onto the practice tee, setting up some unusual and thrilling 11th-hour recovery shots. Back by the fairway, four GB&I players would miss left off the tee into scrubby sand.

GB&I star Joe Long came to the tee 1-up against American John Pak and hooked his tee shot into a bush. Pak, after a perfect drive, hooked his approach into trouble left of the green, handing the advantage straight back to his opponent at a crucial time in the match. It was an excruciating exchange, with Long winning the hole with a double-bogey, but it was also tremendously dramatic. Similar scenes and quick-fire match reversals to this one played out throughout the weekend, including a near-hole-out bunker shot from GB&I's Barclay Brown that would have changed the complexion of the entire match.

For its part, Quail Hollow is a fine golf course, and one of the most prestigious in the golf-rich state of North Carolina. It’s a parkland layout that touring pros praise for its straightforward nature and immaculate conditioning. Pearlescent bunkers nuzzle the large, undulating greens, as do glassy ponds and rocky streams, at times. The closing stretch, “The Green Mile,” is one of the toughest on tour.

But in the end, these features just don’t quite hold up against the death-or-glory setup of Seminole. In the battle of host venues, Seminole wins handily.

Then there’s the contrast in formats. The Walker Cup is a team match-play duel, similar to the Ryder Cup but with fewer players per team (10 vs. 12). Unlike the Ryder and Presidents Cups, it eschews four-ball sessions, which tend to bog down play with matches taking five-plus hours. The Walker Cup's style is four brisk, pressure-packed alternate-shot Foursomes matches each morning, followed by afternoon Singles sessions (8 on Saturday and 10 on Sunday).

The Wells Fargo, like almost every other PGA Tour event, is 72 holes of stroke play over four days. It’s a fine format, but something of a slow-burn that pays off only at the end of Sunday, with a single winner walking away with the trophy.

In two days, the Walker Cup produced 27 discrete results (26 distinct matches whose tally had the United States taking the overall total, 14-12). In four days, the Wells Fargo proffered just one. It included some drama, too: an intriguingly nervy final 20 minutes for McIlroy as he overcame a tee shot into a penalty area and ultimately sealed his one-shot victory with a closing bogey.

Handfuls of fun individual battles vs. one four-day process to determine a winner? Seminole wins, 2 up, even though its cast of golfers did not hold a candle – in aggregate skill, experience or name-recognition – to the PGA Tour’s event.

The delight of watching the Walker Cup reminds us of an essential truth: that the game of golf itself is inherently interesting and compelling, independent of even the most charismatic and celebrity-like collection of its superstar pros at any given time. A prestigious amateur event managed to outshine the PGA Tour for a weekend, thanks to a potent combination of host course and format.

Stroke play is a tried-and-true method of determining the best golfers week in and week out. It’s not going anywhere anytime soon, and that’s okay. But with its vast resources and influence, the PGA Tour and its backers would do well to remember that while superstar players may come and go, great venues are always worth seeing. 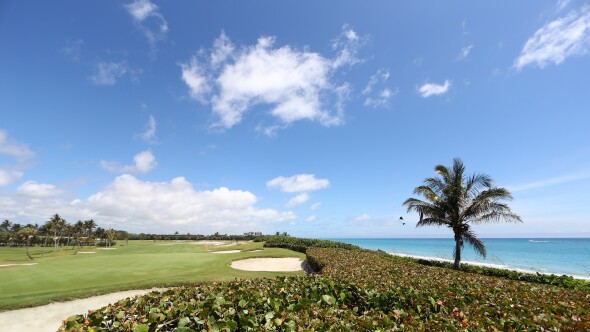