Great golf courses can be crucial to the drama of an event.

In television shows and films, setting can play as important a role as any single character. In movies like Woody Allen’s Annie Hall and Manhattan, New York City itself is part of the cast. Los Angeles is essential to favorite movies of mine like Magnolia and The Big Lebowski. Backwater Louisiana scenery helped make the first season of True Detective one of the best shows of recent years.

Golf tournaments are theatrical, too. And while we’re happy just to to see the game's superstars ply their trade, a great golf course makes the dramatic action much more interesting. The old adage that pro golfers would play in a parking lot if the money was right is true, but where’s the fun in that? The Masters is a singular viewing experience not because of the revolving cast of players, but the stage they share: a golf course whose standout holes millions of golfers could describe in exquisite detail despite only having seen them on TV.

Sunday’s TaylorMade Driving Relief, a skins game where the team of Rory McIlroy and Dustin Johnson bested the duo of Rickie Fowler and Matthew Wolff, would not have been nearly as compelling if it hadn’t been held at a course as fascinating as Seminole Golf Club in Juno Beach, Fla. The Donald Ross design is one of America’s greatest courses thanks to a 90-year history underpinned by a special setting, ingenious routing and a membership committed to preserving their treasure.

Adding to the appeal of the event was Seminole's track record of quiet exclusivity. It hosts annual gatherings of strong players like its vaunted Pro-Member and the mid-amateur Coleman Invitational, but it had never been on television before this entr’acte to what figures to be a cautious resumption of the professional golf schedule when the Charles Schwab Invitational at Colonial Country Club in Ft. Worth, Texas begins June 11. Scheduled to host the high-profile (and FOX-televised) Walker Cup in 2021, the club seemed to treat this one-group showcase as a warmup to what should be a celebration of the best of amateur golf next May.

Even though the coronavirus pandemic precluded the type of soaring visuals that normally accompany golf broadcasts, attentive viewers got a four-hour look at something that separates superior tests of golf from mediocre ones. In the face of even rusty pros, most golf courses are passive; they let the best players roll over them. But Seminole and its ilk seem to stir when threatened, swatting away pedestrian shots. 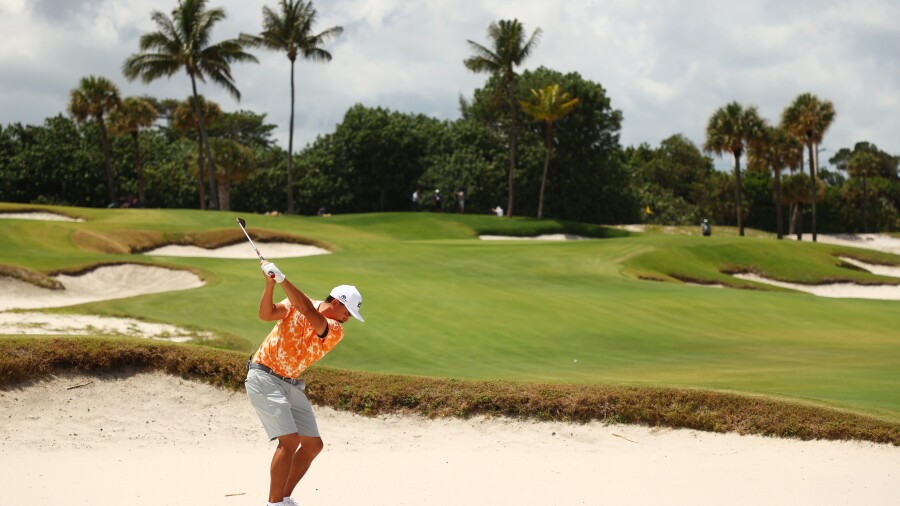 Rickie Fowler found himself in some of Seminole's 161 bunkers early, including here on the par-4 2nd hole. Mike Ehrmann/Getty Images 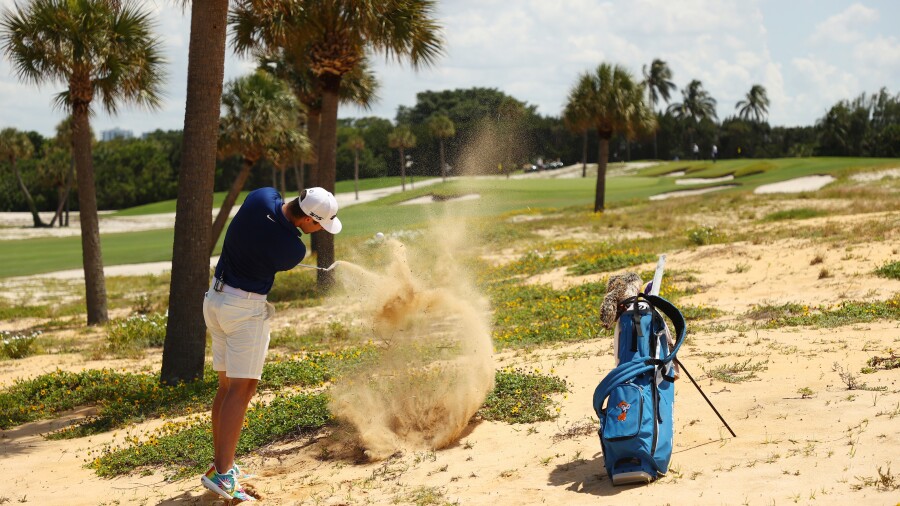 Matthew Wolff flashed prodigious driving power throughout the round, but he found some sandy rough on the par-5 3rd hole. Mike Ehrmann/Getty Images 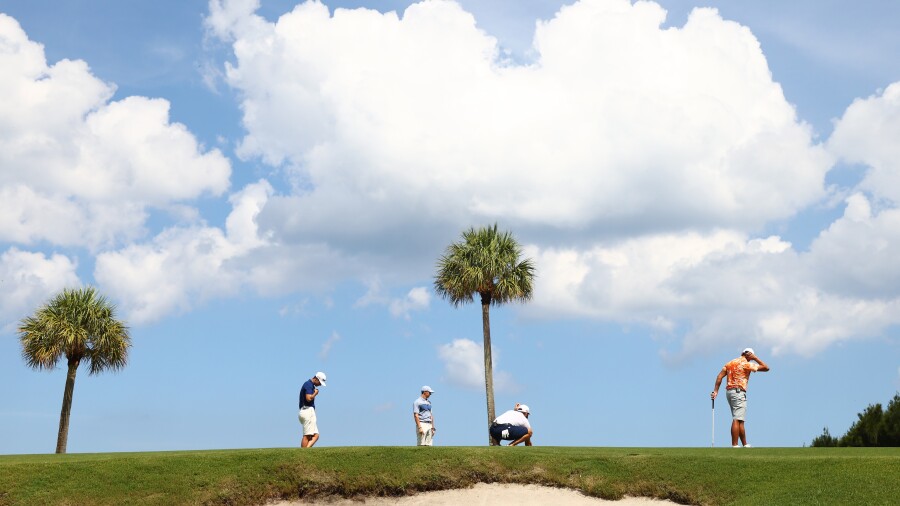 Seminole Golf Club's elevated, crowned greens confounded the players throughout the day, especially since they did not have the benefit of caddies. Mike Ehrmann/Getty Images 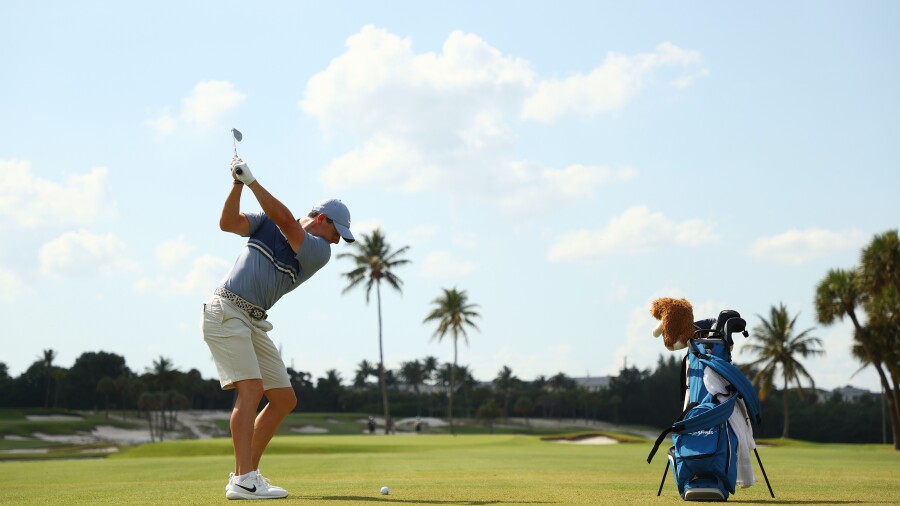 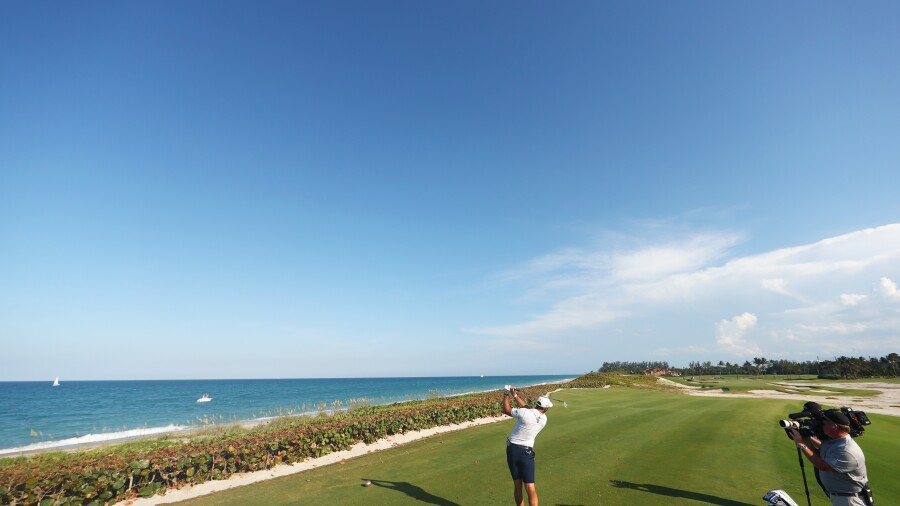 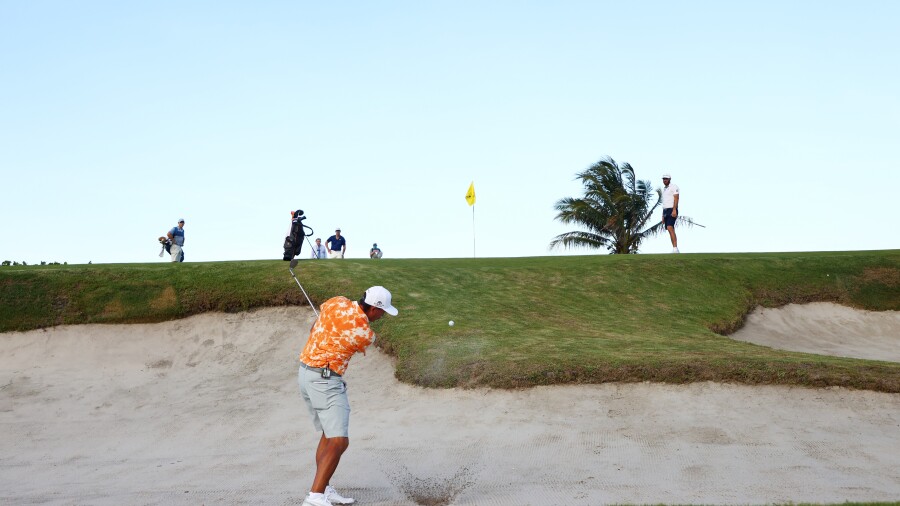 It happened on the very first hole Sunday, when after a long but errant drive, Matthew Wolff’s wedge approach came into the domed green with just a skosh too much heat and drifted down and away from the pin, into the fringe. Elsewhere, Wolff might have had a 15-footer rather than the 6-footer he wanted. At Seminole, however, his aggression left him with a tricky pitch.

This scene repeated itself throughout the afternoon. Even though more than three inches of rain had fallen on the course in the preceding 48 hours, Seminole's elevated, domed greens punished mediocrity. Its sandy soil and routing that wanders up, across and down two parallel sand ridges bracketing its oceanside perch were enough to give three accomplished thirty-somethings and a 21-year old wunderkind plenty of trouble. Wolff wowed us with two tee shots totaling 724 yards - 356 on the second and 368 on the 14th - that earned him long-drive honors at both opportunities. But he only registered three birdies on the round.

The foursome's shortest hitter in the foursome, Fowler played the best golf, making seven birdies. He also authored the day’s most impressive approach, carving a genius iron into the fearsome fourth green for a birdie.

Like many of the greats, Seminole got better as the clubhouse hove into sight. On 16, all golfers but Fowler wailed away at the green from the tee, but all but Johnson ended up making birdie. Fowler's plodding long-iron-wedge approach paid off, while Johnson's tee shot ended up about 60 yards left of the green and he couldn't cozy the resulting awkward pitch from a bad angle close enough.

The par-3 17th, its green ringed by bunkers and benched into the ocean-adjacent ridge, was so nice, they played it twice. In regulation, with $600,000 on the line and a fresh breeze off the ocean, both McIlroy and Wolff posed after their tee shots as if they’d flagged them. Both players caught the bunker just short and left of the far rear-left hole location. When an elite golfer poses, he or she is almost never wrong. But Seminole’s combination of natural exposure to the elements and subtly diabolical design played tricks on two great players, exacting a mental toll in addition to the physical.

McIlroy stole the show in the end, winning the sudden-death, 121-yard closest-to-the-pin contest on 17 that settled the final $1.1 million skin by besting a solid effort from Wolff. Despite his admission that wedge play is a relative weakness in his game, McIlroy stepped up and hit a world-class short shot under the pressure of playing not for himself, but the American Nurses’ Foundation, his and Johnson’s designated charity.

A great golfer and a great course bringing out the best in each other: how fitting.

At a loss for what Murray was trying to say or do, awkward at best! We live in FL and over the past few years heard the course was not in good shape, however, looked great on TV!

If that's one of the top four courses in the USA then the game's in a bad way. A shotmaker's paradise? Do me a favour. Wide-open fairways, very little rough (if any), no run on the ball, flat as pancake bunkers, it's only defence was its raised greens. Everyone raves about Donald Ross's raised greens and subtle run-off areas. He only built them like that for drainage purposes, and in Florida where your feet are never more than 12 inches above water that's pretty important. Also, there's no way they could squeeze a proper crowd into Seminole so we can forget any tournaments being held there any time soon.

Too bad the announcing was so bad DiRico seemed to be on another planet with the mistakes he made . Clearly the second team all around as they even forgot to white circle the holes so TV viewers could see the hole that the players were playing to , Hope this isn't the new normal

Great 18 holes...Finish was poorly executed. Fowler played great and to lose to a 120 yard shot was not a deserving way to finish!
Dividing the final money would have been a better result!

Agreed...don’t think there was any added benefit from having the President and Bill Murray involved in the telecast. I was hoping that some more professional players would pledge some money for the worthy causes...kudos to United Health ,Carl’s and those who did step up..