Pacifico Course at Punta Mita: A golf paradise in paradise

3B or not to 3B on the Pacifico course at Punta Mita Golf Club in Mexico? There is no question 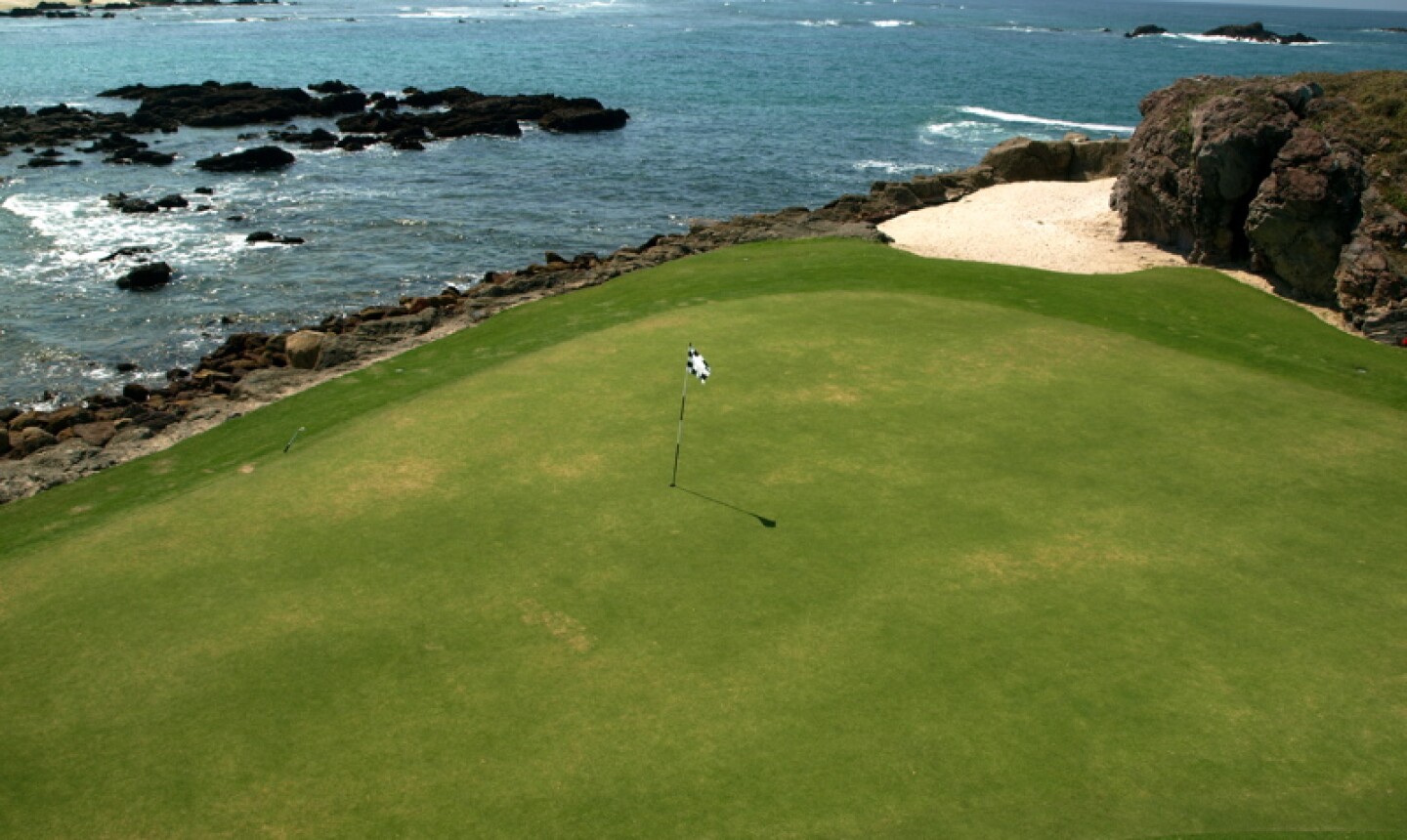 Hole 3B on the Pacifico course at Punta Mita Golf Club in Nayarit, Mexico, is billed as the world's only natural island green. Mike Bailey/Golf Advisor 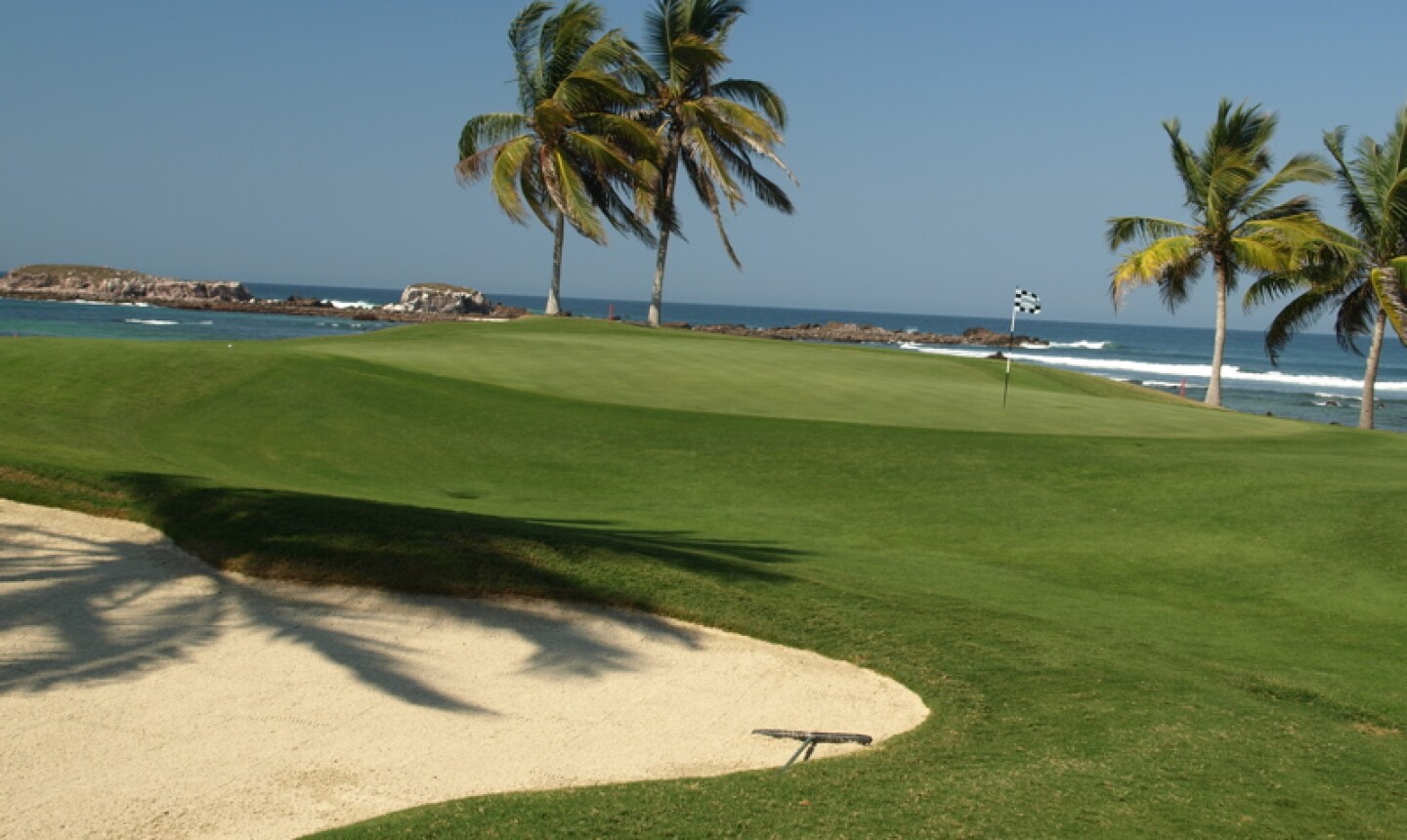 The 18th on the Pacifico course at Punta Mita Golf Club in Nayarit is one of eight holes located on the ocean. Mike Bailey/Golf Advisor 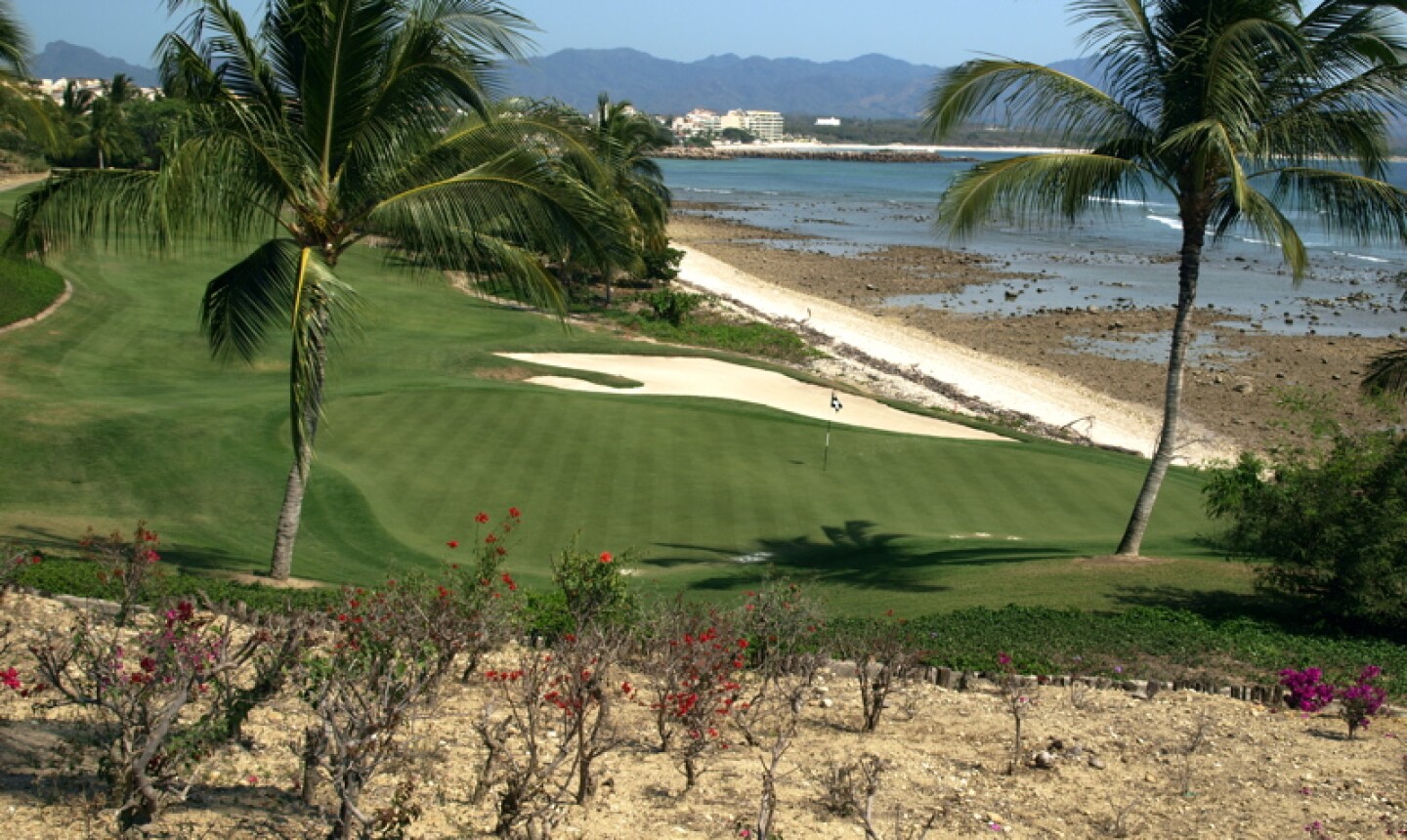 The long par-3 eighth on the Pacifico course at Punta Mita Golf Club requires a solid long iron or hybrid off the tee. Mike Bailey/Golf Advisor 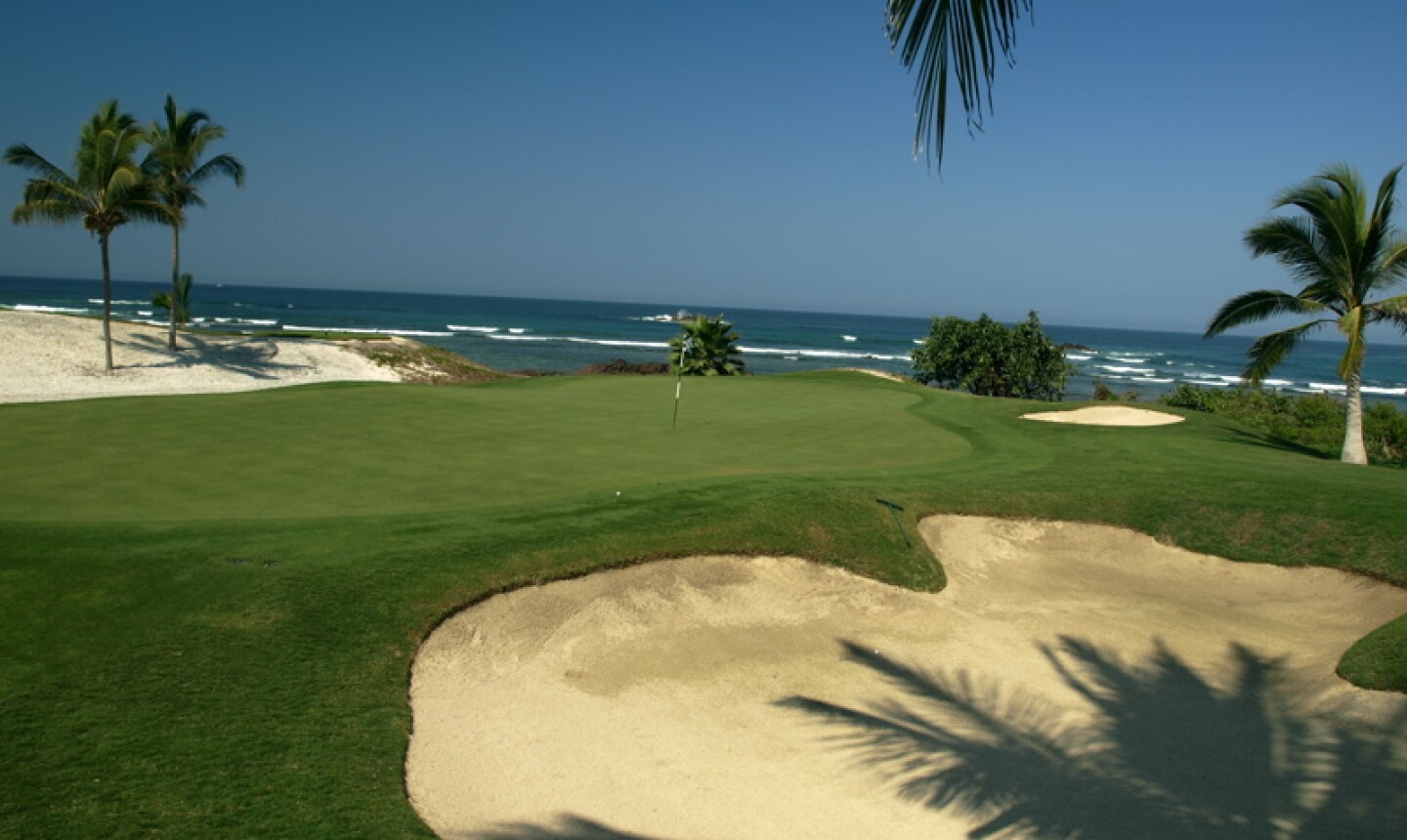 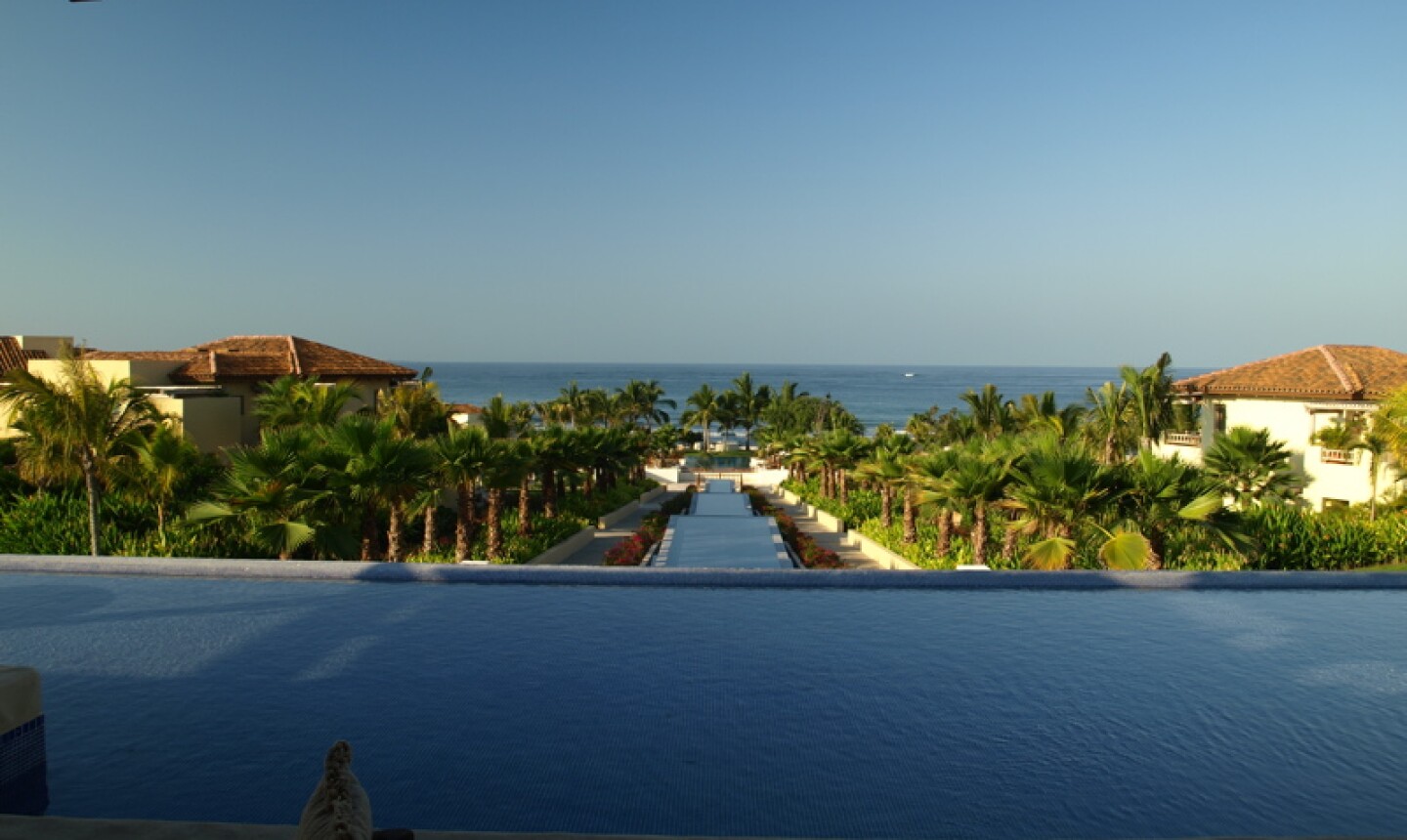 This is the view when you check in at the St. Regis next to Punta Mita Golf Club. Mike Bailey/Golf Advisor

PUNTA MITA, Nayarit, Mexico - The first time you play the Pacifico Course at Punta Mita Golf Club, you'll approach it with your eyes wide open. Because at every corner, over every ridge - it seems - there's something to make you say "wow."

And it doesn't take long.

By the time you get to the third hole of this Jack Nicklaus gem located about 45 minutes north of Puerto Vallarta, your senses are already in overdrive. And that's just when you reach the first third hole.

There are actually 19 holes on this par-72, 7,014-yard golf course and two par-3 thirds. On most days, when play is light, you can certainly play both of them - maybe even take your pick of which score you're going to count.

The golf course, which opened in 1999, would still be spectacular if hole 3A wasn't followed by 3B. At 181 yards with marsh between the tee and the green and ocean in the background, 3A holds its own among the par 3s throughout the course.

But if you're playing here for the first time, it's the second third hole you'll not to want to miss. At 199 yards from the back tee, the shot is over the Pacific Ocean to a black lava rock island that is only accessible by cart during low tide. During high tide, the course has an amphibious vehicle to transport you to the green.

On the tee marker, you'll find these words:

"You are about to play the world's only natural island green. Course Designer Jack Nicklaus describes 3B as 'probably the best par 3 I've ever designed.' We hope 3B will be a hole you never forget."

Not only will you not forget 3B, but also you're unlikely to forget most of the holes on this golf course - and that's if you only play it once.

Nicklaus has reportedly compared this course to Pebble Beach Golf Links, but there really is no need. The golf course, with half its holes perched above the Pacific Ocean on Banderas Bay, holds its own to most any course in the world.

It may not be one of the toughest tracks you'll every play, but it's guaranteed to be one of the most enjoyable. The fairways are generous, approach shots are challenging and the scenery is hard to beat.

As far as great holes go, take your pick, and not all of them are on the ocean. With the Sierra Madre Mountains as their backdrop and white sand bunkers outlining the greens and fairways, you won't get bored when you're missing the views of the Pacific.

Still, it's those ocean holes you travel halfway down the Mexican coast to see, and they are all pretty great.

The eighth, a 216-yard par 3, usually plays along some sort of wind, which makes it difficult to not only find the right club but control your ball flight to this well-protected green. From the green is one of the best views of the golf course with the white sand beaches and Pacific Ocean - usually full of sailboats and fishing boats - below.

The finishing stretch on this course is stellar. The 16th is a 473-yard par 4 that, depending on the day, may be difficult to reach even by good players.

At 205 yards, the par-3 17th is set against the backdrop of the surf, with bunkers protecting the green on three sides.

And the 18th, which usually plays into the sea breeze, hugs the coast on the right side to the tune of 445 yards.

If you're lucky enough to get on Punta Mita Golf Club, either by knowing a member or staying at the two resorts that service the golf courses here, you won't leave disappointed.

Speaking with an out-of-town family having lunch after having played the course, its members agreed that not only was the scenery spectacular, but the course was eminently playable as well.

While it would be difficult to get low on this course, if you hit the ball reasonably, you shouldn't blow up. Your best bet is to try to avoid the bunkers because many of them are deep and truly penal.

Green fees, as you might expect, are steep here, but they are not unwarranted. The Pacifico Course at Punta Mita is as memorable a golf experience as you can have.

In line with the course, the practice facilities here are top-notch. You'll find perfect lies on this double-sided large range with plenty of targets. All the while, attendants clean your clubs and generally make you feel welcome.

There is also a large putting green, chipping greens and practice bunkers just before the first tee.

Individual lessons are also available from the professional staff. My recommendation is that if you are struggling with your game, don't hesitate to get help from Director of Golf Phillip Ferrari, an excellent instructor.

In November of 2008, the St. Regis opened next to the club. The resort features 120 secluded rooms, each with their own stairway and views of the Pacific Ocean. There's also the signature Remède Spa with nine treatment rooms, three outstanding restaurants, three infinity pools reflecting the sunsets, tennis courts, private cabanas and a beach club.

Four Seasons Resort Punta Mita offers 173 guest rooms, including 30 suites, in tile-roofed, Mexican-style casitas set along the Pacific Coast. Most of the rooms feature views of the ocean and mountains.

Recent additions to the resort include a lazy river, which makes the Four Seasons not only a great romantic getaway but a good family destination as well.

In addition, the Four Seasons also has a world-class spa, terrific dining and plenty of activities for guests, including the new Bahia golf course at Punta Mita , which is also designed by Jack Nicklaus. (St. Regis guests can also play Bahia.)

Tim Gavrich
Senior Writer
Now Reading
3B or not to 3B on the Pacifico course at Punta Mita Golf Club in Mexico? There is no question
Search Near Me