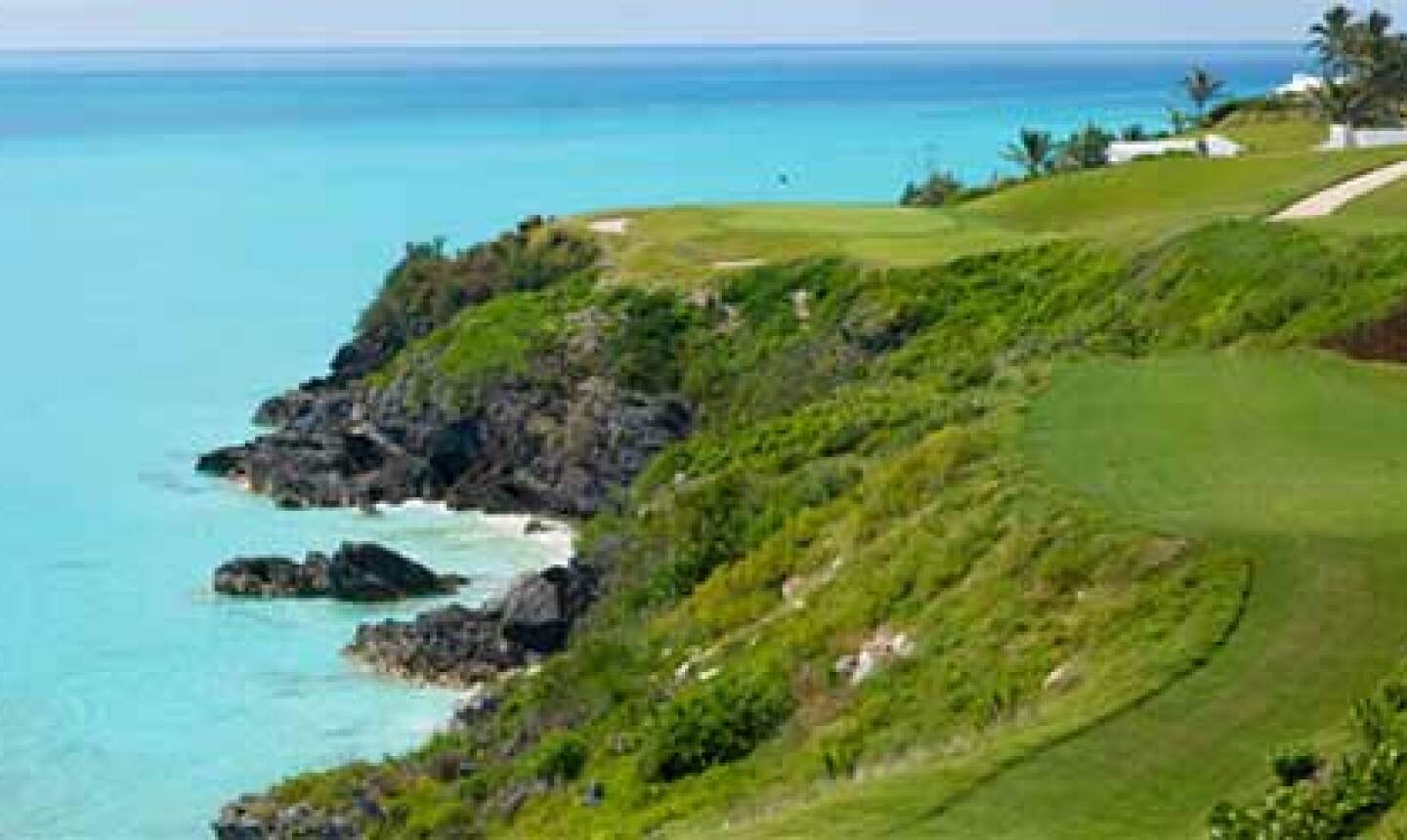 Port Royal Golf Course's 16th hole is one of the most memorable you'll play on Bermuda golf vacations.

I could be wrong, but my sense is that Bermuda often gets passed over in favor of Caribbean golf vacations, and this may be a mistake.

Here's why, and four big things Bermuda has going for it as a golf destination.

Abundant golf: For an island of only 20 square miles, Bermuda has a lot of golf courses, nine to be exact. In fact, the country claims to have more golf courses per square mile than anywhere in the world. Now, not all of them are worth your attention, but several are, including the Mid Ocean Club, a private, immaculately groomed Charles Blair Macdonald masterpiece that permits limited, non-member play. Most, if not all of the private courses here offer access through certain hotels, but I'll reserve any more recommendations until I read the detailed report on Bermuda Golf Odyssey is about to publish.

Proximity: Many people don't realize that Bermuda is not part of the Caribbean. It's actually located in the Atlantic Ocean and its nearest landmass is Cape Hatteras, North Carolina, about 600 miles away. As a result, you can fly to Bermuda from many eastern US cities in about two hours (and in three hours from Toronto, Canada; an in seven from London, England).

Mild weather: "Thanks to the Gulf Stream, [Bermuda] is insulated from the winter storms that blast the American continent. When snow and ice imperil the East Coast in January and February, Bermuda's daily high temperatures hold fast in the high sixties." That's what Golf Odyssey said in a brief article about the re-opening of Port Royal Golf Course (where the Grand Slam of Golf was played). Indeed, Spring-like temperatures are common in Bermuda from about mid-December through late March, with the average high temperatures ranging from 60-70 degrees.

Opposite Off-Season: When things start to get pricey and crowded in the Caribbean, they ease up in Bermuda. In fact, some people think November/December through March is the best time for Bermuda golf vacations. The weather can be cool (again, 60-70 degrees), but Hurricane risk goes down, hotels drop their rates by 20%-60%, and tee times become much easier to obtain.

There you have it; four reasons why you might want to consider Bermuda golf vacations.

Do you have more to add or personal experiences / recommendations you'd like to share? Please include your comments below.

I have been fortunate enough to play this course (as well as a few others in Bermuda) and it's a beautiful place. It can be on the expensive side but if you're on the East Coast of the United States, it's a short flight and you'll be rewarded with some real gems!

Totally agree on Bermuda. Mid Ocean is easily one of my all time favorite course and you are correct that most hotels can get you on there.

Kira K. Dixon
Lifestyle Correspondent
Now Reading
4 Big Reasons to Consider Bermuda Golf Vacations
New Cookie Policy
WE AND OUR PARTNERS USE COOKIES ON THIS SITE TO IMPROVE OUR SERVICE, PERFORM ANALYTICS, PERSONALIZE ADVERTISING, MEASURE ADVERTISING PERFORMANCE, AND REMEMBER WEBSITE PREFERENCES. BY USING THE SITE, YOU CONSENT TO THESE COOKIES. FOR MORE INFORMATION ON COOKIES INCLUDING HOW TO MANAGE YOUR CONSENT VISIT OUR COOKIE POLICY.
CONTINUE
Search Near Me