4 Courses We’d Like To See Host The Open Championship 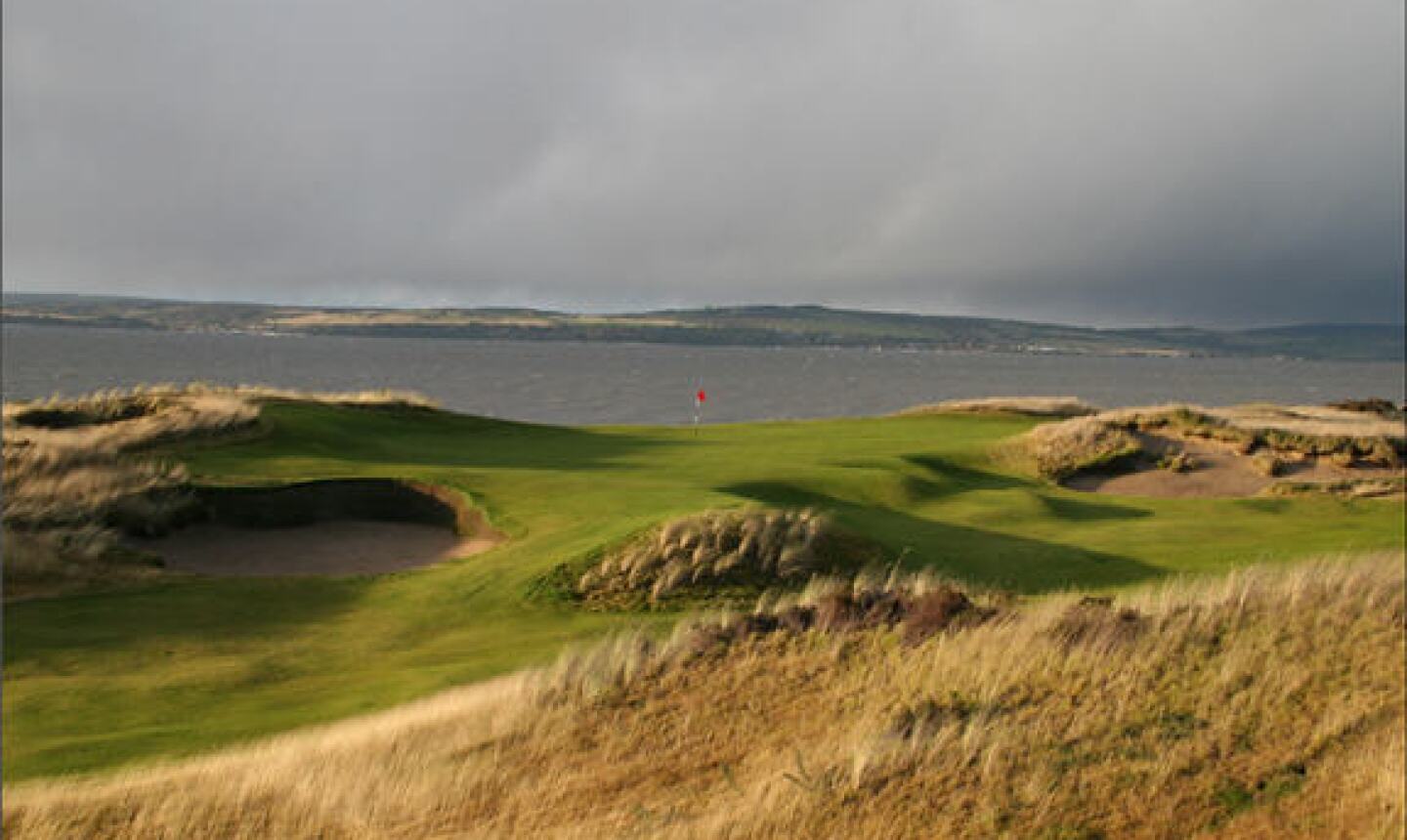 Castle Stuart Golf Links is Gil Hanse's second course in Scotland, but it is by far his most heralded, and for good reason. Golf Odyssey

I loved watching the Open Championship from Royal Liverpool this weekend. Rory McIlroy's performance was tremendous. I’m already counting down until next year, when the Open returns to The Old Course at St. Andrews.

I do have one minor concern, though.

As it stands, there are currently ten sites in the Open rota (counting Royal Portrush in Northern Ireland, host its first Open in 68 years in 2019).

The Old Course seems destined to host the event on every year ending in a 0 or a 5 going forward, which is fine. The game’s oldest championship should return to its most iconic championship venue that often. But as for the rest of the rota?

These venues are not total pie-in-the-sky choices, either. They are all long enough, tough enough and they have enough room to accommodate the thousands of fans and other structures that make up the Open Championship scene each year.

As always, please add your own nominations in the comments...

He can be a polarizing figure, but Donald Trump succeeded in his mission to build a world-class seaside course in Aberdeenshire, Scotland. Architect Martin Hawtree routed holes through some of the most striking dunesland in the Isles and the early returns from the course have been almost uniformly positive. It’s no secret The Donald would love to host an Open Championship in Aberdeen...and this course could actually do it. He's already purchased his way into the rota with Turnberry, and we think Trump International is also good enough to earn the nod from the R&A.

Up-and-coming architect Gil Hanse, who won the right to design Rio’s Olympics golf course, burst on the scene with Castle Stuart, his links gem near Inverness, Scotland. Hanse mixed larger, more rugged sandy hazards with the more traditional pot bunkers to give this course a particularly wild look. It hosted the 2013 Scottish Open to great acclaim, with its par-5 finishing hole serving as the stage for some late drama from Phil Mickelson. It would be the northernmost Open Championship site by far, which would up the possibilities of seeing the sort of volatile weather that golf fans love to watch the pros play in. Also, the Open rota could use a truly modern course for variety's sake. Will we see Castle Stuart awarded an Open in the next couple decades? We hope so.

Located practically next door to Muirfield, Gullane has three courses on-site. Location: check. Open-caliber infrastructure: check. The European Tour recently announced the 2015 Scottish Open will be held at Gullane over a composite of holes from courses 1 and 2. Worthiness to host top-level professional golf: check. Good reviews from that event will surely stir talk of a future Open, especially if Muirfield’s current policy of male-only membership becomes a sticking point against its continued presence in the Open rota. All three courses start from the town and play out toward the sea before returning back to the town, echoing The Old Course's charming routing. Also, greens fees at Gullane’s courses are much lower than any other current Open course, making them affordable by a wider range of people.

Every now and then, voices will rise in support of the R&A awarding Royal Porthcawl, Wales’ foremost links, an Open. With Northern Ireland's Royal Portrush reentering the rota in 2019, now is the perfect time for the R&A to continue to promote the entire United Kingdom by virtue of its Open Championship site selections. Needless to say, we would be in favor of an Open in the 2020s at this rugged old site which has hosted the Women's British Open, British Amateur and Walker Cup and ranked in the top 50 best courses outside the United States by Golf Digest. A bit of lengthening of the golf course might be required for the pros, but that happens practically every year throughout the rest of the rota. There are also mild concerns about Porthcawl accommodating the crowds for an Open, but there's no reason why the R&A couldn't do what the USGA did to make a U.S. Open at Merion work in 2013. Porthcawl hosts the Senior Open Championship this week; we hope it ultimately serves as a trial run for a future Open.

What course(s) do YOU think would make great Open Championship sites?

Jim J: you are wrong! Yes it is The Open Championship, but it is run by the R&amp;A, who run the game in the UK, and will only stage their Tournament in Great Britain. That rules out all courses in Eire.
Porthcawl would be an excellent addition to the rota, as well as Portrush, allowing The Open to be held in England, Scotland, Wales and Northern Ireland. Plus the addition of these two will mean a rota of 11/12 years, ideal.

Not a chance for Trump International I think. It's too 'young', the fairways aren't 'links' type at all and the dunes being SSSI just can't be ignored. The comment 'at the end, so what, it's television that matters' is simply ludicrous (maybe it was intended to be). So unless 'big money' in some way trumps tradition at the R&amp;A, which is highly improbable, no chance for Trump.

Obviously courses in the Republic of Ireland won't qualify to host the The Open. It's the (British) Open.

I'm more than happy to leave the choice of courses to wise heads at the R&amp;A. They may be 'fuddy duddy' traditionalists but I think that's a very good thing so far as The Open is concerned.

Maybe playing The Masters on different courses is another idea that uou may wish to pursue?

Lahinch, Ballybunion, &amp; a few others mentioned are in Ireland, therefore not British.

Kevin Markham, Chuggers, nick b, and John are INCORRECT. The oldest world championship in SPORT can be played in the Republic of Ireland, or in France, or in Portugal, or in Canada. IT IS NOT CALLED "THE BRITISH OPEN," DAMMIT! It is called THE OPEN CHAMPIONSHIP. Always has been, always will be. In fact, the Chinese announcers for last year's Open suggested that the official Chinese name be changed from "Yingguo Gongkai Sai"（英国公开赛）to "Shijie Gongkai Sai"（世界公开赛)，since it is the first open championship in any sport. The official Chinese name translates into "United Kingdom Open." Their suggestion translates into "WORLD OPEN." I couldn't agree more.

Sorry, Tom Morris, but that's simply not the way it works. Yes, the GUI is the governing body of Ireland's 4 provinces, but they have no say in the operations of the R&amp;A. We're talking history and geography here. Ireland and Northern Ireland are different countries, and the R&amp;A are only interested in the Northern one when it comes to The Open Championship.
As for Trump Aberdeen... it's the same thing... it's up to the R&amp;A and not Salmond and the government. And let's not forget how the Scottish government out played Trump on the wind farm situation. An Open may be played there, but not for a long time. One suspects that's one of the reasons that Trump bought Turnberry.
Finally, it's Doonbeg, not Dunebeg... although it is now called Trump International Golf Links Ireland - one of the world's catchiest names.

What's the difference between Portrush or County Down hosting the Open and the rest of the great links courses on the island of Ireland. There is only one golfing body in Ireland, the GUI which governs golf in Ireland. Note the Irish Open is played throughout the island including Portrush. Hence, the precedent is set.
Trump Aberdeen will host a future Open as such a huge investment is not without sound commitments. The same economics apply to Trump Dunebeg for hosting an Irish open.

Thanks to Chuggers for pointing out the obvious (on this side of the Altantic anyway) - The Open Championship will never be held on Ballybunion, Lahinch or any other Irish course because Ireland is not in the UK. Only Northern Irish courses qualify.

Royal Dornoch is always being mentioned as a perfect golf course to host the Open, but it is considered to be too far away from anywhere and would never have the infrastructure to cope.

I wouldn't want to see Trump Aberdeen host The Open in a million years. I suspect the R&amp;A won't either. Such an old organisation, firmly rooted in tradition and process is not about to welcome a new course - let alone Trump - into the Open family. Same applies to Castle Stuart. They'll stick with the old courses - so Gullane and Royal Porthcawl are strong choices... and Royal Porthcawl has a real shot after Royal Portrush has been added to the rota.

Royal Aberdeen could be added to the list, too.

How about Royal Dornoch in Scotland? I believe this is one of Tom Watson's favorite British Isle courses.

lahinch, ballybunion and RCD could never host a Open simply because they don't have the room to host all the TV and merchandise venues needed at an open. Portrush does have the space down the first fairway and over the road in the caravan park. Lahinch and RCD don't have driving ranges either. Ballybunion could host as they can put all the tv and merchandising on the second course.