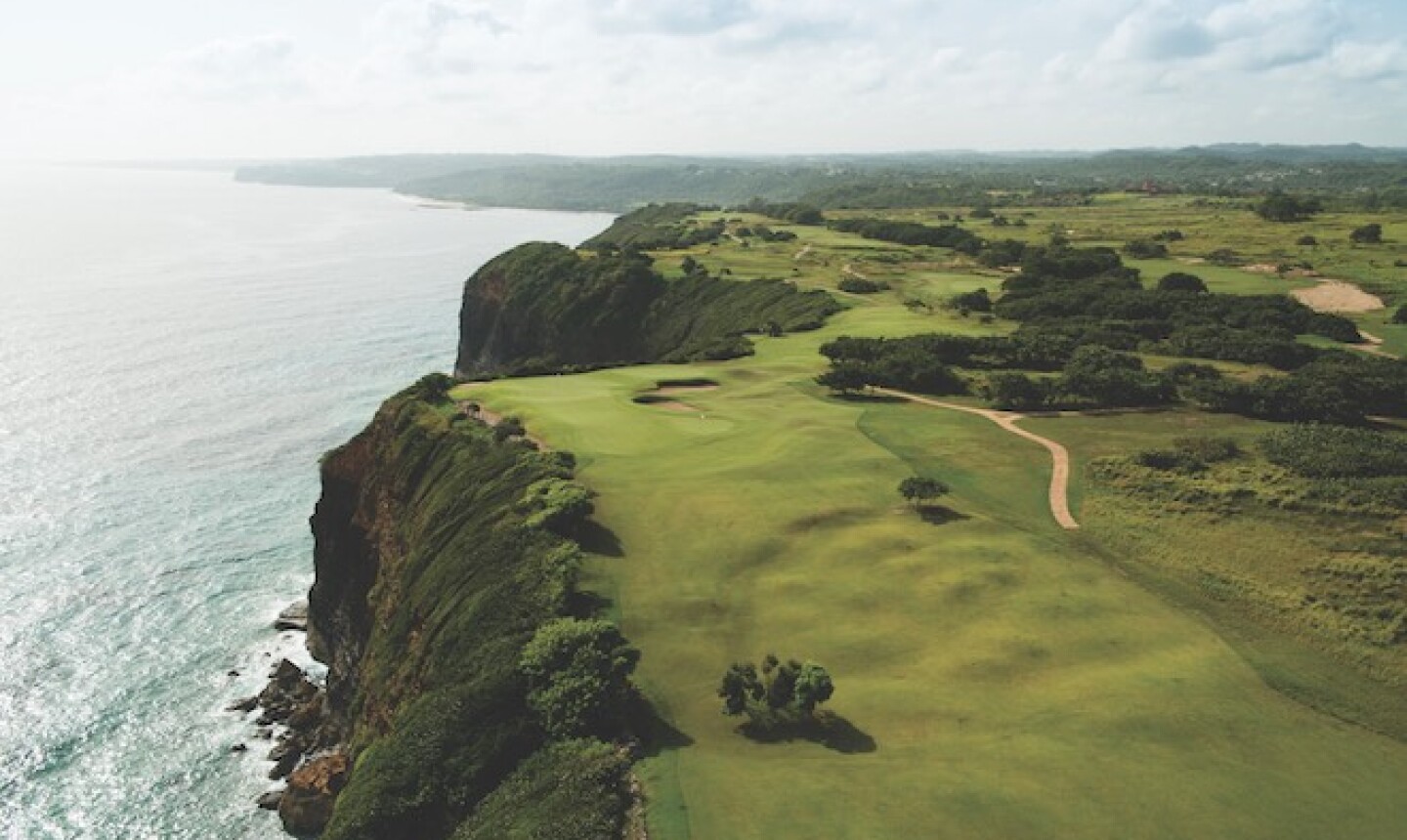 Royal Isabela is a shining example of how an amateur golf course architect can succeed (with a professional helping hand). Joann Dost

If you have even a passing interest in golf courses and golf course architecture, chances are names like Donald Ross, A.W. Tillinghast, Robert Trent Jones, Tom Fazio and Pete Dye are pretty familiar to you.

But what about George Crump?

These three men designed three courses known as some of the very best in the world, and yet these were their only forays into golf course architecture.

But we've uncovered some of the best amateur-designed courses you can (and should) play:

Royal Isabela is one of the best-kept secrets in the Caribbean. For those seeking quiet luxury with golf as a main activity, it is a near-perfect retreat. Visitors and members have brothers Charlie and Stanley Pasarell -- former pro tennis players -- to thank. Granted, when designing the golf course, the Pasarells did not go it completely alone; they were assisted by experienced architect David Pfaff in laying out the course. But since Pfaff passed away in 2013, the Pasarells have continued to make changes to the course, and are said to want to build one or two more courses on the property in time.

Tidewater Golf Club - North Myrtle Beach, S.C.
Ken Tomlinson is not a household name in golf course architecture circles. Nor should he be - he is a longtime area tax attorney by trade. But his foray into golf course architecture (with Rees Jones having worked on the initial routing of the course) has endured as one of the best few courses in the entire 60-mile, 100-course, "Grand Stand." The setting of the course certainly does not hurt - long-range views across the marsh to Cherry Grove Inlet on the east side of the property and more wetlands scenery on the western edge add great character to the course.

There are a number of worthy golf courses not far from the Strip in Las Vegas. So why do so many visiting golfers make the 90-minute journey to Mesquite for at least one of their rounds when visiting for a golf vacation? Because the scenery at Wolf Creek has to be seen to be believed. Developer Dennis Rider let the course take full advantage of the site's many dramatic ups and downs, as well as mountain scenery in the distance. The course is utterly unwalkable - five holes feature drops of more than 100 feet off the tee - and very difficult, with a slope of 154 from the back tees. Nevertheless, Wolf Creek's aesthetics make it worth seeing pretty much no matter what. In fact, it is one of the courses you can play in the new EA Sports golf video game.

Pebble Beach Golf Links - Pebble Beach, Calif.
Sure, much has changed at Pebble Beach since Jack Neville and Douglas Grant's initial version in 1919, but the bones remain largely the same as when the two well-respected amateur players were dispatched to carry out the wishes of notoriously thrifty early developer Samuel F.B. Morse: a spectacular and popular seaside golf course whose grass could nevertheless be kept at an acceptable length by grazing sheep. Neville and Grant's single greatest contribution here is the legendary 100-yard par-3 seventh, which many more experienced latter-day architects have admitted they would likely have dismissed as a possibility.

The Classic at Madden's - Brainerd, Minn.

Even though this course was laid out by superintendent Scott Hoffman (with some help from the late Geoffrey Cornish), you'd never guess it - strategy, challenge and scenery all combine at the Classic to form a golf course that justifiably features in many publications' top-100 lists for public and resort golf courses. Its location in the "Land of 10,000 Lakes" is fitting - water hazards come into play on all but three holes.

Of course, there's a flipside to all this - there's a reason architects get paid significant sums to design golf courses. The five courses listed above are exceptions that prove the rule: if you have the money to built a golf course, it's worth it to shell out the extra funds to ensure it's done properly.

If developer Mike Nemee and wife Michelle had taken this advice, their ill-fated Trinitas course northeast of Stockton, California might still be around today. As it was, they designed and had the course built without first obtaining the proper permissions (a factor with which professional architects are almost universally very familiar) from Calaveras County.

While open, the course received mixed reviews - the scenery it enjoyed was stunning, but many golfers labored to get through the punishingly difficult course. It was forced to close in 2012, only four years after it had opened.

What are your experiences with amateur-designed golf courses? Any hidden gems we haven't mentioned? Any absolute stinkers you recommend avoiding? Read what your fellow subscribers are saying and chime in below!

Wasn't Oakmont in Pittsburgh designed by an amateur originally ? I realize it has been tinkered with many times since by professional architects but in some ways resembles the original as all the trees were cut down several years ago

Rich Harvests Farns in Sugar Groce, Illinois. Jerry Rich hired a names, didn't like what he was doing and did it again himself. How good is it? Good enough for a Solhiem Cup and several big amateur tournaments. Jerry is a great guy, passionate about golf and supports the game in many, many ways

There is a gold course in upstate NY called Kingswood. The designer was the land owner who decided the area needed a good public golf course. Something sorely missing in southern Warren County.
The front nine plays on relatively flat terrain. While the second nine is more hilly. Holes 14 and 15 offer a beautiful view of Vermont's Green Mountains some 40 miles distant. The course is well maintained with bent grass fairways and greens. The rough a mix of Kentucky Blue Grass and Fescue.
This area has a relatively short golf season ( April through the first snowfall) and one would expect rates to be higher.
There are no tricks in the layout. Its a fun golf course.

I have had the honour of working with Jack Nicklaus, David Maclay-Kidd and some of the top S African architects. Everything depends on the piece of land and how this can be moulded into a workable golfing solution. Many had their designs dictated to by the developers who wanted the best land for residential houses enabling them to sell their properties (understandably). Unfortunately the boom came to an end and a lot of them have collapsed.

Annbriar Gplf Course in Waterloo, IL, just outside of St. Louis, is a beautiful course designed by a family in memory of their deceased daughter - quite a story worth investigating.

Thank you for the wonderful recognition of Royal Isabela.

My brother, Charlie and I feel humbled and forever indebted to our good friend, David Pfaff. We miss him.

David was a perfect architect for us to work with. He was hands-on, visionary, talented and above all an incredibly caring and sensitive human being. Those who met him couldn't help but befriend him instantly. During our interview, it took me less than a minute to know he was the one. He also endorsed our conservation efforts to protecting our flora and fauna.

To provide water storage, we had to move 225,000 cubic yards of material. While a large number, it pales in comparison to the 2 to 3 million cubic yards moved by today's standards.

While David was still with us, my brother and I routed four more courses. Currently within Royal Isabela's 500 acres we have 21 holes and room to add another 17. Also within 1,500 acres of adjacent land, we've planned to add more golf. In total we should have 90 golf holes!

Again, thank you for the wonderful article.

Stonelick Hills just outside of Cincinnati is one of the best tracks in the area - and designed by an amateur with a passion. It rewards good shots, encourages risk/reward, and plays to all different levels with an assortment of tee boxes. Greens are fair, true and reasonably fast, never tricked up. A joy to play with nature all around and an occasional glimpse of civilization.

I also have to disagree with Keith on Wolf Creek. I was enticed to play it after seeing the unbelievable holes on line. I was not only "blown away" at the scenery and how the holes were placed on this "moon like" landscape, but I also found it to be an exceptional golf course. Each hole is unique and I thought it was fair. Its a must play!!!