The sun is setting on one of Pete Dye's golf courses

After years of speculation, the affordable ASU Karsten course in Tempe will officially close in May.

A day that many have long dreaded has finally been announced. The Arizona State University Karsten Course in Tempe, Ariz., will close in early May.

"ASU Karsten was built in an era when high-end daily fee golf in the Valley really took off," said Mike Conner, original general manager of the golf course and vice president of OB Sports, the facility’s management firm. "The golf course not only hosted ASU’s golf teams and phoenix-area residents, it also hosted hundreds of thousands of winter visitors looking for a quality golf experience."

The former home of the Arizona State University golf teams and campus golf course named for the late Karsten Solheim, who founded Phoenix-based Ping Golf, will finally close after being open for nearly 30 years. Designed by Pete and Perry Dye, the course opened in 1989, not only providing a place and home for ASU's golf teams but also a very affordable golf option for the public.

The closing comes as a result of developing ASU's 330-acre athletic facilities district, now called the Novus Innovation Corridor. Created in 2010 by the Arizona Legislature, the complex will feature athletic fields, new practice facilities for the school's football team as well as the relocated ASU track stadium. 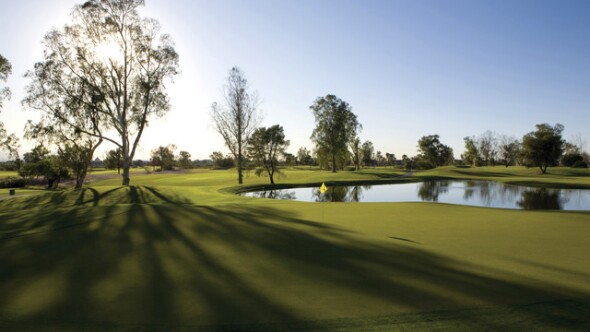 Articles
4 Min Read
Facelift brings back glory of old Papago Golf Course in Phoenix -- but with modern flair
Now with modern greens, a 21st-century irrigation system and a little more length, Papago Golf Course in Phoenix has become a lot more than a shell of its former self; it's been reinvented. Come spring, when Papago has a chance to fill in a little, demand for tee times will probably be high.

Losing the Karsten Course is certainly a blow for golfers who enjoyed this quirky Dye design that could be played for as little as $25 in the offseason. As one reader, Dwhite083, remarked in his review: "Great price to play summer golf at ASU's old stomping grounds … Very hilly course and driving the ball well is a must. You really have to think your way around this course."

While the ASU Karsten Course rates at 3.9/5 stars over the past six months on Golf Advisor, I will miss it. It was a great option right off the plane since it's located just minutes from Phoenix's Sky Harbor International Airport. There are drivable par 4s, lots of water and sand and the clubhouse was a museum in itself, paying tribute to the players of past ASU golf teams, including Mickleson, Billy Mayfair and the late Heather Farr. It's also not a desert course with wall-to-wall grass, most of it cut to fairway height, and a fun layout. It isn't overly difficult, but while the college game has outgrown the 7,022-yard design, it is still not a pushover. In other words, it's a course that made the most out of its fairly featureless property and really does cater to all levels.

But Papago is a step up. It was renovated 10 years ago and opened one of the best clubhouses in the country (Lou Grubb Clubhouse and Lou's Bar and Grill) last year. Everyone can get it around the versatile layout, a William F. Bell design that sits at the base of Papago Buttes, where you can see Phoenix skyline. Its biggest challenge is the greens, which were running about 12 feet on the Stimpmeter back in December and have plenty of slope. Get above the hole, and it's a real challenge to two-putt or even keep it on the greens at times. Papago's new clubhouse is now one of the valley's coolest 19th holes with a terrific bar menu, regular live entertainment and the best practice facilities in the area (and that's in addition to the ASU complex).

While we’re saddened the course will no longer be enjoyed by golfers from around the world, it remains important to Karsten’s legacy and we’re excited to be part of ASU’s commitment to the amazing new facility at Papago.

John A. Solheim, as quoted in AZ Central

As for all that memorabilia at ASU Karsten, much of it is coming over to Papago, including the statue honoring Farr, who played briefly on the LPGA Tour before succumbing to breast cancer at the age of 24 in 1989. The statue, which used to be on the 10th hole at Karsten, is now at Papago and will stand next to a wall with the history of Karsten Solheim. And the 52nd Street entrance to Papago has been renamed Karsten Way.

The university is also planning ASU commemorative events around Karsten's closing, including a final round golf outing and dinner for those who helped to create the course 30 years ago.

"While we’re saddened the course will no longer be enjoyed by golfers from around the world, it remains important to Karsten’s legacy, and we’re excited to be part of ASU’s commitment to the amazing new facility at Papago," John A. Solheim, PING chairman/CEO and son of Karsten Solheim, was quoted in a story by AZCentral.com's Jeff Metcalfe. "They’ve done an incredible job with The Thunderbirds Golf Complex that will elevate the ASU golf programs even higher."

ASU will also host the men's and women's NCAA Championships from 2020-2022. But that will come at nearby Grayhawk Golf Club in Scottsdale. Televised by Golf Channel, it will mark the first time a university and a golf course will host the championships for three straight years. It will be contested on Grayhawk's Raptor course, a par-72, 7,090-yard Tom Fazio design. The Raptor is the former host course of PGA TOUR’s Frys.com Open (2007-2009).

In the meantime, you can still book tee times at ASU Karsten. On GolfNow, green fees currently range from $52 to $80 during prime season.

I feel like I'm sadder than I should be for a course closing. Attended grad school at ASU in the mid-late aughts and this was definitely my "home" course, because of the price and simply because it was a great course. I've likely played this course more than any other single course in my life. I made a rare trip back to the valley in January and am so glad I got to play one last time.

I was one of the first to have the privilege on playing ASU Karsten course back in the day, & I was just in Scottsdale visiting after being away for 27 years & had no idea it was closing. I remember Papago well though as I had to qualify there for the 91 Phoenix Open.....very sad.... I would have love to have played it one last time.....

The ASU KarstenGolf Course is one of my all time favorites. I love the challenging tee shots and the wonderful green configurations. The 18th is still the toughest finishing hole in golf for an amature. Goodbye, my friend, you will always live in my golfing memory. I will certainly miss the opportunity to play on your fairways and greens.

Living on Vanburen St with the 14th hole out our window we’re looking forward to playing Papago when we come and visit.

I will always remember ASU golf course. Played around 1992/3 with our golf pro from Rossmere CC Craig Yahiro, his dad Frank and the infamous Alice Cooper, who Craig had caddied for in the Bob Hope. Hills so high I sent my buddy to the top of it to give me an idea where the green was. Papago I enjoyed also so it sounds like a win/win for ASU.

played it earlier this month. Still a great layout for those of us that play shorter tees. I had heard rumors that it might close, so I'm glad I got to play it

You can add 'affordable golf' to George Carlin's famous list of oxymorons.