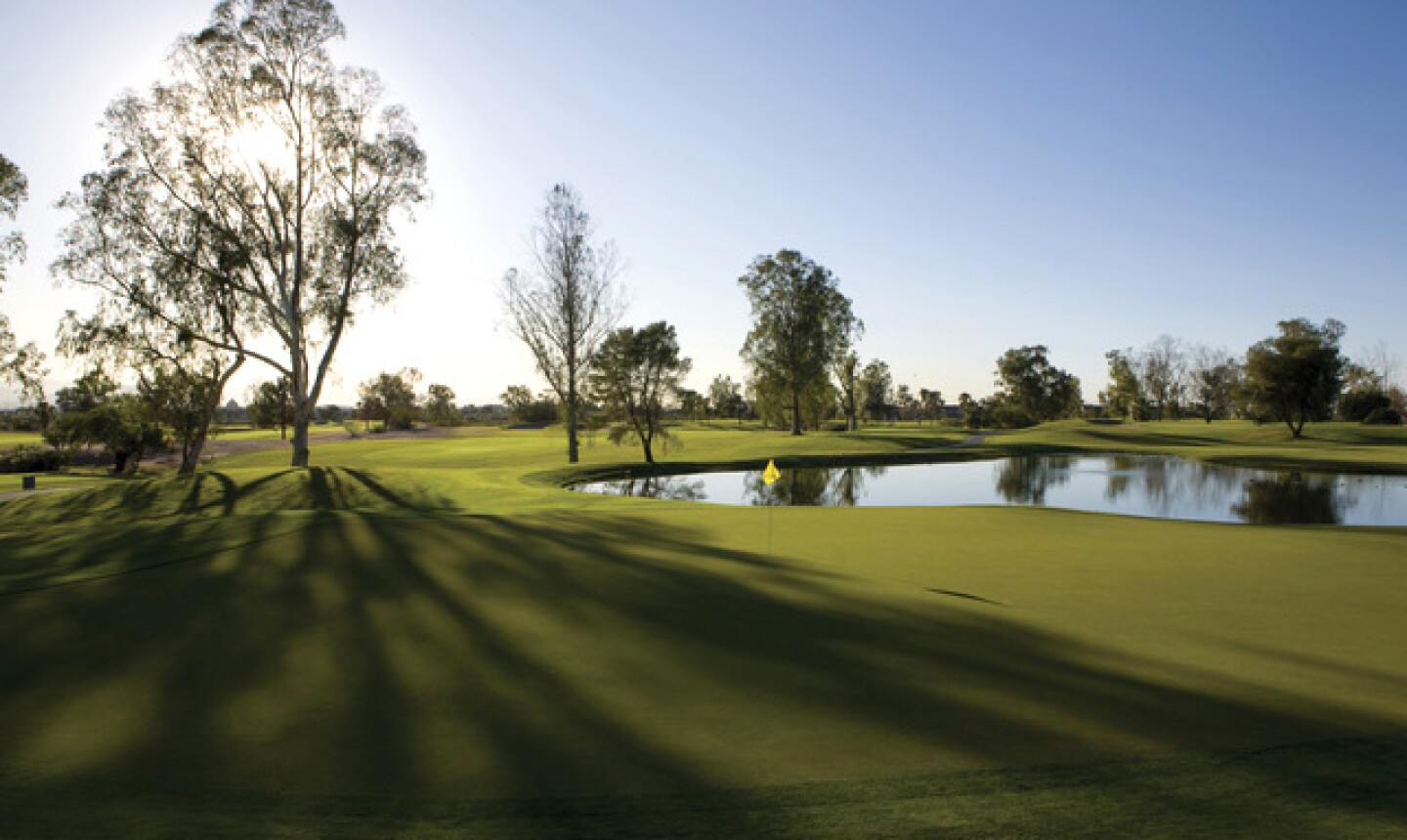 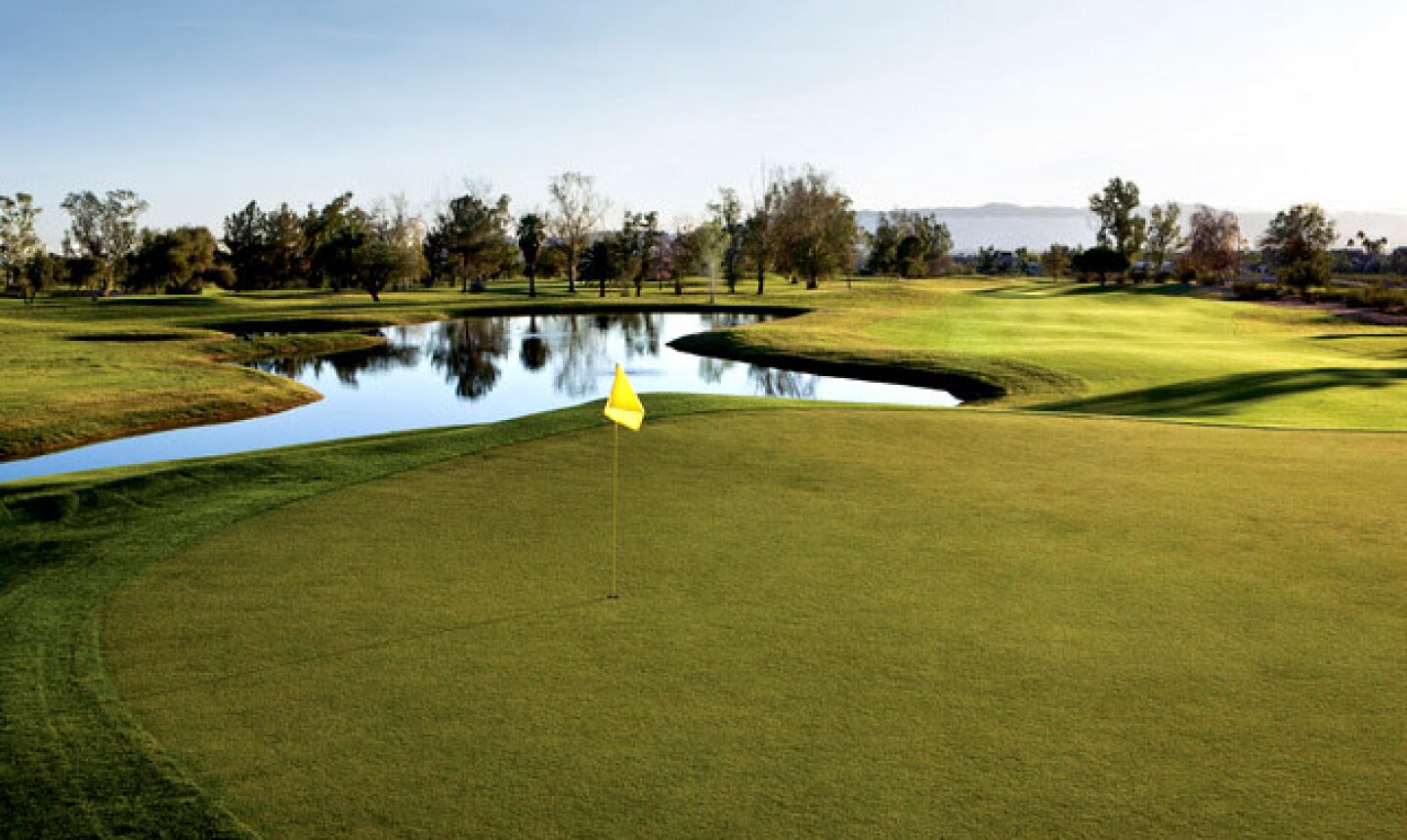 The 525-yard ninth at Papago Golf Course is the prototypical risk-reward par 5 with water. Tony Roberts/Courtesy of Papago G.C. 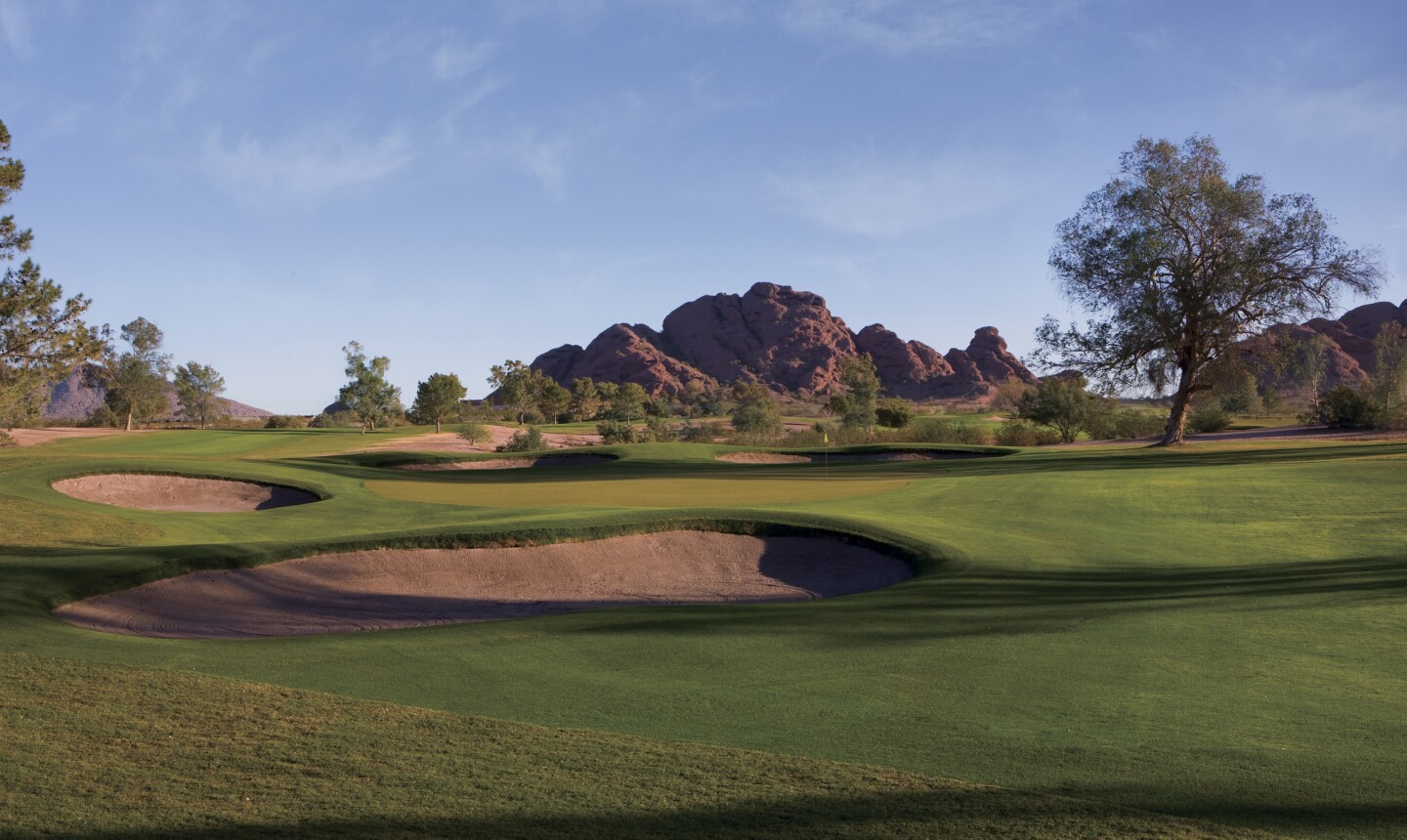 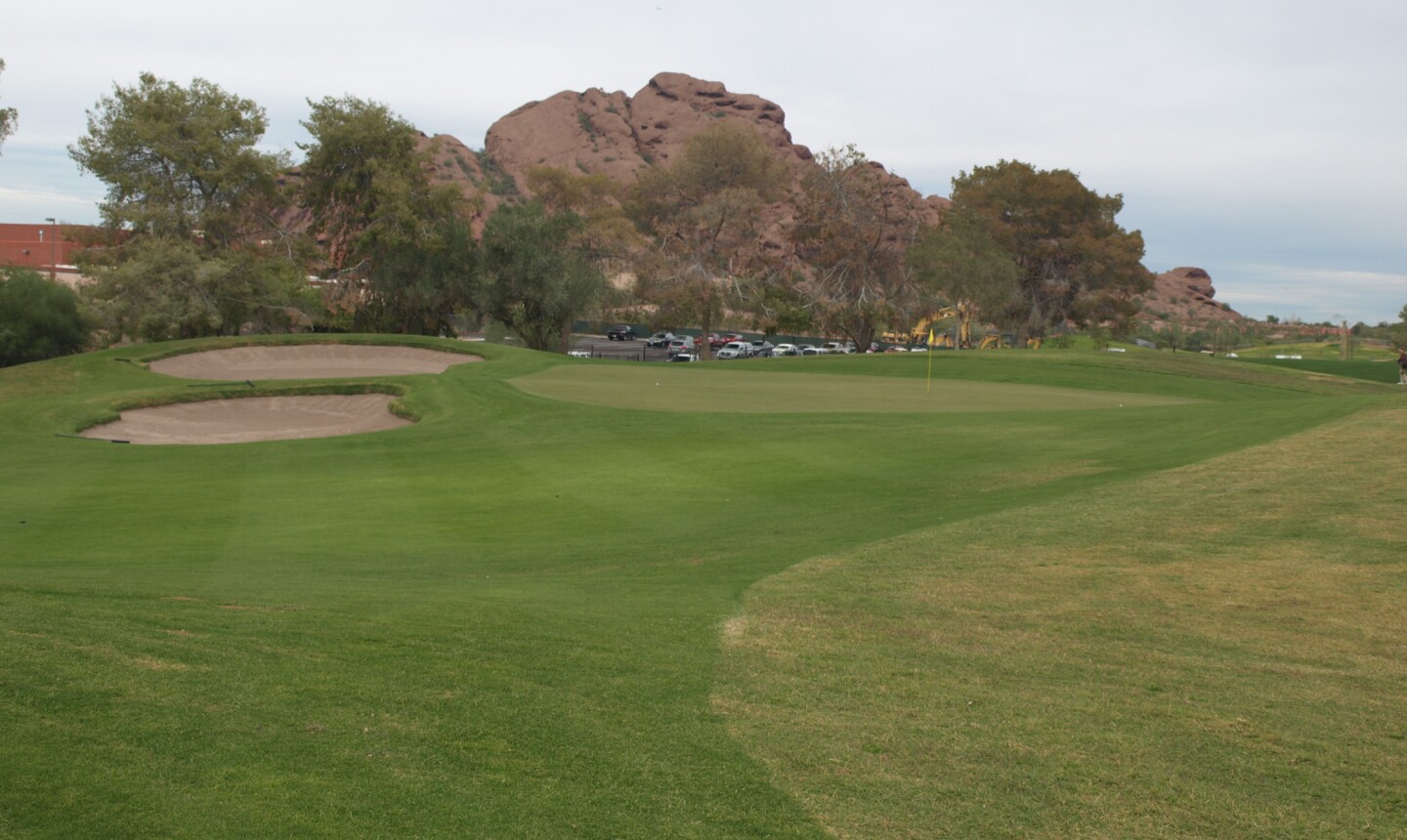 PHOENIX -- There was a time when Arizona golfers used to spend the night in their cars for a weekend tee time at Papago Golf Course in Phoenix. Those days have been gone for quite some time. The years, and 100,000 rounds a year, had not been kind to this 1963 William Bell classic. It was time for major reconstructive surgery.

This month, after a six-month operation and recovery, a more youthful Papago was unveiled. Now with modern greens, a 21st century irrigation system and a little more length, Papago has become a lot more than a shell of its former self; it's reinvented.

Papago now has four sets of tees, and this par 72 provides a true championship test from tips at 7,333 yards, harkening memories of its past when it hosted the 1971 U.S. Amateur Pub Links and countless Phoenix Open qualifiers.

It remains to be seen if anyone will camp out for a tee time here with all the new golf courses that have been built in the area in the past two decades. But come spring, when Papago has a chance to fill in a little, demand for tee times will probably be high.

Bell, by the way, is the same architect who designed Torrey Pines Golf Course in La Jolla, Calif. That one was renovated as well, most recently by Rees Jones, who prepared it for the 2008 U.S. Open.

For Papago, the task fell with Billy Fuller, a former superintendent at Augusta National who formed his own design company, Billy Fuller Golf Design, in 2003. Not only did he bring back Bell's classic bunkering and greens complexes, but he added a few agronomic touches, which should propel the course into the next few decades or so.

The $5.8 million restoration project is a result of a partnership between the City of Phoenix, the Arizona Golf Association, and the Arizona Golf Foundation, a non-profit arm of the AGA. The project is being managed by the Golf Guys, LLC, under the direction of Marvin French, one of the principals at the highly acclaimed Pumpkin Ridge Golf Club in Oregon.

Fewer trees, for one

Trees can make or break a golf course, and in the case of Papago, the abundance of them was starting to do the latter. For one, their canopies can make it difficult to grow grass, especially on greens. And in the case of Papago, they were obstructing the views of the nearby Papago Buttes, which are now visible from nearly every hole after 400 trees were removed. The tree removal also helped with the views of Camelback Mountain, South Mountain and downtown Phoenix.

Speaking of the greens, they were rebuilt to USGA specifications. Fuller also restored them to their original sizes and shapes. Over the years, they had lost some 30 to 40 percent of their surface area.

The greens are also now Mini-Verde, an ultra dwarf that has gained popularity in the Southeast because of its hardiness, smoothness and cold-tolerance in the winter. The new greens will be overseeded next year when they are more mature and can handle the competition from winter grasses, according to General Manager Albert Murdock. But as late as December, when the course reopened, they still seemed to be actively growing -- despite the cool nights -- and were perfectly green. All but a handful were already in excellent shape.

The lakes on Nos. 9 and 11 were also restored, not only to be more aesthetic and strategic but to also feed the new irrigation system. The course also got a more expansive driving range.

New tee boxes on holes 1, 9 and 11 added nearly 350 yards to the course to accommodate today's equipment and players, yet Papago Golf Course is very playable by all levels. Unlike most courses in the Phoenix area, this isn't desert golf; it's parkland golf. Miss a fairway and chances are you get to hit it again as it lies. There are legitimate recovery shots throughout the course, bringing all kinds of options into play.

Papago has a classic risk-reward short par 4 in the 322-yard 12th (yes, the desert can come into play here) to ready you for a pretty good finishing kick that truly starts with the 585-yard, par-5 15th. Not only is 15 long, but the green is well protected by three bunkers and ample slope between pin locations.

The 442-yard 16th has two fairway bunkers along the right side to force players to work the ball down the left of the fairway or lay up short of the bunkers for a tougher angle. Then there's the 243-yard, par-4 17th. The new green here is no longer a blind shot from the tee, and there's a new fore bunker that hides the front left green area and two new bunkers to frame the back of the green to enhance the target.

Finally, the uphill, 464-yard, par-4 18th is a terrific finishing hole. You need length as well as accuracy here on this uphill fairway that turns to the right.

Papago Golf Course is much improved, and it still takes you back to the good old days. Play the right tees, and the course should be enjoyable for any player, and the tips are a pretty stiff test.

The course is also very scenic now, with the views of the buttes, surrounding mountains and city. Removing the trees really did open up the course. 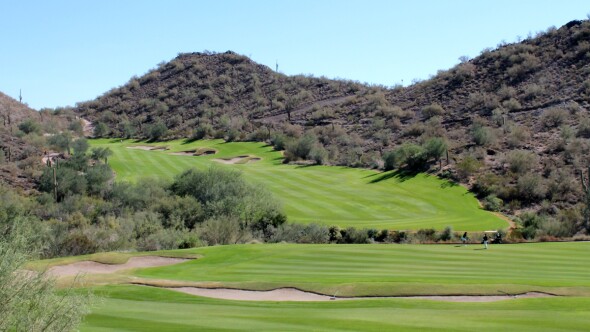 Articles
Phoenix/Scottsdale's Arizona west-side story is all about golf value
When sizing up golfing locales in the Phoenix metropolitan area, west will never be considered best. That doesn't mean there's no reason to find out what's on the other side of I-17. The West Valley can't compete in terms of quantity, but courses such as Golf Club of Estrella, Quintero, Raven at Verrado and Trilogy at Vistancia stack up with what's being offered across town. If you're building a golf trip on a budget, your buck will go a lot further "way out west.
3 Min Read

By Wes Gilbertson
More from the author