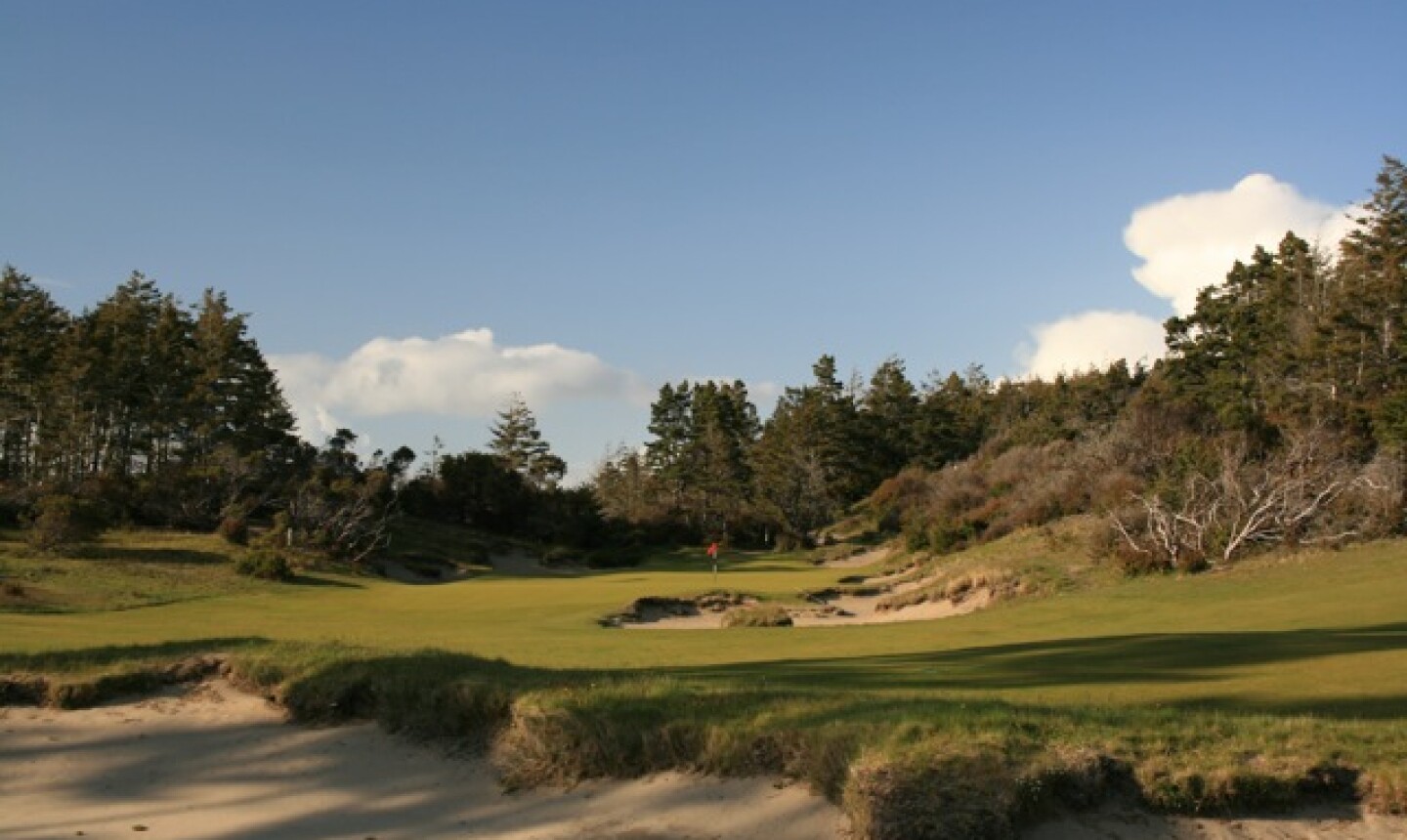 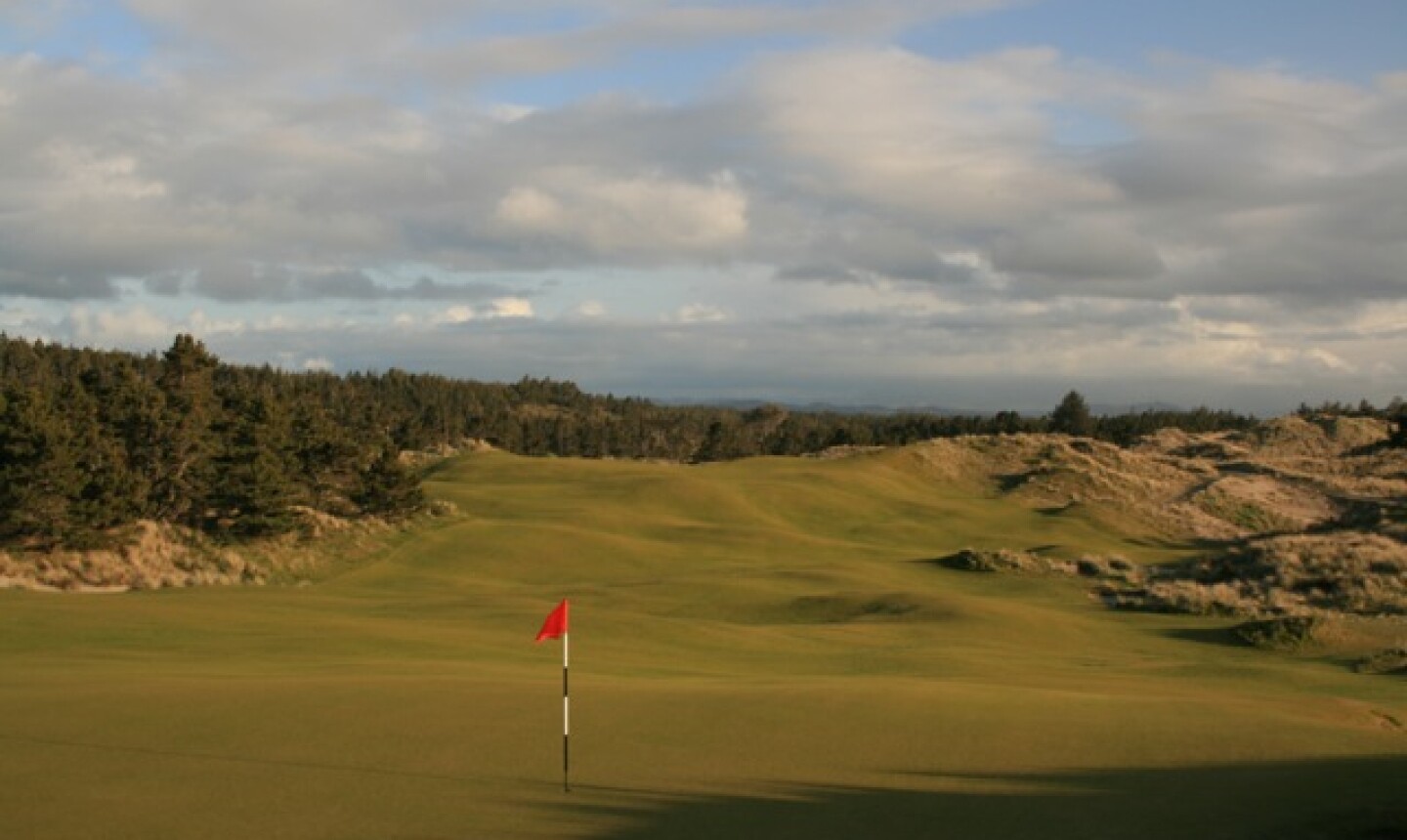 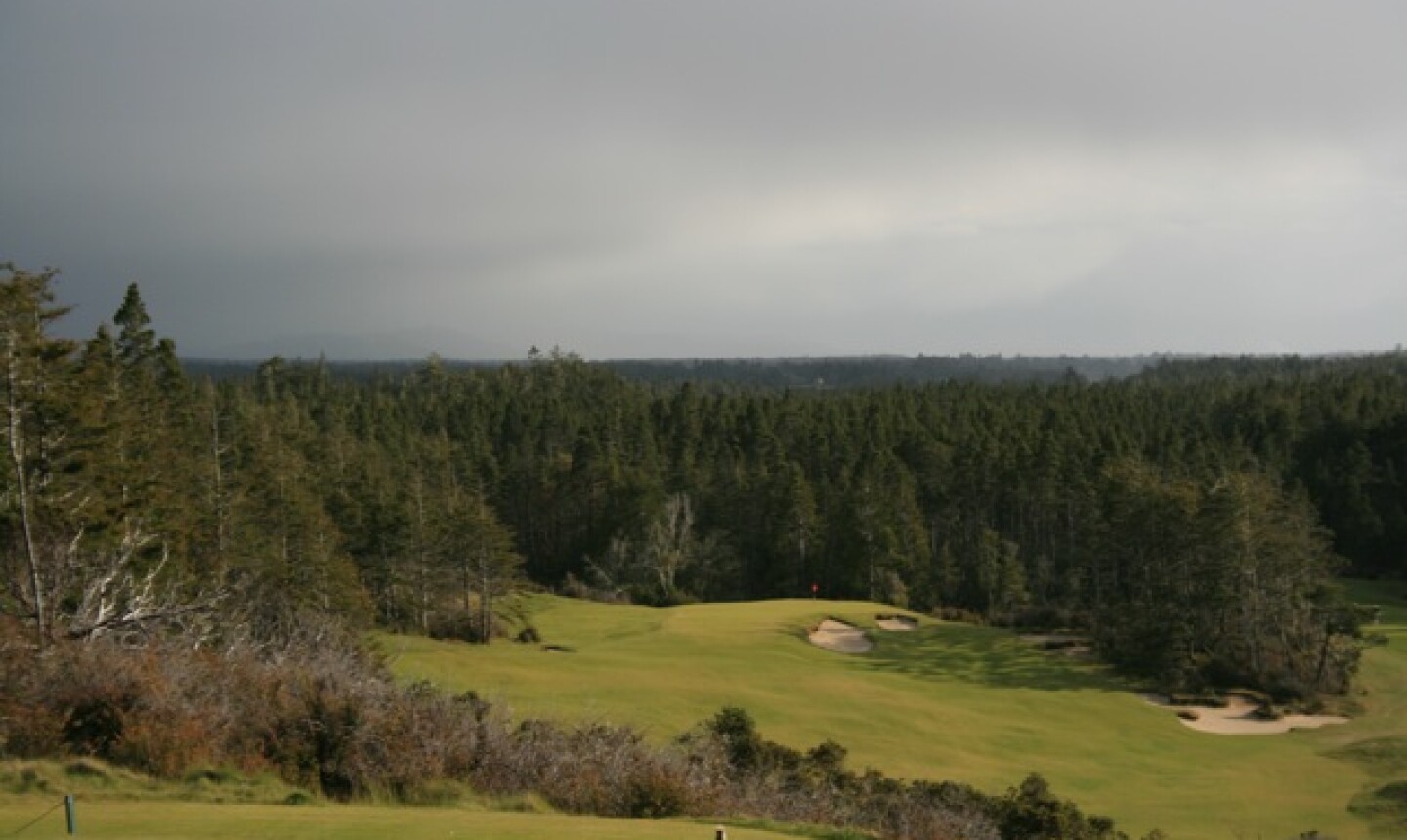 One of the resort's most exciting tee shots is on the short, par-4 14th hole at Bandon Trails. Brandon Tucker/Golf Advisor

BANDON, Ore. - Few golf courses in the world can be considered one of a nation's best - and also the least prestigious of three courses at its resort.

Such is the case with the new Bandon Trails course at the Bandon Dunes Golf Resort on the west coast of Oregon. Put this new scenic and exciting heathland in 99 percent of golf resorts around the world, and it's the marquee course. But thanks to its sterling older siblings, Pacific Dunes and Bandon Dunes, Bandon Trails serves nobly to some resort goers as "the one that's not on the ocean."

But listen to this logic and you'll miss out on some of the most scenic and exciting parkland holes in the country.

Despite its setting farther inland, Bandon Trails shares the same theme of each of the three courses at the resort. It's walking only, and designers Bill Coore and Ben Crenshaw moved little earth laying it out.

The playing style is the same too. Though coastal winds are shielded from tall pines on most holes, the course was seeded with wall-to-wall fescue, promoting a links-style ground game. There is the occasional tee shot where the landing zone is partially blind, and pot bunkers can stealthily swallow up tee shots.

Aesthetically, Bandon Trails features several shifts in environment. The first two holes play on wide-open dunesland overlooking the coast in the distance. From here, the course weaves into dense forest, playing up-and-down a hillside, then weaving back around low-lying meadowlands. The bulk of the property plays shielded in trees, but the course opens back up on the remaining holes and plays on rugged dunes once again on the 18th.

The greens are consistently a course unto itself: massive in size and perplexing in slope. The greatest example is the short par-3 fifth hole, which is practically all green. It's just 110-130 yards, but pin position on this multi-tiered green will determine your club selection by up to two clubs. Find the wrong tier with your tee shot and two-putting here may be your greatest feat of the trip.

Also like each course at the resort, Bandon Trails has a handful of mouth-watering short par 4s. The par-4 eighth hole is narrow, but just 300 yards long and roomy in front.

But the real diabolical shorty is the 14th. From a tee shot elevated enough to see out over the coast, the hole plays downhill to a sloping fairway left to right, before playing back uphill to a redan-style green, sloping front-to-back. It's the kind of hole where you can't fake finesse, and a steep bunker to the right will destroy your short game confidence.

Any golfer visiting Bandon Dunes should be willing to sacrifice at least one round off its coastal links courses and play Bandon Trails. You won't be whale spotting here like on the other two courses, but there is plenty of other wildlife running around, and you'll see some of the prettiest parkland holes Mother Nature can yield.

"It's my favorite of the three," said Brandon Hibbs, a caddie at the resort. "When I have a day off I look to see if Trails is open first to play."

Bandon Trails may be easier because it's more shielded from the elements than its coastal neighbors. But its green complexes are especially large and challenging to two-putt. Many of its fairways are pretty wide, so it's tough to lose many balls on a calm day.

Each of Bandon's golf courses carries the same green fee: $210-265 in peak season. They are walking only and caddies are available. Pull carts are free of charge.

Bandon Trails won't be the new kid on the block for long. Old MacDonald, the fourth course at Bandon Dunes, is scheduled to open in 2009.

Bandon Dunes Resort has several accommodation options. The main lodge at the original Bandon Dunes facility keeps you closest to dining and drinking establishments like the Bunker Bar; a fitness center and spa are also on site.

The Lily Pond is located just down the road and across the street from Bandon Trails, where several smaller buildings house comfortable and quiet two-bed rooms with fireplaces and space heaters to dry your clothes.

The great thing about all of Bandon Dunes Resort is the free and frequent shuttles between accommodations, golf courses and dining facilities. You're never more than a couple minutes from anywhere at the resort.

Articles
4 Min Read
The beauty of playing college golf courses
A recent visit to a trio of Midwest courses was a reminder that there's a lot to love about playing golf on campus.

Articles
4 Min Read
'Where my 6 beats your 7 every time'
With a radical concept and engaging design, The Match golf course at PGA National Resort & Spa points toward a more creative future for the game in America.