The new course will complement the redesigned Cabot Barrens and Cabot Oaks courses that will open in December north of Tampa.

The Cabot brand already has golf resort communities in various stages of development in Scotland, British Columbia and St. Lucia, but the Florida site may be its most innovative. A new course routing concept named "The 21" is being laid out by Mike Nuzzo to complement the renovated, more traditional 18-hole Cabot Barrens and Cabot Oaks courses that are scheduled to debut in December on the 1,200-acre property formerly known as World Woods Golf Club.

“We always want to keep the game fresh and exciting,” Ben Cowan-Dewar, CEO and co-founder of The Cabot Collection, said in a statement. “While Mike Keiser and I were looking at the terrain and courses we have in play, the idea was born to shape our 10-hole course and the 11-hole-course into a new 21-hole concept. The 21’s layout beckons golf aficionados who just can’t get enough of the rolling terrain in the Floridian countryside."

Keiser, the game-changing founder of Bandon Dunes, and Cowan-Dewar challenged Nuzzo to fit as many interesting holes as possible into 100 acres. The 21 holes he's laid out feature a number of half-par holes. Golfers will discover a variety of hole lengths, strategies and styles. The contrasts are evident when golfers move from the 560-yard, par-5 fourth hole - created as a tribute to an Irish links - to the 355-yard fifth, where the shaping is reminiscent of Australia's Sandbelt.

The routing can be played as two separate short courses in between or after rounds on Cabot Barrens and Cabot Oaks or as a full 21-hole experience. The par-38, 10-hole routing called "10" will play 2,995 yards with a number of short par 4s. The 11-hole, par-33 routing is called "Aces". It's much shorter at 1,195 yards and will be lit at night.

"We want everyone to argue about where they're going to play in the afternoon," Nuzzo said of the various ways to experience 'The 21'.

Building short courses with a quirky number of holes has been trending ever since the 13-hole Bandon Preserve debuted in 2012. The 17-hole Sandbox at Sand Valley, the 14-hole QuickSands at Gamble Sands and others have followed suit, but this is the first one with such a disparity between the distances of the holes. The shortest hole is 85 yards and the longest 560 yards. The green fee to play 'The 21" has yet to be announced.

What else is new at Cabot Citrus Farms?

Cabot Citrus Farms also announced that it will be launching sales for its first residential offerings, The Cottages, in February. The collection of 36 two- and four-bedroom residences will celebrate historic Florida architecture. Raised scissor-truss ceilings and expansive windows will draw in natural light. The units will be built in a 'Resort Village' either facing the golf course, the 'Main Street' or the natural, wooded landscape. For more, click here.

Kyle Franz is working on the redesign of both regulation courses that used to be Top-100-caliber Tom Fazio originals. All 57 holes on property will play firm and fast unlike most Florida courses. With a rugged look of sand scrapes, Cabot Barrens includes at least a dozen holes with split fairways. Cabot Oaks, which is a collaboration between co-designers Franz and Nuzzo and advisor Ran Morrissett, offers more elevation change, up to 50 feet. Golfers must clear a 40-foot-deep sink hole on the par-3 14th hole.

I loved playing the World Woods courses back when they were in their prime. The modernized versions will likely be even better, adding impressive new additions to a growing Cabot empire. 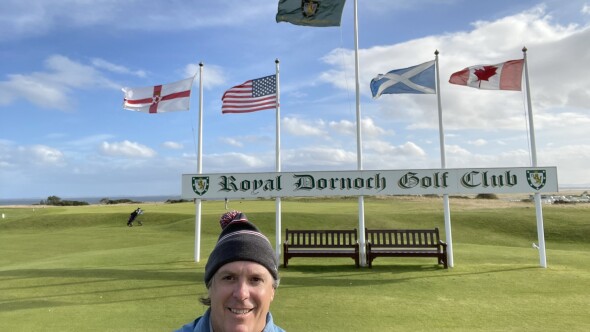 Articles
5 Min Read
Jason Scott Deegan's 2022 Golf Travel Awards
The highlights were many once 'World Golfer' got back on the road again post-pandemic.