The most blatant golf cheating you've ever seen

I think all of golf's 19th holes should pass the collection plate and buy Patrick Reed a Christmas present this year. How many extra pints were bought this past weekend by friends debating his latest confrontation with the Rules of Golf and the goodwill of the sport's fans?

In case you missed it, Reed's latest controversy came in the form of a couple lumps of sand he pushed away from his ball while in a waste area at Tiger Woods' Hero World Challenge last Friday.

A closer look at Patrick Reed’s two-stroke penalty during Round 3 of the Hero World Challenge. pic.twitter.com/z2aqkajnYq

Golf's dreaded c-word - "cheat" - came pouring out of mouths and keyboards everywhere, pointing out that Reed had plainly improved his lie, breaking the Rules (Rule 8.1, to be precise). He was ultimately penalized two shots for the infraction.

The golf gods must have been paying attention, because Reed went on to finish two strokes out of a playoff with outright winner Henrik Stenson. The difference between the winner's check and Reed's third-place finish? $750,000, or roughly a C-note for every grain of sand he pushed out from behind his ball.

Does Reed's offense qualify as out-and-out cheating? Your answer likely depends on whether you think he'd be cavalier enough to knowingly fluff his lie with cameras rolling literally a few feet away from him. If not, he was absent-minded at best (naturally, this is Reed's own defense). If so, he probably deserves some sort of censure. The formal resolution points toward Reed being given the benefit of the doubt, at least this time.

McIlroy: Trying to give Reed benefit of the doubt

Professional golfers claim that cases of blatant cheating are relatively rare at their level of the game. For us amateurs and club players, it seems a little more prevalent.

Earlier this year, one member of the Saturday game I play in was cast out after he was discovered to have moved his mark some 20 feet (no, that's not a typo) closer to the hole on one particular putting green when the other players in his foursome weren't looking...or so he thought.

What made this incident more amusing that the mark-mover often boasted about his wealth and business success, which grated on many regulars. And yet, for all his bluster, here he was trying to put one over on his partners in a combination $10 skins and $10 Stableford points game. Strange and unfortunate, because he was a decent player when he was playing by the book, and pleasant enough when not talking about his material possessions. 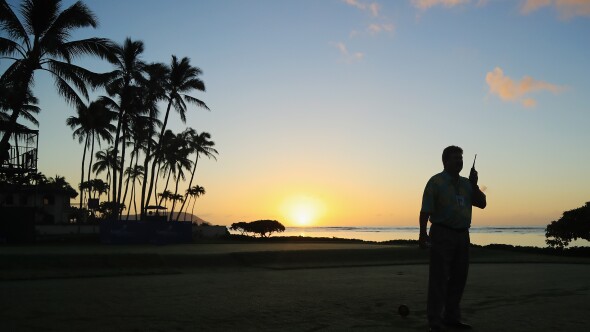 What's the most blatant form of golf cheating you've ever witnessed or heard about? Let us know in the comments and keep your eyes peeled!

Looking for my friend’s ball near thick brush, we spent around 3-4 mins, then I abandoned the search and started toward my ball. Just as I turned away, my friend announced he miraculously found it. I must have spent a minute standing within 5 feet of where he found it. When we got to the green he had committed the ultimate faux pas as a cheater. He teed off with a Titleist and finished with a Callaway. Busted!!

Just watching the WGC, Mexico and noticed that Reed either taps down or uses ball marker tool to make repairs before every putt.

He can only do this for man made imperfections. Looks fishy to me.

Many years ago I was on my high school golf team. A good friend was on another school’s team and we played each other. He hit he’s drive into the trees and brush. We were looking for it when his coach said “Here it is.” , in the middle of the fairway. Both of us looked at each other shaking our heads no. He played the ball in the fairway knowing it wasn’t his.

This wasnt shamrock golf course in Alamance county, NC was it?

The most blatant cheating I've ever seen in my 62 years as a folder and a caddy us Patrick Reed's plowing the sand TWICE. Then he proceeds like he did nothing about it. My question did he sign his score card before he was approached about his cheating?

It is very difficult to concede anything to Patrick on this. To think that he wasn't aware or didn't think it a violation is descending into an abyss of mediocrity. Especially when considering Reed's history of challenging good behavior on the course, he must be held to account. One of the payoffs is the tired comment about, "move on". This usually means, "I don't want to talk about it -let's talk about something else".

Tim Gavrich, why aren't you investigating Tommy Fleetwood's cheating at the Nedbank? All you have to do is review the highlight clips that were on Golf Channel? Why are you blistering Reed's cheating but ignoring Fleetwood's? And Fleetwood "won" the Nedbank, supposedly. You and Golf Channel are both parties in the cover up since you refuse to investigate the obvious.

Worse case of cheating I have witnessed is a golfer playing a bunker shot, ball came out, sand came out and the golfer walked out of the bunker WITHOUT a CLUB!!!!

I too have seen a guy throw a ball out of a bunker....

By Tim Gavrich
Read More
Load More
Popular
Golf helps Las Vegas bet big on becoming the sports capital of the world
5 golf tips that could turn your driver into a strength
2022 U.S. Open Championship: a hole-by-hole-guide to The Country Club in Brookline, Massachusetts
June 2022: Secrets from the World of Golf Travel
Editorial Staff