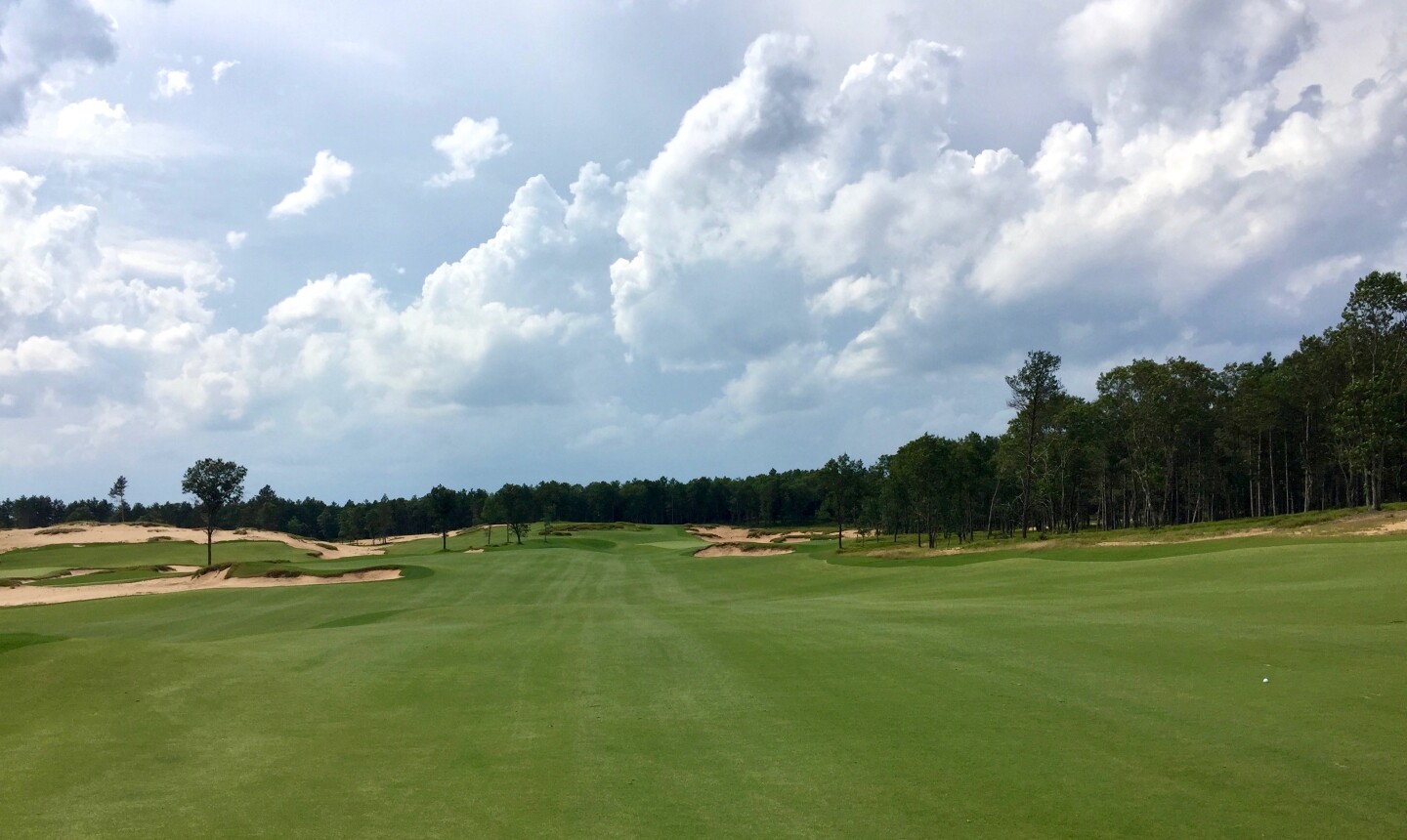 The 15th at Mammoth Dunes is a charming, daring par 5. Tim Gavrich/Golf Advisor 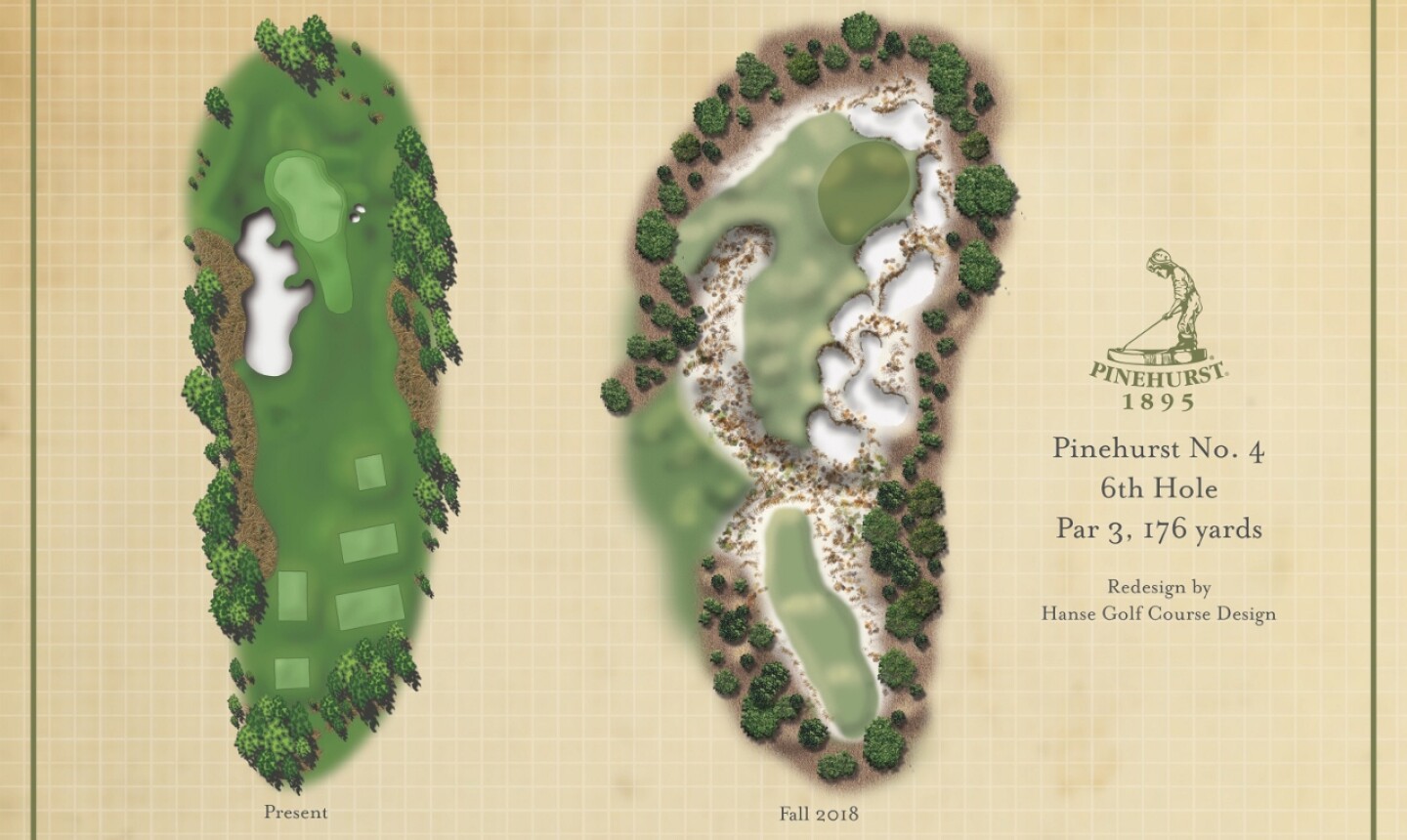 Gil Hanse's fundamental changes to Pinehurst No. 4 cause us to declare it a new golf course. Courtesy of Pinehurst Resort 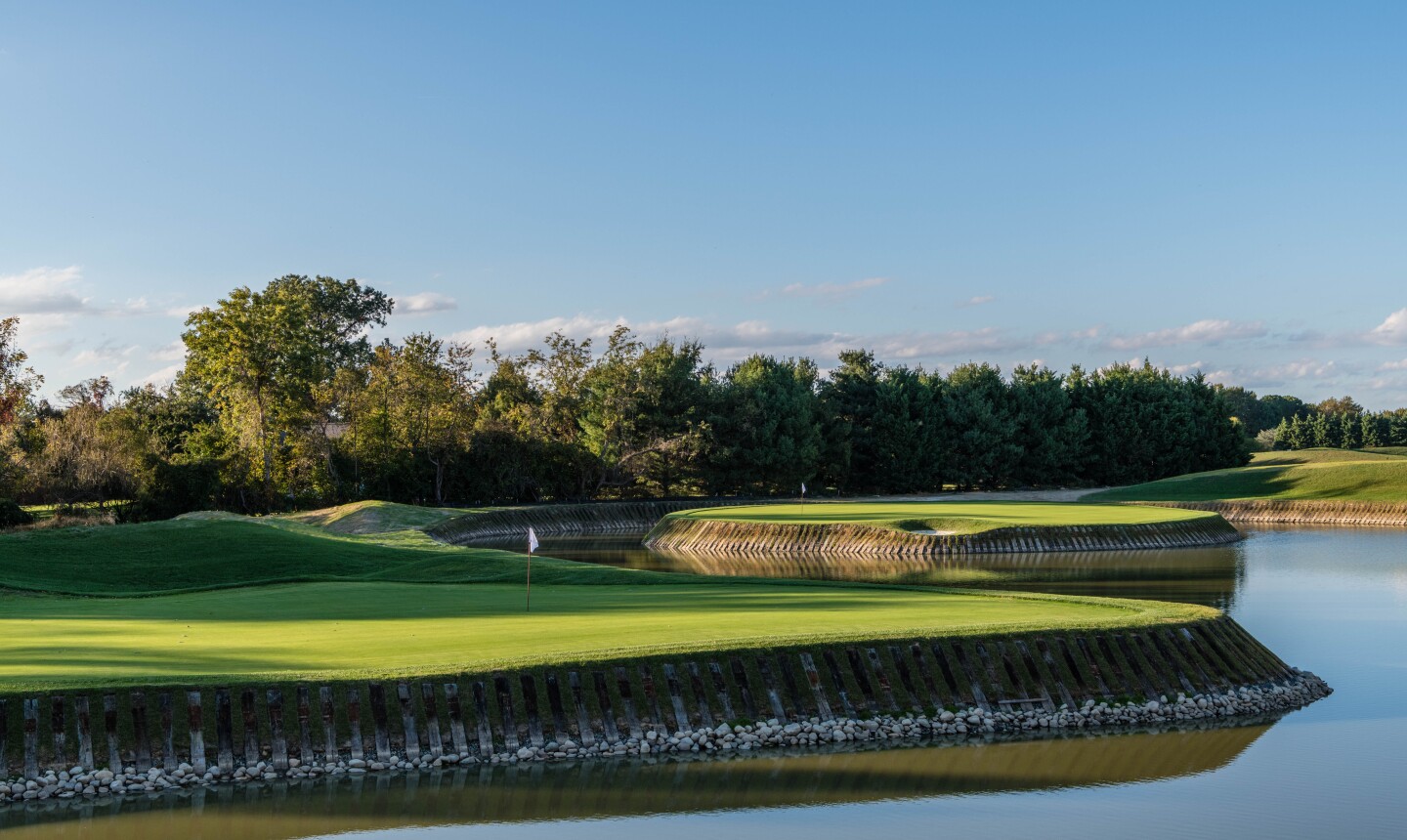 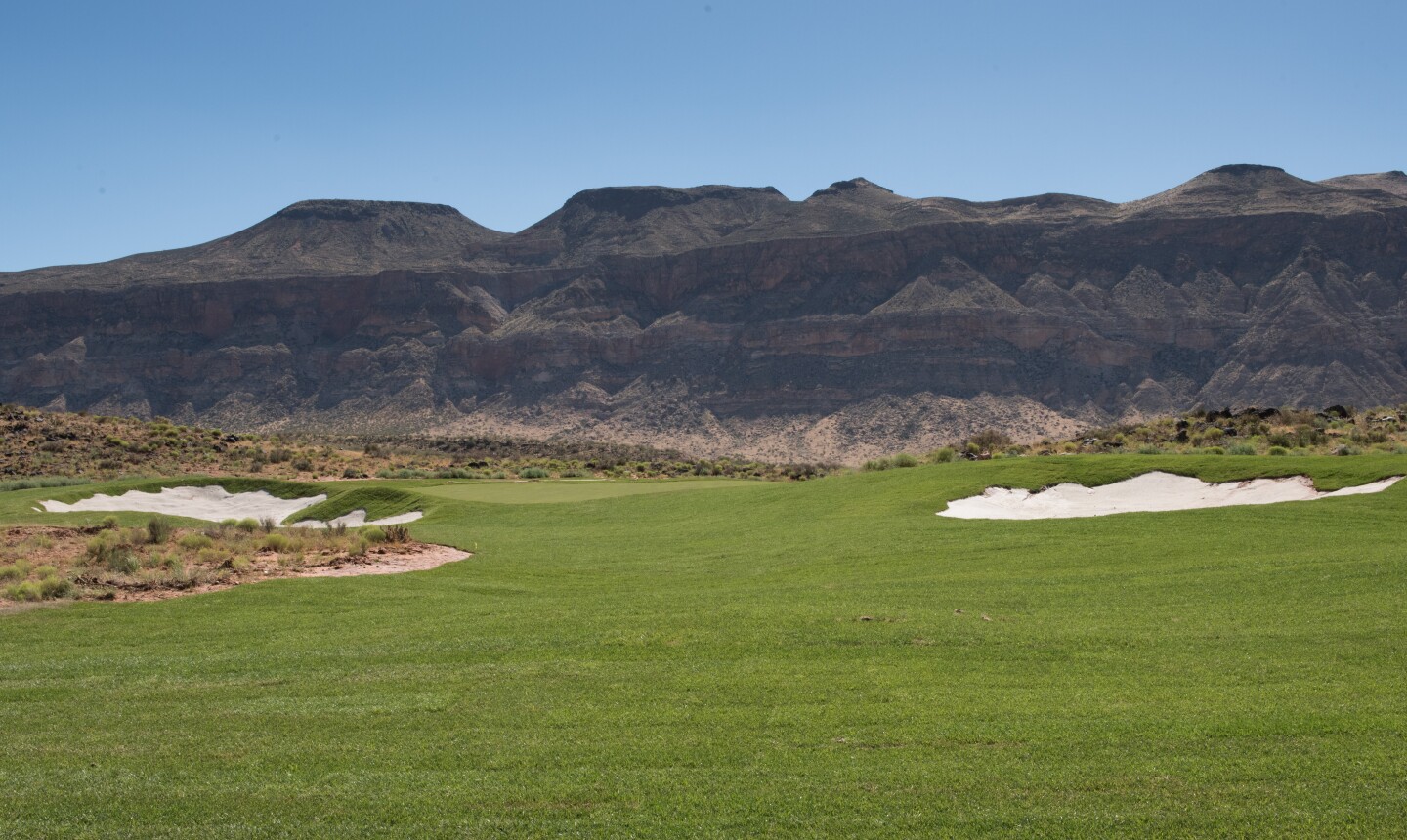 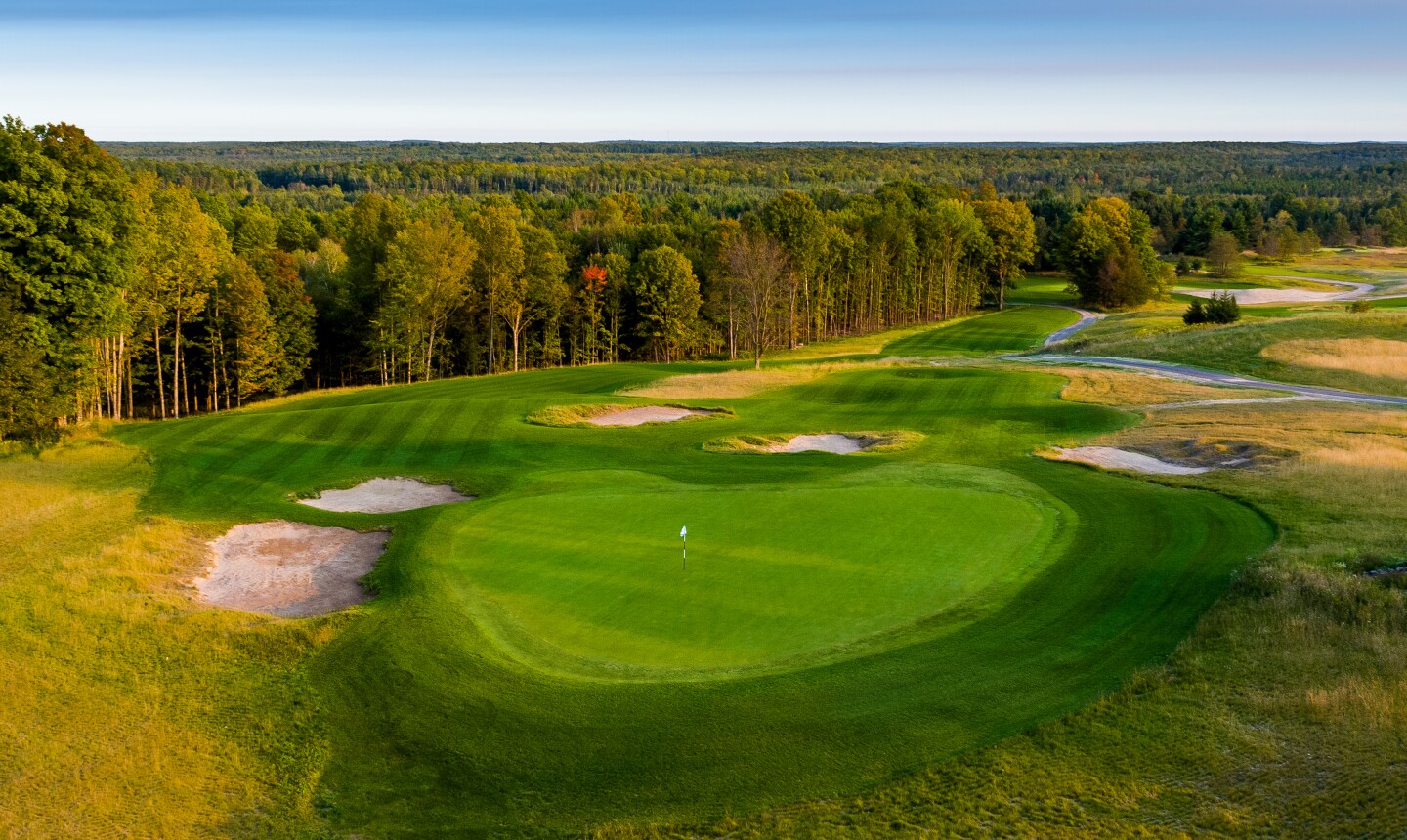 2018 is finally upon us (I can't believe it, either), and while we're a long way removed from the go-go golf course construction boom of the 1990s and early-oughts, a number of exciting courses are set to burst on the scene this year.

Here are 13 new layouts to consider as you plan your golf travel in 2018. (For our list of the most significant renovation projects in 2018, click here).

On the heels of the smashing success of the original Coore/Crenshaw course at Sand Valley, David McLay Kidd makes his return to Mike Keiser's stable of golf course architects for the first time since he crafted Bandon Dunes' original 18. Mammoth Dunes is a double-entendre: the glacier-formed dunes of central Wisconsin were home to woolly mammoths in prehistoric times, and the landforms (one in particular) dominating this new course are, themselves, mammoth in scale. So are the fairways, which in places are wider than the length of an entire football field. But as tends to be the case, it's much better to be on a certain side of those huge fairways if you want a reasonable approach to the green.

(Note: Mammoth Dunes won't be the only new course coming on board at Sand Valley in 2018. The 17-hole Sandbox, a short course built by Jimmy Craig of the Coore & Crenshaw stable, will be ready in the spring as well.)

Big Cedar Lodge proprietor (and also Bass Pro Shops founder and conservationist) Johnny Morris knows how to pique the golf world's attention. He's been quite coy when it comes to releasing details about the next course at his Branson-area resort. We do know it's a Bill Coore/Ben Crenshaw layout and it uses part of the footprint of the unsuccessful Murder Rock Golf Club. The only thing the resort is saying at this point is that a 2018 opening is expected. Whenever it debuts, I'm betting it'll be a sought-after addition to one of America's fastest-growing golf resorts.

Video: Ginella on the best courses opening in 2018

In the annals of golf course design, the latter half of the 2010s decade seems destined to be known as "the Gil Hanse years." The former Tom Doak apprentice is golf's current it-designer. His designs at Mossy Oak in Mississippi and Streamsong Black in Florida, along with the diminutive but irresistible "Cradle" short course at Pinehurst, have accelerated his cachet on the back of his well-received Olympic Golf Course in Rio, and he's also been lending insight to FOX's annual U.S. Open broadcasts. Pinehurst No. 4 has been a popular course at the mega-resort since Tom Fazio's 1999 renovation, but in an effort to continue to reinstitute a sandy, scrubby look, the resort has retained Hanse to bring the course back to its roots. Not only will the fairways be wider and the green bigger, but yawning sandy expanses will also replace the nagging tiny pot bunkers that Fazio fashioned. Enough holes will be fundamentally changed that I'm content to call this one a new golf course altogether.

The original Warren Henderson/Rick Smith design on Lake Michigan's eastern shore has been a popular destination for golfers since it opened in 1999. This summer, a course of a completely different sort will come to a plot of land 1.5 miles south of the original. Designers Dana Fry and Jason Straka took inspiration from Charles Blair Macdonald and Seth Raynor's famed Chicago Golf Club, which means the South Course will be characterized by flat-bottomed bunkers, undulating greens with squared-off edges and an open feel. Arcadia Bluff's new course will bring a Golden Age-type golf experience to an expanded audience of golfers, and I can't wait to see it.

Michigan's Upper Peninsula is home to a trio of golf courses that make for a great golf getaway rota. That trio becomes a quartet in June 2018 with the opening of Sage Run, a Paul Albanese design just a few miles from his Sweetgrass Golf Club, the first course built at Island Resort & Casino. Whereas Sweetgrass has a meadow setting, Sage Run is carved out of rolling forest, with a large ridge dominating the routing. It promises to make an excellent second on-site offering and will add to a course list that includes Greywalls in Marquette and TimberStone in Iron Mountain.

Pete Dye has so transformed the original eighteen on this piece of land on Maryland's Eastern Shore that it fits my definition of a new golf course. Dye's wife Alice says of the layout, “As you go along, it builds up and you see a little Pete Dye here and a few more Pete Dye elements there, and then you get to the 16th hole and the final three holes are so exciting.” That closing trio includes something of an oddity in the Dye canon: a replica hole, in this case of his (and Alice's) own 17th at TPC Sawgrass' Players Stadium Course. You may recognize the associated Inn at Perry Cabin resort from the Owen Wilson/Vince Vaughn comedy, "Wedding Crashers."

This Forrest Richardson design now managed by O.B. Sports completely replaces the previous Palo Alto city course with an all-new routing that features generous fairways, austere but strategic bunkering and some interesting green complexes, including a double green shared by holes 3 and 15, and two separate greens on hole 14. (Note: About an hour north in Alameda, the Jack Clark South Course at the Chuck Corica Golf Complex, which was supposed to open last year, should debut in the next few months.)

The extreme southwest corner of Utah is an underrated golf destination. Standout courses such as Sand Hollow and Coral Canyon attract golfers to this red rock area that is less than two hours northeast of Las Vegas. Copper Rock is being designed and built by Dale Beddo, an experienced golf course developer in the Southwest. Copper Rock looks to focus on fun, with wide corridors, long-range views and back tees measuring only 6,800 yards.

Technically you could call this a massive renovation, but in my opinion, the changes to this golf facility are so fundamental that it can safely be called a new golf course. Bobby Jones will be going from a long-in-the-tooth, intimate 18-holer to a spiffy, reversible 9-holer plus a short course and a handsome new practice facility. The project represents the final design of late golf architect Bob Cupp, whose son will be involved in carrying out his father's vision.

Doug Carrick, one of Canada's foremost golf course architects, will be debuting a new course about an hour north of Toronto in 2018. Set on the shores of Lake Simcoe, Friday Harbour, which will also include a real estate component, is being touted as a four-season resort.

The latest new golf course opening in Colorado will be a private Art Schaupeter design between Denver and Fort Collins. Private TPC courses can usually be accessed through courtesy calls from one's home club pro or certain credit card loyalty programs, so if either of these options apply to you, this future Web.com host site may be playable after it opens in the summer. With a 773-yard par five and a number of sod-walled pot bunkers, it should have plenty of eye candy.

This course sits on the site of the former Southern Hills Country Club, but architect Jeff Brauer's finished product will bear no resemblance to its predecessor. This private, family-oriented facility is located about two hours east of Dallas. (Note: Also in Texas, Kissing Tree in San Marcos, which we detailed in last year's piece on new courses, is now scheduled to open in the spring of 2018.)

You will likely need some serious connections to play this Gil Hanse design west of Savannah deep in the Peach State's sandy midsection. The word (there hasn't been much of it) on this facility is that it will have a small, exclusive membership who, in keeping with the club's name, will eschew stroke play entirely. If you should happen to know someone who can get you on, take advantage of your good fortune.

Heard about any other brand-new golf courses opening in 2018? Let us and your fellow golfers know about them in the comments!

hi,, i'm really exited to give you information,, if you want to learn like a pro i give you this the most valuable trick.
just visit my recomended link: you will never dissapointed just visit this link : https://tinyurl.com/y7uf5j43

The match play course is an interesting idea but players will still have to keep stroke play scores for handicap purposes.

I was excited when I read something about the new golf course in "Rome"... then I realized that you were talking about the US and the feeling disappear. As I'm interested in Europe courses, I got to share with you what I found about Barcelona http://smartgolfbarcelona.com/ that destination for me is kind of new. What about talking about Catalunya.