June 16th should be circled on every golfer's calendar.

It is the birthday of Old Tom Morris, the Scot credited with transforming the Old Course at St. Andrews into what it is today and a four-time champion of The Open in the 1860s. It wouldn't be hyperbole to wonder where golf would be without Old Tom's influence. 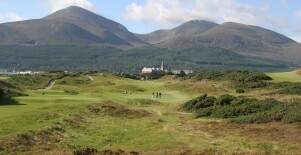 June 16, 2021, is especially significant as the legend's 200th birthday. Prestwick St. Nicholas, one of the many Scottish courses with ties to Morris, will celebrate the anniversary with a stroke-play competition on June 20 over a 12-hole layout with hickory shafted clubs and gutta percha balls, replicas of Old Tom's tools of the trade. Since players will be following the old rules, and won't be able to lift and clean their balls, stymies will be in play!

Morris was a founding member of Prestwick St. Nicholas, originally called Prestwick Mechanics, in November 1851. At that time Morris was the “keeper of the green” at Prestwick Golf Club. For a time, the clubs shared the same 12-hole track. He was a member of St. Nicholas when he won the Open in 1861 and 1862 and was an honorary member when he took the title in 1864 and 1867.

“Old Tom was responsible for remodeling or designing around 100 golf courses, but we believe this is the only one he founded," notes Neil Foggo, the current St. Nicholas club captain. "The celebration of Tom’s 200th birthday seems an appropriate time to remind our members, and the global golfing community, of the incredible debt we owe him.”

Editor's Note: Jason Scott Deegan is pinch-hitting for Tim Gavrich, the master of "Cool Golf Things" who is out celebrating the birth of his first child.