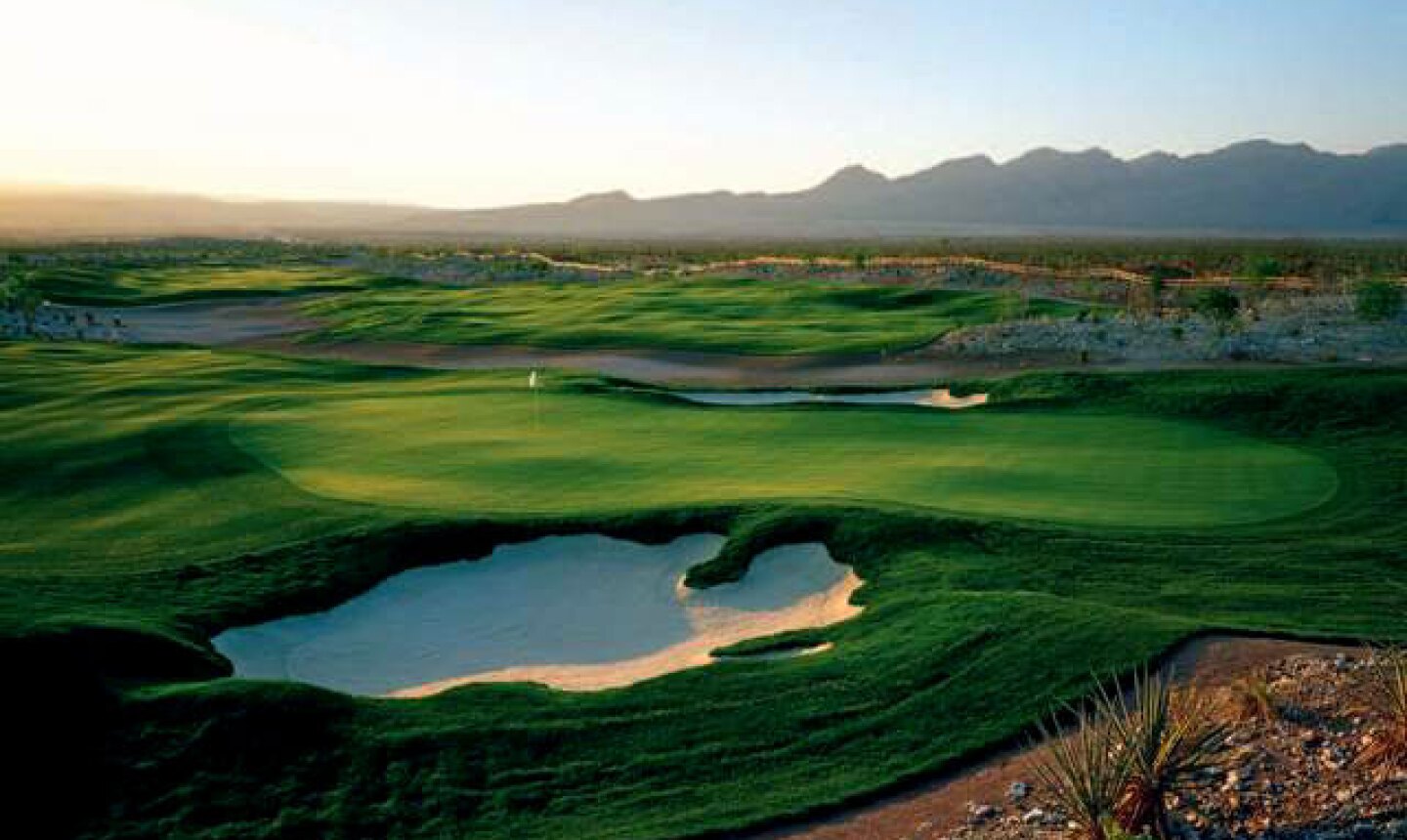 The greens at Coyote Springs Golf Club are large and undulating. Henebry Photography/Courtesy of coyotesprings.com 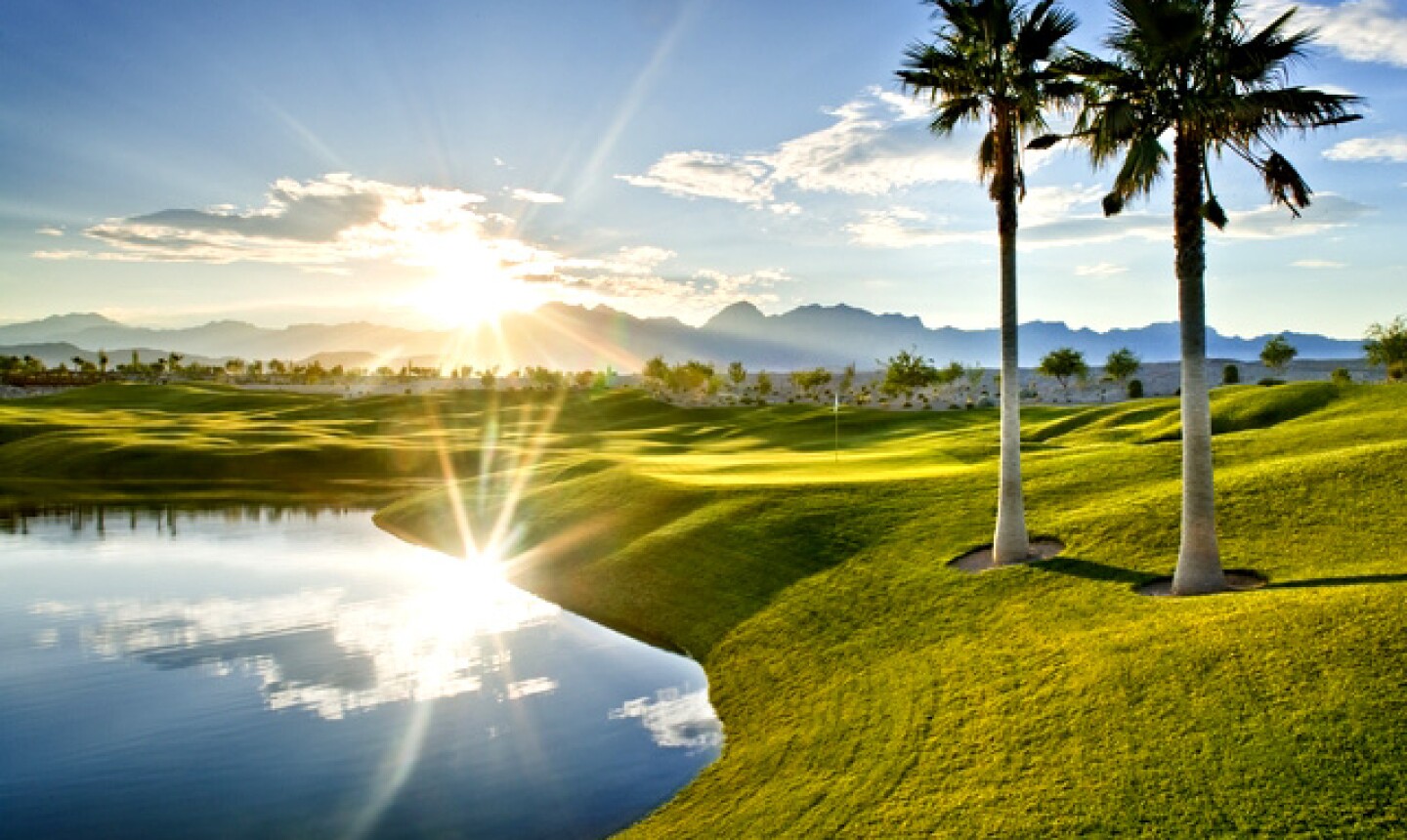 Water comes into play on 11 of 18 holes at Coyote Springs Golf Club. Jeff Dow/Courtesy of coyotesprings.com 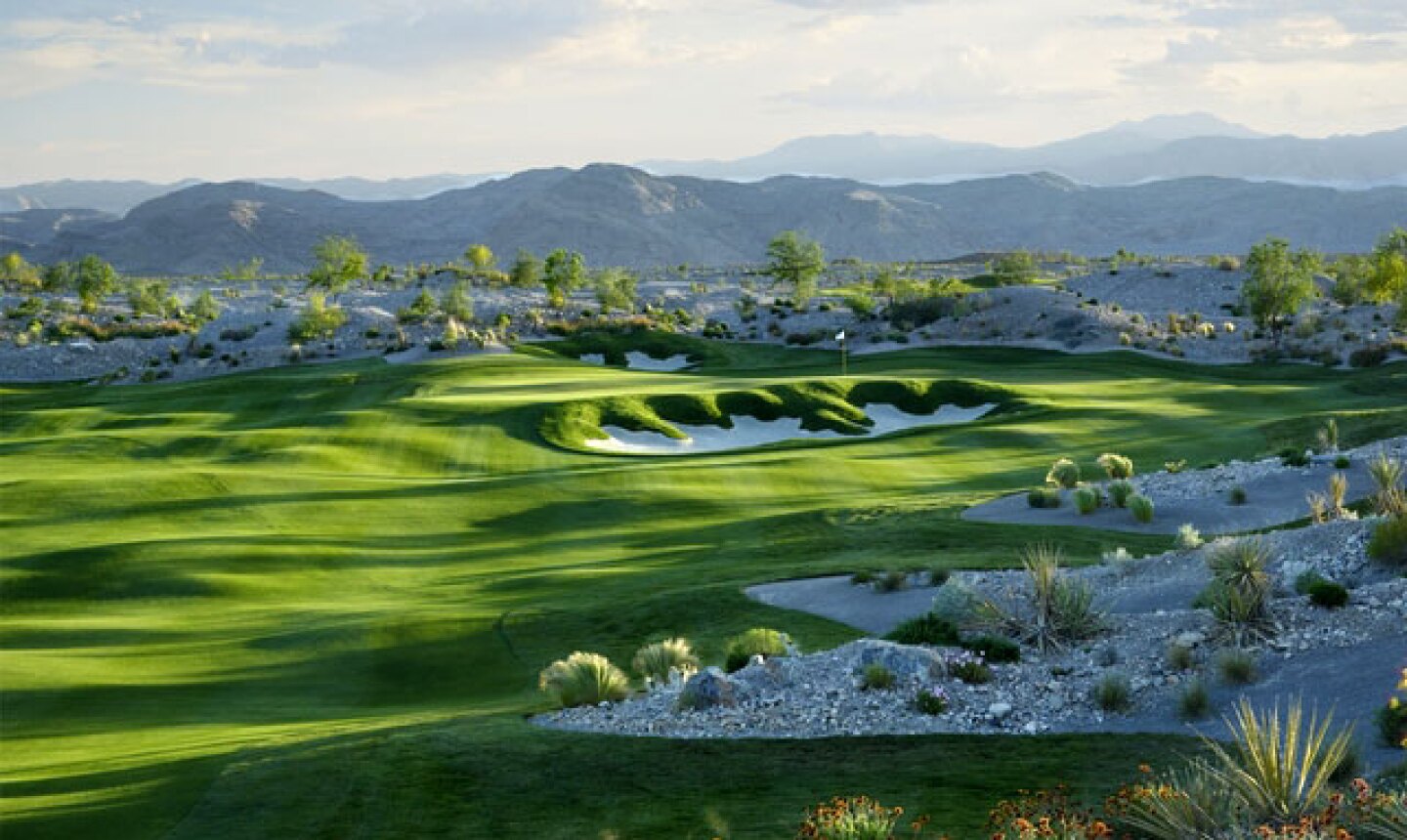 Golfers at Coyote Springs Golf Club face forced carries and elevation changes. If there's a breeze, the challenges get a little tougher. Lonna Tucker/Courtesy of coyotesprings.com

COYOTE SPRINGS, Nev. -- Jack Nicklaus has designed more than 350 golf courses in more than 30 countries. But one of his recent beauties, Coyote Springs Golf Club, which opened in 2008, will thrill and amaze golfers -- and that's before you ever swing a club.

Coyote Springs Golf Club, one of nine golf courses in the Golf Mesquite Nevada group, is one of those hidden gems that people start talking about with a murmur and end up shouting the virtues from the rooftops. It's that good. And what makes it that good is Nicklaus didn't cut one corner when it came time to unveil the finished product.

On the golf course, it's 18 holes of Nicklaus at his best. Holes that dogleg left and right (and sometimes both ways on the same hole), and a layout that will challenge players of all abilities. The par-72 design stretches out to 7,471 yards from the tips, so big hitters can let it rip. From the front it's a manageable 5,349 yards, so all golfers can give it their best shot.

So grab your clubs and head an hour north of Las Vegas to tackle one of Nicklaus' best golf courses.

"To have a Jack Nicklaus-signature course on the property is a great selling point in itself," said Todd Michaelsen, head golf professional at Coyote Springs Golf Club. "But to have a course that's this special, it's pretty amazing."

The layout rolls beautifully through desert surroundings like it was dropped from the sky. And we do mean roll. There are very few level lies anywhere on this golf course, and the fairways are as undulating as the large greens. With water coming into play on 11 of the 18 holes, players are treated to challenging golf shots and stunning views.

Nicklaus gives players a nice chance to score well to open the round. A par-4 first hole that reaches just 374 yards, the fairway is wide and accommodating and sets players up for a short iron in. That's where the real challenge starts.

"You can see where you're going from every tee," Michaelsen said. "It's all right there in front of you. The fairways are wide, but the meat of the golf course are the approach shots and the greens. You really have to have a good touch around and on the greens to score well."

The second hole is a prime example. Named Deuces Wild, this par 5 stretches out to 518 yards and is reachable for the big hitters -- if you're willing to gamble. Thirteen bunkers, a huge pond, desert waste areas and a large, undulating green will force players to think about the pros and cons of every shot on this hole. It's a great test of golf, and there's much more challenge and beauty ahead.

Golfers will face forced carries and elevation changes during the round, and if there's a breeze, the challenges get a little tougher.

Two of the more impressive holes players will tackle are the side-by-side ninth and 18th holes. The ninth, a par 4, is a dogleg left at 410 yards with a pond on the left. The 18th hole, also a par 4, is just the opposite, a dogleg right of 375 yards with that same pond on the right. Both are great scoring chances to end your front nine or your round. But like the rest of the golf course, think carefully before you pull a club -- even on the tee, as driver isn't always the right choice.

"All of the holes are visually impressive," Michaelsen said. "Once people play here, they say, 'We'll be back. Now that I know the course, I want to play it again.' It's those kinds of comments that let us know we have a great golf course."

Before stepping up to Coyote Springs Golf Club's first tee, make sure to hit the range. And this is no ordinary range. Covering more than 20 acres, this amazing practice facility features 13 target greens to work on every shot imaginable. There's a short-game green, chipping and bunker practice areas and the putting green stretches out to about 10,000 square feet with room to work on uphill, downhill, side hill, long and short putts. If you'll come across it on the golf course, you can replicate it here.

If you've never played the course before, here's a tip -- use a caddie. Some people say caddies aren't needed. But at Coyote Springs Golf Club, you'll be glad you have one by your side.

"Especially for the first time, the caddie is worth about four to five strokes just by having that second set of eyes with you," Michaelsen said. "Most of the caddies have been here since day one and know the course better than anyone. They will point you in the right direction and give you the information you need."

Michaelsen added, with a laugh, "You just need to be able to hit the shot."

If you're a fan of Nicklaus-designed golf courses -- or even if you're not -- you're going to enjoy every facet of Coyote Springs Golf Club. It's a world-class effort from a world-class designer.

Bill Bowman
Bill Bowman is a Las Vegas-based writer who has more than 40 years in the sports-writing business. He's spent the past 16-plus years covering the golf scene in Vegas and has teed it up for magazine profiles with celebrities including comedian Bill Engvall, actor Jeffrey Donovan (USA's Burn Notice), ESPN personality Colin Cowherd, NASCAR's Kurt Busch, Collective Soul's Ed Roland, the Baltimore Ravens' Jonathan Ogden and many others.
0 Comments 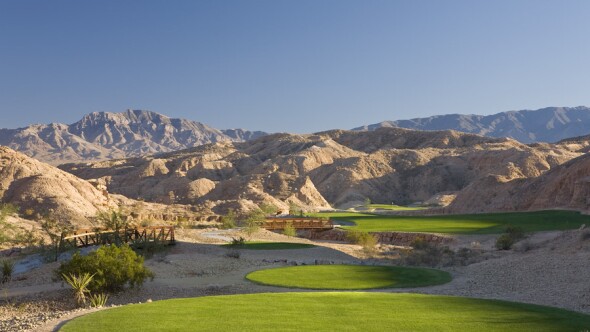 Articles
Conestoga Golf Club in Mesquite, Nev.: The wild, wild West's newest masterpiece
Conestoga Golf Club in Mesquite, Nevada opened in January 2010, but one trip around the golf course and you'll feel like you've known it for years. In fact, all it takes is one look at this Gary Panks design and you'll know you're in for a challenging and rewarding round of golf, Bill Bowman writes.
4 Min Read 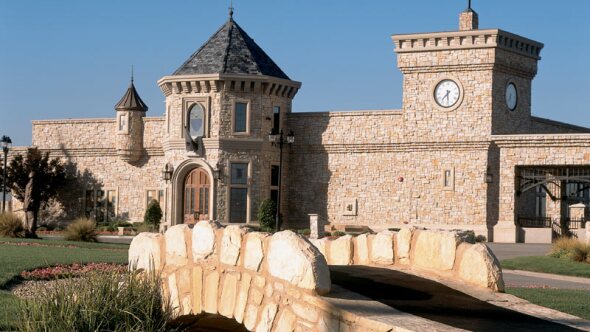 Articles
2 Min Read
Royal Links: Your chance to play British Open golf holes in Vegas
A round at Royal Links Golf Club in Las Vegas lets you take on replicas of 18 historic holes that have been used in the British Open rotation. From the clubhouse-turned-castle to the monuments paying homage to the game, you'll find yourself feeling a world away while only miles from the Strip. 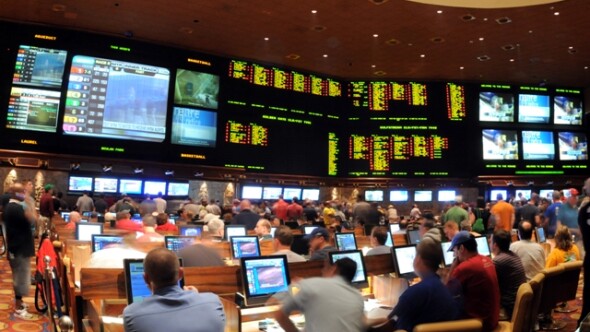 Articles
2 Min Read
NCAA basketball and Las Vegas golf: It doesn't get any better than March Madness in Sin City
Golf and Las Vegas go hand-in-hand. Add in March Madness and you've got the makings of a great outing. Whether it's for just one weekend of the event or the entire two weeks, you'll have plenty of time to check out the golf courses and hoops excitement. Just make sure you start making those tee times early because, like the NCAA basketball tournament, you've got to be in the field to be part of the excitement. 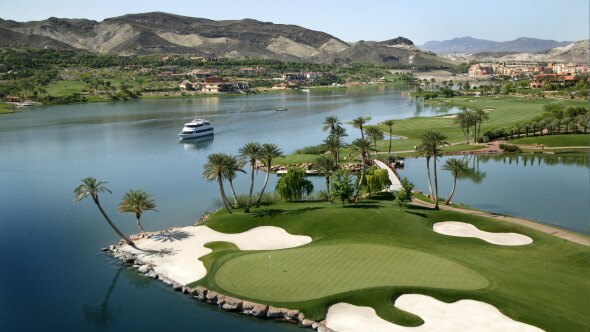 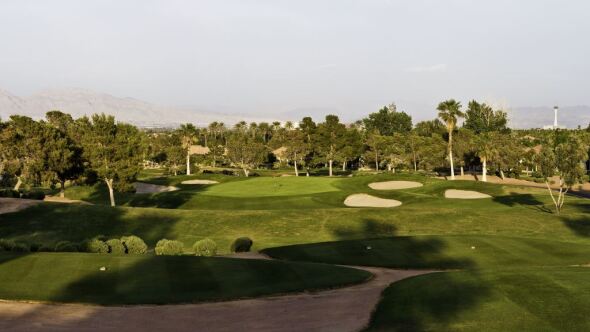 Articles
3 Min Read
Golf Summerlin's Palm Valley Course: Add variety and value to your Las Vegas golf
Variety, value and views. It's that simple when you're talking about the Palm Valley Course at Golf Summerlin. This Billy Casper/Greg Nash-designed layout is the original Golf Summerlin course, opening in 1989. It's also the longest of the three, and the design -- with a variety of challenges in the length of the holes -- makes tremendous use of the land. If you're looking for a solid round at affordable prices with nice Las Vegas views, you've come to the right place, Bill Bowman writes. 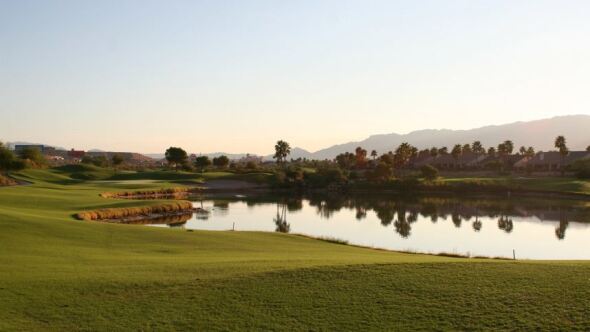 Articles
3 Min Read
Mesquite golf 101: Seven must-play courses
Mesquite, Nevada boasts seven top-flight courses that offer enough variety and challenge that you can play a different one every day and not feel like you're playing the same hole day after day. With that in mind, here's Mesquite Golf 101: Your guide to teeing it up. 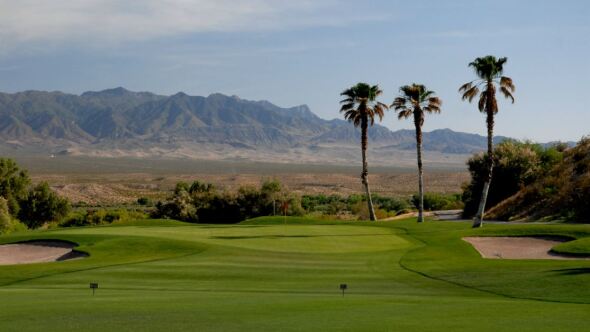 Articles
3 Min Read
Palms Golf Club near Mesquite, Nev.: Play a resort course and a desert course in one 18-hole layout
The front nine at The Palms Golf Club near Mesquite, Nevada is a rolling, resort-style course with palm-lined fairways, numerous ponds and a plethora of bunkers to test golfers' accuracy. On the back nine, however, prepare for desert golf at its finest. The variety of holes, the challenges and the views make The Palms a course that will appeal to everyone in your group, Bill Bowman writes.