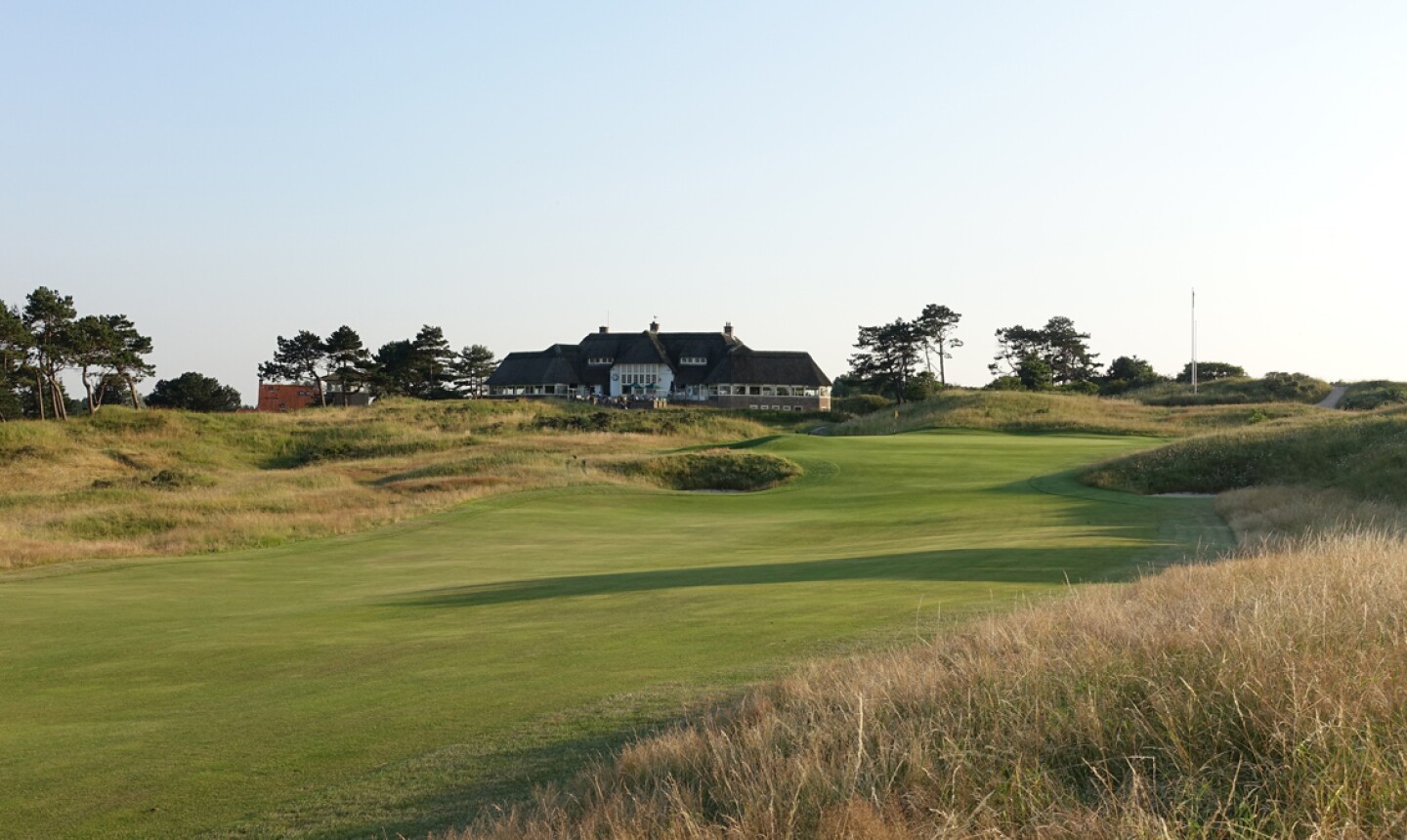 Kennemer is one of a few links courses found in an unexpected place: the Netherlands. (Kennemer Golf & Country Club)

Having been obsessed with golf since my father first put a club in my hands at the age of six, I have probably read as many descriptions of golf courses as any living 28-year-old.

And over the years of seeing blurbs in magazines and ads about all sorts of facilities, I've noticed that there's one word that tons of courses - all courses whose fairways aren't tree-lined, more or less - use to describe themselves.

Perhaps I'm over-sensitive, but it's become a pet peeve of mine, because in 99% of these cases, it's misapplied.

A lot of courses and marketing companies have used the concept to signify a premium, "authentic" golf experience, even when the reality is quite different from actual links golf.

In the end, "links" is another type of golf course - no more, no less. It's descriptive, yes, but it's not necessarily an indicator of higher quality in and of itself (though many golfers do favor the virtues and characteristics of links golf).

However the term has been used in decades of golf course marketing, "links" describes a very specific sort of terrain and soil for golf, and even though thousands of American courses fancy themselves "links golf courses," they are not links golf courses.

Official definitions vary to some extent, but golf course architecture experts and golf historians seem to agree that for a golf course to be truly considered a links golf course, it needs to satisfy these main criteria:

Other defining characteristics of links golf courses include the following:

According to authors Malcolm Campbell and George Peper in their book True Links, there are only 246 courses in the entire world that qualify as links golf courses.

Given that golf sprang up in the British Isles on linksland (i.e. areas that "link" the coast with the mainland) considered unfit for farming, the vast majority of the world's links golf courses are located there, and particularly in Scotland.

But not all of them. There are a handful of courses elsewhere around the world that Campbell and Peper consider links golf courses.

There's Kennemer Golf & Country Club, one of a handful of courses in the Netherlands that are widely considered links...

And Denmark has a links: Fanø Golf Links.

There are a few true links courses in Australia, too - especially in Tasmania, where both Barnbougle Dunes and Barnbougle Lost Farm attract golfing pilgrims from thousands of miles away...

In New Zealand, the venerable Paraparaumu Beach Golf Club is a beloved links...

And there's even a links course in Africa: South Africa's Humewood Golf Club...

Links golf in the U.S.

In America, where the game is centuries younger, golf course developers have long traded on the romantic notion of "links golf" to market their own courses, even when those courses had key differences with their true-links forbears.

Perhaps the most notable example is Pebble Beach Golf Links, whose stretches of cliffhanging holes above the Pacific Ocean have won it acclaim as one of the world's most famous courses.

But Pebble Beach is, strictly speaking, not a links, because its soil isn't particularly sandy and many of its holes - the first three and the 12th through the 16th - occupy coastal forest land.

But should Pebble Beach's not-quite-links identity take anything away from its prestige? Absolutely not - Pebble Beach is one of the world's great golf courses, period.

Nevertheless, calling Pebble Beach a "links golf course" does not quite encapsulate its unique identity.

Bandon Trails, though...not as much, because much of the routing heads through coastal forest.

But does that matter? Links or not, Bandon Trails is also a great course. In fact, some people consider it their favorite course on property.

There are numerous other courses that might be mistaken for links golf courses, but are really something else, and something awesome.

Yes...I know it even has "Links" in its name. But despite its open, mostly treeless property and awesome ground features courtesy of architects William Langford and Theodore Moreau, it's not an actual links golf course, because the sea is hundreds of miles away.

The same goes for the great courses of the rolling hills through America's Great Plains. Sand Hills, Dismal River, Prairie Club, Wild Horse, Bayside...all these courses are inspired by the great links of the world, and they play firm and fast, but they're not, strictly speaking, links, because like Lawsonia, they're far from the coasts.

But that shouldn't stop you from seeking to play them.

Of course, the presence of an ocean does not a links golf course make, either.

For example Kiawah Island Resort's Ocean Course has as much ocean frontage as any course in the world. But it's not a links, because its turf is Paspalum grass, rather than the hardy fescues and bent grasses that prevail at other links.

And at the risk of sounding like a broken record, this is no big deal. The Ocean Course is a definite bucket-list course, and whether or not it qualifies as a links has no bearing on that fact.

I know...this may seem like much ado about nothing. But if you went to a restaurant that bills itself as Italian, only to find the menu was all sushi, you'd feel deceived, wouldn't you?

So it is with links golf. If you book a round on a mislabeled "links golf course," especially in a warm-weather golf destination (where these not-quite-accurate descriptions are most prevalent) and find shots your tee shots and approaches plugging in mushy fairways and greens, you're probably going to feel a bit misled.

Bottom line: with all sorts of misinformation causing confusion and frustration everywhere these days, we should strive to describe our great golf courses as accurately as possible.

Greater accuracy in describing courses will facilitate one of the greatest things about the golf community: its camaraderie, especially in the sharing and comparing of golf courses and experiences over a drink in the 19th hole.

What do you think of the concept of links golf, and the way it's marketed? Please share your thoughts in the comments below!

I think Tim is correct, the descriptive adjective “Links” is over used today. However, we “did” have a links in the USA for when CB MacDonald built, The National Golf Links of America it was a links with minimal irrigation & fescue fairways and greens. Today it has irrigated lawns of rye and poa and bent grass greens. But in today’s world where, the game is played “in the air” and “green” Greens are expected, it’s not bad and still fun.

There are a number of hidden gems all along the Normandy coast in France, number one among them is in Granville www[ dot] golfdegranville [dot] com/links-of-granville-1912/

Bob--
I think Arcadia Bluffs might fall into similar territory as Whistling Straits, where the manufactured nature of the course probably keeps it from being a links in the same sense as the more natural ones in GB&I and Bandon Dunes and the like. Also, links purists would probably quibble over it being situated on a lake, rather than a sea or ocean. But again, I wouldn't let the designation take away from the merits of the course. It's a fun debate to have.
--Tim

I have played a links style course near Orangeville Ontario. It is a links course in every respect including frequent fog other than the fact that it is over 1500 miles from the Atlantic coast and is not old. It has bent grass, fescue, pot bunkers, is generally firm allowing the ball to be run up to many of the greens. I have also played Hunter's Point in Welland Ontario. It also satisfies most of the links criteria. Sadly, it has gone into receivership and is not likely to survive much longer.

I would like to remind all that Ireland has some of the greatest links courses in the world! Just to name the most famous: Ballybunion, Lahinch, Tralee, Waterville, Royal Portrush, The European at Brittas Bay, Ballyliffin and so on... you also asked about Shinnecock in a comment-the neighbouring golf course „Golf links of America“ is a true links course where many famous links golf holes of the British isles have been rebuilt and put into a fascinating variety of unique architectural golf holes! The only problem: it is private and you need an invite!

A list over the 246 true links courses of the world, as defined by The Links Association, is published at MigrantGolfer.com

I have played several true links courses in Scotland and consider Arcadia Bluffs on the shores of Lake Michigan to be a links course by your definition. It has sandy soil, fescue grass and sits on "coastal" land - a large lake rather than an ocean. Do you agree?

Grew up near Humewood GC where my Dad was a member for most of his life. He was a 7 handicap at 72 years old!

Wind is an integral challenge. Don't know how even the good players score well there. He had developed a way of hitting his irons that caused them to start very low and build up into the wind dropping down softly. There was a 130-140 yard par 3 there that when playing into the teeth of one of the two prevailing winds where even low handicappers needed a 3 wood or driver sometimes.

I was always under the impression that besides the Sandy soil and coastal prerequisites, there is the out on 1 and back to the clubhouse on 18 thereby "linking" the holes like a chain and thus the "links" connotation.

Highland Links on Cape Cod Massachusetts claims it is the oldest links course in America, I played it a couple of weeks ago and I would say it qualifies.

Kira K. Dixon
Lifestyle Correspondent
Now Reading
Debunking the links golf myth
New Cookie Policy
WE AND OUR PARTNERS USE COOKIES ON THIS SITE TO IMPROVE OUR SERVICE, PERFORM ANALYTICS, PERSONALIZE ADVERTISING, MEASURE ADVERTISING PERFORMANCE, AND REMEMBER WEBSITE PREFERENCES. BY USING THE SITE, YOU CONSENT TO THESE COOKIES. FOR MORE INFORMATION ON COOKIES INCLUDING HOW TO MANAGE YOUR CONSENT VISIT OUR COOKIE POLICY.
CONTINUE
Search Near Me