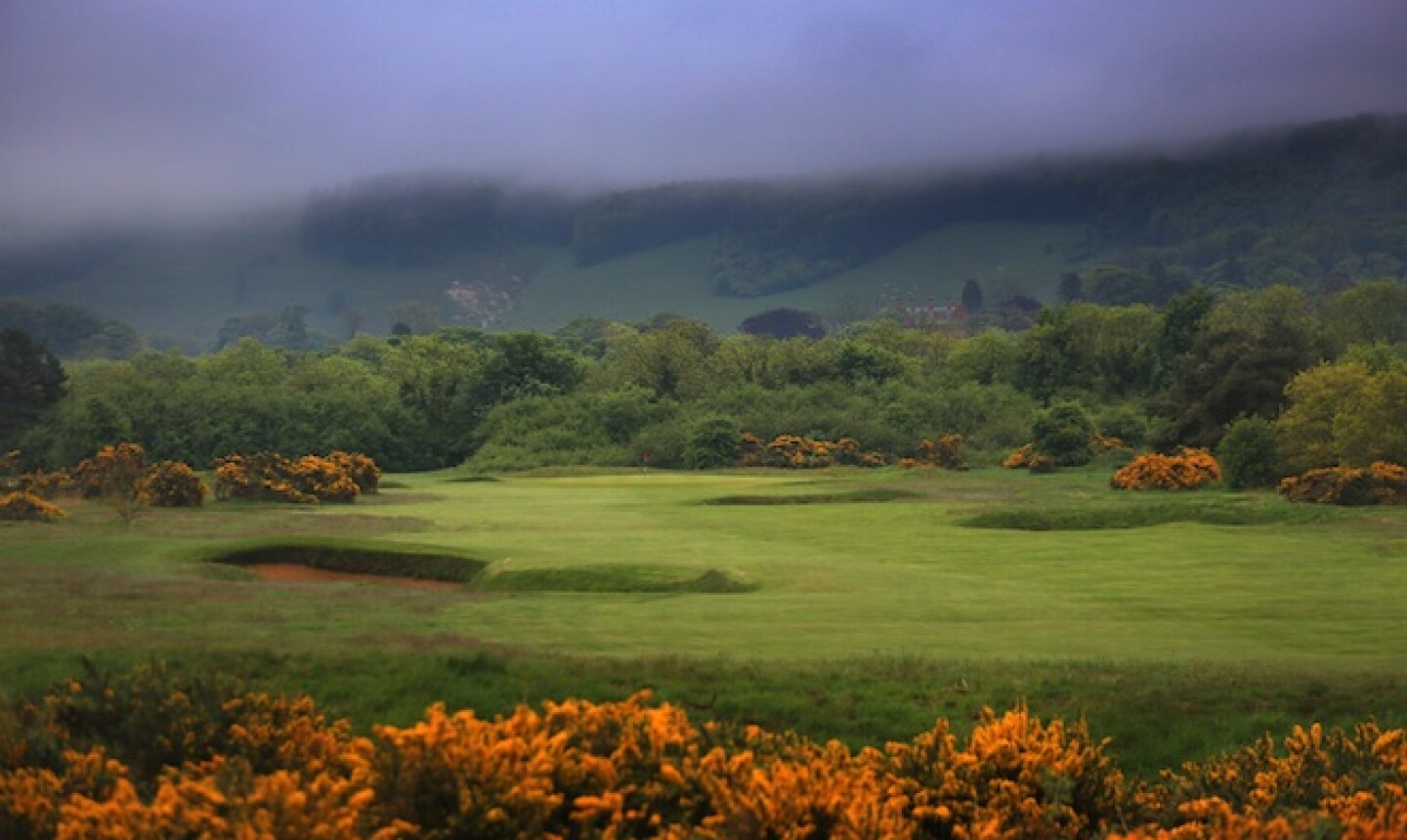 Ganton is somewhat off the beaten path for most golfers traveling to the UK, but those who seek it our are rewarded with a fantastic experience. (Ganton Golf Club)

You seemed to have a strong reaction to our piece from last week on England's great heathlands golf courses, and why you might enjoy playing them even more than the more famous links.

So knowing that you still might be mulling over your golf plans for the British Isles for next year and beyond, we wanted to complicate things even further by saying that...

In addition to the British Isles' stunning links and England's arresting heathland gems, there are a bunch of inland - or "parkland," if you will - courses that may also be worth visiting while you're abroad.

(You may recall we touched on a couple of these courses briefly a few months ago when talking about "stereotype-breaking" golf courses.)

Though to be fair, even the best of these courses probably won't stack up to the upper echelons of links or heathland layouts, you will still enjoy these courses, especially if you're open to the non-seaside charms of England, Scotland and Ireland (and you should be).

The most opportune time to play one of England's top inland courses is most likely on your way from London to one of the coasts (including Scotland, to the north, if you prefer taking in the countryside instead of flying into Glasgow or Edinburgh).

The Keith Phillips-designed site of this year's British Masters, The Grove, sits at #19 on Golfweek's list of the best modern (post-1960) courses in the British Isles and is located just north and west of London, in Watford. As with many of its peer courses, it sits at the center of a resort converted from an old country estate. And for Tiger Woods fans, it's the site of one of his many runaway victories: an eight-shot margin at the 2006 WGC-American Express Championship.

Even closer in to London, just a few miles northwest of Heathrow, is Stoke Park Country Club Spa & Hotel. It is a boutique (49 rooms) hotel that dates to 1908, with an excellent and 27-hole golf course designed by Harry Colt, who was responsible for the likes of St. George's Hill, Swinley Forest, to name two courses from our heathlands exploration, among a host of others. Movie buffs might recognize Stoke Park from the golf scene in the great early James Bond film, "Goldfinger." (Note: the course is in the midst of a three-year renovation plan that is focusing on one of its nines per year. The Alison Nine will be getting its facelift starting this month.)

Farther north, two other great courses deserve a look: Woodhall Spa Golf Club and Ganton Golf Club. Both these courses come close to being classified as "heathland" coursesfor their classic ruggedness, but seeing as they're located hours north of Surrey, we will place them as two of the best British inland courses instead. Woodhall Spa is home to two courses (the older Hotchkin Course is the one to play) as well as some of the nastiest bunkers you will find on a non-links. The same is true of Ganton, which hosted the Ryder Cup back in 1949 and is still a tough track today.

Yes, people go to Scotland to play the links courses, and that will always be the case. But if you happen to get an invite to ultra-private Loch Lomond Golf Club, you'd be hard-pressed to pass it up.

There's also the Colin Montgomerie-designed Rowallan Castle, another gem on a glorious estate. This one is just a few miles inland from Montgomerie's hometown of Troon, which puts it in the orbit of great links like Royal Troon, Western Gailes and Prestwick. The turf won't be as bouncy and the course is more modern, but its high rating makes it worth a look if you're looking for something of a counterpoint to the area's great links.

The Emerald Isle is home to some spellbinding golf courses, and not all of them are true links, either. Carton House, whose Colin Montgomerie design gets high marks for its peaceful layout on the 1,100-acre grounds of an estate that dates back to the 18th century (the Mark O'Meara Course is a strong second-fiddle). If you're flying into Dublin to embark on an Irish golf trip, Carton House is a perfect first stop, at only a half hour from the airport.

You've probably read our piece on the Ryder Cup's "dirty little secret" with respect to the golf courses in the British Isles that have hosted it, but it's worth mentioning here that all of these venues - The Belfry in England, The K Club in Ireland, Celtic Manor in Wales and Gleneagles in Scotland - are all of this sort as well.

Neither links nor heathland, they tend to be likened to "American-style" courses, sometimes in a slight pejorative way. But it doesn't keep them from being solid courses in their own right, so if you want to soak up some Ryder Cup history on your inland golf travels, they're right up your alley.

(Note: If you go to Gleneagles, you must play the King's and Queen's courses. Play the PGA Centenary Course, too, if you like, but the "secondary" layouts are the real stars, in our opinion.)

At the risk of stating the obvious, the field of golf courses in the British Isles is ridiculously deep, because there are so many great layouts beyond the much-publicized links.

Do you have a favorite - perhaps one we didn't mention? Share your recommendations with us and your fellow Golf Vacation Insider subscribers below!

Try these two fine courses in Norfolk in the Breckland area. Swaffham Golf Club and Thetford Golf Club are both heathland courses built on sandy free draining soil and playable in virtually all conditions. You will not be disappointed with either.

Always interested in the Golf Vacation Insider, Ireland is an amazing golf location with plenty of brilliant challenging courses however it is not a British Isle.

Hadley Wood just north of London is an early Alister Mackenzie course and worth playing. And I am surprised you have not mentioned Royal Worlington &amp; Newmarket in the Cambridge area which is only 9 holes but superb. It sits on the old sea bed so is very linksy.

Made a trip to Yorkshire in May and really enjoyed both Ganton and Alwoodley. Other good ones in that region include Moortown, Sand Moor, Headingly, and Moor Allerton. All were reasonably priced, well maintained, and provided an interesting blend of holes. Moortown was the site of the first Ryder Cup in the UK, and an early MacKenzie design.

Ireland is an Irish Isle not a British Isle...!

Interesting to see this article. You can play a variety of heathland courses in my area in the Midlands West is Birmingham area East is Nottingham area. They are well established some over 100 years old, normally on sandy fast running terrain, with fescue grasses at a price considerably less than you would pay for a more famous links by the sea side. My course Northamptonshire County is Colt course rated in the top 100 and £65 for the day! Yes for the day as many as you can play. Nearby is Luffenham Heath another similar set up, this along with Tadmarton Heath make for a great trip. This type of thing is replicated all over the country. No resort mentality here just good old fashioned traditional members but open clubs. Highly recommended next time you are in the UK.

Just an hour to the east of London are 4 top quality inland/heathland courses at Ipswich, Woodbridge, Aldeburgh (2 balls only) and Thorpeness.
Add to that the 4th oldest course in England by the sea at Felixstowe Ferry and you'll be playing some less well known wonders.

Adare Manor just a short drive from Shannon in the charming village of Adare, is a fantastic parklands course. The inn is also first rate

Check out Alwoodley, North of Leeds. It's regarded by many as Yorkshire's top course and not much more than an hour from Ganton if you're in the area.