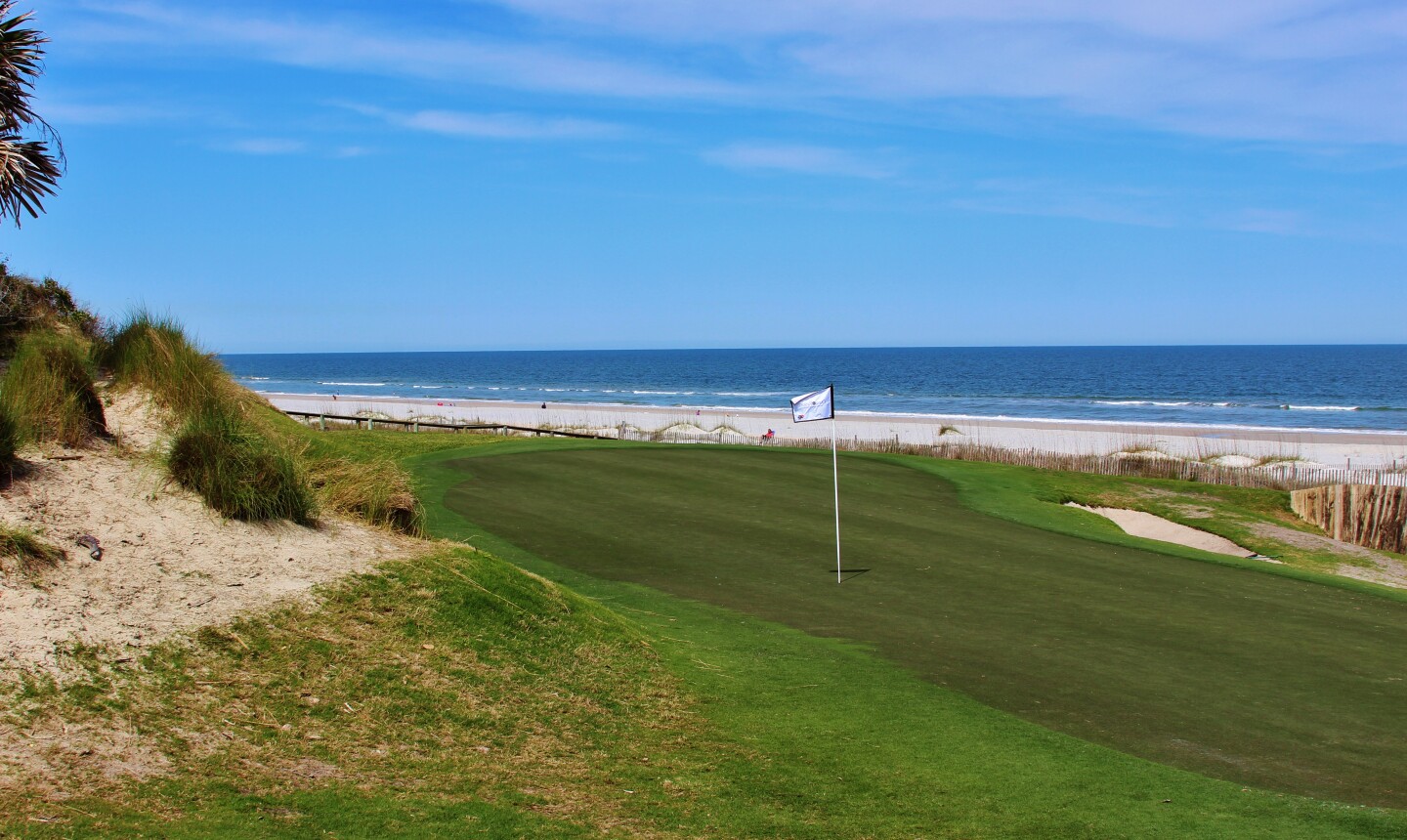 The Atlantic Ocean was visible on the the fifth hole of the Ocean Links golf course at Omni Amelia Island Plantation. Jason Scott Deegan/Golf Advisor 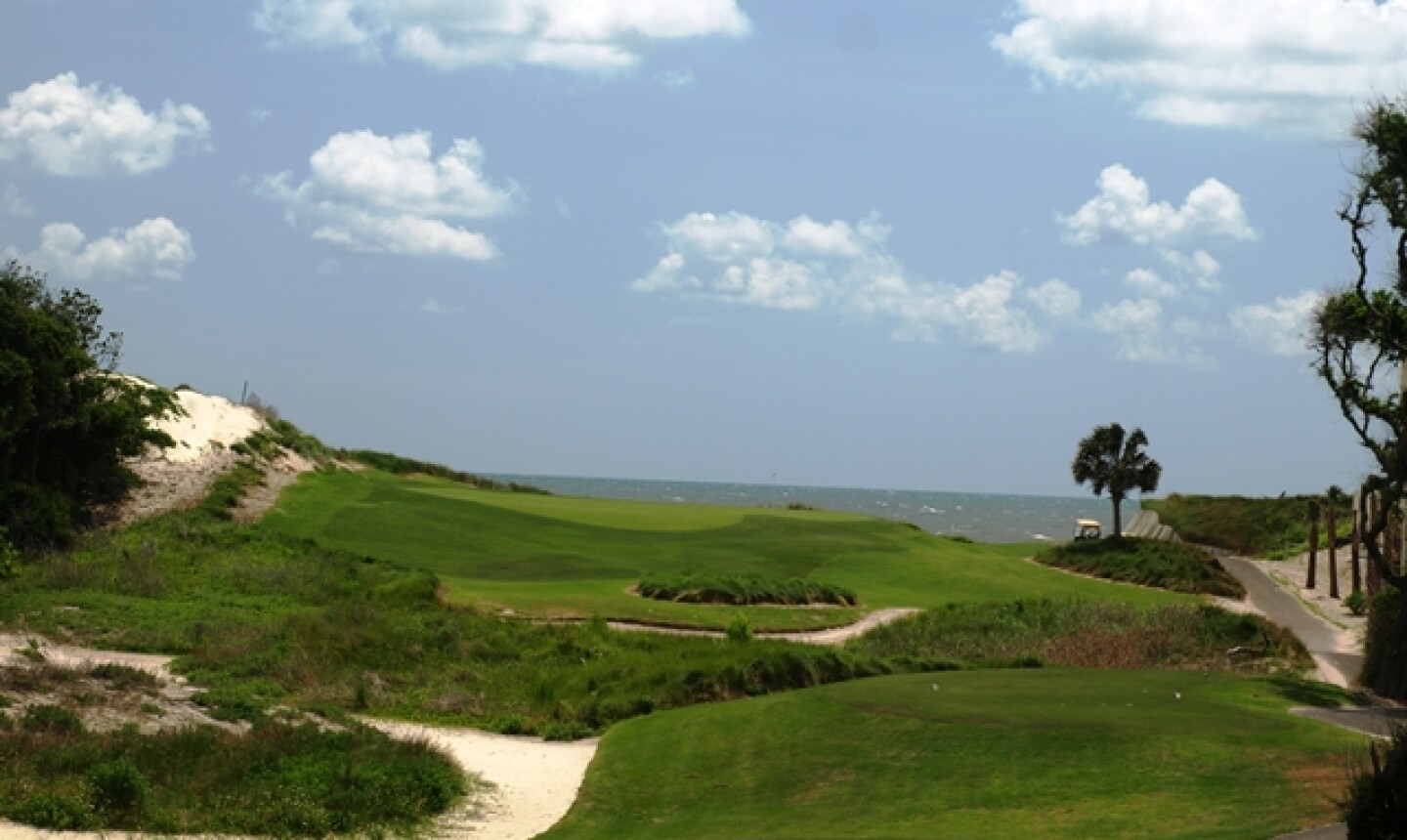 The par-3 15th on the Ocean Links Course at Amelia Island Plantation was another hole with great views of the Atlantic. Mike Bailey/Golf Advisor There will be no more ocean holes at the Omni Amelia Island Plantation Resort on Amelia Island near Jacksonville, Fla., it appears. At least for now.

After bulldozers started plowing up the oceanfront holes on the Ocean Links Course, which was one of two 18-hole courses available to resort guests, it seems unlikely the golf course will survive, although one local group did manage to get an injunction to stop the demolition, at least temporarily. According to a story by Mike Lednovich on gatorgolfmagazine.com, "Attorneys for the 1,400 member Amelia Island Club had filed a complaint against the Omni Plantation saying the closing and demolition of the Ocean Links Golf Course violated the 99-year operating agreement between the resort and the club."

Still, several holes have already been destroyed. Even if the Amelia Island Club is successful, the course will have to be rebuilt.

The demolition came with little warning. It was quickly noticed by local residents who posted pictures on the Fernandina Beach Network site on Facebook on Tuesday, Nov. 14.

Lew Turner, an anchor for a local Jacksonville television station, posted this tweet:

Bulldozing Ocean Links at Amelia Island. Renovations are possible... but considering the website is down and no one has been told anything... ehhhh. pic.twitter.com/239CPJkwMz

Oceanfront property is expensive, so developing the land is usually more profitable than running a golf course, and the Ocean Links Course, which was designed by Pete Dye and Bobby Weed, didn't seem to be that busy most of the time. What exactly will be built there, the resort is not saying as of yet. The company issued this statement:

"As of Nov. 12, 2017, Omni Hotels &amp; Resorts has closed Ocean Links golf course and will re-purpose that land into green space to enable all golf resources to be dedicated to enhancing the Oak Marsh golfing experience. We are pleased to share some already-noticeable improvements on Oak Marsh (the other 18-hole course at the resort), including renovation of all bunkers, restoration and resurfacing of all coquina areas, replacement of bridges on holes 15 and 17, and replacement and restoration of all bulkheads."

In truth, the other course at Amelia Island Planation, Oak Marsh, is the better layout of the two courses. Designed by Pete Dye, the Oak Marsh Course is a terrific design that works its way around beautifully preserved wetlands and majestic oak trees. But the 7,000-yard layout doesn't have ocean holes, which gave the Ocean Links course its panache. Its last round of renovations came in 2013, when it received new greens and practice facilities.

The Ocean Links Course was next to the main resort, which was recently renovated or "reimagined" as the company put it, to the tune of $85 million.

The first nine holes of the Ocean Links Course, which tipped out around 6,100 yards, were designed by Dye, but Weed added the other nine. There were five holes laid out along the Atlantic Ocean.

Mike Bailey
Mike Bailey is a senior staff writer based in Houston. Focusing primarily on golf in the United States, Canada, the Caribbean and Latin America with an occasional trip to Europe and beyond, he contributes course reviews, travel stories and features as well as the occasional equipment review. An award-winning writer and past president of Texas Golf Writers Association, he has more than 25 years in the golf industry. Before accepting his current position in 2008, he was on staff at PGA Magazine, The Golfweek Group and AvidGolfer Magazine. Follow Mike on Twitter at @MikeBaileyGA and Instagram at @MikeStefanBailey.
14 Comments

High rise condo's fill the horizon and block access to the beach.

Tough but unique course, especially those 5 Ocean holes, shame because it stood out amongst so many good but similar courses in the area. Watch this space, the suits will be developing this soon..

I used to be stationed at Mayport and would go to Amelia Island on the weekends. This was a great course, sorry to hear what’s going on.

Madness. That they closed this course. Will not be sending any of my customer to the hotel or golf course anymore.

I will really miss those oceanfront holes. The Amelia Island Resort is still nice, however.

Any company or person that spends $85 million on a course doesn't know "Bo", if u know what I mean! I have seen a lot in my lifetime of poor business decisions & the squandering of money relating to golf or other sports! Too bad!

It was the overall property that was renovated for $85 million. A golf course that pricy would be one of the most expensive ever from scratch. But still, curious move.

That is completely disappointing. While I really liked the Oak Marsh Course, The Ocean Links Course was so much more scenic. The views from those 5 Holes were just magnificent. I might have to rethink future trips to the Omni Amelia Island Resort as a result of this decision!