Getting Around on Golf Vacations: Mantys Picks Up Where Segway Left Off 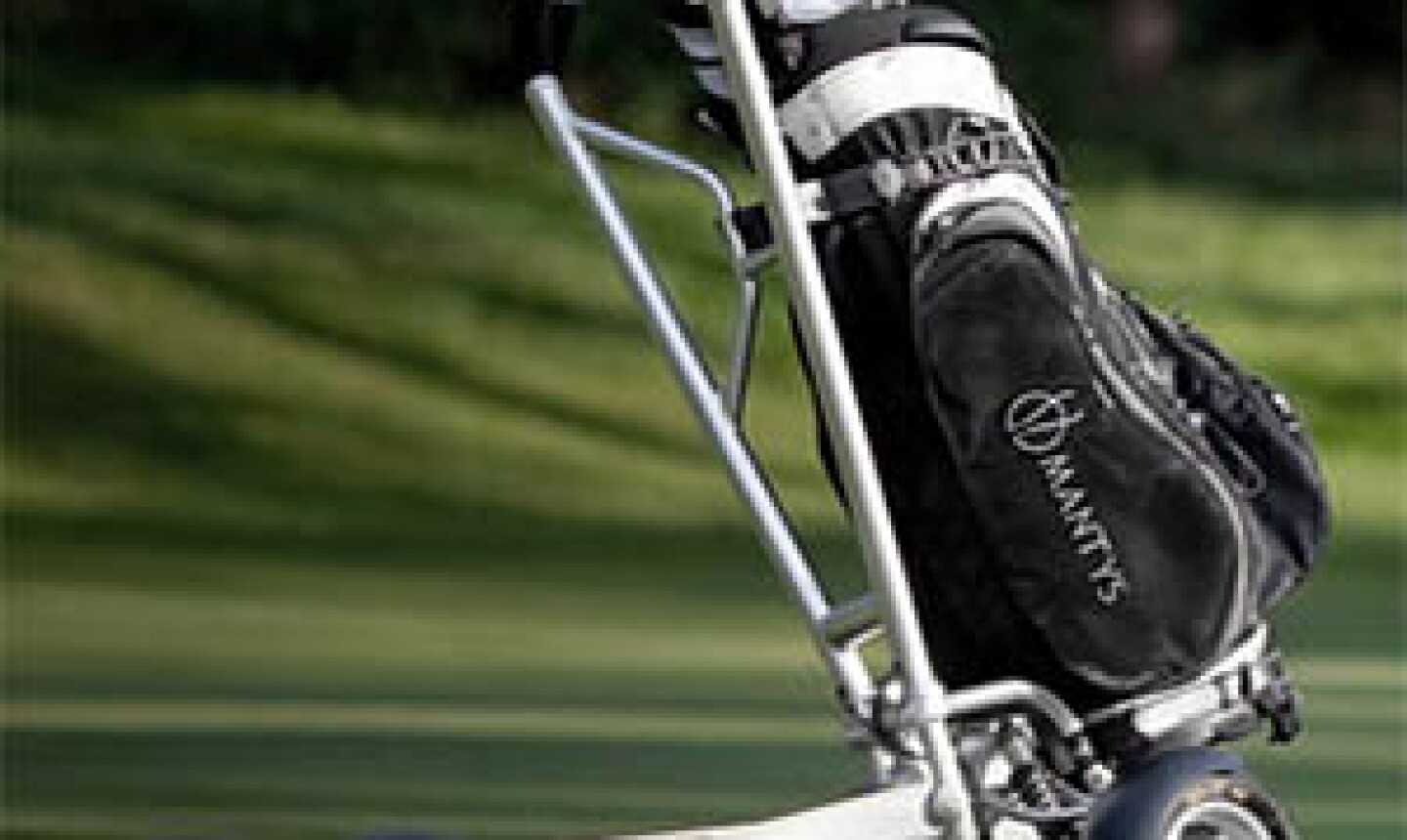 Given the choice, would you rent a Mantys during your golf vacations?

I'm not here to debate walking vs. riding, but I never thought sharing a golf cart made a whole lot of sense, at least from a pace-of-play standpoint.

Yes, single-rider carts have existed for a long time, but golf courses typically keep only one or two around for players with physical limitations. Must be a cost thing.

A few years ago, the Segway was supposed to be the smart new solution for single golfer transport, but it never caught on.

Now there's a new, stand-up, solo-rider vehicle that addresses some of the complaints the Segway received and the company behind it thinks you, and the golf courses you play, are going to get on board. It's called the Mantys (pronounced "mantis") and, like the Segway, it's a stand-up, power "cart" designed for one person and a golf bag.

Power comes from a lithium-ion battery with enough juice for 36 holes. A thumb throttle gets you moving (up to 15 mph), a hand brake assists in stopping, and you steer it by shifting your weight ala skiing or skating.

Unlike the Segway, which many golfers found unstable for golf course use, Mantys' maker (a Netherlands-based firm called Leev Mobility) claims it can negotiate up to 20-degree inclines and its wider wheelbase (it has four wheels instead of two) makes it much more stable on hilly terrain.

While certainly more portable than the Segway (the Mantys can fold down to 16 inches tall), it still weighs a hefty 75 pounds and costs a hefty $3,250.

That's why I think if we see the Mantys at all in wide use, it's going to be because golf courses give it a chance first, and I really hope they do. Sun Mountain Sports is handling U.S. distribution, and they know a thing or two about selling golf bags and carts here.

What do you think? Would you rent a Mantys instead of an old-fashioned golf cart if offered? Think it'll catch on? Please share your comments below.

Craig Better
Craig Better is one of the founding editors of Golf Vacation Insider. In addition to traveling to 15 foreign countries, he has twice traveled across America to play golf courses in all 50 United States. Prior to joining Golf Vacation Insider, Craig was a freelance writer who contributed to GOLF Magazine, Travel + Leisure Golf, Maxim Magazine, USAToday.com, and co-authored Zagat Survey’s book, America’s Top Golf Courses.
28 Comments

Where do I buy this from

A couple of comments. First anything that speeds up play is great. Golf should never take more than 3.5-4 hours and we have gotten away from that terribly in the last 10 years or so.

More important, the single rider carts that are available for people with physical challenges are not prevalent because the majority of golf course owners do not understand the HUGE market that they could be tapping by making their golf courses more accessible.

Thank you,
Fred Brattain
Director Of Instruction and CEO

Hello all.
I am Michael Mazza the GM of Bridgeburg Golf. We are the manufacture of the Turf
Chopper as seen in that youtube video. This site and discussion was brought to my
attention and having read all the previous comments thought I would just take a
second and answer a few of the questions and shed a little light on them.

The Turf Chopper's inventor designed the original back in 2005, not for market but because he is a diehard golfer who had a bad back and was not able to walk 18 holes nor get in and out of a golf cart for 18 either. He made it so that he could walk as long as he could and when his back would start to seize up he could ride the remainder of the course.
It was so popular he and another local business man in Fort Erie Canada decided to
develop the Turf Chopper brand, which began in 2006.
These Turf Choppers have been extensively tested through out the world with great success.
Question of stability; It's very stable. I could talk about split differentials and all the built in safety features of the motor/transaxle, which are the same as what is in electric wheelchairs and mobility scooters, the low centre of gravity or the split leaf spring system but I'm not going too.
It is a motor vehicle and the same caution and care should be taken as if operating any motor vehicle anywhere. Of course these do require some commonsense so if you do not have any you maybe shouldn't use one or any thing for that matter.

There was some mention regarding a cover and drink holders. They are all options available to the Turf Chopper. Also there are available storage bag accessories.

The Price of a Turf Chopper is only $1900. Far less the even a used golf cart and around the price of some of those remote walking caddies.
So do the math. You are getting a single rider electric golf cart and a walk behind bag caddy in one. Also will be fully remote controlled soon as an option.
They are much cheaper to maintain and charge.
They are much more turf friendly the standard carts.
Take 4 time less space to store.
Easy to take with you anywhere.
If you really want more info give Bridgeburg Golf a call. We would be more then happy to explain this great product and answer any questions you may have..
Thanks for reading.

This would be a good thing if the price wasn't so high. For 4 grand I could purchase a moped or a scooter and have money left over to play Peeble Beach, the Trump Course and several other upper end golf courses.

I think these look kind of neat, would certainly try one. If I really liked it I may think about purchasing one. Looks like a neat idea maybe it will catch on, would be kind of nice if it did, because golf carts are heavier and probably do more damage to the course. Also can walk with us or ride which makes it more universal. I think it is a good idea and would like to see them around

How dependable is the battery? How strong is it on inclines? How safe is the braking system? How reliable is the bag holding?

If all of these questions come in favorable then yes I would like to try one.

I saw this on the golf show coverage and couldn't find it I enjoy walking but this would still give you exercise and save the legs some on the hills. I don't know how many courses would allow if you happened to buy one of these. They all want their trail fee or something especially at the public courses. How much they would charge would be a problem plus the legal part if someone fell off and tried to say it was their neglect

I often find myself struggling with the shear size of a cart. More times than not do I suffer from a head bump on the top of the golf cart, or who every I am playing with at the time won't be paying attention and try to drive away before I am fully inside the cart resulting in an awkward grab rail up the backside. I think that these little stand-alone and ride carts would be a change of pace. They would make chasing after, and retrieving your ball a heck of a lot easier in my book. I would have concerns about how smooth of a ride they would offer though. There is nothing I hate more than listening to my clubs smacking against each other in the back of a rough golf cart.

It's the pro or course operator who will decide. If he can make money with his arrangement he has with the course then yes. I would as an individual rent one as I HATE golf carts but now at 71 I more or less have to rent a cart. I can also see more use in the warm climates as there is no provision for rain or colder weather.

I know a lot of us noticed that it seems a little under powered taking the steep grades. So, is there power upgrades?

Kira K. Dixon
Lifestyle Correspondent
Now Reading
Getting Around on Golf Vacations: Mantys Picks Up Where Segway Left Off
New Cookie Policy
WE AND OUR PARTNERS USE COOKIES ON THIS SITE TO IMPROVE OUR SERVICE, PERFORM ANALYTICS, PERSONALIZE ADVERTISING, MEASURE ADVERTISING PERFORMANCE, AND REMEMBER WEBSITE PREFERENCES. BY USING THE SITE, YOU CONSENT TO THESE COOKIES. FOR MORE INFORMATION ON COOKIES INCLUDING HOW TO MANAGE YOUR CONSENT VISIT OUR COOKIE POLICY.
CONTINUE
Search Near Me