LAS VEGAS - Like every other tourist destination during the pandemic, the Strip took a beating in 2020.

From what I saw last weekend, the old Vegas is slowly coming back, and it's as wild and weird as ever. Las Vegas Boulevard was packed with pedestrians. Partially due to social distancing restrictions, there were long waits to ride the High Roller, land a bay at Topgolf and eat at Tilted Kilt in the LINQ Promenade. The only way to get into the pool at the MGM Grand where my family stayed was to be in line by 8 a.m.

Golf has played an integral role in the survival and comeback of Las Vegas during this tumultuous time. The courses were jammed, even though hotels weren't. DragonRidge Country Club in Henderson - once available to guests of the MGM Grand - isn't allowing outside play for the foreseeable future due to a full membership. This is just one example of many.

The tournament golf scene in Las Vegas has never been stronger, either. The exclusive Shadow Creek held its first PGA Tour event, the CJ Cup, last fall, and hosts its first LPGA Tour event, the Bank of Hope LPGA Match Play, next month. This weekend, the Korn Ferry Tour will visit Las Vegas Paiute's Sun Mountain Course for the MGM Resorts Championship. These new events are in addition to the traditional Shriners Hospitals for Children Open at TPC Summerlin every fall.

If you're ready to travel again and considering Sin City, here's a primer on what to expect. Masks are required indoors, but the practice is more hit-or-miss out on the Strip where, as everyone knows, anything goes.

I'd never stayed at the MGM Grand before, which explains why it didn't make my 2015 story of the best Vegas hotels for golfers. It would now, considering its proximity to Topgolf, which opened in 2016. This is the differentiator, its pocket ace (in Vegas terms). Unless you're staying and playing at the Wynn Las Vegas, the MGM Grand is the most logical spot for golfers on a buddies trip. Plus, it's one of the MGM properties that offers access to Shadow Creek.

My wife and two teens had never been to Topgolf, so I took note of their reactions to the vibe, games with the Toptracer technology and food. They fell in love with it all. None of them have much experience playing golf, so the most fun came when an average shot knocked down a wall in "Angry Birds" or stacked and eliminated gems in "Jewel Jam", the two most casual games offered. The food and drinks disappeared in short order (injectable donuts are a must). As the sun went down, the lights of the Strip cranked up the neon glow, illuminating a cool backdrop. Do I have a family foursome blossoming? I doubt it, but I can guarantee Topgolf has surged past seeing a movie, going bowling or playing mini-golf for a family night out.

A day later, we got our first taste of "pool season" in Vegas. The MGM Grand features 6.5 acres of pools, whirlpools and a lazy river. Social distancing protocols mean the pool fills up fast, so show up early. Only 50 percent of patio chairs are made available and all groups are kept 6 feet apart.

The scene was an interesting mix of people ... a group of frat-looking dudes doing shots, while families and kids were swimming and splashing about without a care. The music was upbeat but not obnoxiously so. You couldn't help but relax in the climbing heat. It sure beat pounding pavement like everybody else out on the Strip.

Elsewhere on the Strip

With a family in tow, I kept my golf to a minimum ... 12 holes in less than 90 minutes. It was time well spent discovering one of the game's original short courses, Cloud Nine at Angel Park Golf Club. It is 12 holes and 1,341 yards of an iron-game workout. I mixed tee boxes to play every club in my bag from sand wedge to 6 iron at least once.

The only regret is I played it at 7:30 AM instead of PM. I'm a big fan of night golf and can't wait to try it next time under the lights. The holes sport some characteristics borrowed from famous courses. No. 11 has a bunker in the middle of the green, just like Riviera. The 10th (pictured above) looks nothing like the island green at TPC Sawgrass, but it is a fun challenge, regardless.

It's a good thing I didn't play a full 18. By the end of the day, I ended up walking roughly 11.5 miles (32,943 steps according to my fitbit) to tour what felt like every tourist trap on the Strip - the Grand Canal Shoppes at the Venetian, the Promenade, the High Roller and the Forum Shops at Caesars. Our rest stops were a mid-day pit stop at Siegfried & Roy's Secret Garden and Dolphin Habitat at the Mirage and later dinner at Eataly inside Park MGM. 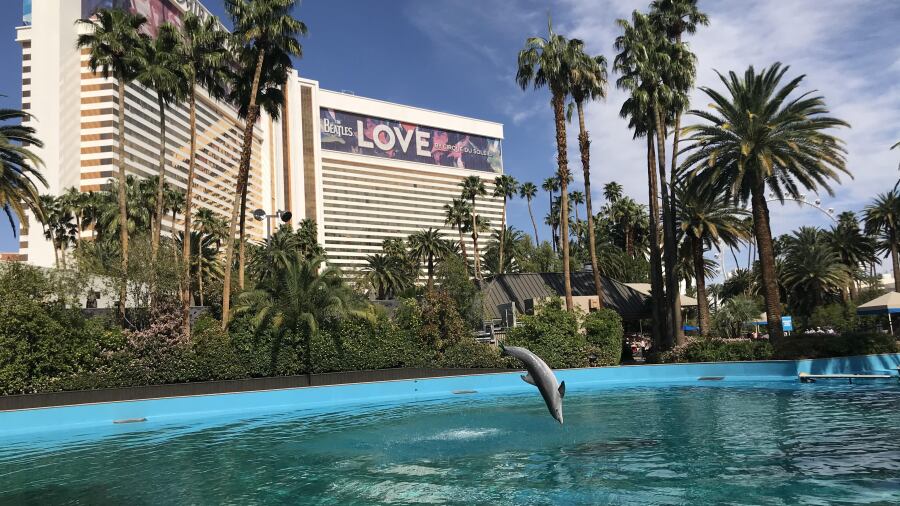 The Siegfried & Roy's Secret Garden and Dolphin Habitat opened in 1990 at the Mirage. Jason Scott Deegan/GolfPass 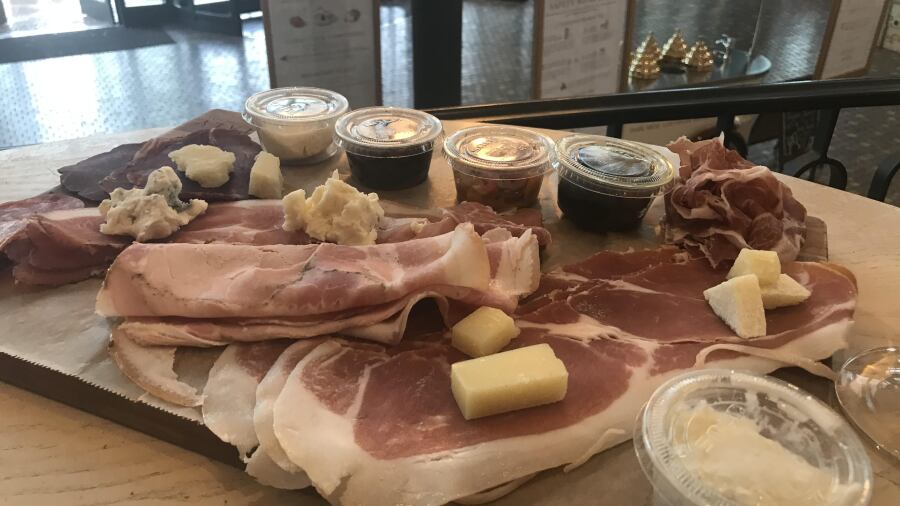 A charcuterie board from Eataly in Las Vegas. Jason Scott Deegan/GolfPass 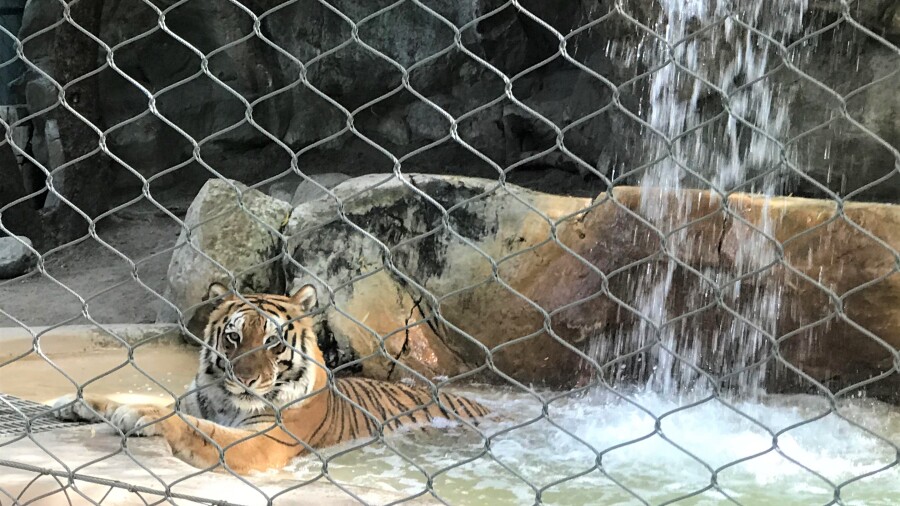 A tiger takes a bath in Siegfried & Roy's Secret Garden and Dolphin Habitat at the Mirage. Jason Scott Deegan/GolfPass 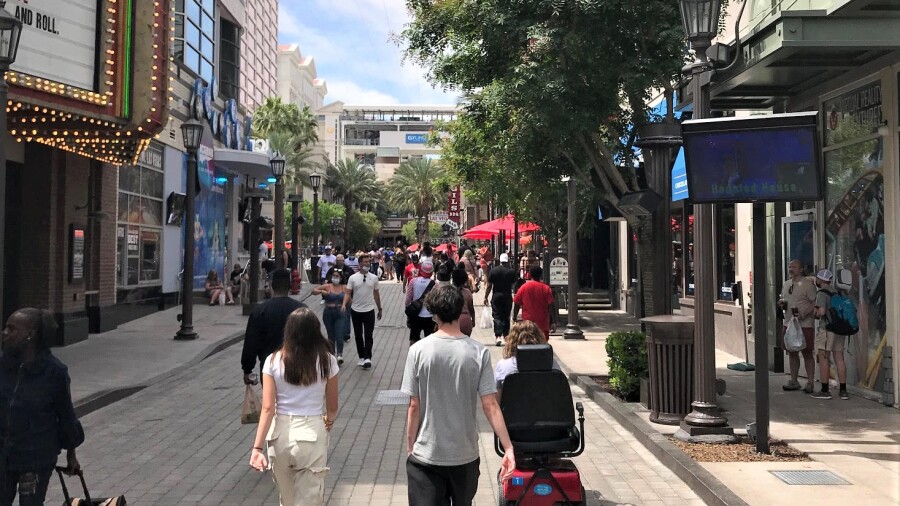 The Secret Garden is perfect for all ages. Guests can cool down in the shade while meeting a white lion, white leopard and tiger. The tiger was especially active, swatting a water ball while bathing. The dolphins put on a show during training, waving hello with their flippers and flying high out of the water in unison.

Meanwhile, Eataly was built to look like a train station as visitors "arrive" off the Strip. It is meant to be a 40,000-square-foot "store" with a multitude of cafes, bars and spaces to buy groceries, learn to cook, eat, drink and dine. Its cuisine transported us to Italy with samples of meats, cheeses, breads and pastas. I should have been too full for dessert, but I wasn't. This is vintage Vegas, where excess isn't just recommended, it's required. Buon appetito! 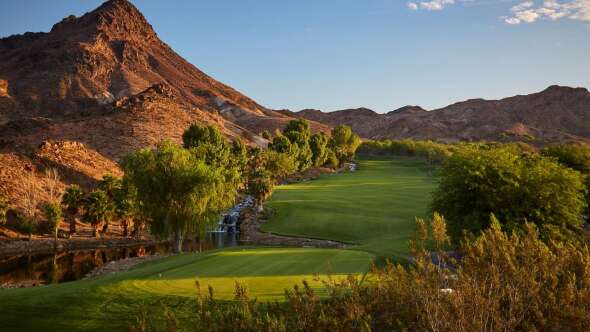