GOLF+, an increasingly popular virtual-reality golf video game, brings an impressive simulation of the game into your living room.

I have been fortunate to play golf in some incredible settings. The rocky, rolling hills of New England. The graceful Lowcountry of South Carolina. The mountains. The desert. The tropics. Rippling linksland.

Recently, I played somewhere I never thought I would, or could: my living room.

Except it didn't look like my living room. I couldn't see the couch, the TV, the bookcases or the baby toys strewn around. Instead, I saw the ribbon fairways, golden fescue and boulder-lined streams of Jack Nicklaus' Valhalla Golf Club, the three-time PGA Championship and 2008 Ryder Cup host.

I was in my living room, I was in Kentucky and I was in the metaverse. Who says you can't be in multiple places at the same time?

Playing golf in virtual reality, thanks to the game GOLF+, can be as exhilarating as it is disorienting. If that sounds like the "real" game of golf, too, that's no coincidence.

I came into the experience as a skeptic, but while VR is not a perfect substitute for proper golf, it is much more impressive and immersive than I expected. It captures much of what makes golf great and points to a future where the game of golf and the video game of golf have something to offer one another, and millions of gamer-golfers as well.

We legitimately think that we can double the size of the entire sport of golf through this technology.

Traditionally, golf video games have skewed either simplistic and almost cartoonish, or hyper-realistic. Nintendo's Mario Golf series has existed in some form or another for more than 30 years, more as a Super Mario Bros. game with a golf flavor than a serious golf game.

On the other hand, games like PGA Tour Golf 2K23 and the older Electronic Arts Tiger Woods-branded titles going back to the 90s are geared more toward die-hard golf fans. As a kid obsessed with green-grass golf, I whiled away plenty of hours playing Microsoft's Links 2003, which had Arnold Palmer as its face and as much fidelity to real-golf-course aesthetics as early-Oughts graphics technology could muster, but little that would appeal to a non-golfer.

GOLF+ is different. It manages to shoot the gap between these two extremes, by design.

The game is full of features that the avid golfer will appreciate, the most important being the growing list of real-life courses that you can strap on your headset and step onto. In addition to the aforementioned Valhalla, GOLF+ gamers can access Wolf Creek Golf Club, an infamously wild and scenic daily-fee course in Mesquite, Nev.; and The Ocean Course at Kiawah Island Golf Resort in South Carolina. Last week, Pinehurst No. 2 made its debut as an available course, while in early December, Pebble Beach Golf Links will make the jump into virtual reality. Three other game-only courses - Cliffs, Castle Links and Alpine - offer mostly plausible-looking holes as well as a hint of what adventurous golf features can be conjured up in the virtual realm.

When it comes to real-world courses in any video game, accuracy matters. And by using LiDAR technology and other hyper-accurate mapping, GOLF+ can replicate everything from the overall scale and sweep of a course's terrain down to the subtle breaks on the greens and translate them to virtual reality.

This is where the graphics impress. I was fortunate to travel to the Carolinas and play both The Ocean Course and Pinehurst No. 2 this past summer. Last week, I played them both on GOLF+ in the space of an hour and came away very impressed with how well the game captures both courses. There is always going to be a slight arcade sheen to any golf course in cyberspace, but the fidelity with which the game simulates these high-profile layouts far exceeded my expectations. 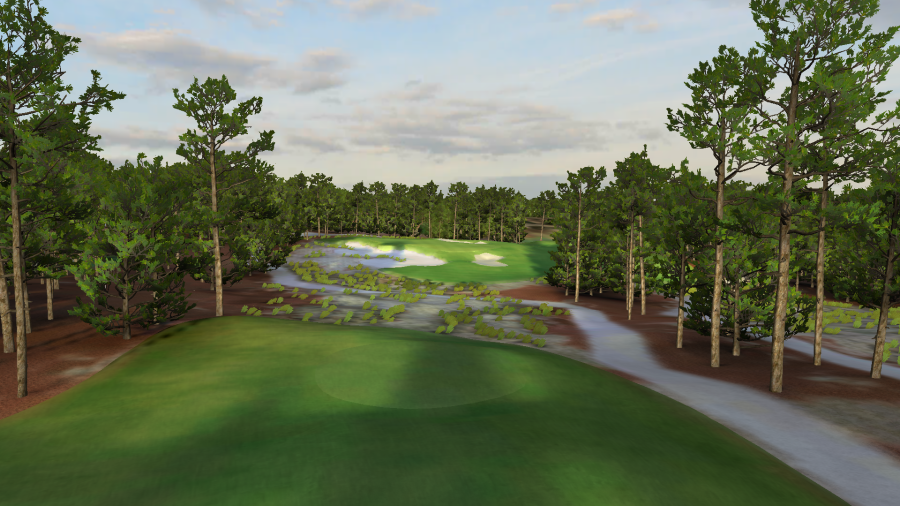 The par-3 9th hole at Pinehurst No. 2 as rendered in virtual-reality video game GOLF+... Courtesy of GOLF+ 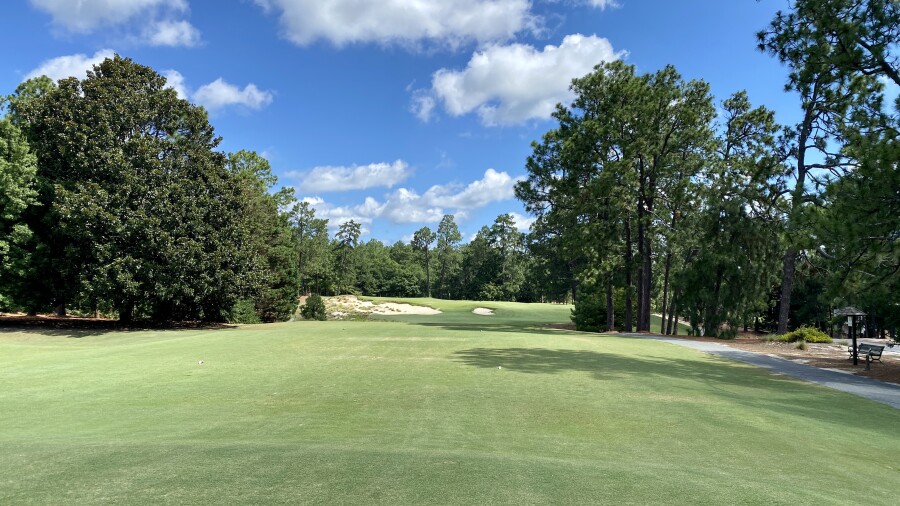 ...and the exact same hole, photographed in July, 2022. Tim Gavrich/GolfPass

In short, playing golf and playing GOLF+ are cousins. A 126-gram Oculus Meta Quest 2 controller is as short and light as a feather compared to a driver, so it requires somewhat different technique than proper golf. You can buy a rig that includes a real club grip on a short-length, 3D-printed shaft with a holder for the controller on it that brings things somewhat closer to reality, but even so, a significant difference in feel remains.

As a result, there is a noticeable learning curve, but a quick one. Driving the ball long and straight is far easier than figuring out touchy chips and greenside bunkers, as I have learned while ping-ponging my ball across elevated greens several times. I carded a 106 in my first GOLF+ round at Valhalla, but after only a little bit of further practice I improved into the upper 80s on rounds 2 and 3 at Kiawah and Pinehurst. I'm confident that I could break 80 soon if I keep at it. That sounds like the eternal tilting-at-windows optimism that many real-life golfers have, doesn't it?

I was particularly impressed at the shotmaking possibilities in GOLF+, thanks to the sophistication of the game and the sensitivity of the VR controllers. As with real clubs, you can manipulate the trajectory of the ball up and down, left and right as desired, and you do it in ways that relate to the technique necessary to, say, hit a low stinger off the tee or a soft-landing flop shot. Some shots can come out wonky if you really try to manipulate the club in wild ways, but overall the dynamics of different shots are intuitive, fun to experiment with and thrilling when executed well. Turns out a chip-in in VR is almost as exciting as in real life.

There are various single and multiplayer games within GOLF+. You can play a standard round, you can join in a tournament against other members of GOLF+'s growing community or you can beat balls to your heart's content or until your headset needs recharging - about 90 minutes of consistent use, in my experience. There are also rotating skills challenges that can earn you XP (experience points), which can level you up and unlock new accessories and in-game amenities. GOLF+ has agreements with both Callaway and TaylorMade that bring both companies' equipment into the game. Got a Stealth driver in the trunk of your car? You could have one in the metaverse, too. Golf-stat nerds can pore over detailed Strokes Gained breakdowns of every round and track their progress across all facets of the game. There are even instructional videos you can watch to help you hone different skills.

It's in the more casual modes that GOLF+ has the ability to turn non-golfers on to the broader game. The game's original form was a putting simulator called Pro Putt, and that heritage remains strong. A selection of elaborate mini-golf courses serves as a logical entry point for many, who can easily graduate to - and hopefully fall in love with - the big game from there. Overarching Novice, Amateur and Pro modes keep newbies from getting discouraged while keeping committed players from getting bored. Unlike most games within the game, GOLF+ seeks to unite all shades of golfer and convert the curious.

As someone who loves playing golf, I am impressed at how well GOLF+ captures the broad strokes of what makes the game compelling, particularly the courses one can play and the variety of shots one can hit. While I don't see myself declining opportunities to play real rounds in favor of at-home play, I do see it helping me scratch the golf itch from the comfort of my living room in the future, especially in evenings or on rainy days. Maybe I'll see you in the golf metaverse sometime.

"We legitimately think that we can double the size of the entire sport of golf through this technology," said Ryan Engle, GOLF+'s CEO and co-founder, "by making it so much easier for people to get a taste of what golf is all about before they've even stepped foot on a golf course."

That's a bold claim, to say the least. The golf industry has tried, to no avail, to turn 25 million American golfers into 50 million since Tiger Woods was a teenager. But tech companies are never shy about sharing lofty ambitions. Whether or not GOLF+ actually presides over the addition of millions of new golfers to courses around the U.S., they do have an intriguing product and a host of influential evangelists. Major champions Rory McIlroy and Jordan Spieth have invested, as have Steph Curry, Tom Brady, Mike Trout and other sports and entertainment stars.

"It excites me that so many younger and first-time golfers are discovering the game in VR," said Spieth. "Once they experience their first great shot, or compete with friends, these new players get a taste of what makes golf so special."

Engle and his team remain confident in their game's potential to attract gamers with an existing taste for VR. They are keenly focused on securing widespread buy-in from avid golfers, which will give GOLF+ long-lasting credibility. Working to place more and more fun and architecturally significant courses, like Pinehurst No. 2 and Pebble Beach, onto the platform is a top priority. "This is a legitimate golf experience that can deepen your relationship with the game versus trying to replace your relationship with it," Engle said.

Architecture is one realm where GOLF+ could have a profound impact. The same LiDAR technology that converts existing courses into VR playgrounds has been used by Tom Doak's crew to replicate the Lido, a pre-World War II masterpiece originally built in New York by C.B. Macdonald, and graft it onto a sandy site in Wisconsin near Sand Valley Golf Resort.

One of the game's celebrity investors is Ben Crenshaw, who with Bill Coore has formed one of the greatest design partnerships in history. Imagine using GOLF+'s platform as a sandbox to test new design ideas.

"This is probably a little ways out," said James Wright, GOLF+'s vice president of business development, "but being able to put something in VR, really play around with it and experience it before you have to go and move dirt and spend ten-plus million dollars? It really unlocks a ton of opportunity for [architects]."

As golfers become more savvy about how compelling architecture heightens the playing experience, it is possible that virtual-reality technology could play a key part in moving the broader game forward. That is an exciting future to contemplate.

Love Golf+ and has realistic feel, and I play real golf.. love this in the Winter time in Michigan where golfing is not happening due to snow.. great fun and alot of courses to choose from.