KANSAS CITY, Mo. – If you're ever in Kansas City on business or pleasure, the first thing that might strike you is how easy it is to get around town. Despite KC being Missouri's largest city population-wise at nearly a half-million people (St. Louis only has 310,000, but a much larger metro population at more than 3 million), it still seems sort of cozy.

The mom-and-pop places still thrive, rush hour really is only an hour long and the things that Kansas City is known for – barbecue burnt ends, the Chiefs, the Royals and the home of baseball's Negro Leagues – are still cherished.

And like any city, it has its favorite sons. Among them are eight-time major champion Tom Watson, who not only was born and grew up nearby in Kansas City, Kan., but still lives in the area and even designed a couple of local golf courses. With that said, you know the golf has to be better than good, and it is, whether it's one of the private clubs like Blue Hill Country Club or the public facilities that are both affordable and fun to play. 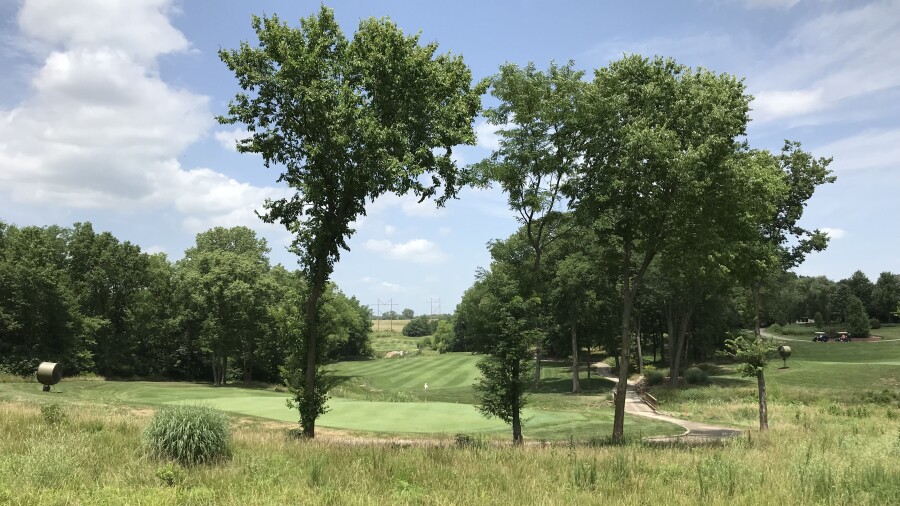 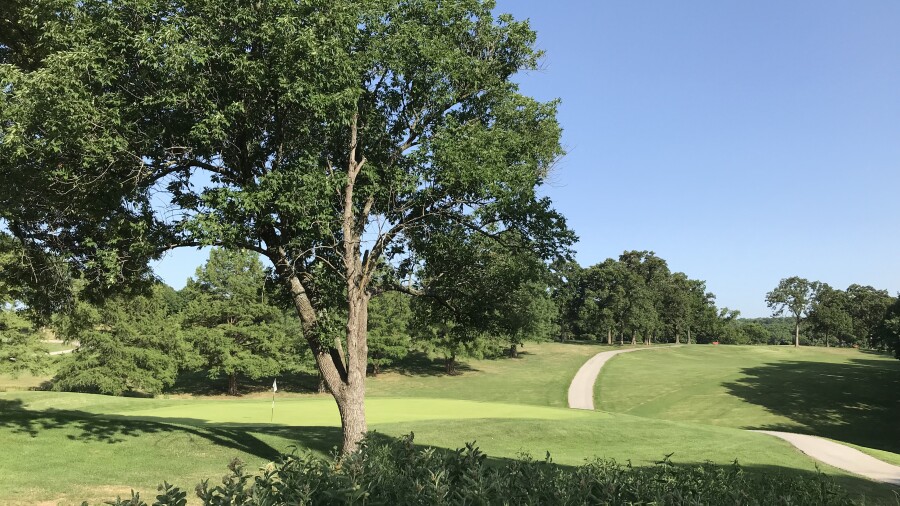 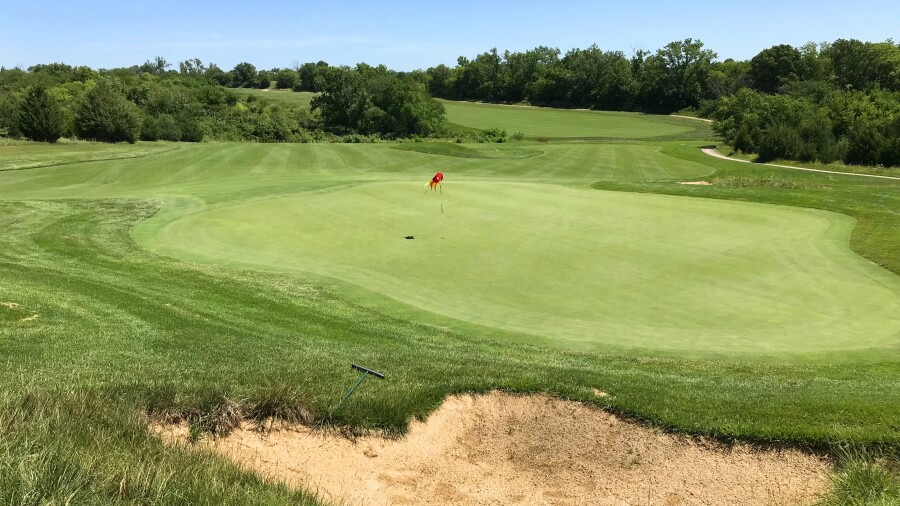 Firekeeper Golf Course, about an hour or so west of Kansas City, ranks among the best casino courses in the country. Mike Bailey/GolfPass 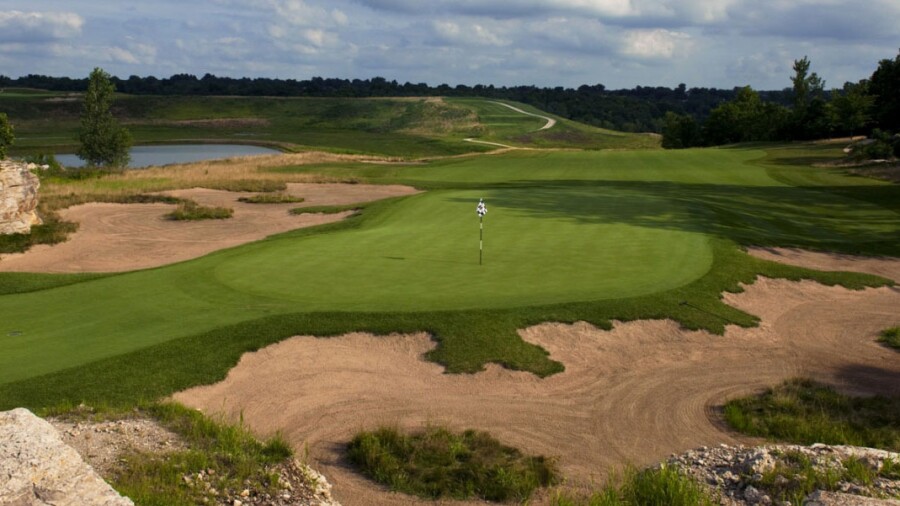 Kansas City's most popular public golf course, Shoal Creek, has just about everything you want – reasonable green fees, interesting layout and good conditions. Owned by the Kansas City Parks and Recreation Department and operated by KemperSports, Shoal Creek is a great value. Not only can you play it for as little as just $33 during the week (including cart), but also it's a terrific layout that's almost always in great shape. Designed by Steve Wolfard (the course opened in 2001), the par-71, plays just less than 7,000 yards from the back tees and meanders through a beautiful piece of rolling property, with streams, ponds, hardwoods and plenty of doglegs. The club also has excellent practice facilities, a nicely stocked golf shop, banquet room and clubhouse grill.

The Deuce at the National Golf Club of Kansas City

Tom Watson designed both courses at The National Golf of Kansas City. And while the Championship Course is fully private, The Deuce is open to the public. The 6,500-yard par 70 is plenty challenging and perfect complement to the Championship Course, which is the more difficult of the two, but considered one of the area's best courses.

Built on preserved farmland, Drum Farm is a semi-private club that features a championship course designed by Michael Hurdzan as well as an executive course and a FootGolf course. The 7,121-yard, par-72 championship course features meandering creeks, rolling zyosia fairways, bentgrass greens and five sets of tees. The club also has a recently renovated clubhouse and fitness center. The best part is that it's one of the best bargains in the area, with green fees starting at $20 to walk.

Located just six miles from Kansas City International Airport, Tiffany Greens is a semi-private golf club that offers excellent conditioning and an interesting test of golf with a great variety of holes. Opened in 1999, the 6,977-yard par 72 course was designed by Robert Trent Jones Jr. The facility also has an indoor golf training facility for those looking for a little help with their games.

Located in Swope Park right next to the Kansas City Zoo, Swope Memorial, originally an A.W. Tillinghast design that opened in 1934, is a real treat to play. The par-72 course, which hosted a PGA Tour event in 1949, is only 6,274 yards from the back tees, but because there are several short holes (and they aren't easy) there are many holes that play fairly long. Plus, there is a lot of elevation change. Some uphill shots easily add two or more clubs to the equation, and the last two holes – a 566-yard par 5 and 404-yard par 4 – are plenty challenging. Then there are the greens, with plenty of slope, so staying below the hole is highly recommended. You can walk this course for $28 during the week and $34 on the weekend, making it one of the best values in Kansas City.

A little under the radar perhaps is Metcalf Ridge which has undergone an evolution in the past few decades. Once known as Rabbit Creek (when it was owned and operated by the Panhandle Eastern Gas Co., for its employees), Metcalf Ridge is an enjoyable 6,400-yard layout with plenty of trees and elevation change. Here you'll find old-style pushup greens (some of them aren't very large), a few water hazards and a couple of difficult uphill approaches, including the par-4 ninth, which has a green 50 feet above the fairway.

A great day trip would be to head over to Firekeeper, which is located a little more than an hour from Kansas City just north of Topeka, Kan., Firekeeper, which is owned by the Prairie Band Potawatomi Nation, was designed by Jeff Brauer in collaboration with former PGA Tour player Notah Begay. Brauer said very little earth was moved to create the course, which takes advantage of natural prairie topography. Firekeeper has been named among the best casino courses in the country and regularly plays hosts to qualifiers and amateur and local professional events. It's plenty difficult, too, especially when the wind is blowing, so unless you're just a glutton for golf punishment, you won't want to play this course from the back tees at 7,500 yards. The course features bentgrass tees, fairways, and greens with fescue rough. And the first and sixth holes share a green. There are not a lot of water hazards on the course, but the occasional stream does come into play. This is also a good opportunity for a stay and play with the casino hotel next door. In fact, a $55 million expansion project will add more a parking garage and more lodging , including 80 rooms right at the golf course.

Some other courses worth checking out

If you head a little bit east of the city to Independence, Mo. area, you can play the only Greg Norman signature course in the Midwest, Stone Canyon Golf Club. Under new ownership since 2014, the 7,059-yard layout has undergone several upgrades, including cutting back some of the native grass to make it more playable. Meanwhile, if you head west to Spring Hill, Kan., Sycamore Ridge Golf Club is worth checking out. New bunkers and cart paths are part of the recent renovations of this 7,081 layout that has a rating/slope of 75.0/141 from the back tees. And finally, if you're looking for a fun, quick 18, check out Teetering Rocks Executive Links in Kansas City. The par-66, 4,500-yard layout is known for its par-3 third, which has a heart-shaped green about 100 feet below an elevated tee.

BBQ and other things to do in Kansas City

Kansas City is famous for barbecue, of course. It's hard to go wrong almost anywhere in Kansas City, but there are some famous places you'll want to check out if you've never been there before.

Two of the most popular spots are Joe's Barbecue in Olathe, Kansas, and Jack Stack, which has several locations around Kansas City. Joe's, known for its ribs and sides, is located in an old gas station. Jack Stack is a larger, more restaurant style establishment that's certainly known for its beef ribs and burnt ends, a KC specialty. Burnt ends, by the way, are the flavorful pieces of meat cut from the point half of a smoked brisket. Those ends are cooked further, but they aren't burned; they just take longer to cook and tenderize. 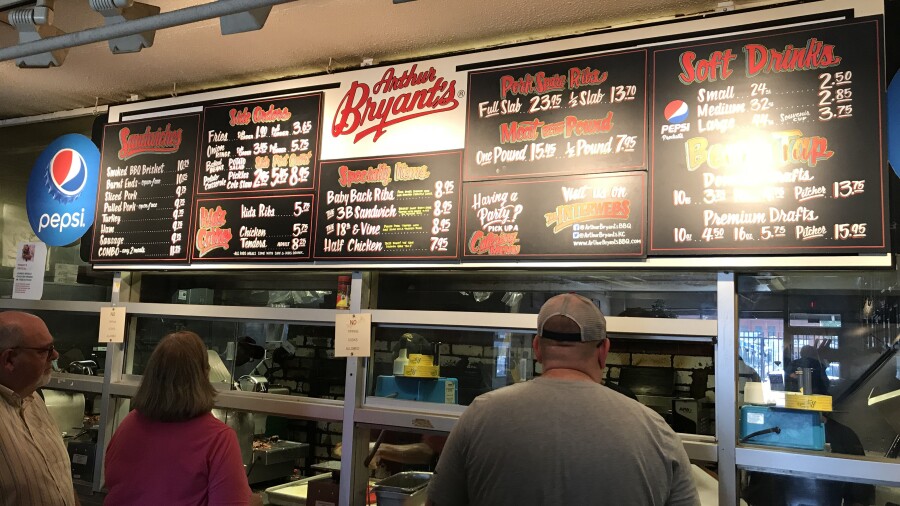 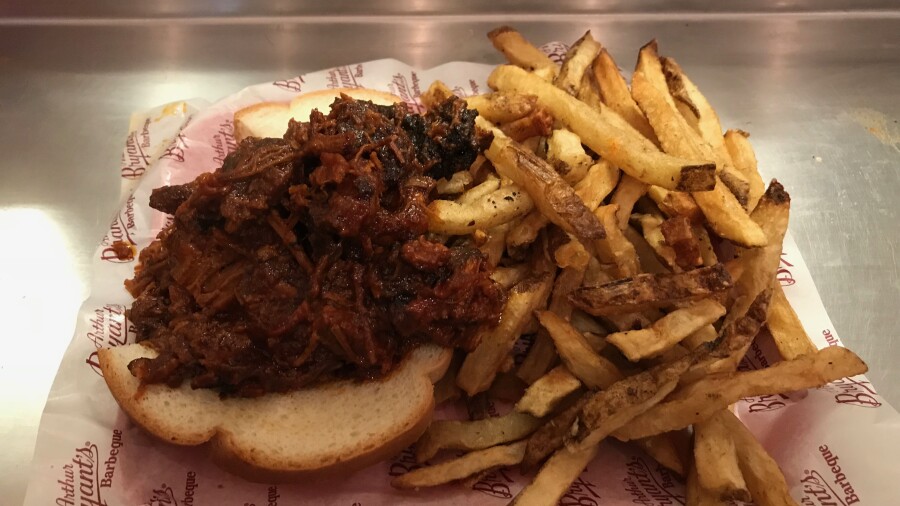 Most locals will tell you, though, that you have to stop by Arthur Bryant's (1727 Brooklyn Ave) if you want to experience Kansas City's most authentic BBQ. Arthur Bryant's, located just four blocks from where the original Municipal Stadium (Kansas City Chiefs and Athletics used to play there) has been around since the Harry Truman days. The barbecue and sides are pretty much still the way they were decades ago, and the portions are certainly on the large side.

Speaking of athletics, Kansas City is not only home to the Chiefs and Royals (the Athletics moved to Oakland in 1968), but it was also one of founding cities of baseball's Negro Leagues back in 1920. Today, the Negro League Baseball Museum in Kansas City preserves the history of the Negro Leagues, which included the Kansas City Monarchs. Located in the 18th and Vine historic district of Kansas City, the museum was "conceived as a museum to tell the complete story of Negro Leagues Baseball, from the average players to the superstars."

Another area of Kansas City worth checking out in the Power & Light District downtown, which offers all sorts of restaurants, entertainment venues and hotels. One such hotel is the historic Hotel Phillips, which recently reopened after a multi-million dollar renovation. When it opened in 1931, the 20-story hotel was the tallest building in Kansas City. Now it offers 216 newly renovated guest rooms and one of the finest Italian restaurants in the city, Tavernonna.

Kansas City is also home to the National World War I Museum and Memorial. Considered one of the best museums of any kind in the country, it's dedicated to sharing the stories of the Great War through the eyes of those who lived it and includes interactive displays, thought-provoking films and one of the largest collections of WWI artifacts in the world.

And finally, if you're interested in learning about one of Missouri's favorite sons, head over the Harry S. Truman Library and Museum in Independence, Mo. Built on a hill overlooking the Kansas City skyline, it was the first presidential library to be created under the provisions of the 1955 Presidential Libraries Act, and is one of thirteen presidential libraries administered by the National Archives and Records Administration. The museum, which chronicles Truman's life and career, is also the final resting place for 33rd president of the United States.

Played Canyon Farms right before it went private and then Ironhorse during a trip a few years back; loved both, really solid conditions on both and enjoyed the elevation changes, bunkers, etc. Helluva good golf city, KC is...