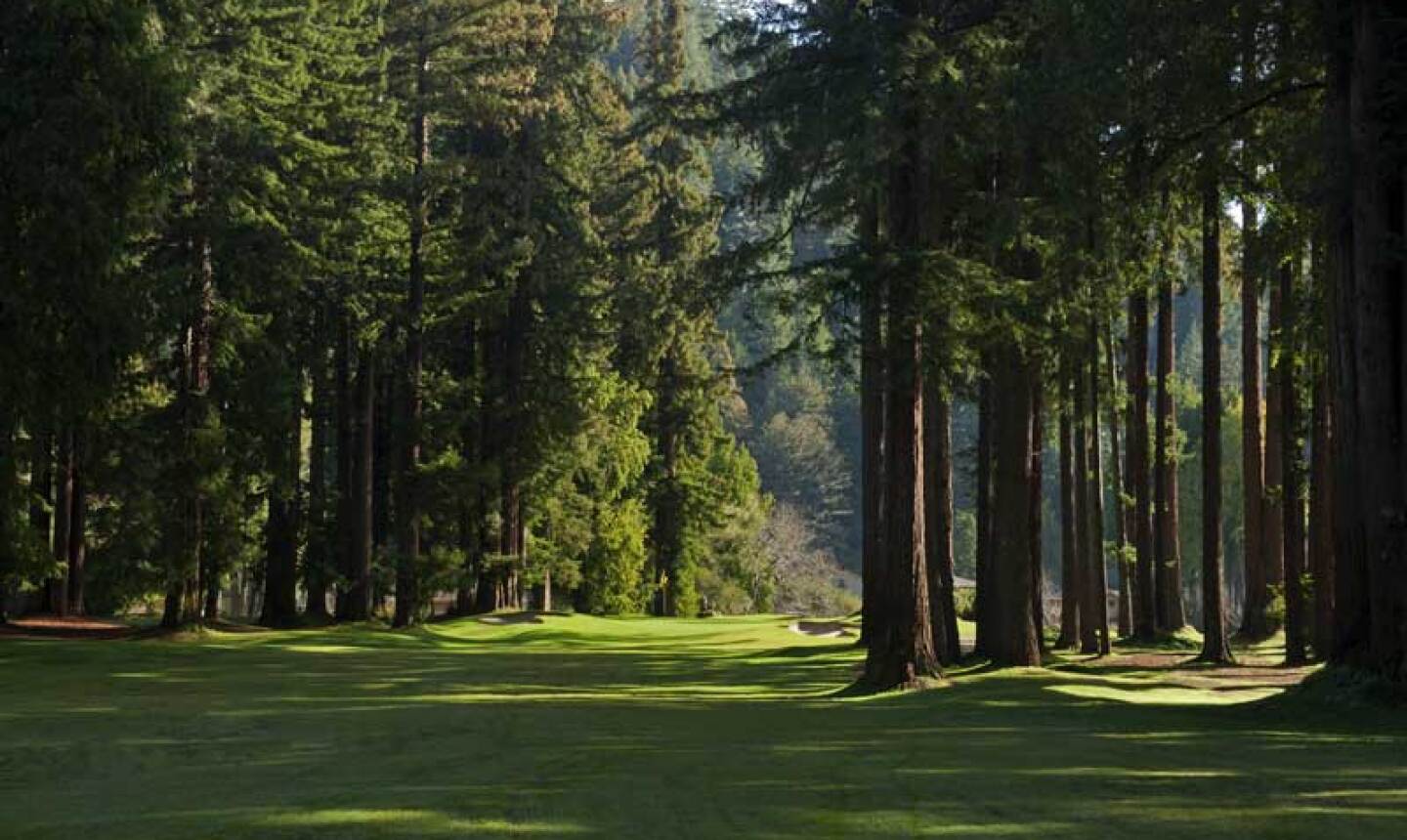 Last week, we published a list of 13 notable nine-hole golf courses in the U.S.

The response was tremendous. And because Golf Vacation Insider readers are the most well-traveled and best-informed golfers on the planet, dozens of them weighed in to let us know their own favorites, which didn't get mentioned.

Of these, the most popular unlisted course?

The layout, which Alister Mackenzie influenced, winds through a forest of redwood trees along the Russian River about 40 minutes west of Santa Rosa. You know the aphorism among golfers that "trees are 90% air"? Not true here. The narrow corridors are mitigated by the fact that the par-36 course tips out at just under 2,900 yards.

The other interesting geographical feature? Across the river from the golf course is the secluded, secretive Bohemian Grove encampment, where the titans of business and art who comprise San Francisco's prestigious Bohemian Club gather each year to socialize.

Another observation from our readers?

Here are some other suggestions, per our loyal readers:

Your selection of 9 hole courses appears very parochial. We have a great many in the U.K which stand comparison with any 9 hole course anywhere.

Norman nominated his own home course, Sutton Bridge in South Lincolnshire, England. Another notable British nine is Royal Worlington and Newmarket, known as "The Sacred Nine" by its acolytes, which include the University of Cambridge golf team.

Other courses we'd include with these:

If you have other international nine-holer nominations, please leave them below in the comments!

Back stateside, a couple of our readers brought up Whitinsville Golf Club in Northbridge, Massachusetts. This superb Donald Ross nine-holer didn't make our list because it's private, but I have heard reports that it may be publicly accessible at certain times. If you're a member of a private club and find yourself in the Boston area, it certainly may be worth asking your pro to place a call to arrange a round on your behalf.

Here are some other private nine-hole courses in the U.S.

Finally, here are some recommendations for other public-accessible nine-hole golf courses, in the words of your fellow readers:

[Sinnissippi] Golf Couse in Rockford, IL is a great course. 3200 yards 35.6 course with 119 slope. 3 holes have challenging hills, ost of the others have length challenges.

You missed a gem in ” Old Brockway” Golf Course, Kings Beach, California. It was built in 1924, on Lake Tahoe, by a noted architect, and was the sight of the first 2 Bing Crosby hosted events, attended by the ” Rat Pack” in 1935 and 1936. Crosby moved his event San Diego in 1937 then eventually to Pebble Beach. A beautiful track cut through the tall Sierra pines with views of Lake Tahoe...

May I suggest another “gem” of a great nine hole course? It’s Carroll Park in Baltimore Md. Has a rich tradition of having attracted a variety of celebs when it was a “12 hole” course, and has since reorganized into a popular 9 hole track in downtown Baltimore. It attracts professionals from all over, and boasts convenient hours,easy access, well kept greens, affordable pricing, and a consumer sensitive staff. Would highly recommend adding it to your list.

I would include Highlands on Cape Cod with its timelessness and the National Seashore...[t]he second is Great Dunes on&nbsp;[Jekyll] Island, GA with some of the smallest greens you’ll find. So much history, personality, and enjoyment

Somewhat surprised Wawashkamo on Mackinac Island, Michigan was not mentioned. Located off of British Landing Road, virtually in the center of the Island – this links style 9 hole golf course has many holes with hilly terrain, tight fairways, and rather small greens. If you are a golf enthusiast or a even history buff type, you may want to consider teeing it up for a round here...

To see more of these suggestions and comments, check out last week's tip. And if you've got a favorite nine-hole golf course you haven't seen mentioned, let us know below!

If by influenced you mean completely designed by Dr. Alister Mackenzie in 1928 then yes you're referring to Northwood

Kira K. Dixon
Lifestyle Correspondent
Now Reading
Great Nine-Hole Golf Courses: Reader Picks
New Cookie Policy
WE AND OUR PARTNERS USE COOKIES ON THIS SITE TO IMPROVE OUR SERVICE, PERFORM ANALYTICS, PERSONALIZE ADVERTISING, MEASURE ADVERTISING PERFORMANCE, AND REMEMBER WEBSITE PREFERENCES. BY USING THE SITE, YOU CONSENT TO THESE COOKIES. FOR MORE INFORMATION ON COOKIES INCLUDING HOW TO MANAGE YOUR CONSENT VISIT OUR COOKIE POLICY.
CONTINUE
Search Near Me