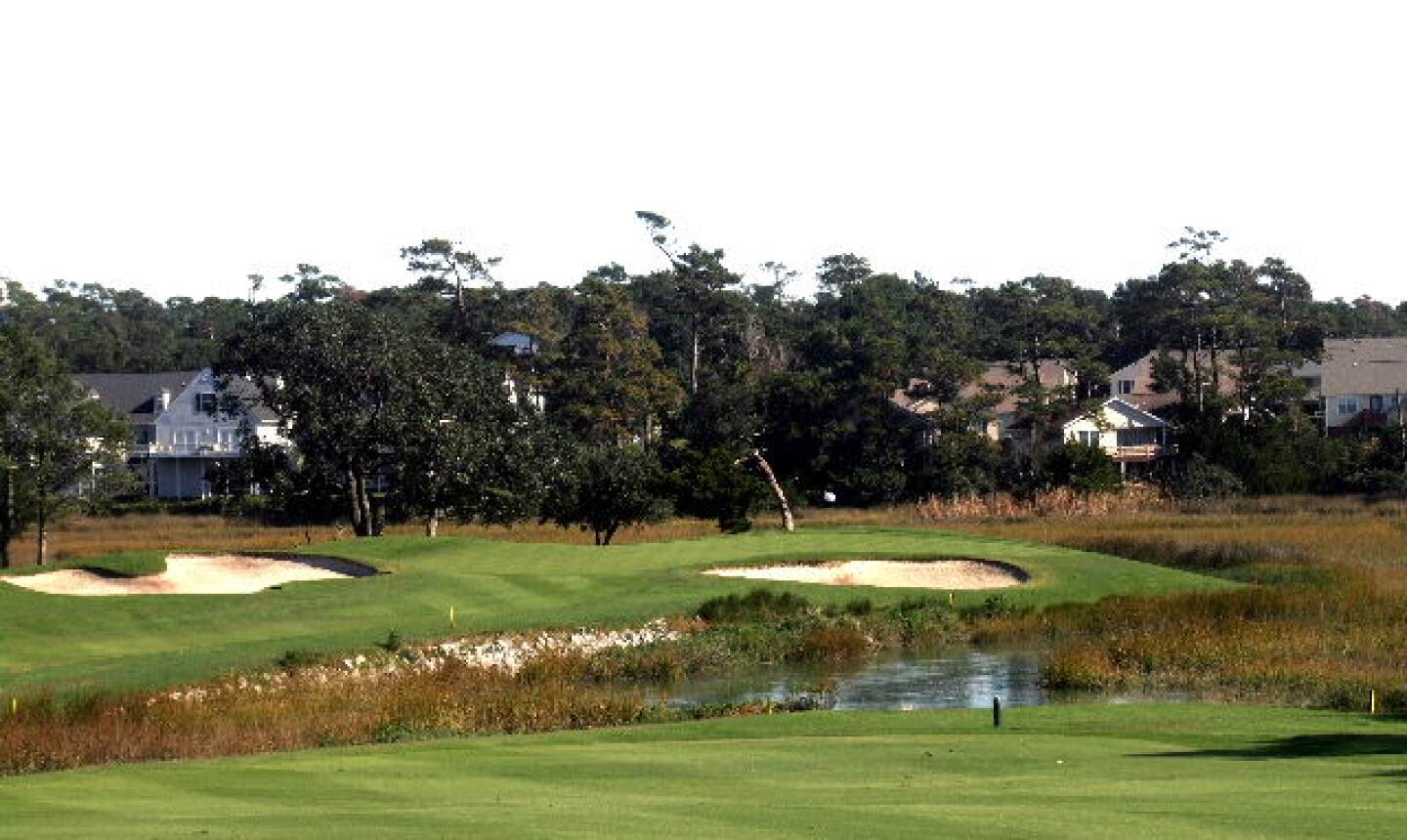 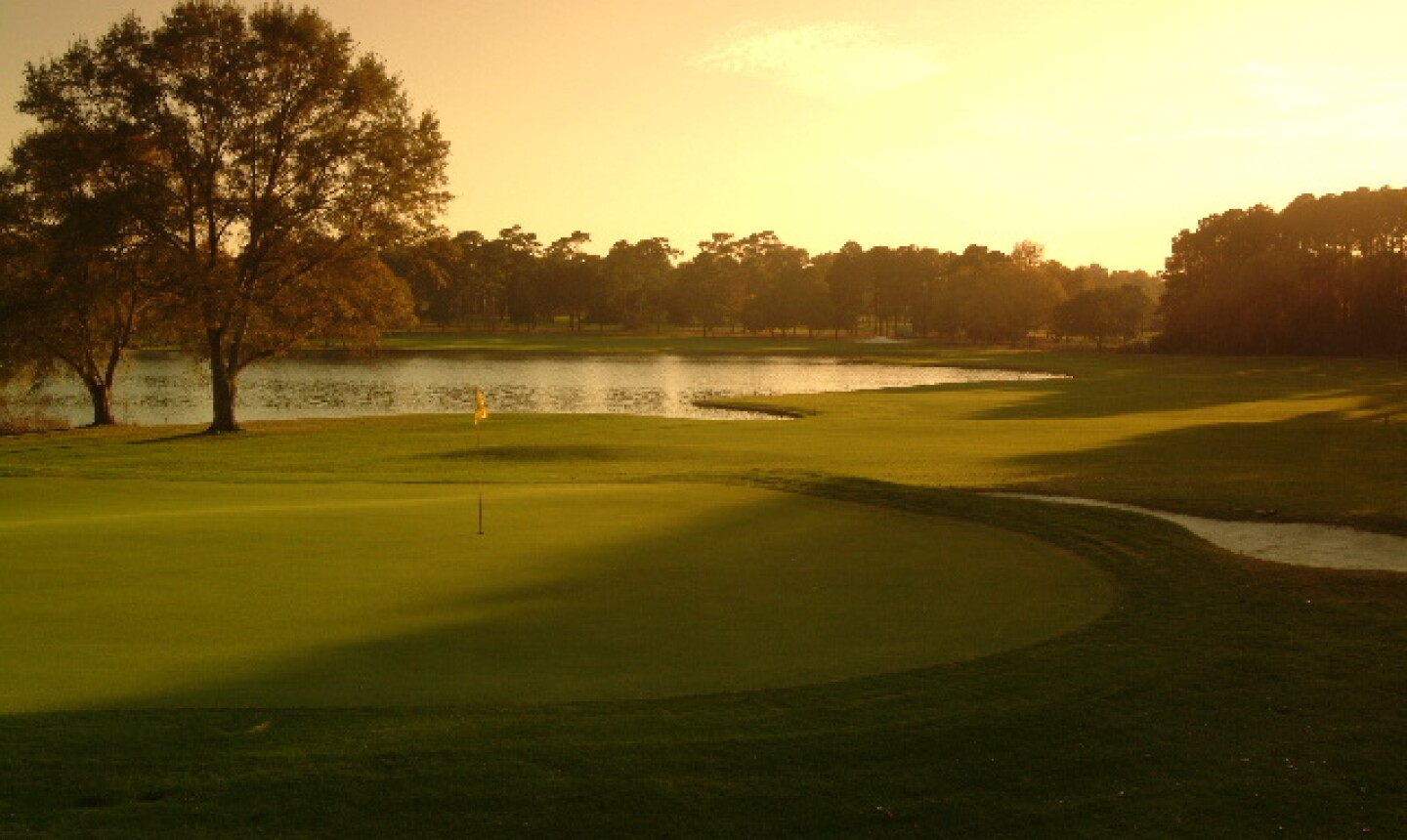 The "Waterloo" wraps around Lake Singleton and is considered Jones' first employment of a "signature hole. Courtesy: Dunes Club

MYRTLE BEACH, S.C. - Sixty years after its conception, The Dunes Golf & Beach Club remains as much as an icon in Myrtle Beach golf as it did when this golf destination was still just a twinkle in a few local businessmen's eyes.

It was these men who gathered in Chapin's Cabin, which sat near where the 11th hole at the Dunes Club now sits, who agreed to begin building more recreation facilities to attract snow birds to the Grand Strand.

The Dunes Club was its centerpiece, and today remains the pinnacle of golf in Myrtle Beach, thanks to an innovative Robert Trent Jones design on 240 acres. The design has been described as one of Jones' most influential courses among his 500-plus designs, where water hazards were first used to encroach fairway landing zones, and the famous par-5 "Waterloo" is considered by many to be his first employment of a signature hole.

The Dunes Club remains plenty long and challenging for the 21st century golfer and from the back tees can be considered one of the Grand Strand's most demanding tests. It hosted the Senior Tour Championship from 1994-1999 and was upgraded and renovated by Jones' son Rees in 2003, which included the installation of faster A1 Bentrass greens.

Most of the greens here are elevated or crowned and heavily splashed with bunkering that offer few flat stances in them. Large bailout areas, like behind the par-5 8th green, make for difficult up-and-downs. Your best bet to score well is a long, 50-foot putt versus shooting for flags, which can be dangerously tucked.

The real meat of the course comes in the middle, starting at the 9th, which is the only hole in Myrtle Beach that can boast an oceanfront backdrop. The hole itself is a menacing short par-3, with an elevated, shallow green and steep bunkers guarding every corner.

From there it's on to the back nine, the club's original nine, which opened in 1949 and uses the property's most scenic terrain. The 10th through 13th are all on the doorstep of the beach. The 11th, "Salt Marsh," plays to a green perched out into its namesake. The par-3 12th plays over the marsh as long as 240 yards, as there is a little used professional tee box just behind the 11th green that is at least worth a look.

From there it's on to the 13th, one of the best-known par 5s in America, "Waterloo." It's an uncomfortable tee shot, as water from Lake Singleton creeps in on the right, and the second shot dares you to cut off as much water as you can, before going uphill to a small, tiered green.

"Some people love it, some people hate it," said Head Pro Dennis Nicholl on the hole. "But it really all depends on how you play it. I play a hybrid off the tee to about 225 yards."

The 14th through 17th play on gently rolling terrain, lined with trees and more undulating than most area course before reaching the 18th, the "Little Gator." It's a fitting, epic finish as well, featuring two alternate tee locations that can create a dogleg right, if needed, and play as long as 430 yards. Depending on where your tee shot is, you may face a blind, uphill approach to a green guarded by water in front and bunkers surrounding the green.

The Dunes is a perennial pick as the Grand Strand's best golf course, and rightfully so. It has it all: scenery, difficulty, top conditions and history. The A1 Bentgrass greens installed during Rees Jones' redesign particularly shine from the fall through spring and are lightning fast and smooth, making putting here a real treat.

This is the kind of course that in many ways you want to see a few times to get a true appreciation for its design intricacies. No approach shot here is easy, and finding the ideal fairway landing zones between bunkers aren't always obvious. This is certainly a members course in that regard.

The Dunes Club is semi-private and offers limited public play - about a third of rounds played here are by guests. To get a tee time, you must book a package with a partnering hotel or condo. They also offer special reciprocal rates for members at other clubs. Green fees peak at $196.

The club utilizes an alternate par-3 hole wedged between "Waterloo" and the 14th. It's used when another hole needs maintenance.

Brandon Tucker
Brandon Tucker is the Sr. Managing Editor for Golf Advisor. Prior to the launch of Golf Advisor in 2014, he was the managing editor for Golf Channel Digital's Courses & Travel. To date, his golf travels have taken him to over two dozen countries and nearly 600 golf courses worldwide. While he's played some of the most prestigious courses in the world, Tucker's favorite way to play the game is on a great muni in under three hours. Follow Brandon on Twitter at @BrandonTucker and on Instagram @btuck34.
0 Comments
Related Links
More from the author

Kira K. Dixon
Lifestyle Correspondent
Now Reading
Historic Dunes Golf & Beach Club still the class act of Myrtle Beach
New Cookie Policy
WE AND OUR PARTNERS USE COOKIES ON THIS SITE TO IMPROVE OUR SERVICE, PERFORM ANALYTICS, PERSONALIZE ADVERTISING, MEASURE ADVERTISING PERFORMANCE, AND REMEMBER WEBSITE PREFERENCES. BY USING THE SITE, YOU CONSENT TO THESE COOKIES. FOR MORE INFORMATION ON COOKIES INCLUDING HOW TO MANAGE YOUR CONSENT VISIT OUR COOKIE POLICY.
CONTINUE
Search Near Me