It's better to be a golfer in the north

Your courses may be covered in snow now, but the rewards are worth it in the summer.

When you're in the doldrums of wintertime living in the north, it's pretty easy to grow jealous of your southern-based comrades.

Those in the south are in short sleeves on green grass while you're shoveling snow and lamenting the latest heating bill.

I'm Midwestern-born and vividly remember my first trip south when I was 8 years old: a Christmas morning sprint on icy roads to a Detroit Metro Airport full of frenzied passengers and terminal pandemonium. Hours later I was feeling balmy winter breezes and gazing up at palm trees. Orlando was a magical place indeed.

I've lived in various parts of the south since college from Florida to South Carolina to Texas and even at sea for awhile (ask me later). I've decided that the allure of year-round golf may be strong, but it's better to be a golfer living in the north.

There is little rhythm in the southern golf calendar. When it's perfect spring or fall weather, course conditions are usually in transition. In the winter time, sure, you can play more than up north. But cold fronts are bound to interrupt regular games. The worst is in October when, usually right as the heat finally breaks, courses overseed their greens. Perfect temperatures paired with wet and shaggy putting surfaces. It's torture.

The other thing that drives me mad about golf down south is that when the days are longest in the summer, it's uncomfortably hot. For someone with major summer nostalgia for regularly walking 18 holes AFTER dinner in Michigan, it's just not as fulfilling when you're on the course at twilight and still sweating.

By comparison, golf season was so natural and effortless in the Midwest. The snow melted, you'd put away your ice skates and dust off your golf bag. Your game would be in shambles for the first month as the courses dried out. Then school would get out for summer, the days were long and you'd play all the time in various junior tournaments. At the end of summer there was the three-day city junior tournament - a big deal covered by the local press - which teed up the high school golf tryouts and the fall season, where hopefully your scores would peak. By the end of the year, during Regionals and hopefully States, the leaves were an annoyance all over the course and the temperature and daylight waned. Thin iron shots in frigid temps shocked your whole body. By the time of your last putt of the year you were ready to not look at clubs for awhile and take out some pent up aggression back on the ice.

Speaking of competition, I've found it's a lot harder to find the weekday, after-work golf leagues in the south. They are a staple in the Midwest. I can't think of anything that is more gloriously "Detroit" than a mom and dad who have a Tuesday bowling league in the winter replaced with a 9-hole golf league in the summer.

Before you think golfers in the south play a lot more than in the north, consider the National Golf Foundation's 2019 participation report. The West Central and East Central regions of the U.S. had the highest participatory rate. And West-Central golfers average the most rounds per year - more than even the coveted South-Atlantic region home to golf meccas Florida, Georgia and the Carolinas. 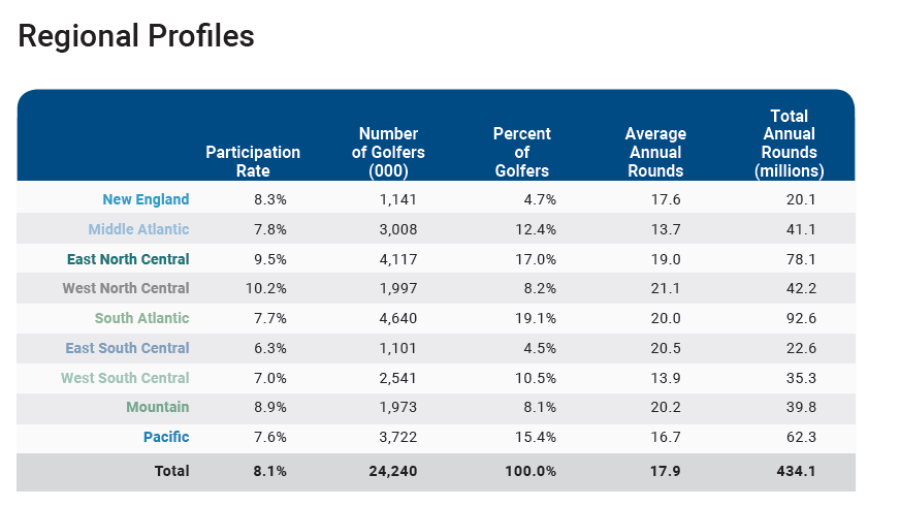 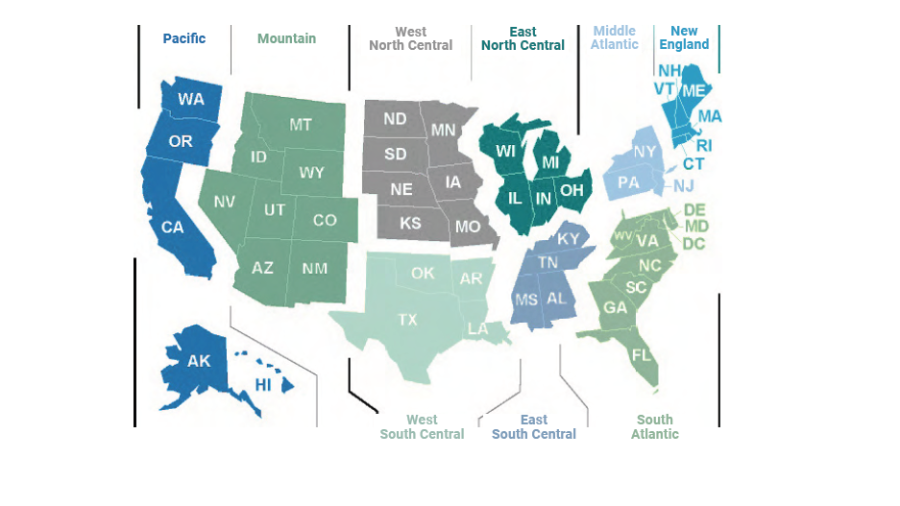 I suspect this has as much to do with seasonality as it does affordability. You can get a pretty decent round of golf around many cities in the Midwest for $20-40. It seems a little easier to maintain a northern, bent-grass course on a tight budget than deal with various growth, diseases and year-round wear-and-tear in the south. Only the highest-end southern courses in prime time have bermuda or zoysia turf and maintenance standards that are as optimal as northern bent grass greens in the summer (those Texas or Carolinas courses that try to pull off bent greens have to work minor miracles to keep them alive).

And don't discount the baked-in cost of a golf cart. Walking golf courses is more comfortable and natural to northern courses than the south. Developing for retirees and snowbirds seems to have led to more cart-first routings through neighborhoods.

I was curious when my own, southern-based "peak season" was in 2019. To find out, I charted all of the 2019 rounds I saved in either The Grint or my Garmin Golf apps. I used "date played" and score to par in this chart.

I played the most golf in May, then slowed down a bit in the grueling summer heat, then picked it back up in September-October. My scores were better in October and I had fewer rounds in the 90's. My personal "off-season" was a loose combination of August and the back half of December and early January. Southern golfers lack the sensational excitement of a year's first round after months of hibernation. We take the assumption of year-round play for granted.

So, northern golfers, this January you may be watching golf on TV in Hawaii and California. Your hands' blisters are from shoveling snow and not grinding on the range. But trust there is a golfer down here in Texas, currently looking at his green-grass front lawn on a 60-degree day who thinks you've got it pretty, pretty good.

Is it better to be a golfer who lives in the north or south? Let us know in the comments below! 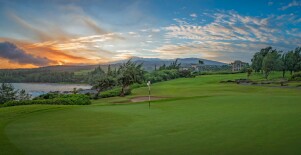 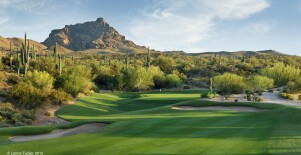 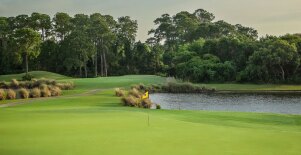 Brandon Tucker
Brandon Tucker is the Sr. Managing Editor for GolfPass and was the founding editor of Golf Advisor in 2014, he was the managing editor for Golf Channel Digital's Courses & Travel. To date, his golf travels have taken him to over two dozen countries and nearly 600 golf courses worldwide. While he's played some of the most prestigious courses in the world, Tucker's favorite way to play the game is on a great muni in under three hours. Follow Brandon on Twitter at @BrandonTucker and on Instagram at @btuck34.
18 Comments

This is the dumbest thing I've read in years.enjoy your freezing cold winter's, I'll enjoy year round golf.

I live in Atlanta, and this January, I played 9 rounds of golf. In order to play golf to you best potential you must lay close to 100 rounds a year. This is easy to do in the south east, but impossible to do in the North or Midwest.

Where did you get the 100 rounds rule?

Central/Northern California has absolutely best year round golf weather, not to mention some of the best courses in the world.

I first played golf in Eastern Iowa in my 40s. I know the joy of late snow that allows a round in early December. I also know late snow that interrupts the spring thaw in April. With the exception of those seven years in Iowa I have lived in more balmy climes. I prefer my southern golf in here in Texas. Walking at sunrise year round, first on the course, opens the day like no other experience. I bold southern "Fore!" for southern golf.

Thanks Brandon for another insightful & fun article.

My vote is for golf in the South. But you're right, I'll take Northern bent greens anytime over Bermuda.

I share your nostalgia for Midwestern golf, having grown up in northern Indiana.

I'm a walking golfer too; and right, too many southern courses are laid out for carts.

Overall though, I love being able to anticipate a round of golf 48 out of 52 weeks a year, even if I don't always get out that often.

Thanks for sharing and congrats on shooting your age!

Central Ohio golf is about as good as it gets. Hardly any snow and it usually melts in a couple days when we do get it. The last 4 years I've played golf every month. As long as it's not 30mph winds I'm out in the 40's. Courses all reduce their prices in Dec thru March. Only the higher end public courses close. I occasionally made trips to the south in the winter to play but haven't been impressed with the quality of the courses unless you are willing to pay $100; I'm not anymore.

I come from Scotland we play all year round,conditions are very different in winter but you have to layer up ,be prepared for four seasons in one round and adapt to the conditions which can vary from frozen fairways and greens to very wet conditions.
Not many people use carts in winter but walk the courses either carrying or using an electric trolley,due to the often cold conditions a round rarely will take over 3.5 hours.
I enjoy winter conditions as it is a challenge to adapt to different conditions and accept that the golf and scores will perhaps not be the best but will also use the winter to change and practice for the coming season

Interesting take on north-south golf....and a lot of people will notice that. Having about 40 years as a north guy, followed by about 7 as a north and south guy....I can assure everyone that almost nothing in this article is actually true....just sayin’.....

I'm originally from Boston and now live in North Carolina. I must say that nothing could be finer for a golfer than to live in Carolina, near Myrtle Beach. I tracked my 150 rounds one year and found out the month with the most rounds was in January as winter golf is heavenly even when in the middle 30s when I tee up early in the morning. I do recall the elation of that first round of the year, slogging thru the mud and yuck. But nothing can beat Fall Golf up North with the coolness and firm fairways on days you feel like walking the course all day.

I lived in Myrtle for about 18 months and as a local I struggled with the seasonal crowds, double-teeing and slow play during the cooler months.

As my wife says often when I'm driving my car, what's your hurry? Where would you rather be than on s beautiful golf courses surrounded by other golfers. Life is too short not to enjoy the experience. I didn't play any golf in 2019 due to knee surgery and rehab. I play for the first time next Friday on a simple par 3 course. I'm excited as if I was playing Pebble.

Have to admit, I enjoy playing during twilight in June and July, north of Seattle. Have thought about playing when in southern climes for work conferences, and decide not to when I realize it will be dark well before I'd finish.