The 36-hole muni outside of Calgary has reopened after a 2013 flood almost destroyed it forever.

Stay and play in Kananaskis Country

KANANASKIS, Alberta, Canada - The view from the trail behind the Pomeroy Kananaskis Mountain Lodge is simply breathtaking.

From certain vantage points, hotel guests and hikers can see the entire Kananaskis Valley, a scenic view of pines and the winding Kananaskis River accented by a backdrop of mountain peaks. The only sign of a human footprint is certain corridors of the 36-hole Kananaskis Country Golf Course, located about 75 miles west of Calgary in the Canadian Rockies.

One fateful day - June 19, 2013 - almost ruined these vistas forever. A devastating flood considered the worst in Alberta history ravaged the entire region, including the valley floor, covering the courses with silt, mud and debris. The devastation throughout the province (five killed and an estimated $5 billion in damage) was massive and disheartening.

All was not lost at Kananaskis, but it would take time and much political debate to heal the wounds. Five years - and a reported $23 million (Canadian) - later, the government-owned Kananaskis facility reopened in 2018. Local architect Gary Browning restored the two Robert Trent Jones Sr. courses, Mount Kidd and Mount Lorette, to their former glory, giving golfers one more fantastic option to stay and play in the Canadian Rockies. Even the hotel has been upgraded, proving Kananaskis is back better than ever.

I first laid eyes upon Kananaskis in 2010, playing the Mount Kidd course. My return this summer was an eventful 36-hole day capped off by some incredible wildlife encounters. The courses were in peak shape, even if the weather misbehaved a bit. A lingering mist and intermittent rain blocked views of the surrounding peaks. The river, raging full tilt after a wet spring, held our attention at the ground level. At least four holes on each routing flirt with the newly refortified river bank.

Browning's renovation efforts brought about some changes. New tees were added and severe undulations on the greens were softened to improve playability. A few holes received minor tweaks from the original routings dating to 1983-84. The green on the fifth hole on Mount Lorette, now a par 5, had to be moved away from the river to account for a wildlife area that has been fenced off and deemed out of bounds.

Putting out on the sixth, our foursome encountered a creature I've never seen before on a course. A wolf emerged from the tree cover near the seventh tee, shook its fur dry and sauntered off into the woods. That afternoon on Mount Kidd, a young black bear played through. The pure wilderness at Kananaskis - no homes, no roads - is why it's such a special experience at half the cost of the two heralded Fairmont courses at Banff Springs and Jasper Park Lodge. If I were ranking muni courses in North America, these two would be in the top 10, no doubt.

Although both Kananaskis courses are very comparable, I favor Mount Lorette slightly. The epic finish along the river - the 193-yard 15th, the 369-yard 16th and 185-yard 17th - is quite memorable. For the record, Mount Kidd might have the two best river holes on property: The downhill par-3 fourth over the water and the short 330-yard, par-4 fifth bending along the bank.

The clubhouse, set up on a ridge, wasn't damaged in the flooding. An outdoor patio overlooks the double green that serves both courses. In between rounds, my foursome ate an excellent lunch and used the fireplace to warm up inside the Summit Restaurant. The weather in the mountains can get fierce quickly. Pack appropriately. Storing extra layers in your golf bag is never a bad idea.

Have you played the two Kananaskis courses? Review them here! 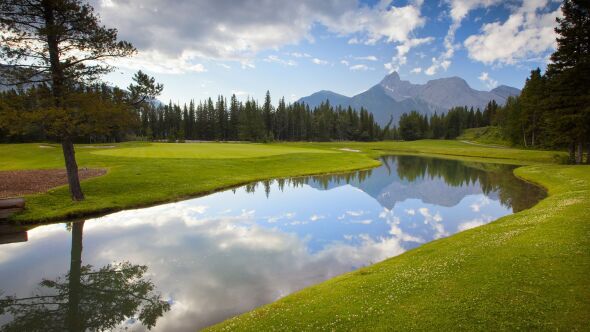 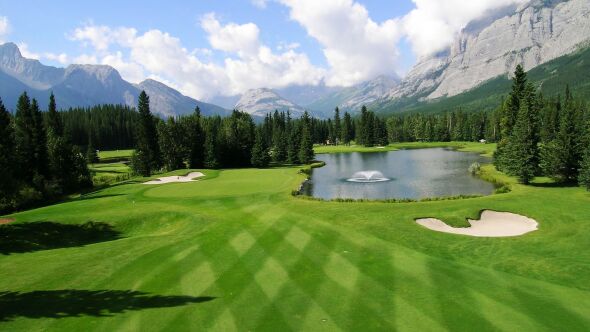 The changes to the lodge weren't so subtle. As a new member of the Autograph Collection by Marriott, the lodge offers reward points or guests can use them to stay. It's also good that the hotel offers a shuttle to and from the course through a seasonal golf package. Golfers not on a package must pay a separate fee for the five-mile journey.

The lodge feels more luxurious than rustic, catering to families (like mine), couples, golfers and adventurers. The new indoor waterpark is probably the most important upgrade. Even my teens - too old for zero entry pools - had a good time on the three mini-water slides.

A new Nordic Spa is the adult version of the waterpark. It's an outdoor day spa ($70 for hotel guests) with a relaxation lodge, five outdoor pools of varying temperatures, five steam and sauna cabins, winterized hammocks, fireside lounges, massage treatment rooms and a bistro. Hydrotherapy might be just what you need after a long day of hiking or 36 holes of golf. Alas, I didn't have time to partake.

We dined one evening at the Blacktail Bar, a casual hang just off the lobby. For a full dinner experience, the more formal Cedar Room and Forte Restaurant are options. Every evening, guests gather at an outdoor firepit for complimentary S'mores. Our two-bedroom, two-room suite allowed mom and dad to crash early after craft beers and wine at dinner, and the teens to watch TV and cruise their phones all night in privacy. Sound like your family vacation, too?

The mountain village surrounding Kananaskis isn't much, just a couple stores, a market and Woody's Pub in another lodging property. Its main purpose is providing a place to unwind outdoors. The fewer the buildings the better if you ask me. You're here to see Mother Nature's handiwork, not man's.

I worked as a maintenance man at the resort in1991. It's awesome that you are making the place beautiful again.