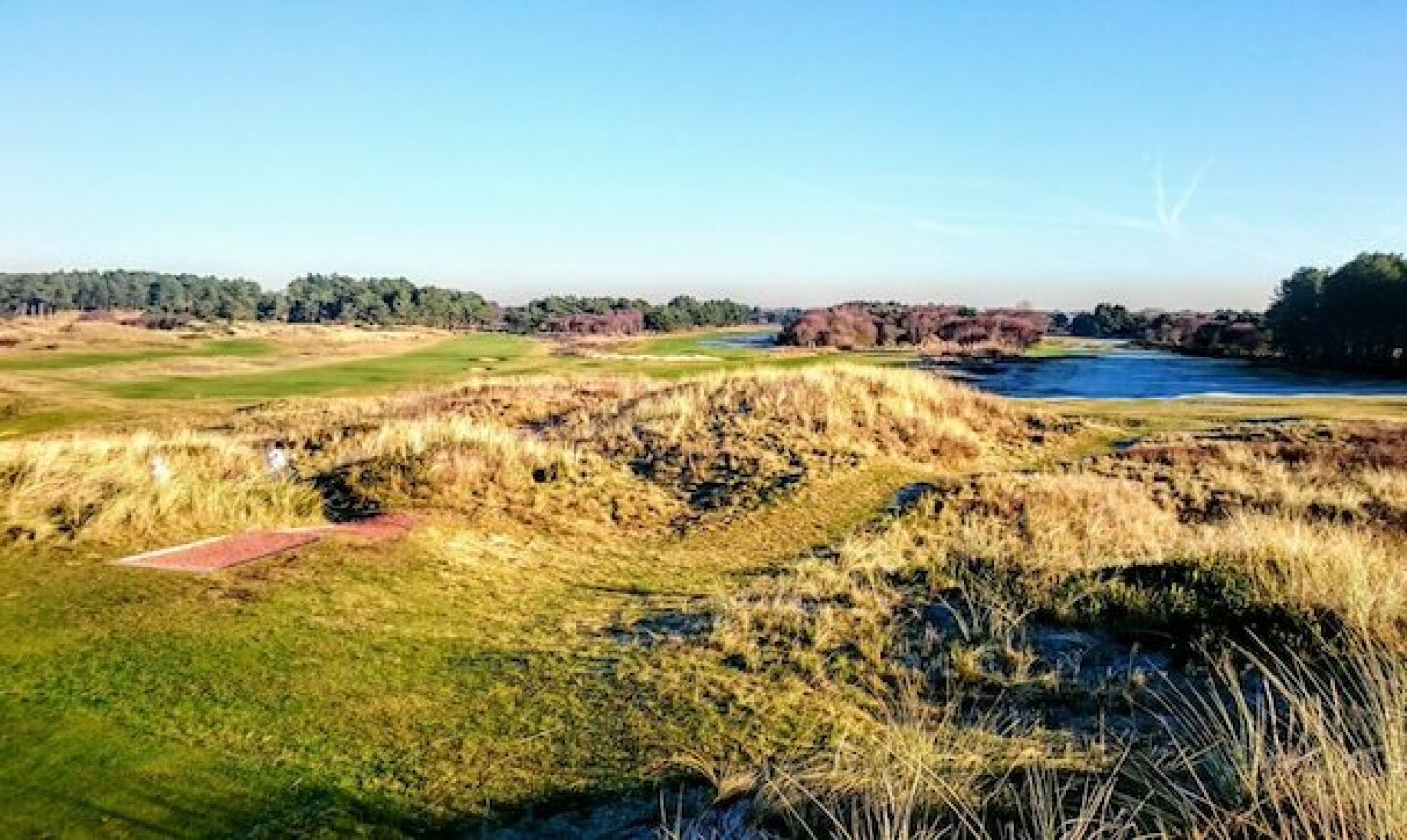 One of the more contentious stories in golf over past couple years has centered on the question of whether or not women will be allowed to take up membership at some of the golf clubs whose courses comprise the Open Championship rota.

Now, Muirfield and its Honourable Company of Edinburgh Golfers are embroiled in similar controversy, as the lone remaining traditional Open venue with an all-male membership. A vote of the membership that affirmed the policy last year resulted in the R&A taking Muirfield out of the Open rota. A new vote has been called, and the results are expected any day now.

The history of single-sex membership policies at golf clubs has had an interesting consequence that escapes the notice of most golfers:

Borne out of necessity for women golfers who were barred entry to their husbands' home clubs, these courses sprouted up at the same time as "traditional" (read: all-male) clubs in the UK and Scotland in the 19th century. At one point, there were dozens of ladies' clubs and courses in the late 1800s.

There are few ladies' golf courses around today, but they can be found in some of the most prestigious places for golf, and unlike the clubs that prompted their founding, they have had a largely inclusive attitude throughout history.

What's more, they can be a fun addition to a golf trip. Four quick reasons why:

Here are some examples:

Sunningdale Heath (Sunningdale Ladies) Golf Club - Located next door to the vaunted heathland courses of Sunningdale Golf Club in Surrey, south of London, Sunningdale Heath (formerly Sunningdale Ladies, but still home to the Sunningdale Ladies society) tops out at only 3,700 yards from its back tees, making it akin to what Americans would call an "executive course." But the par-60 layout, designed by Harry Colt in the early years of the 20th century, is no pushover. At just £30 for visitors, it makes an inexpensive add-on to any golf itinerary in this wonderful part of the golfing world.
Play here if you're also playing... Sunningdale (Old and New), St. George's Hill Golf Club, Swinley Forest Golf Club, The Berkshire Golf Club

Formby Ladies Golf Club - Formby Golf Club is firmly ensconced in any good list of England's best inland courses outside of the London area, located as it is just north of Liverpool and close to the coast, but no so much that it is considered a links. The ladies course is on the same property and while it only plays to about 5,300 yards, par 67, from the longest tees, no less a figure than Greg Norman has praised the way in which the course has held up over nearly 110 years.
Play here if you're also playing... Formby Golf Club, Royal Liverpool Golf Club, Royal Birkdale Golf Club, Southport and Ainsdale Golf Club

Lundin Ladies Golf Club - With nine holes measuring less than 2,300 yards (par 34), this course and its club are run by ladies - only women can become full members, though men are welcome to play the course and purchase annual tickets to play the course regularly. Located just a dozen miles south of St. Andrews, Lundin Ladies was designed by five-time Open champion James Braid, who laid out dozens of excellent courses throughout the United Kingdom. A unique sight greets players on the tee of the second hole, a 262-yard par four: three "standing stones" (think Stonehenge) in the middle of the fairway.
Play here if you're also playing... Lundin Golf Club; The Golf House Club, Elie; Crail Golfing Society, Kingsbarns Golf Links, St. Andrews (all courses)

Himalayas Putting Course - Speaking of St. Andrews, did you know that this impressive, mammoth putting green is the official course of the St. Andrews Ladies' Putting Club? The club dates back 150 years, founded originally by daughters, sisters and wives of members of the all-male Royal & Ancient Golf Club. The course was originally intended to be a pitch-and-putt but as maintenance practices improved, a putter became the only club needed to enjoy this unique layout. The Ladies Putting Club now has approximately 200 members.
Play here if you're also playing... Anywhere in or around St. Andrews. It's an essential item on any golfer's bucket list.

Ladies Golf Club of Toronto - The U.K. is not alone when it comes to ladies' golf clubs, though this is the only remaining club of its kind in North America. It dates back to 1924, founded by Ada Mackenzie, one of the greatest Canadian amateur golfers in history. The course was designed by legendary architect Stanley Thompson, and has an intriguing 21-hole layout, played in different configurations depending on whether one is playing nine or 18 holes. Access may be tricky, as Ladies Golf Club functions more like an American private club than a U.K. club. Here, only women can be full members, though men are welcome to become "Guest Card Holders." That said, the club has reciprocal arrangements with many area clubs, and your home pro might be able to get you on with a phone call.
Play here if you're also playing... Angus Glen Golf Club, Glen Abbey Golf Club.

Have you played any of these ladies' golf courses? Let us know your thoughts below in the comments!

It is nice to learn more about ladies golf courses worldwide - information that is not readily available. It is also especially good to hear favourable comments about Ladies' Golf Club of Toronto - once one of Toronto's best kept secrets.
Please though, don't confuse this brand with anything other than Ladies' Golf Club of Toronto or " Ladies' " for short. It should not be called (as referenced above) 'Toronto Ladies' OR 'Toronto Golf Club' which is something quite different! Thank you!

THE ABERDEEN LADIES GOLF CLUB FORMED IN 1892. THEY AGREED TO LEASE GROUND FROM THE ROYAL ABERDEEN GOLF CLUB. THEY ARE ONE OF ONLY 11 CLUBS IN BRITAIN TO OWN THEIR CLUBHOUSE AND REMAIN IN FULL CONTROL OF THEIR CLUB.

Woman golfer--
Could you clarify your position a bit? The term "executive course" is commonly used to describe a golf course that is significantly shorter than the more prevalent "championship" courses out there. Characterizing courses like Sunningdale Ladies and Lundin Ladies in that manner is meant to simply give an accurate description.

As for "guest card holders" at Toronto Golf Club, that is the literal designation reserved for men who play the course regularly. The club itself uses that phrase.

Like you, I believe the way in which golf has been historically unfriendly to women is perhaps its biggest shortcoming, and it's pretty crazy that in 2017, that's still largely the case. I am encouraged, however, that 32% of all junior golfers are girls, which represents a major recent increase. But there's a long way to go. I look forward to seeing the trend of women adopting golf continue; it will make the game better.

I was hoping to finally read something that pertained to women and women's golf trips. But the whole article, again, has a male slant, "executive course", "guest card holder". As the golf industry in general tries to be more inclusive and is looking for ways to increase the interest in golf, they have continued to with-hold support and recognition for women golfers. Your organization, I guess, is no different. I encourage you to recognize both genders in future articles. My husband and I both travel on golf vacations!

Have played it a few times. We have a reciprocal agreement with Toronto Ladies and Cedar Brae Golf Club.

I was a card holder at Ladies for close to 40 years and lived thru course renovations, a new pro shop and changes to the clubhouse. Throughout all of this I was able to play an incredibly challenging golf course. Tee times for guest card holders always fit into our early morning needs. There was always a competitive friendly Card holder group who were warmly welcomed by the members and staff. In addition the clubhouse features one of the finest kitchens and menus in the Toronto area. Truly a gem that needs to be experienced.

My father used to be a Card Holder at Toronto Ladies, and loved it. I never had the opportunity, but he raved about it.
Thanks for the info on Lundin Ladies...I'll be reaching out to them about our future trips.
Scott Cowan
www [dot] cowangolfcompany [dot] com

One way to play the Ladies Golf Club of Toronto is to play on the GTAAMTOUR. On the GTA Amateur Tour (mostly male competitors) we have played Ladies Golf Club (Toronto) the last few Summers. All 4 flights on our Tour from Scratch to 20 plus handicaps compete on this historic Thompson design. This old style tree lined course is a challenge for us, while we all play the exact same yardage. You have to think your way around this course and play smart. The last 3 holes have risk reward opportunities and many have lived to regret their decision to take the "risk". If you have the chance to play here .... go for it ! There is nothing EASY about this Ladies' Golf Club. Martin Gorman the GTA AMATEUR Tour

Great post! Will look to incorporate into my itinerary on my next UK trip.

By Jason Scott Deegan
Read More
Load More
Popular
Strokes Gained isn't just a stat for the pros anymore. Here's why and how you can use it in your game
Golf travel's greatest debates
Punch Shots: Our staff reacts to the top 100 lists
Omni PGA Frisco Resort in Texas seeks to become the 'new modern home of American golf'
Editorial Staff

Kira K. Dixon
Lifestyle Correspondent
Now Reading
Ladies' Golf Courses: A Rare Golf Trip Treat
New Cookie Policy
WE AND OUR PARTNERS USE COOKIES ON THIS SITE TO IMPROVE OUR SERVICE, PERFORM ANALYTICS, PERSONALIZE ADVERTISING, MEASURE ADVERTISING PERFORMANCE, AND REMEMBER WEBSITE PREFERENCES. BY USING THE SITE, YOU CONSENT TO THESE COOKIES. FOR MORE INFORMATION ON COOKIES INCLUDING HOW TO MANAGE YOUR CONSENT VISIT OUR COOKIE POLICY.
CONTINUE
Search Near Me