Lessons from a 100-year-old golfer

WOODSIDE, Calif. - Bob Williams steps up to hit a tee shot on the second hole at the Menlo Country Club.

"This is going to be great!" he proclaims.

His short and simple swing delivers a 90-yard bullet right down the middle of the fairway. Williams, who turned 100 on June 23, is still striping it.

Williams has lived an incredible life, with stories for days, but it's his continued dedication to the game that should be an inspiration to every golfer. Williams plays at least nine holes every Sunday at the private club where he's been a member for nearly four decades.

"The prospect of a good shot spurs me on," he said.

That positive attitude is what Stanford University Women's Golf Coach Anne Walker loves about Williams. She recorded his swing with her phone at a golf clinic Williams attended earlier this year. She told him he could still shoot his age, a feat he's accomplished 7 or 8 times.

“I told him 'I never want to forget this swing'," she recalled. "I want this for inspiration, for me, for my kids. The swing is beautiful."

Within 6 days, I witnessed a friend’s 9yrold make his first par and teed it up with another friend’s 100yrold grandpa. A game for a lifetime, indeed. pic.twitter.com/ANwS7zdEAB

A game for a lifetime

Carol Mayer Marshall, Williams' wife of 20-plus years; his grandson, Don Taylor; and I took turns teeing the ball up for him during our recent round together at Menlo CC. While driving the cart, I would pull up adjacent to his ball, so he could take a step or two, swing and return with minimal effort.

On the 11th hole, he put a golfer half his age to shame, lashing a fairway wood from 99 yards to within a few feet of the cup. He couldn't see the shot until we drove closer to the green. "Pick it up!" he told me when the ball came into view. His bogey bested my sloppy double.

Williams doesn't worry too much about score these days. "I am so lucky to have some of my marbles left and be in the physical condition I am," he said.

Williams walks 2-4 miles every day around his Menlo Park home. He also credits his four passions for keeping his mind sharp: a love of writing, his alma maters, sportsmanship and veterans. He was a two-sport athlete in the Naval Academy, where he struck up a lifelong friendship with roommate Alan Shepard, the future astronaut. Williams also went on to a decorated career, both as a ship officer during World War II and later as a naval aviator. He got his masters at Stanford University and eventually became a leader and innovator in the life insurance industry, taking policies to the Middle East for the first time.

Williams remains a prolific writer. He's written 7 books about his family's history and a detailed breakdown of the golf swing. A massive letter-writing campaign a few years ago led to hundreds of colleges, universities and high schools around the country to honor veterans before football games closest to Veterans Day. He also spearheaded a sportsmanship program that has made him a nationally respected advocate on the subject.

Golf has been a constant in his life as well. It gave Williams "the son I never had" in the most unexpected of ways years ago.

"I'm on the 16th hole on the Old Course at St. Andrews and an 11-year-old boy (snuck on and) asked if he could play in with me," he recalls. "He put it past me (off the tee). That caught my attention."

Williams struck up a friendship with the young lad, Stuart Syme, and became a supporter of local junior golf. The East Fife Sports Council honored Williams by naming the trophy for its junior golf tournament after him in 1991. Syme, who would grow up to become a Scottish golf pro, now has a son of his own, Connor, playing on the European Tour.

Back at home, Williams keeps swinging every Sunday, inspiring younger players who marvel at his consistency and fitness. I left Menlo CC with a new outlook on the game. It's not so much about score, where you play or even who you play with. Just enjoy the journey. You never know how long it will last.

I'm currently headed toward my 50th tour around the sun. I can't even fathom another 50 years with golf in my life. I probably won't tee it up with many people as interesting, successful and dedicated to golf as Williams, either.

"You meet so many wonderful people through golf," Walker said. "It bridges races, cultures and generations. You become friends because you have this crazy passion for this crazy game. People bare their soul that might be pretty guarded otherwise. When am I going to be friends with a 100 year old like I am with Bob? Golf is a gift in our lives." 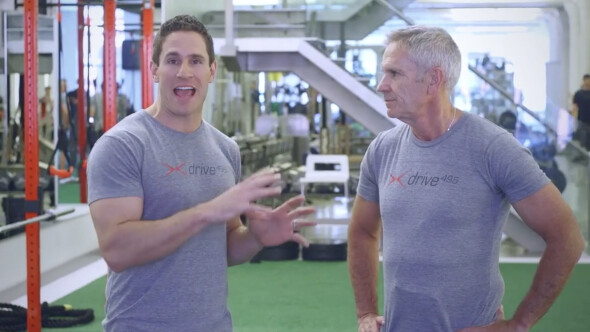 WATCH: Golf Fitness Over 50
Watch this comprehensive workout regimen by Don Saladino and his star 63-year-old pupil, Joel, who not only overcame knee replacement, but is playing the best golf of his life. This series is an absolute must for golfers over 50!

He out played his partners

1st off, my thanks and gratitude to Bob for serving our country. I have the greatest respect for our women and men who served or who are currently serving our county. Being my father was also a WWII veteran. I have a special gratitude for Bob and all those of the greatest generation! How true it is that the game of golf can and will provide an opportunity to meet total strangers, who after your round of golf you're glad to have met and spent the time with. And interesting enough age has no baring on being able to play with such fine individuals. Keep on hitting them straight Bob. You're an inspiration to more than you may know!

This is an inspiring article, especially for a 71 year old 1st year golfer. A passion for golf and a passion for life.

What an inspiring story.i am 69 yrs old now and now thinking that i still have a lot of golf left on me as long as i take good care of myself like him.thank you.