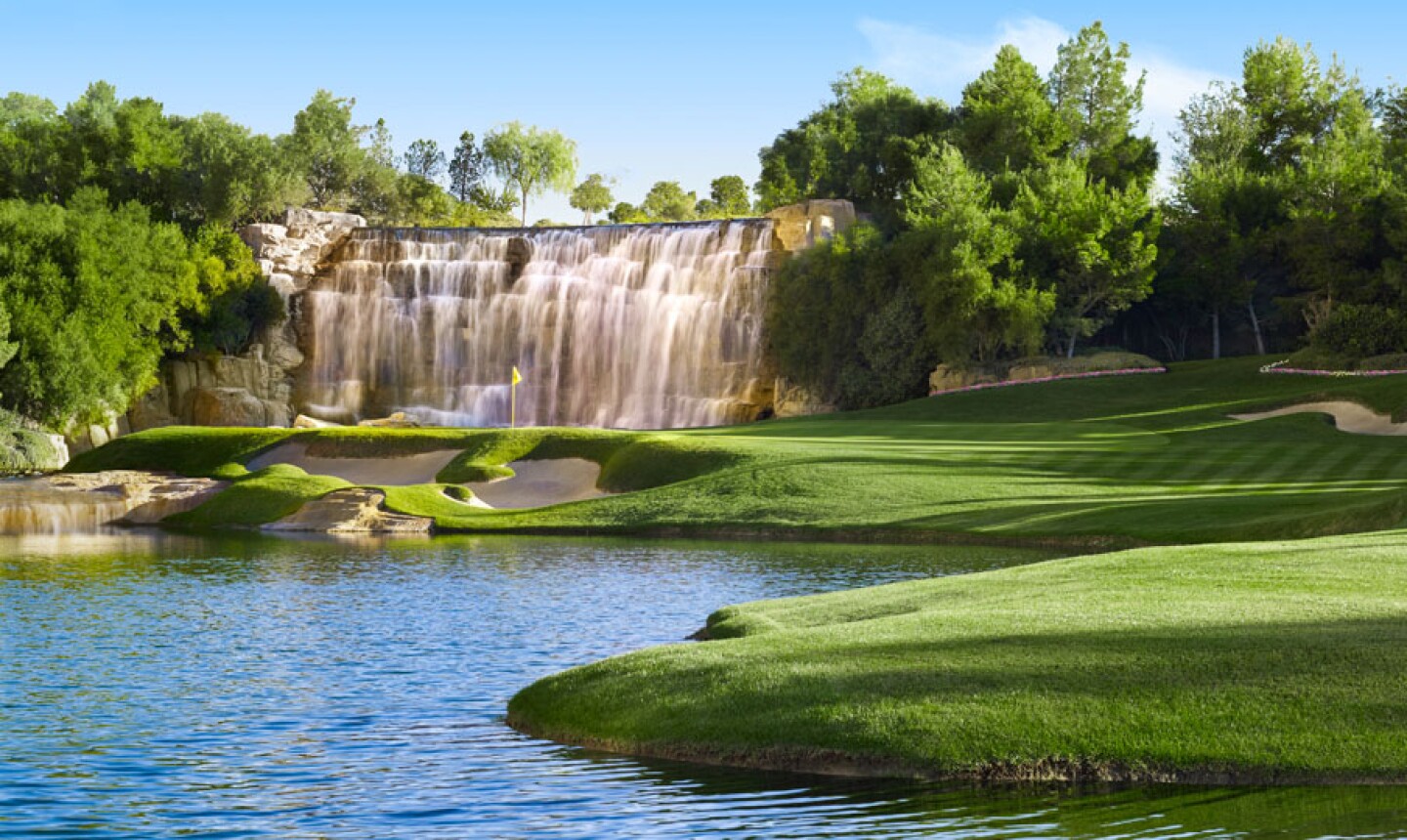 It had been whispered about for a while, but just the other day it became official.

Wynn Golf Club, right on the Strip in Las Vegas and one of the most expensive golf courses you can play, will be closing for good sometime in the next few months.

Gone will be the compact, 6,400-yard Tom Fazio-designed par-70 course in the shadow of the Wynn Las Vegas casino and hotel. Billionaire owner Steve Wynn and his company will be converting about half the acreage of the course into Paradise Park, a new resort amenity centered around a 20-plus-acre manmade lagoon, in which Wynn guests and visitors (for a fee) will swim, eat, drink, see and be seen. A new hotel tower and a quarter-million dollars in convention space is also planned for the site, at a total estimated cost of $1.5 billion.

Whereas the Wynn Golf Course has historically earned about $5 million per year, Paradise park could earn a hundred times that. So this move is not some heartless gesture toward golfers, or even an indicator of the game's troubles. It's just business, baby.

Wynn Golf Club is far from the only high-profile golf course closure to happen recently. Here are some other lost links of late:

This 36-hole complex, with its Sky and Shadow courses built as a unique collaboration between Pete Dye and Fred Couples, fulfilled the promise of its name when it shuttered in June 2016. However, there have been plans to revive the Sky Course and convert the Shadow layout into housing, though plans have not been finalized. If golf returns to Lost Canyons, here's hoping it's more player-friendly, as both original courses had reputations for being extremely difficult.

Ah, local politics. Ocean Breeze, a 27-hole layout that closed in mid-2016, cits at the center of some big plans the Greater Boca Raton Beach & Park District has. Earlier this year, the District agreed to pay Ocean Breeze owner Lennar Homes LLC $24 million for the defunct course and adjacent hotel structure. Likewise, it plans to rehab Ocean Breeze into a spiffy new municipal golf facility - at an estimated cost of $10 to $12 million - and sell its existing muni course for as much as $70 million to one of a few developers, who will then turn the property a few miles west of town into a housing development. But while plans to sell the muni are proceeding, the Ocean Breeze purchase isn't 100% final. Again I say: ah, local politics.

Located a few miles west of the city of Tyler, Twin Lakes went out of business at the end of July. The course was less than 20 years old, and was beloved of the locals for the quality of the layout and the relatively inexpensive green fees. It was a picturesque course, too, with a run of holes set around a lake. The owner, South African native and tree farmer Deon Dekkers, decided to put the land to other uses after tornadoes ravage part of the property earlier this year.

Following a rash of course closures in the early- and mid-2000s, it seemed the Myrtle Beach golf market had stabilized. But another group of closures has sprung up in the last four years. Wicked Stick Golf Links, a John Daly Signature Course, closed in September 2015 after about 20 years in business. It succeeded the demises of three other, older layouts: Cypress Bay Golf Club in North Myrtle Beach, Heron Point Golf Club in Murrells Inlet and the 27-hole Waterway Hills Golf Links, long known for the iconic tramway which conveyed golfers from the parking lot across the Intracoastal Waterway to the clubhouse for nearly a half-century. More recently, Island Green Golf Club, Black Bear Golf Club and Brierwood Golf Club have also shut their doors. The Grand Strand's southernmost course, Wedgefield Plantation, also closed recently, but in the last few weeks it was bought by a couple who intend to reopen it. Another course, Heather Glen Golf Links in Little River, may be redeveloped as early as early 2018.

Not all golf course closures are created equal, so one that occurs on a 21-square mile island, especially with a course designed by one of the great Golden Age architects - Devereux Emmet, in this case - really stings. The oldest 18-hole layout on the island, Riddells Bay closed about a year ago, though to date no new construction has taken place there. There remains some hope that the golf course may reopen at some point.

It's strange to contemplate the host of one of the longest-running professional golf tournaments potentially closing, but that's the dark cloud lingering over the Jack Nicklaus-designed Glen Abbey, which has hosted 29 of the last 41 playings of the Canadian Open. The course is located on prime real estate in the incredibly hot suburban Toronto market, and owner Clublink is eager to build as many as 3,200 residential units, commercial and retail space on the property. But just two weeks ago, the Oakville town council placed special status on the course under the Ontario Heritage Act, potentially saving it from redevelopment. But another appeal by Clublink will be made to the town in a few weeks, so the course may not yet be totally safe.

The strike-through is because this one's taken a positive turn. After course owners closed the course earlier this summer, homeowners in the surrounding community took them to court, ultimately earning a Temporary Restraining Order that dictated the course be maintained and reopened as soon as October 1. The more than 40 local homeowners who came to court for the hearing are confident the course will remain open for at least the next 30 years.

Heard about any other notable recent or near-future course closings? We'd love for you to share them with us and your fellow readers below.

Would you happen to know the name of the former golf course that closed several years ago that was located in North Myrtle Beach, S.C. where Ocean Keyes is currently located?

Probably would have been around 2nd Ave. north.

Not sure what you consider "recent," but Pecan Valley in San Antonio closed a few years back. Pecan was the site of the 1968 PGA where Arnie fell short in his attempt to complete what we now call the Career Slam.

I don't know whether Shadow Pines of Penfield NY, suburb of Rochester NY has made the list. It was one of the most well designed golf clubs in the area and rivaled the most well know Country Clubs in the area for playability. It had all the elements that the best in the country contain. It will be remembered as the best golf test available to everyone who ever visited Rochester.

They recently closed Marshallia Ranch Course in Lompoc, California due to water costs. Operated as part of Vandenberg Air Force Base, it was a spectacular 18-hole public course with many of its holes winding through towering stands of Eucalyptus. If you ever played it, you know that we lost a great course. It will be revived someday, but not until someone in the know figures out how to get the government to dig a water well on government land.

Andover Golf and CC in Lexington, Ky. Great course, but poor management. Open 27 years and never a dime spent on the principle. Bank took it over and closed it.

Hillcrest golf course in Hollywood, Florida. Really nice course with a great island green finishing hole. Closed for developers in the past year.

Shadow Lakes and Deer Ridge of Brentwood, CA are attempting to combine to make one course. Shadow Lakes has been closed since December. Awaiting city council and planning commission okays.

Tower Ridge in Simsbury, CT, a fine and quirky layout at the base of Avon Mountain, looks for all the world that it is dying -- literally and figuratively. Large burned out patches on fairways and greens and a pro shop stripped of much of its merchandise. The young guys in the clubhouse said things were improving but an earlier trip to tne course tells me the opposite. Sadly, looks like time for the embalming fluid.

Wynn closing.
Wynn has purchased land in vacant outlying area with plans to build a Spectacular new golf course, better then the Shadow Creek he built...and sold to MGM group.

A Good News Story. Devastated by a historic flood in 2013 the 36 hole iconic Kananaskis Golf Courses located in the Kananaskis mountain range, west of Calgary Alberta are scheduled to reopen in 2018. Originally designed by Robert Trent Jones Sr. in the late 1970's Kananaskis is a government owned facility and after much political hand wringing the funds to repair the flood damage were approved 2 years ago. Both are top 50 golf courses in Canada.