Pay for golf, not TV, at these great second-fiddle resort golf courses of the PGA Tour 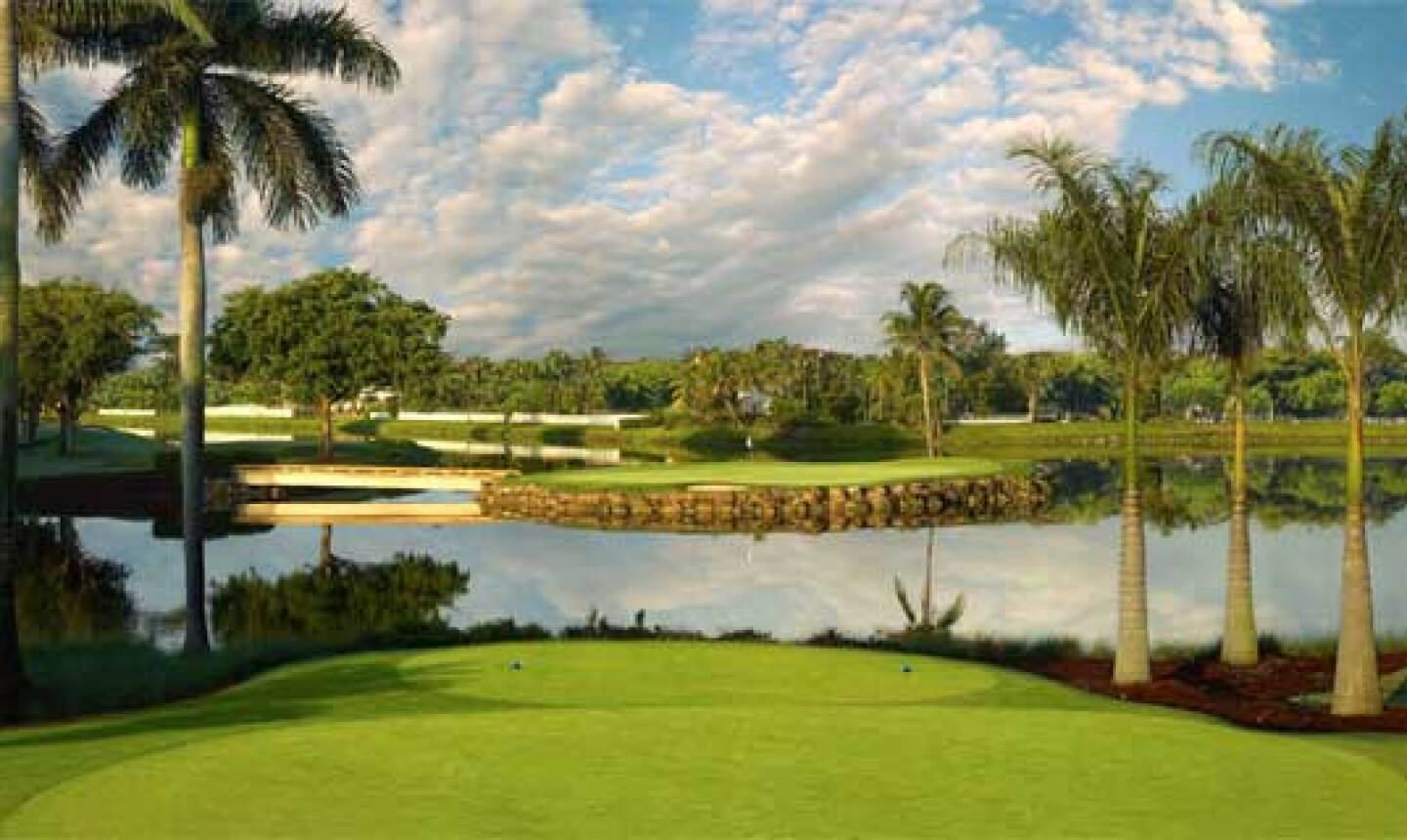 The newest course at Doral is the Jim McLean Signature Course, built to be as challenging as any course in Florida. Courtesy of Doral 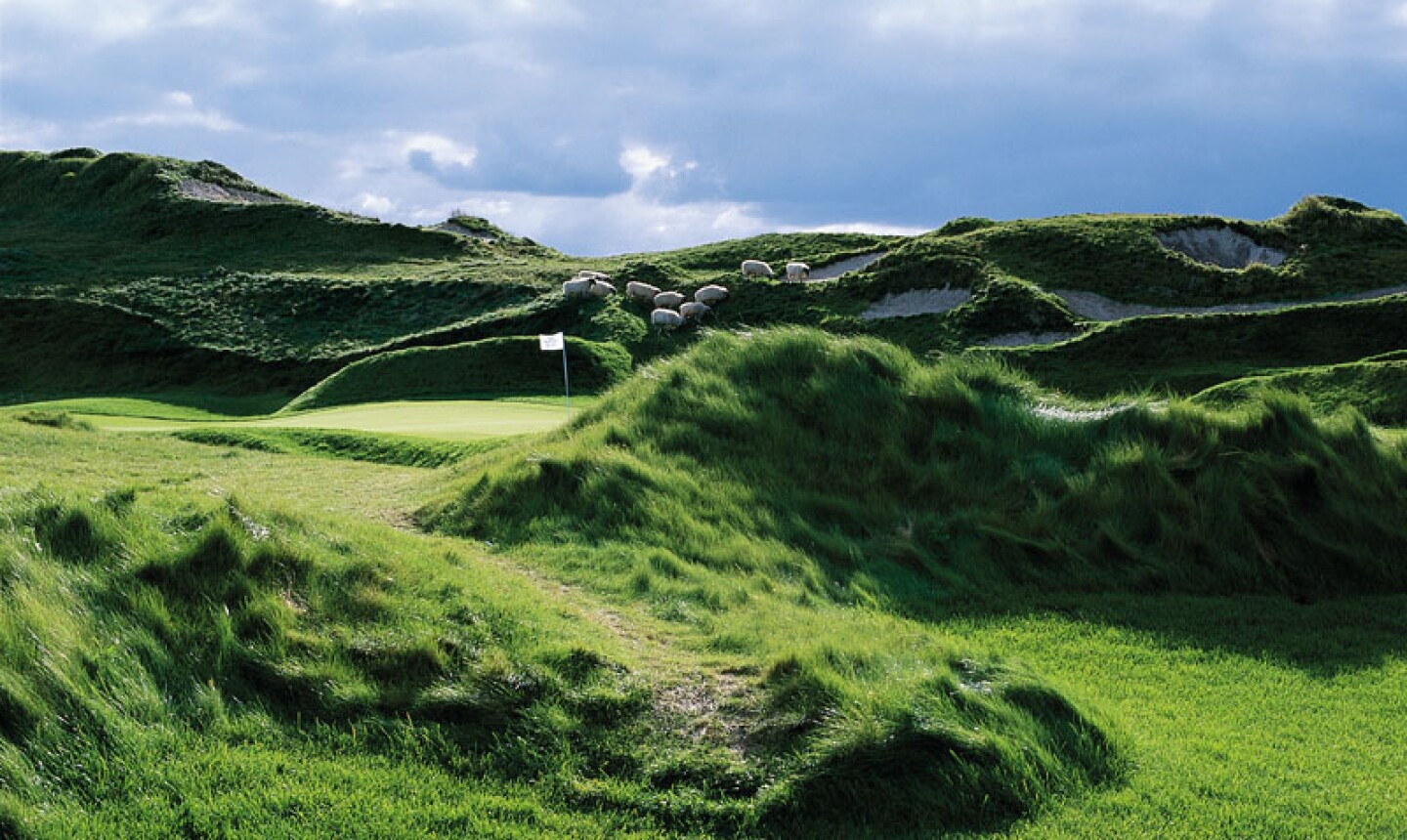 Whistling Straits' Irish Course is just as rough and tumble as the Straits Course. Courtesy of Kohler 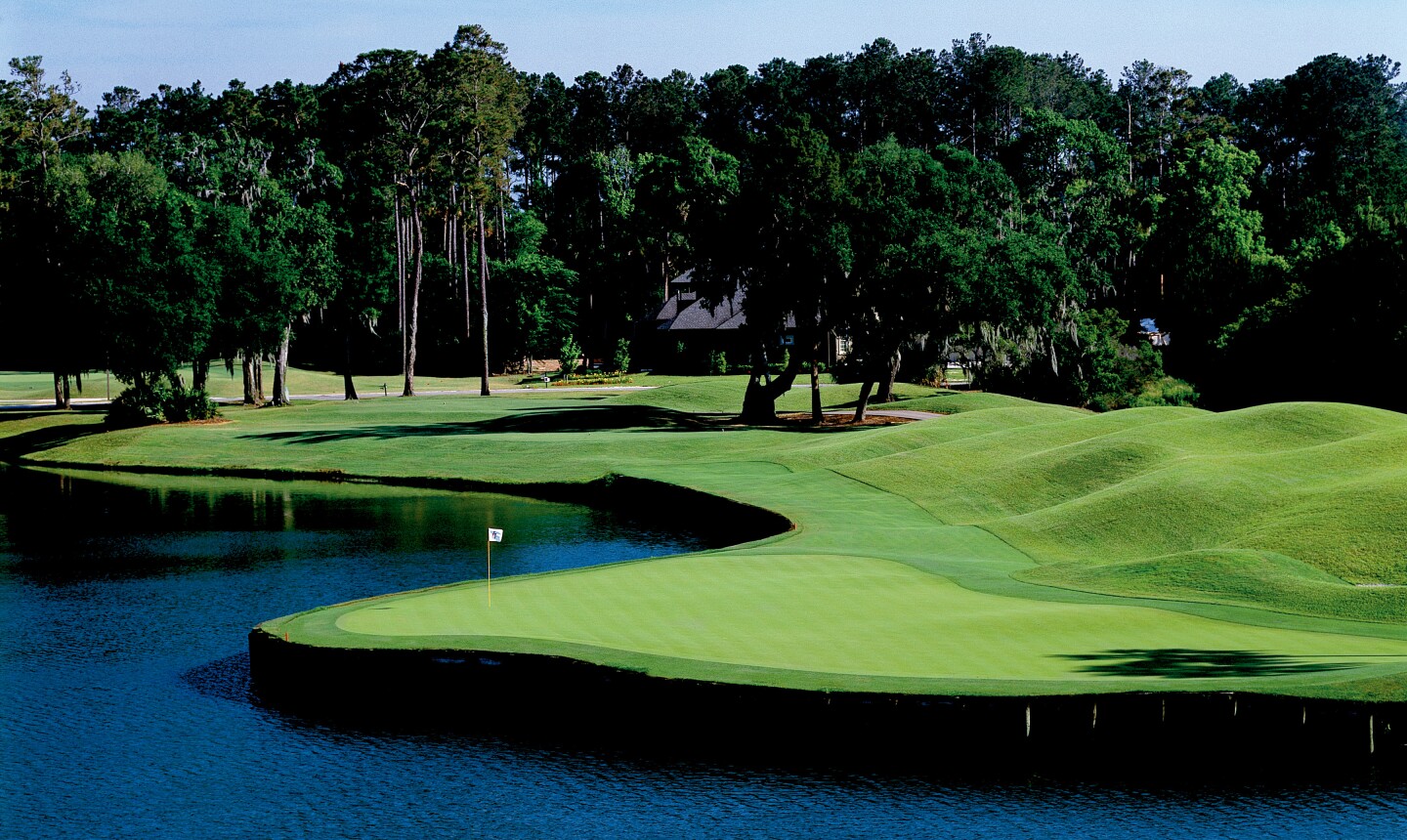 The Valley course at TPC Sawgrass features championship Pete Dye design at half the cost of the Stadium. Dick Durrance/Getty Images 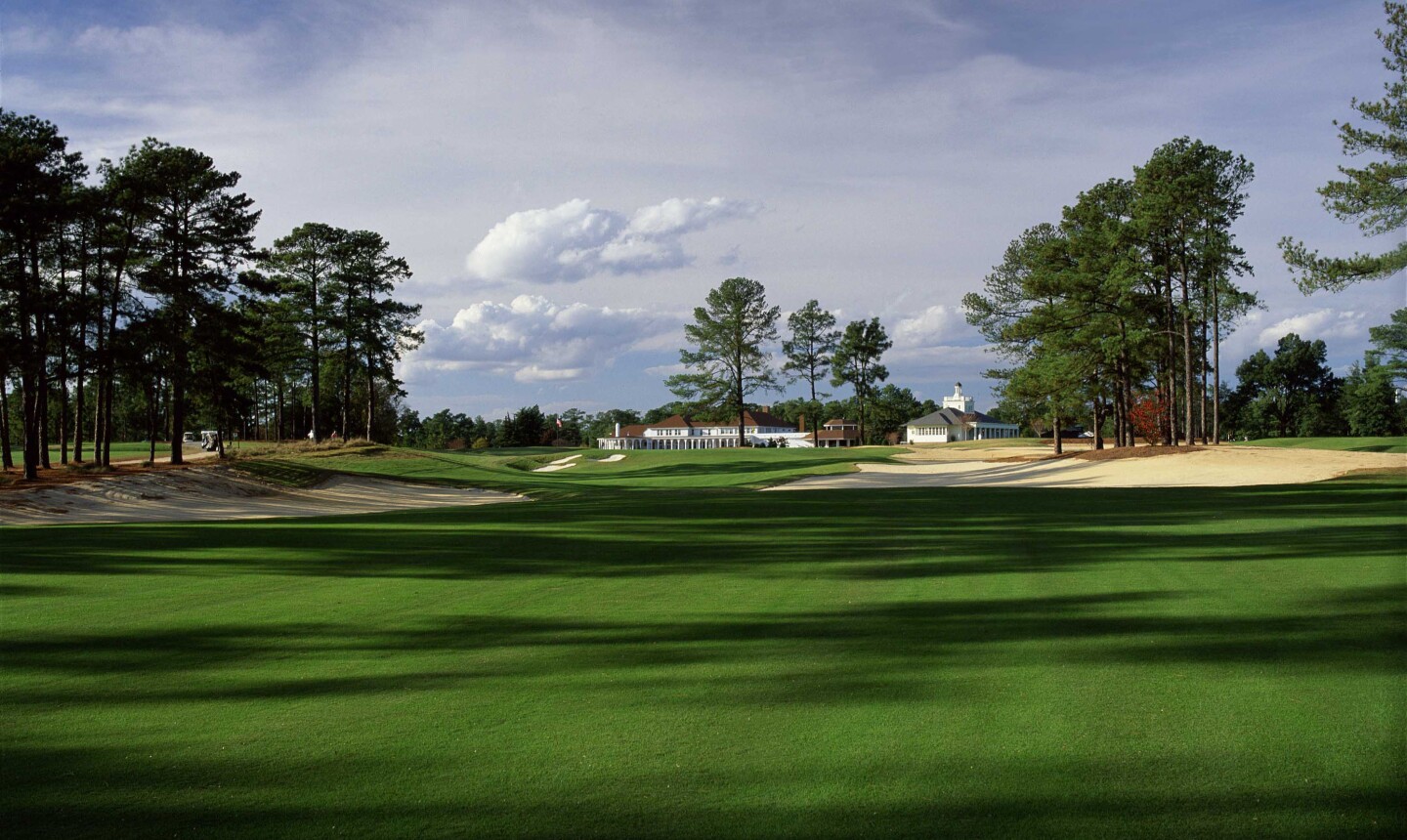 The par-4 18th hole at Pinehurst No. 4 plays uphill towards the clubhouse and is 456 yards from the back set of tees. Courtesy of Pinehurst Resort

When planning your golf vacation, most resort destinations that host a PGA Tour stop have more than one option. If you can't make it to the main golf course, try one of the resort's sister courses, such as Irish Course at Whistling Straits or TPC Sawgrass's Valley Course.

We're all guilty of checklists and bucket lists. With the hosting of a televised professional golf event comes demand from weekend hacks wanting to play the same shots they saw on TV.

And for the pleasure, a few extra bucks are usually padded onto the green fee.

The pros visit many multi-course golf resorts during the season, and as a result, the host course always ends up being the must-play for everyone, scratch to 36-handicap.

But that doesn't mean the resort's other options are clunkers. In most cases, they're held to the same condition standards (and sometimes even better shape due to less traffic) and are easier and cheaper to score a tee time.

You don't have to win any tour prize money to afford these worthy courses that play next door to PGA Tour stops.

The Irish course at Whistling Straits in Sheboygan, Wisconsin

Sitting right next door to PGA Championship and future Ryder Cup host the Straits course, the Irish Course at Whistling Straits still boasts Lake Michigan views from many points, and the dunes are just as rough and tumble here as its neighbor. Rest assured you'll still have plenty of shots out of pot bunkers, fescue and dunes as the Straits, though fairways are generally a little more forgiving.

The deal: The Straits asks $340, while the Irish asks $170 with no mandatory caddie but is still walking only. And it offers one of the great deals in the golf universe: With select golf packages through Kohler's Inn at Woodlake or American Club, free P.M. replays are offered on the Irish when you play the Straits or Blackwolf Run Golf Course (18 holes are closed at Blackwolf for the 2010 season and the current layout is nine holes from the River Course and Meadow Valleys Course).

You won't find the high drama on the famous island green 17th at the TPC Sawgrass Valley Course.

But while the championship yardage stays less than 6,900 yards, you do get Pete Dye's design pedigree (with water on every hole) and TPC-worthy conditions with a slope/rating still formidable. And, yes, it plays out of the same clubhouse as the PGA Tour boys.

The deal: Peak season rack rate on the Valley is $195 compared to $375 on TPC Sawgrass' Players Stadium course.

The Links at Spanish Bay in Pebble Beach, California

Bucket list stalwart Pebble Beach Golf Links has a collection of holes that are among the best in golf, including the oceanfront seventh and 18th. But the Links at Spanish Bay's collective 18 holes, designed in part by Tom "Mr. Links" Watson, are considered by some to be more consistent in style; and on some days, it's deserted while Pebble is packed, making for a better experience if you like to play "ready golf."

The deal: We're all well versed in Pebble's sticker shock. It runs more than a cool grand once you factor in mandatory accommodations at the Pebble Beach Lodge. Spanish Bay isn't exactly cheap at $260, but that's still almost half off Pebble's $495 rack rate and $80 cheaper than Spyglass Hill Golf Course, too.

It's tough finding any real bargains when you're in coveted Scottsdale during peak season, but you can still get TPC-worthy golf at the TPC Scottsdale Champions course for a sliver of the TPC Scottsdale Stadium price. The Champions was recently renovated (to the tune of $12 million) and maxes out more than 7,100 yards, with conditions worthy of its Scottsdale zip code.

Pinehurst No. 4 at Pinehurst Resort in North Carolina

Pinehurst No. 4 is a modern, Tom Fazio design built on an old Ross routing next to U.S. Open host Pinehurst No. 2, and some will argue it's a better play for the tastes of the resort golfer. No. 4 certainly has more visual eye candy and roll to the land (even if much of this is bulldozer-made), as do most Fazio signatures. If you don't take much stock in playing historic, major championship courses, No. 4 may be better suited to you and is cheaper to boot.

More second-fiddle, golf courses you can save money on

Osprey Point at Kiawah Island Resort in South Carolina: Kiawah Island, S.C. is a natural wonderland and more than just oceanfront scenery. Fazio's Osprey Point course plays through spectacular marsh land, and once Dye shreds your confidence on the sinister Ocean course at Kiawah, Fazio lightens it up a bit here with some more player-friendly holes.

Ocean at Sea Pines Resort in Hilton Head Island, South Carolina: If you don't have the cash for Harbour Town Golf Links, save big at the Ocean Course, the oldest island course that was redesigned and renovated in 1995 and serves up an ocean hole for your trouble at the 15th.

Jim McLean Signature Course at Doral Resort in Miami: The brand new course built by the man who has called Doral home for years, McLean knows south Florida golf. Don't think his course is a breeze compared to the TPC Blue Monster at Doral; it's built to be mean, too. 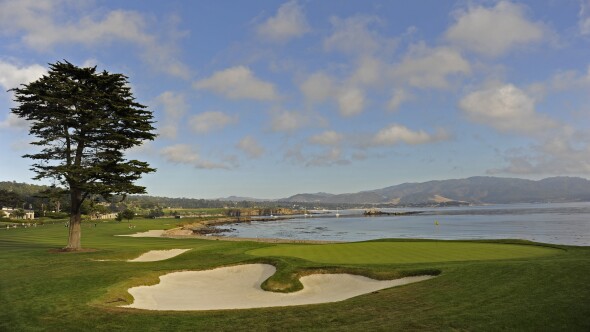 Articles
5 Min Read
This is major: The seven current U.S. Open and PGA Championship rota courses you can play
Major championship golf venues in the United States are more accessible than ever. No, Augusta National isn't going public, but you can play many recent and upcoming U.S. Open and PGA Championship host courses - as long as you know how to get a tee time, and can afford it. Brandon Tucker offers a bucket list of big-time courses for which you don't need a membership to play. 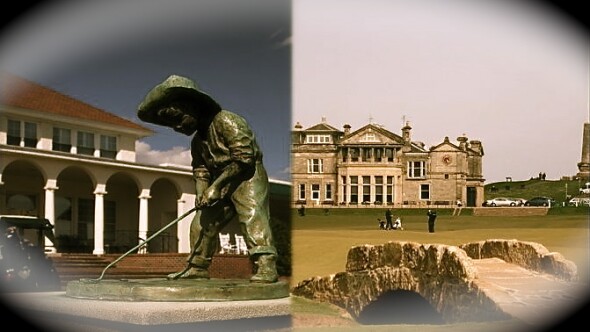 Articles
4 Min Read
St. Andrews vs. Pinehurst: How America's 'home of golf' stacks up
The link between St. Andrews and Pinehurst is strong, beginning with Donald Ross, who came to Pinehurst in 1900 after studying under Old Tom Morris in St. Andrews, and stayed until his death in 1948. The two spots are both among the game's most coveted destinations for the majors they host, and their pure golf atmosphere is impossible to duplicate. It's a friendly rivalry, of course, but it's time for a showdown: Scotland's "Home of Golf" vs. the United States' most worthy contender. 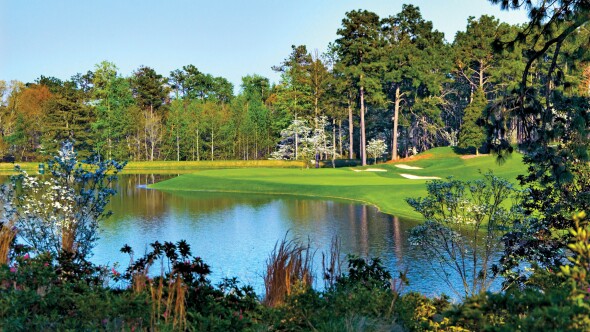 Articles
3 Min Read
At a glance: The eight golf courses at Pinehurst Resort
The North Carolina Sandhills are golfing country, anchored by the Pinehurst Resort, home to eight courses built between 1897 and 2004. Few visitors have time to play them all on one trip, especially if you plan on tackling some off-property courses like Pine Needles or Tobacco Road G.C., so we've compiled a briefing on each to help you decide which to include in your itinerary. 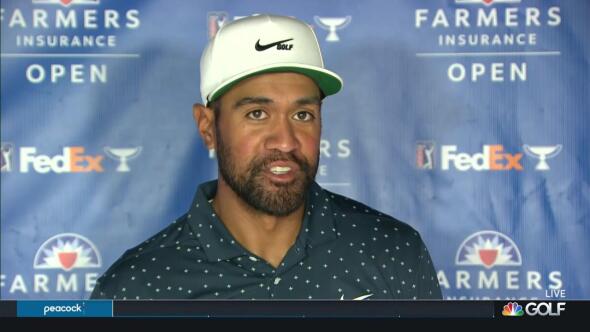 Kira K. Dixon
Lifestyle Correspondent
Now Reading
Pay for golf, not TV, at these great second-fiddle resort golf courses of the PGA Tour
New Cookie Policy
WE AND OUR PARTNERS USE COOKIES ON THIS SITE TO IMPROVE OUR SERVICE, PERFORM ANALYTICS, PERSONALIZE ADVERTISING, MEASURE ADVERTISING PERFORMANCE, AND REMEMBER WEBSITE PREFERENCES. BY USING THE SITE, YOU CONSENT TO THESE COOKIES. FOR MORE INFORMATION ON COOKIES INCLUDING HOW TO MANAGE YOUR CONSENT VISIT OUR COOKIE POLICY.
CONTINUE
Search Near Me