Considering the famed resort on California's Monterey Peninsula spent millions the previous five years getting ready for such an important milestone - building the Pebble Beach Golf Academy (2014), Fairway One at the Lodge (2017) and Pebble Beach Visitor Center (2018) - it's no surprise that a bump in green fees is coming, too.

Starting April 1, a round at Pebble Beach Golf Links will cost $575 for resort guests, an increase of $50 since January 2019. In the realm of American public/resort golf, only Shadow Creek near Las Vegas costs more ($750). Spyglass Hill will also jump from $395 to $415 and the Links at Spanish Bay from $290 to $295. Del Monte's cost remains the same ($110 plus cart). It's still to be determined what the new Peter Hay par-3 course will charge when Tiger Woods finishes a redesign this fall.

John Sawin, the resort's Vice President & Director of Golf, told me prior to the 2019 U.S. Open that a round at Pebble Beach might be "under-priced." Pebble Beach's green fees originally jumped from $525 to $550 immediately following the resort's sixth U.S. Open last June.

"Being a business person, this is the most fascinating thing to study, because the demand is almost perfectly maxed," he said at U.S. Open media day. "Every basic principle of economics says we are under-priced, but there is a certain amount of goodwill that goes into it. Being open to the public is certainly something. We don’t want to price everybody out. We held the rate flat for 10 years. It stayed under $500 at $495. And then we go to the $500s. If you look at the way that rate has moved in the last 12 years, it is about a one percent average growth rate per year."

Sawin mentioned that labor and water costs are going up faster than green fees. "It’s expensive," he admitted, "but we still want people to be able to afford it for that premium golf experience. When you run 100 percent occupancy for the whole year, you would say we are under-priced." 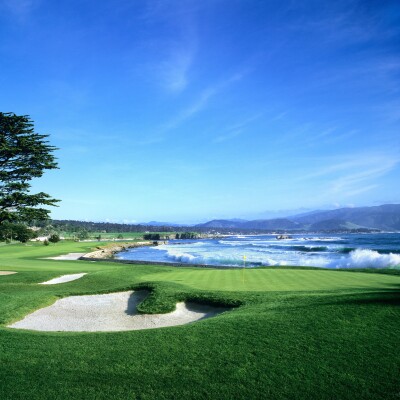 Guaranteeing an advanced Pebble Beach tee time requires a stay at either The Lodge at Pebble Beach ($940 and up) or the Inn at Spanish Bay ($820 and up). Golfers who aren't resort guests can attempt to make a tee time 24 hours in advance by phone or walk-up that morning. Those $575 tee times will include a $45 cart fee surcharge for players who want to ride. Caddies, which aren't required, cost an additional $95 per bag for a double loop or $145 for a single bag (plus tips) for guests or non-guests alike.

I'm often asked if playing Pebble Beach is worth the money. I always say "Yes." No place in the world delivers the full package of scenery, history and service like Pebble Beach. My advice remains the same: Play it now rather than later. With a 2023 U.S. Women's Open and 2027 U.S. Open on tap (coupled with inflation), it's inevitable that the green fees eventually rise again.

Is $575 too expensive for a round of golf, even at Pebble Beach? Let us know in the comments below.

Jason Scott Deegan
Jason Scott Deegan has reviewed and photographed more than 1,000 courses and written about golf destinations in 20 countries for some of the industry's biggest publications. His work has been honored by the Golf Writer's Association of America and the Michigan Press Association. Follow him on Instagram at @jasondeegangolfpass and Twitter at @WorldGolfer.
14 Comments

Finally played Pebble and it was well worth it. Called the day before, they had a decent choice of times still available. Spent the night in Carmel, $180. Everything about the course was magic and I can't wait to go back. A must for anyone who appreciates the views and history of the course. If your'e the bitching and whining every shot type of golfer, i'd suggest skipping it!

My college roommate and I couldn't afford to play PB, but we didn't let that stop us. We went out on a rainy morning to just putt on the practice green. We noticed that there wasn't many groups on the course, so we just walked over to the first tee and teed off. Nobody stopped us. Later in the day, the sun came out and we had a blast. It's probably more difficult to sneak onto Pebble nowadays, but that was a great day of golf.

Fortunately, I was able to play Pebble Beach when it was only $295 and I was still single, I had a great time and it was a guilty pleasure I could justify. The current fees are out of my price range but it’s a supply and demand thing I’m really glad I had my chance to play there and I cherish the 3 birdies I made and smile when the pros struggle on 8,9 and 10 like I did...

Every post says no it’s too much money.....I believe it’s way overpriced but it’s the mana there that’s under the under illusion that we the golfer have set the price because there fully booked for the year so yea they could charge more so play now what a bargain 600$ for 5 hour round awesome I wish I could afford it

That is way too expensive for me. I'd rather spend the money for a weekend in Pebble Beach on a trip to Scotland or Ireland where I can pay $1300 (SEA>LHR>EDI or SEA>DUB) round trip then spend about $500 on golf and $500 on lodging and get 4 or 5 rounds in.

Beautiful piece of property, but can't imagine I'll ever pay that much to play golf.

You asked "Is $575 too expensive for a round of golf, even at Pebble Beach?" For me - yes. Without a doubt one of the most beautiful areas in the world and I have dreamed for decades of playing there one day with my son but it will not be. The "round" would probably cost at least $3,000 just for me when you consider green fee, cart/caddie, flight, lodging, meals, and incidentals. I am a 72 year old retiree who plays public golf in the Nashville TN area. About 95% of my 60 - 75 rounds annually are played during the weekday. Public rates around here are generally in the $25-40 range (weekday senior w/cart) with a couple in the $60 - $75 range so I spend about $2,000 annually. In addition, I typically take one "buddies trip" that costs about $1,200 - $1,800 all in. In other words one round at Pebble is almost one year of golf for me. One of our local courses (Greystone) is a Golf Advisor top 25 US public course with a $32 senior weekday rate and can be played 100 times for what it costs me to play one round at Pebble. I'll play local unless I hit the lottery.

My father at 73years old has dreamed of playing for 50years. This year, were playing in the Father and Son. Dreams come true.

The price tag is well beyond our means but it's a moment that will go well beyond just a round of golf.

Otherwise I would never have made the trip to play. If I were on business in the area I would not pay the amount to play.

It is a difficult question. It is obnoxiously expensive to stay and play. The market determines the fare but what market is that? As we want golf to be accessible to the majority of its fans Pebble has made it out of reach.

You ask: Is this too much.
YES. In terms of what I would ever be willing to pay (even though I can). There are innumerable golf experiences as good or better, for much less. Their defense of this - that their costs are rising faster than their greens fees, is laughable, given that all courses in the US (100,000?) except one are cheaper. I would respect them much more if they had said “It’s economic. It’s what the public will pay, so we charge it. And - setting the fee at this level ensures that those who are willing to pay (and we can fill the course), won’t have too much competition for tee times. It keeps the riff-raff from clogging up our tee sheet”

That would have been honest, and at least respectable.

I am not angry at them, its their course, and - yeah - thats what the traffic will bear. I have played it about 10 times, and I will never again, and I don’t think of it as a loss. There are a lot of rich people out there who can’t lay golf doing their vanity rounds. 5+ hour rounds. There are many places I would rather play. For a LOT less

Have played all three courses. Enjoyed it. But, no way worth the stupid expensive price. Golf for me is a nice course and playing with great friends. I can do that on many wonderful course s throughout Northern California at 1/5 the cost. I’m born and raised San Franciscan so maybe that’s why I haven’t fallen for the tourist trap that is Pebble Beach properties. It’s pretentious as hell and a major ripoff!

I was there with a group in 2009. We did not book enough tee times to cover the size of the group early in the day. Those of us that teed off later still had to pay the full green fee despite the fact that we would get to play no more than 14 holes. Shame on management for charging us for 18 holes knowing full well we would not be able to complete the round!