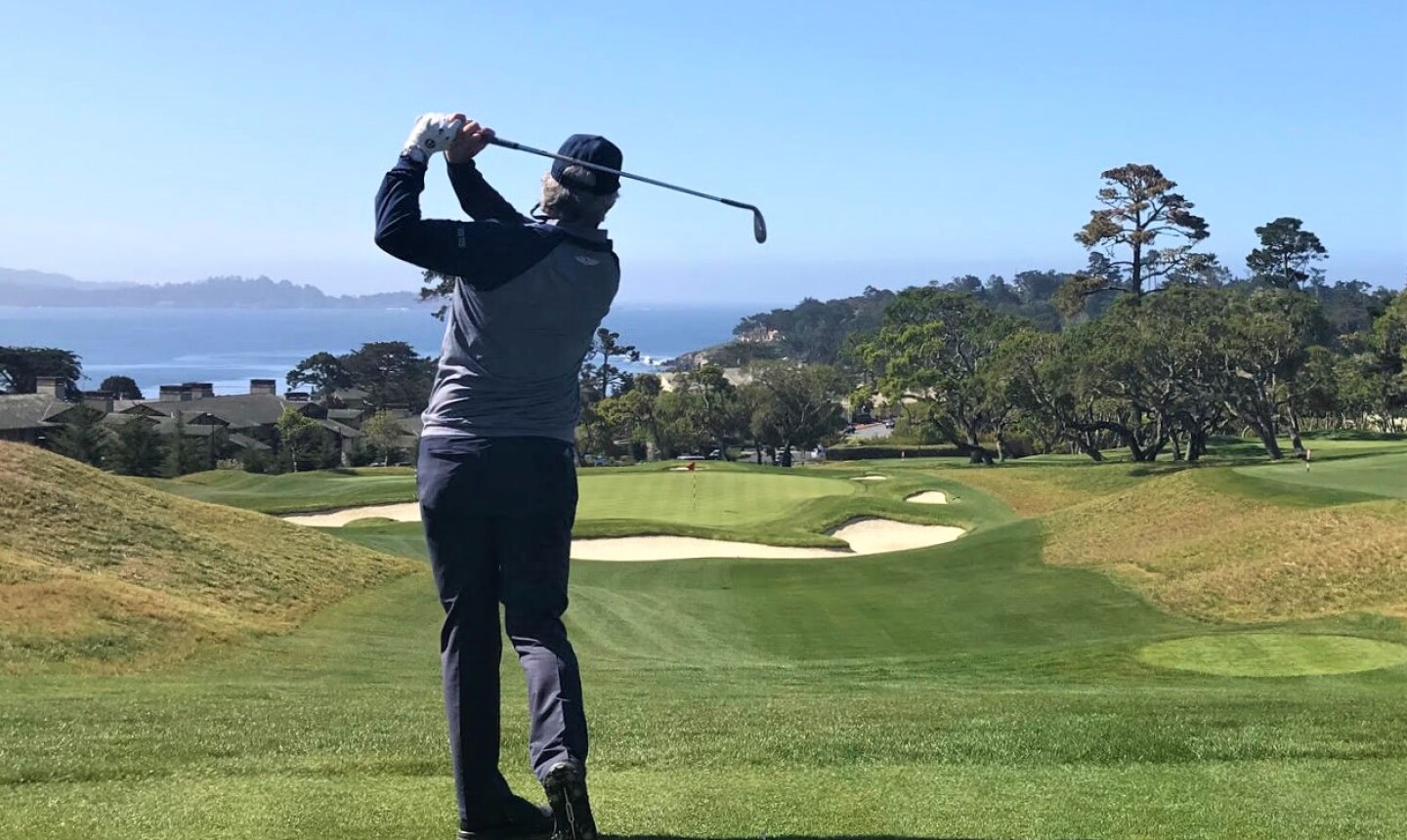 Laird Small, the master instructor at the Pebble Beach Golf Academy, hits one of the ceremonial tee shots on The Hay. Jason Scott Deegan/GolfPass 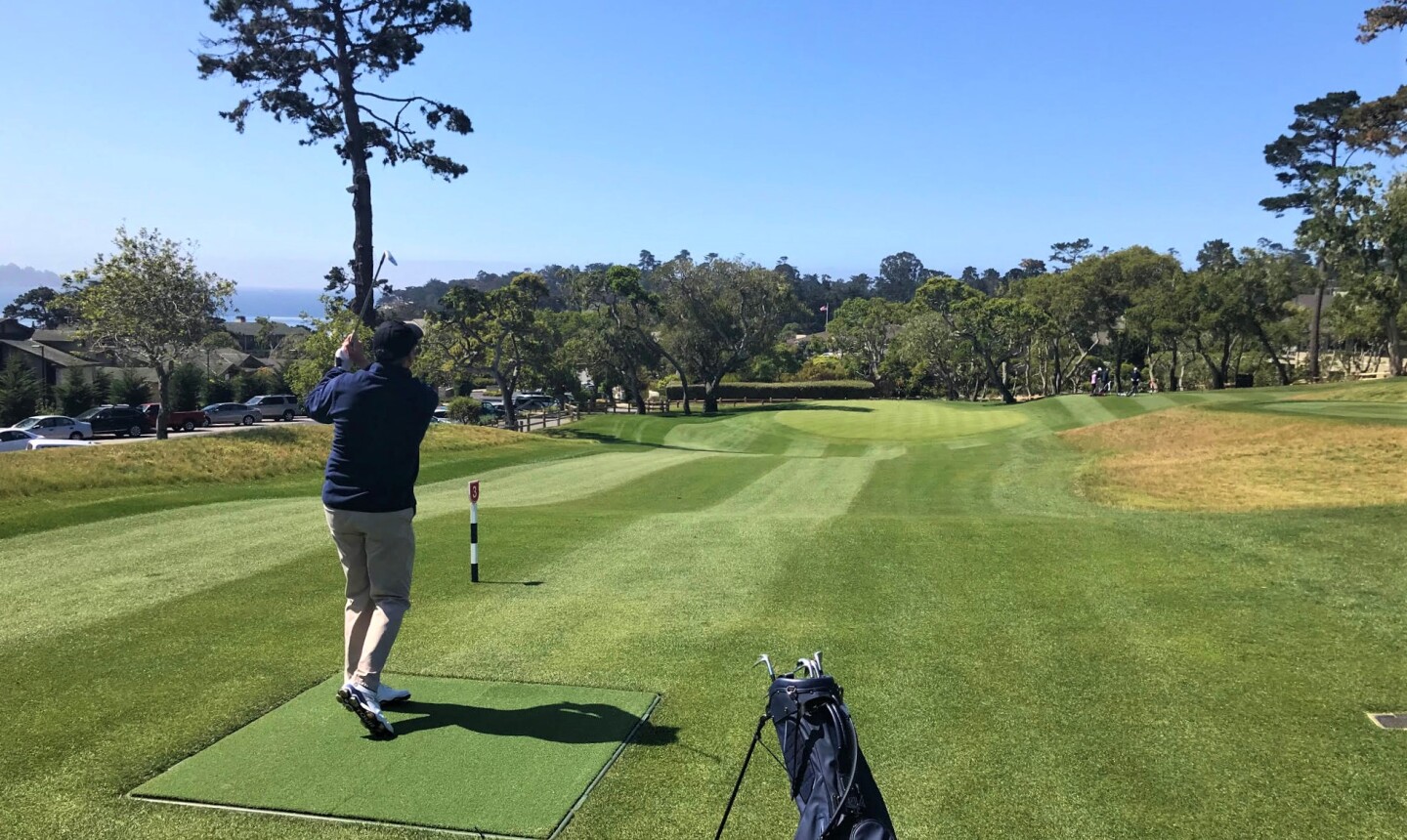 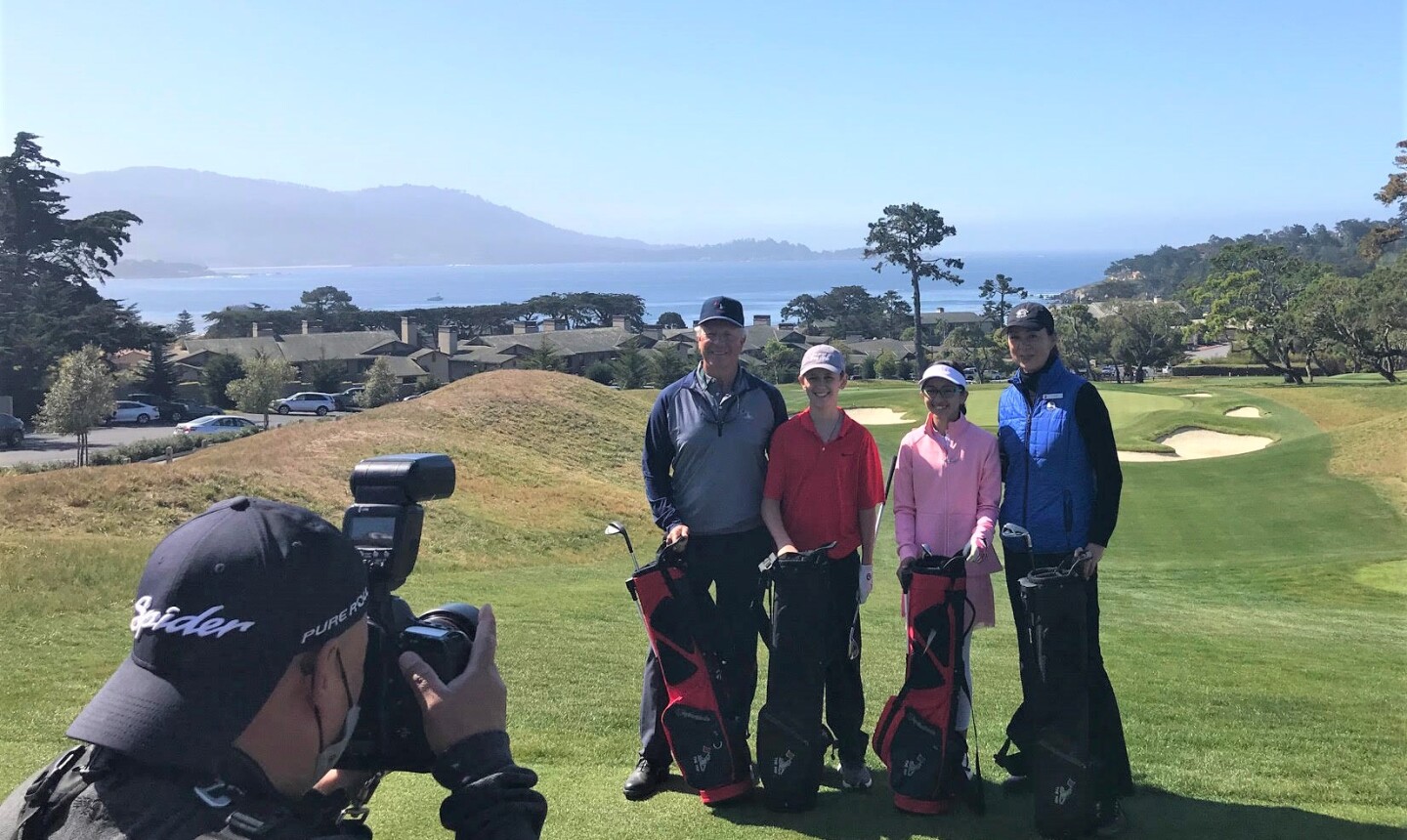 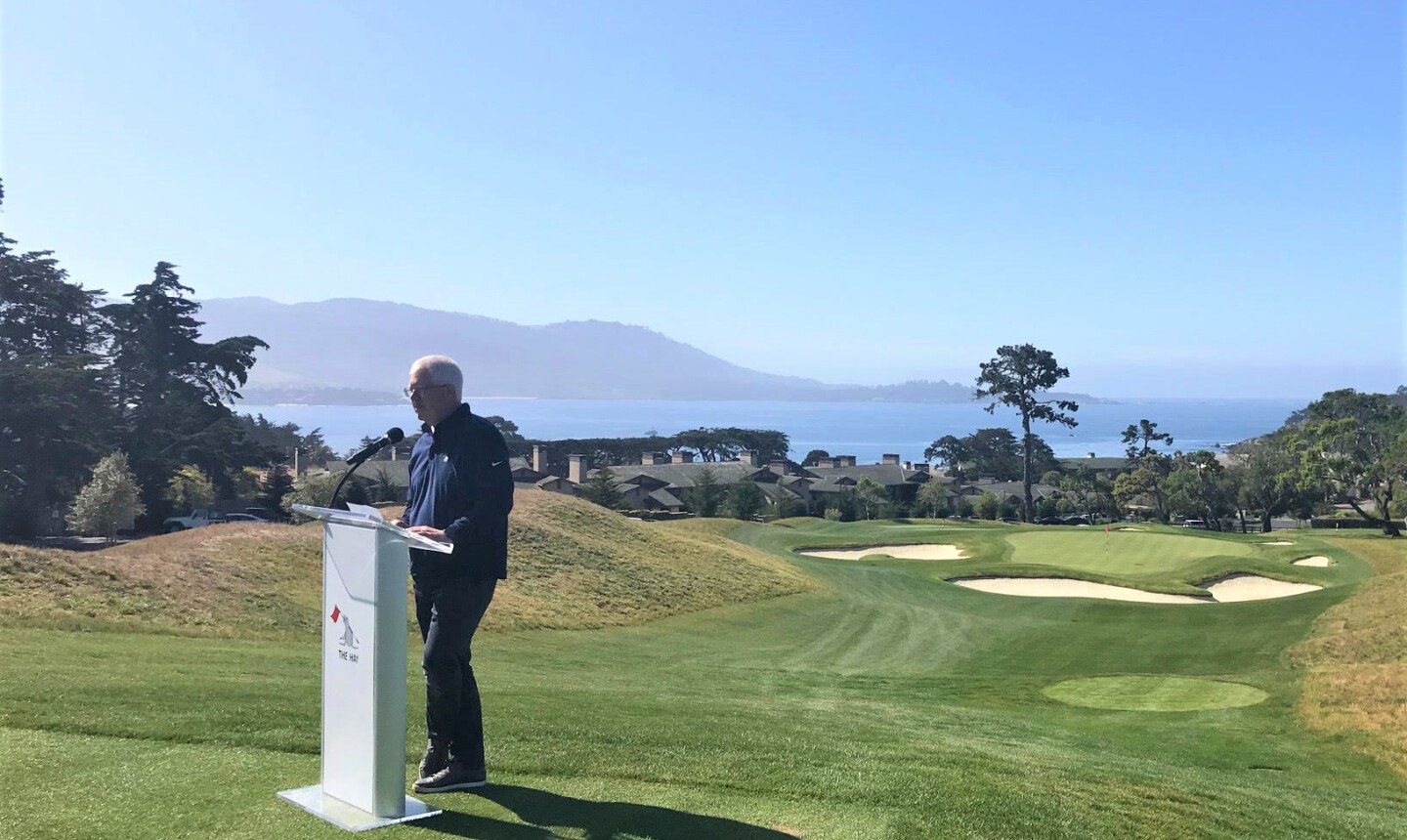 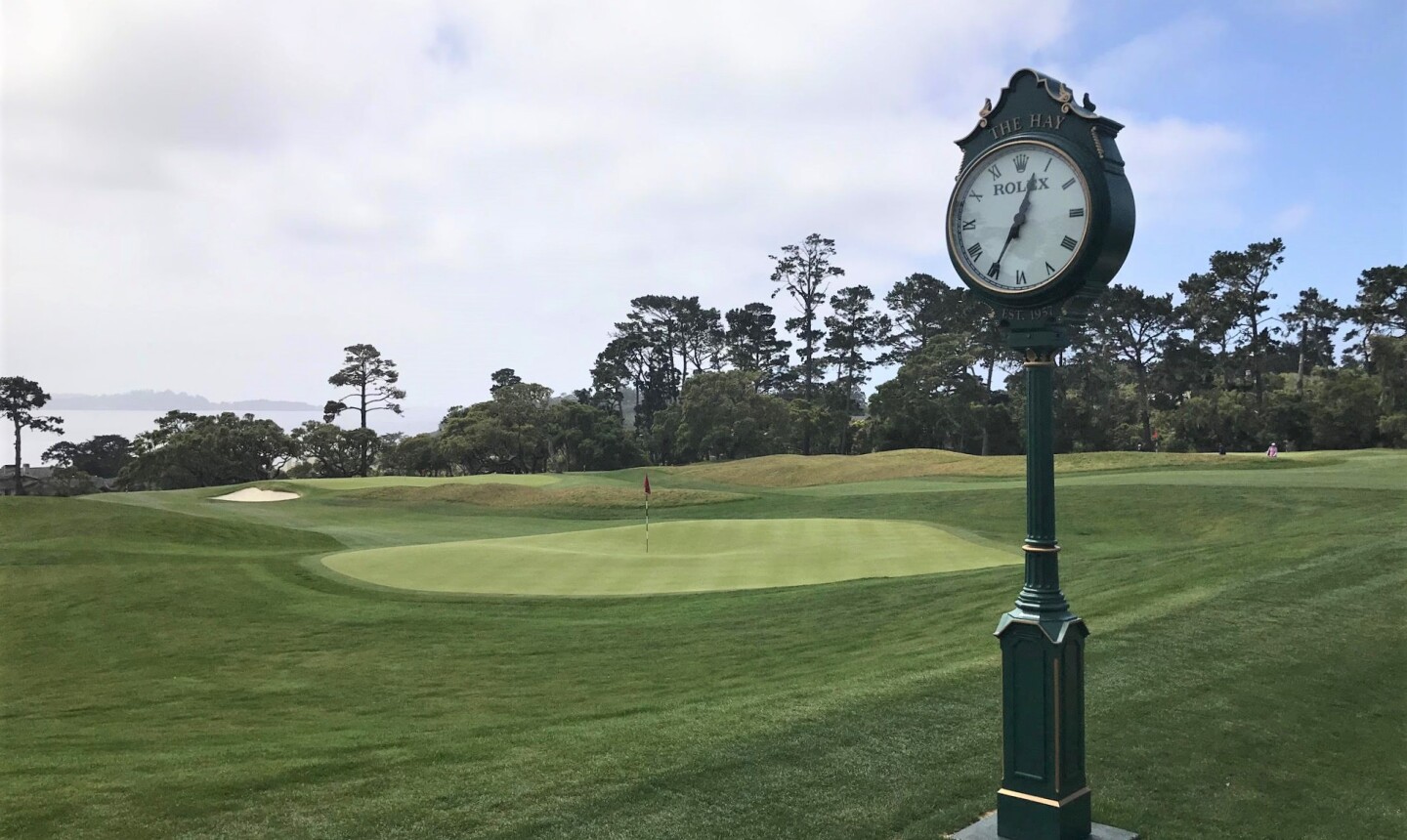 A clock greets golfers near the first tee at The Hay. Jason Scott Deegan/GolfPass 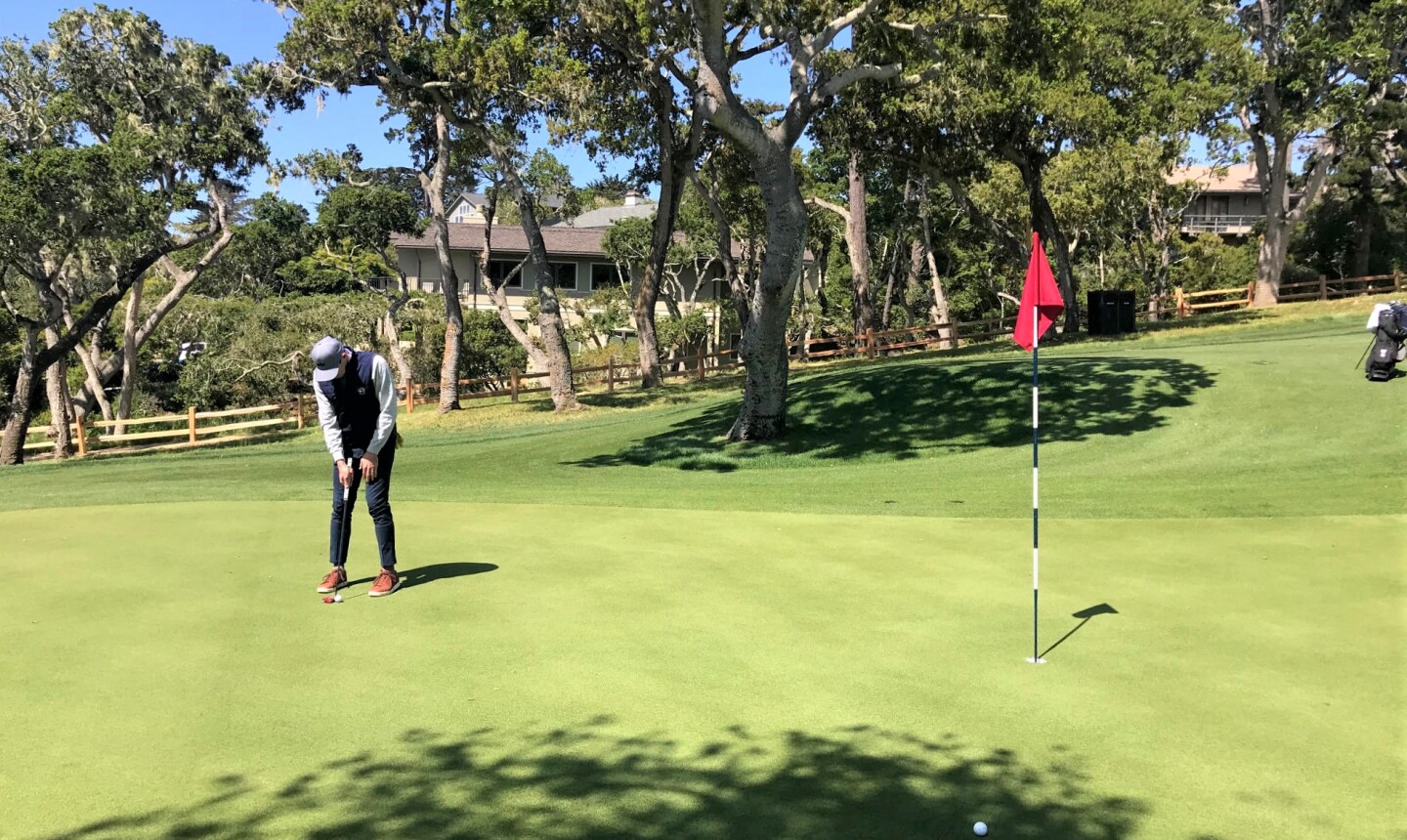 A golfer lines up a putt on the tricky new greens at The Hay. Jason Scott Deegan/GolfPass 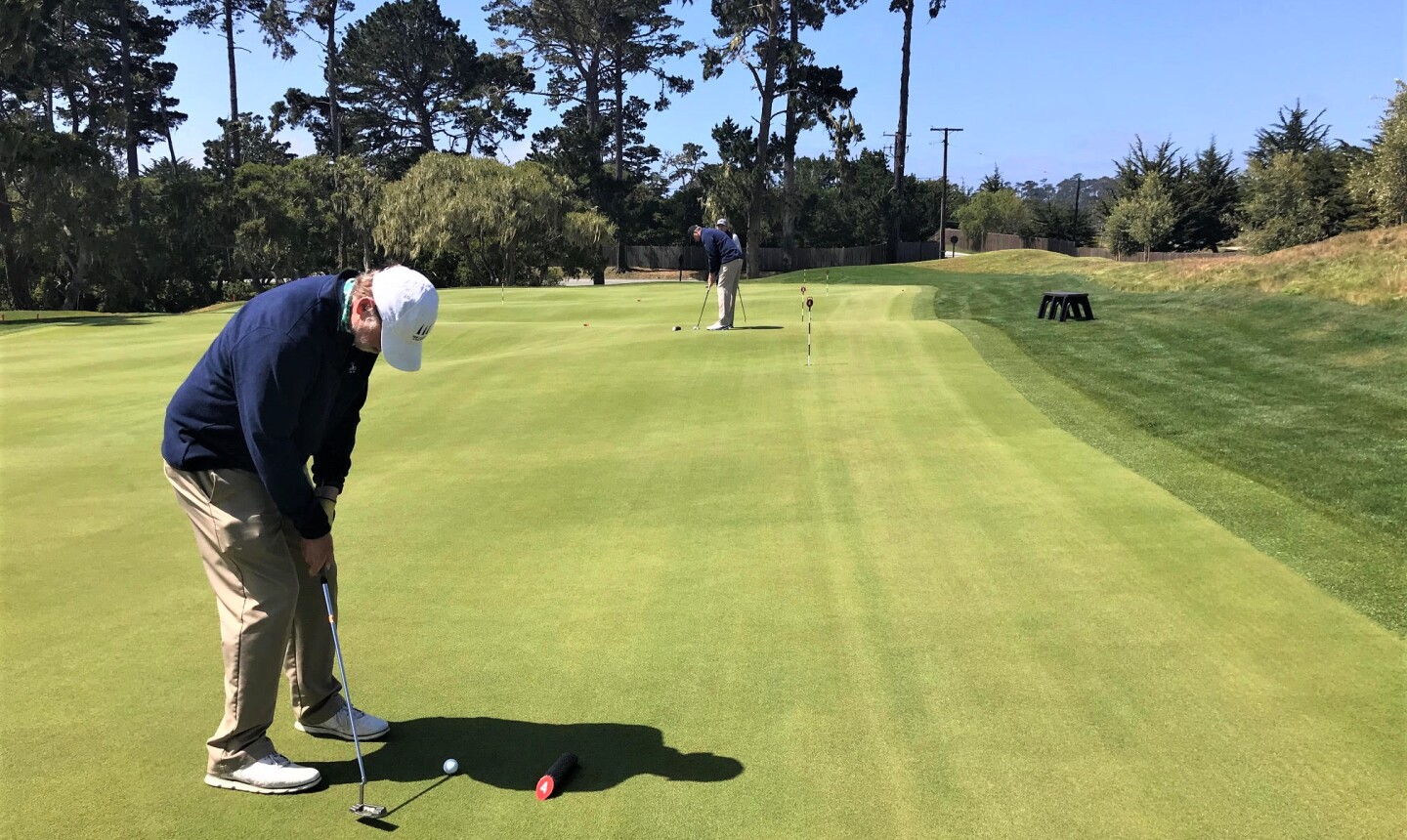 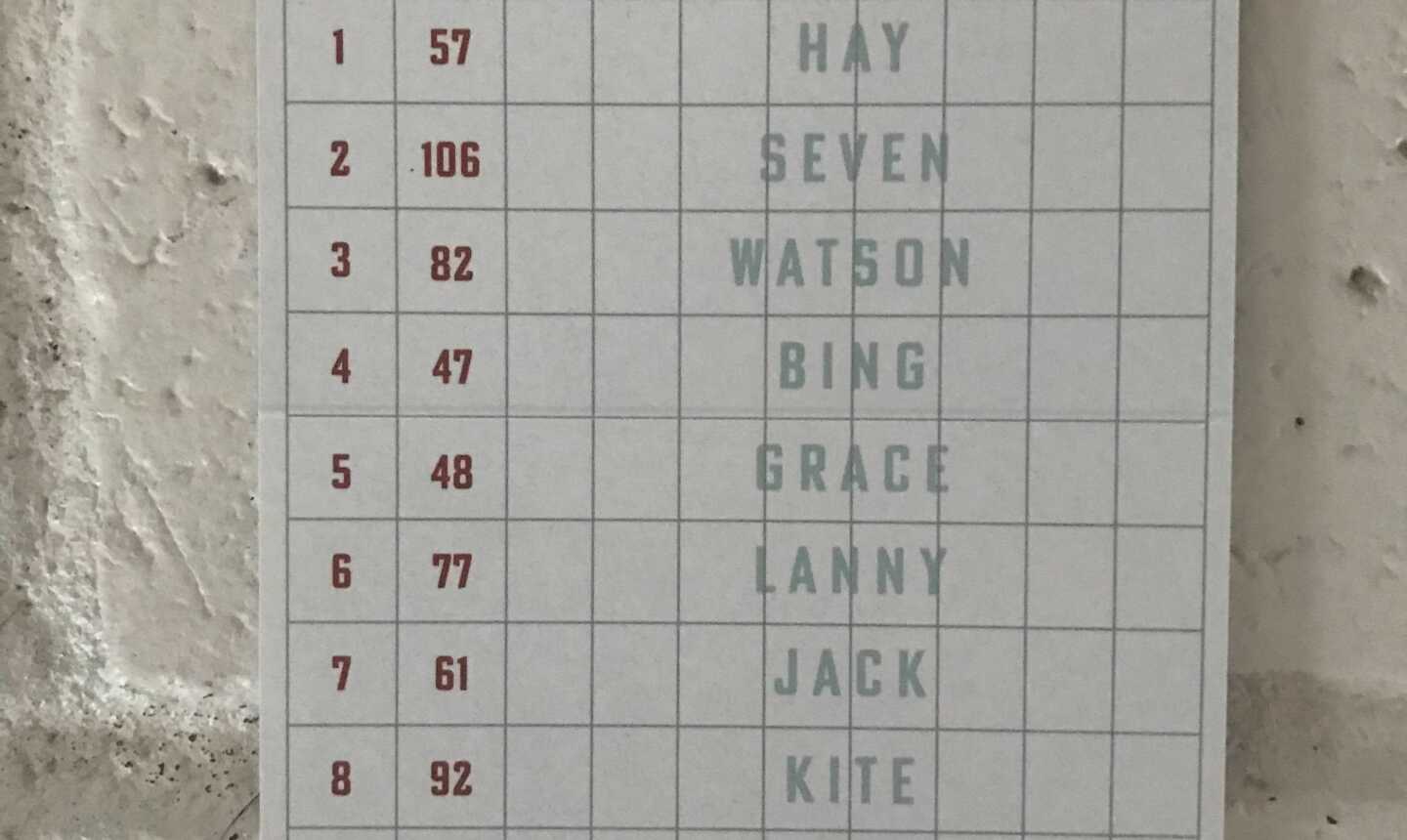 Each hole is named after a famous golfer on the new Hay course. Jason Deegan/GolfPass

PEBBLE BEACH, Calif. - Beau Welling steps to the first tee of The Hay par-3 course at Pebble Beach Resorts with putter in hand.

Yep, that's right ... putter. His stroke trundles the ball down the fairway through a swale in the green where it settles on the back shelf about 15 feet from the flag, a putt he sinks for a ho-hum birdie.

This is the vision Tiger Woods and his TGR Design team, including Welling, had in mind while transforming the old Peter Hay par 3 into something exciting and interesting, playable and fun. The Hay, which debuts to the general public Friday, is where Pebble Beach Resorts will let its hair down a little with the best new logo in golf, music, putting off of tee boxes and potential holes in one on its new and improved 670-yard short course. Best of all, a new putting course will be free for all anytime, and the clubhouse, when completed by September, will be a casual hangout spot, serving up drinks, food and glorious views of Stillwater Cove.

A grand opening ceremony Thursday celebrated the legacies of Peter Hay and R.J. Harper, two long-time resort pros who would have been proud to see this day finally come. So would have Woods, home in Florida still recovering from his February 23rd car accident in southern California. He grew up playing a short course in SoCal like The Hay.

History of The Hay

For years, the Peter Hay Par 3, which debuted in 1957, was more a staging area for major tournaments and events like the Pebble Beach Concours d'Elegance than a world-class short course. It would get torn up to house tents and cars and pieced back together once the spectators were gone. It almost happened again after the 2019 U.S. Open, but a last-minute meeting changed its future.

"The question was asked, 'When we are through with this, what is this going to be on a scale of 1 to 10?' ... Probably a six, maybe a 7," recalled Bill Perocchi, CEO of Pebble Beach Resorts. "And we said: 'Look, this is Pebble Beach. This is the greatest resort in the world. Since when do we settle for something that is a 6 or a 7?' So we started talking about what do we need to make it a 10."

The choice was easy: Woods, considering his illustrious history at Pebble Beach, and TGR Design. With only eight acres to work with, the first priority was to create enough space between holes. Making it enjoyable for beginners and challenging for Pebble Beach's avid golfers, while maximizing the views, was also high on the list.

"We wanted variety. Each green had to be memorable," said Bryon Bell, president of TGR Design.

Six of the course's 10 bunkers are located on one hole: No. 2, the exact replica of the famous 106-yard 7th hole at Pebble Beach Golf Links right down to the shape of the green and the elevation drop off the tee.

Tee boxes at 1, 2 and 8 stare off into the ocean. "The old Peter Hay never recognized the view like you see now. It's incredible," Perocchi added.

The greatest things about The Hay are its playing options and its logo. The idea for the new logo, a sea lion with a flagstick in its mouth, was taken from a photoshoot/marketing campaign Peter Hay oversaw decades ago.

As for the course, even a golfer with flippers for hands should make at least one par. Groups can play it as a serious skins game or a hit-and-giggle outing instead. With the holes ranging from 47 to 106 yards, putter can be played off of every tee box except no. 2.

A plaque at each tee shares a story about a famous golfer with ties to the resort. Tom Watson (3), Bing Crosby (4), Lanny Watkins (6), Jack Nicklaus (7) and Tom Kite (8) are among those celebrated. The 4th hole is a hoot: a semi-blind uphill shot from 47 yards. Good luck hitting the 7th in regulation. My group went 0-for-7 with a few extra tries.

The greens are demanding, especially above the hole. I doubled the 9th when a skulled chip went long into no-man's-land. I did make up for the blunder with one birdie but missed at least two other good chances on misreads. On the 5th, Welling and another playing partner Aaron Flink had to putt with their backs to the hole to coax balls gently down a speedy slope.

The contours on the putting green are even more severe by design. The scorecard names its most notable features - Camel's Back, Whale's Tale, Scallop, etc. Danger lurks everywhere. I putted off the green at one point, eventually losing my match, 1-up, to Welling. We battled over 18 holes, but it can be set up in 6- and 12-hole routings for longer, harder putts.

"There are more severe contours you wouldn't see on a regular course," Welling said. "There are big breakers."

The putting green and part of The Hay will be wired for music, although when it's played and how loud is yet to be determined. Music is the hot new trend on new short courses at Forest Dunes, Pinehurst, Gamble Sands and Sand Valley.

Before you bemoan the $65 adult rack rate (up from $30) for The Hay, consider some perspective:

1. Everything related to golf is expensive to build, maintain and enjoy on the Monterey Peninsula.
2. It isn't the priciest short course in America. That would be Top of the Rock at Big Cedar Lodge near Branson, Mo. Its $150 greens fee delivers a former PGA Tour Champions venue that is significantly longer and arguably more scenic.
3. There are discounts on The Hay for juniors, including free rounds for those under age 12 and $5 rounds for Youth On Course members.
4. The Pebble Beach Co. made a huge commitment to The Hay and growing the game with this project. Perocchi said the resort scrapped its plans to turn the old driving range into 15 lots to sell. It will now be the staging area The Hay once was. Think of the financial windfall the resort sacrificed to revive The Hay.

That wasn't lost on Macgregor Hay, the great nephew of Peter Hay, who attended the grand opening wearing a kilt in the family tartan. "Peter Hay would have said in his famous Scottish brogue, 'Isn't it a wonderful thing that the course is coming instead of going?'" he said.

Great story and exciting addition to the Pebble Beach resort!