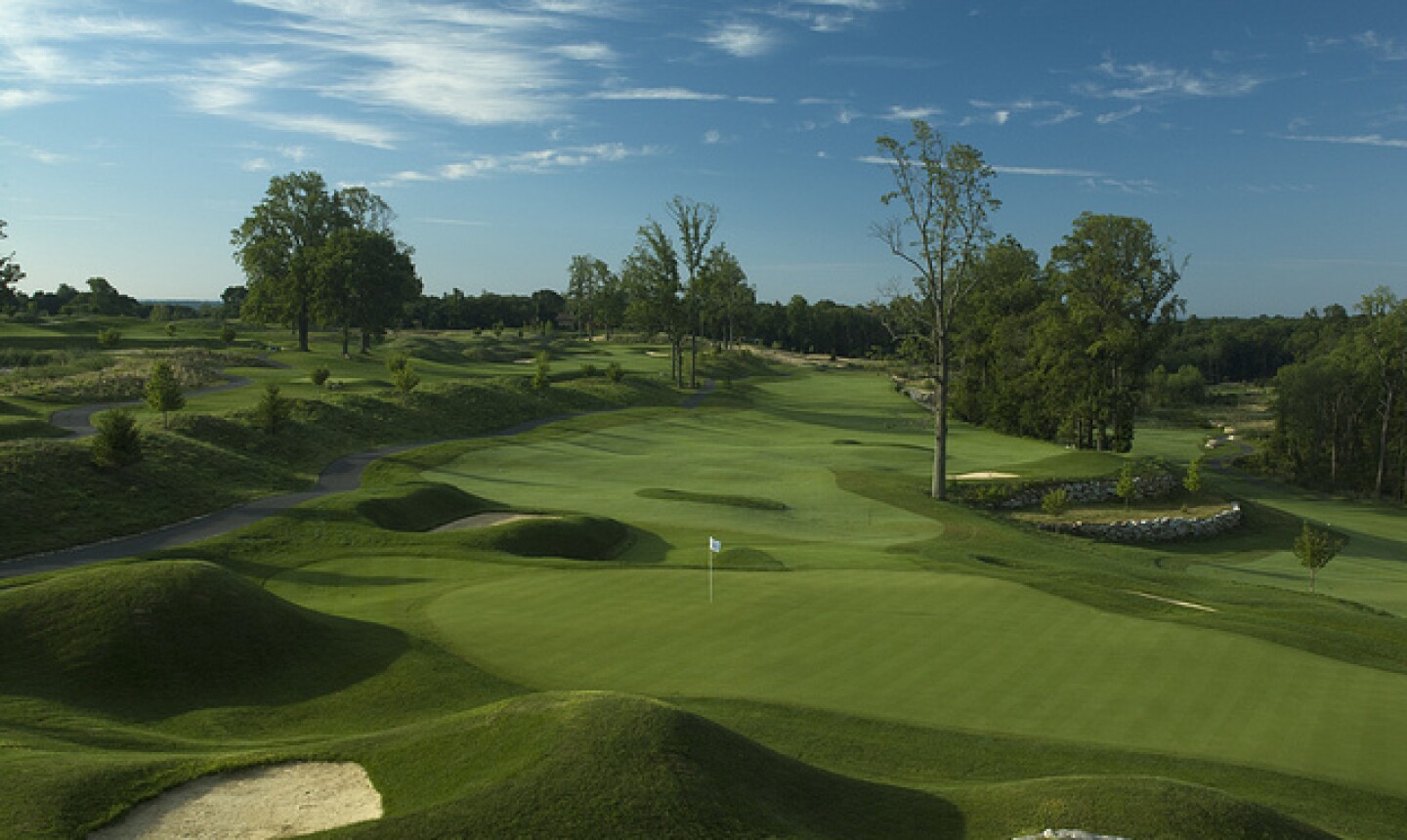 Pound Ridge Golf Club in New York is as beautiful as it is difficult. Courtesy of Jim Krajicek/Pound Ridge 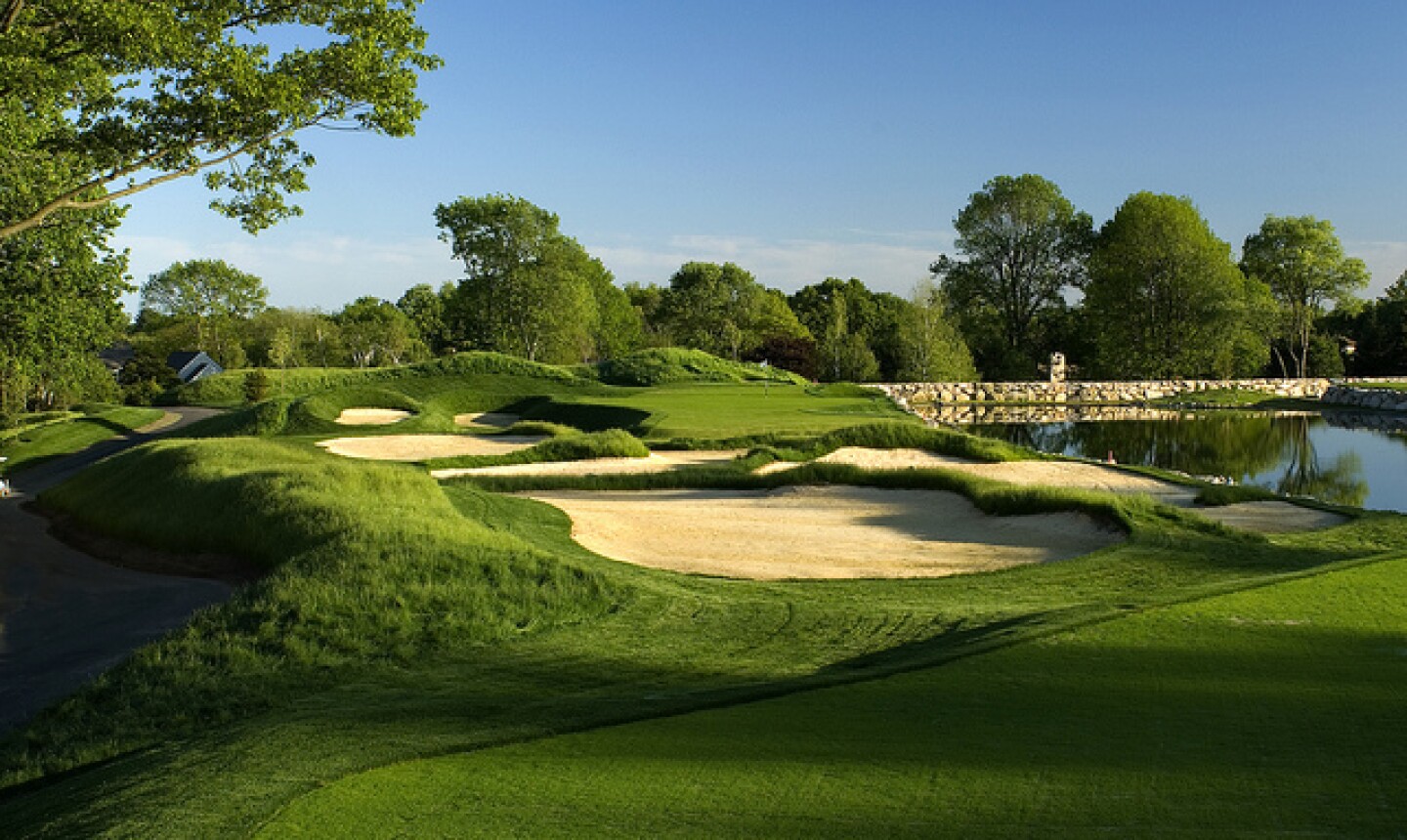 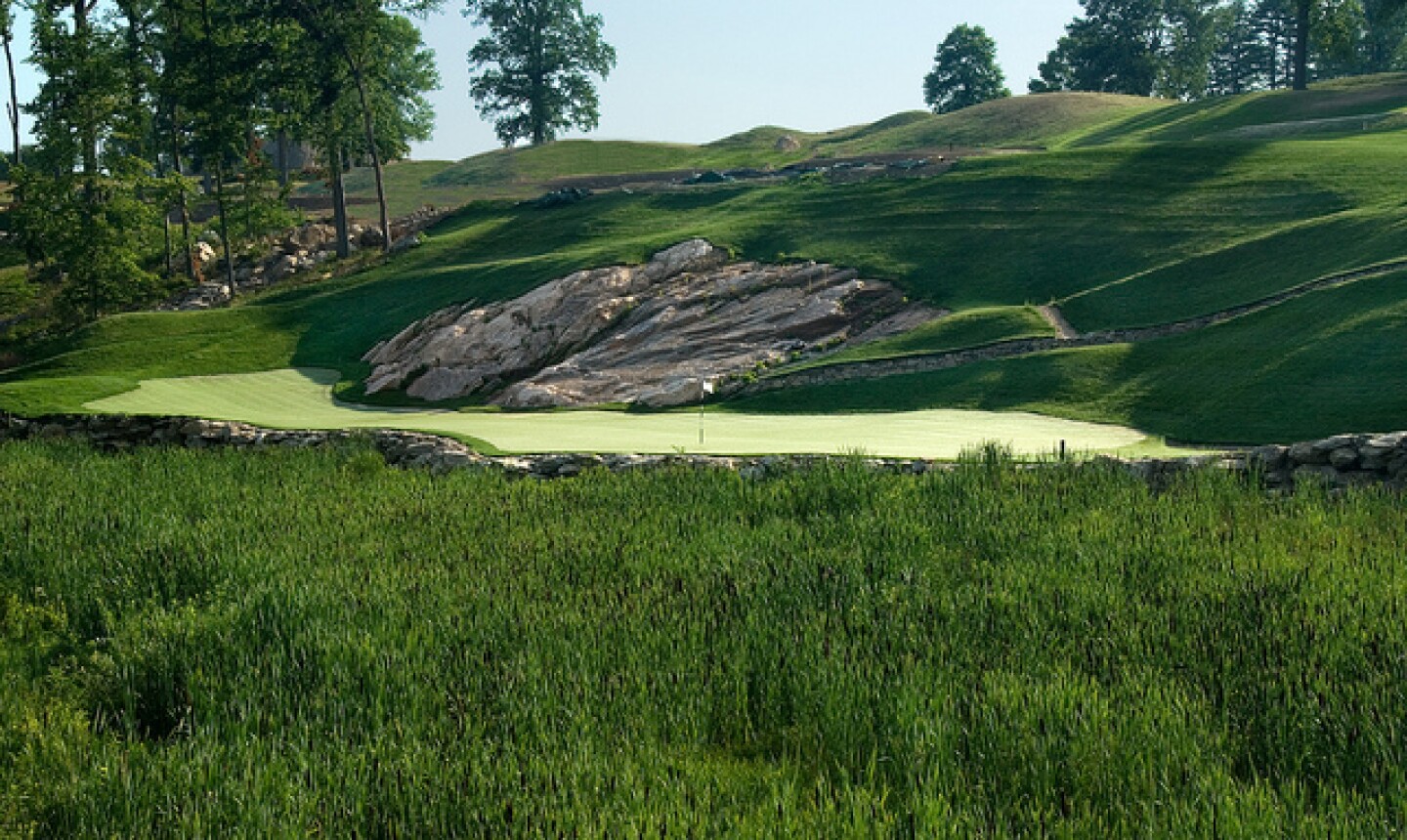 The 15th hole at Pound Ridge Golf Club is one of most unique par 3s in the country. Courtesy of Jim Krajicek/Pound Ridge 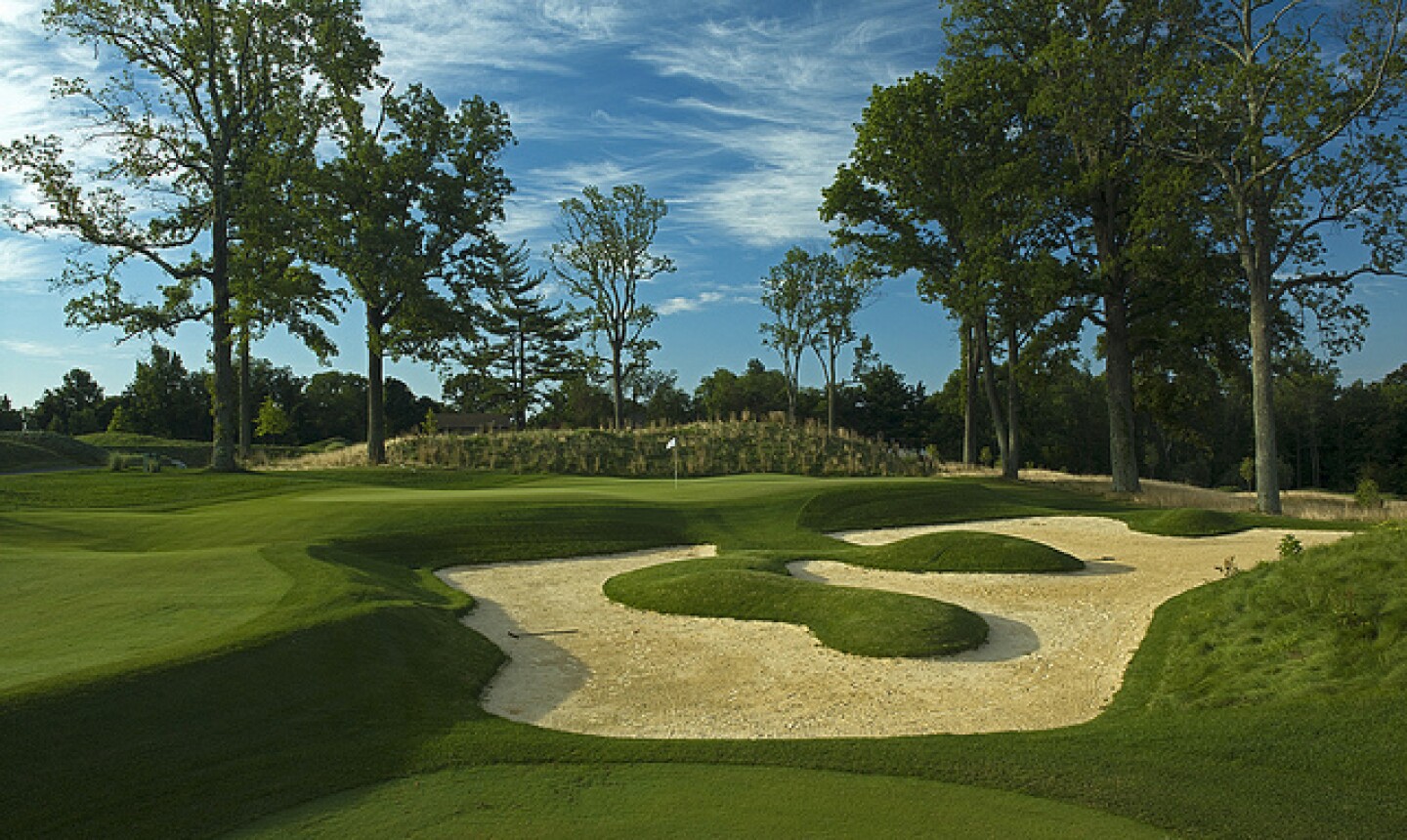 Finding the fairways on holes like the par-4 17th at Pound Ridge Golf Club is key to having a good round. Courtesy of Jim Krajicek/Pound Ridge

The first thing that strikes you is the beauty of this course. Lakes, streams, rock outcroppings, elevated tees, mounds, a variety of bunkering and perfect bentgrass greens are blended together into a true work of art.

Each hole is entirely different than the other as you make your way through this 7,165-yard par 72.

The next thing you notice is how hard it is -- or at least how intimidating it is. But that should come as no surprise, considering the architect.

"If you can create in the mind of the golfer that he can remember some of the holes, that's extraordinary," said Pete Dye, who designed the course with his son Perry Dye. "And if you can make it look very demanding, yet still keep it playable, and then you've hit a home run."

By all accounts, the Dyes, as well as owner Ken Wang, appear to have rounded the bases on this one.

One thing is for sure: once you play it, you won't forget it.

Located less than an hour north of New York City and less than 15 minutes from Stamford, Conn., and Greenwich, Conn., the Pound Ridge Golf Club was crafted by the Dyes as well as longtime construction manager/lead shaper Michael Langkau.

It was a difficult site to build on, with plenty of rocks and boulders, uneven land and hardwood forests. In fact, many of boulders were left as is, creating one of the most visually stunning settings for golf in the U.S.

The property also features some of the highest points in Westchester County, with a number of tee boxes offering panoramic views of the surrounding countryside.

"It's a tough site," Pete Dye said during construction. "But things that make it hard to build make it more beautiful."

Case in point would be two boulders.

The par-5 13th is home to "Pete's Rock," a giant boulder that rests in the middle of the fairway. The obvious problem is that you either need to pick a club that takes it out of play off the tee or make sure you're so accurate that you don't hit it, because bouncing off of it could be disastrous considering what surrounds the fairways at Pound Ridge.

As to why Dye left it there, he said, "I think the man upstairs when he put there, put there not to be moved."

The rock formation on the par-3 15th -- dubbed "Headstone" -- is even more dramatic. It flanks a 9,000-square-foot green that definitely comes into play. Fortunes can be either good or bad if you hit it; it all depends on the bounce.

Those are hardly the only highlights on the course, though. There are a few blind shots, sharp doglegs, some wetlands and plenty of uneven lies and frightening bunkers. The key to success is knowing where your golf ball is going to go and planning the right shots. It's as simple as that. Golfers need to at least bring their "B" game, no matter what tees they play.

For out-of-towners, a stay-and-play package is the way to go, and Pound Ridge has partnered with a few hotels.

Perhaps the most notable is the Stamford (Conn.) Marriott Hotel & Spa, which is located just 15 minutes from Pound Ridge.

"The Stamford Marriott is a perfect match for Pound Ridge, providing convenient access to the course, elegant accommodations, fine dining and a spa, where golfers can relax post-round," Wang said.

Hotel guests can also enjoy the flexibility of Pound Ridge's weekday nine-hole rates before 8:30 a.m. and after 4 p.m., which are substantially less than the advanced tee time rack rates, which run from $115 to $195 during peak season.

Pete Dye doesn't build easy golf courses, so if you know and expect that going in, you'll be fine with the challenges, which never really let up on any hole.

If you're a fan of Dye's work, you'll love Pound Ridge G.C. It's visually stunning, you hardly ever get a flat lie and if you're going to challenge his design, be prepared to pay the consequences if you fail (i.e., lost ball and high score).

It's sort of reminiscent of the Dye Course at French Lick Resort in Indiana -- incredibly beautiful, but you can never really relax. Disaster is around every corner if you start spraying it just a little, especially with the tall fescue mounds threatening to gobble up any wayward shot.

Practice facilities are good at Pound Ridge, especially the short-game area. The driving range, which is bordered by netting, is the weakest part of the equation. The club also doesn't have a permanent clubhouse yet, but the temporary facilities are more than adequate. After all, it's the golf course that's the star here anyway. 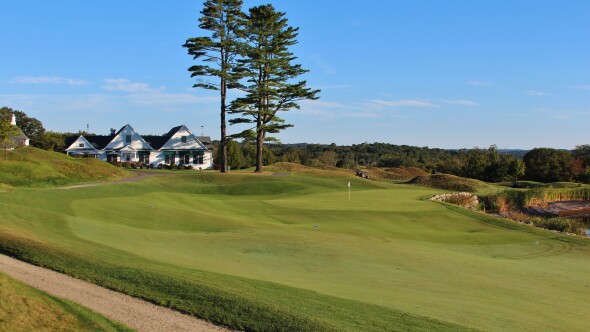 Galleries
Pound Ridge Golf Club in New York: A challenging and scenic Dye test
It's easy to forget that Pound Ridge Golf Club is less than 50 miles from New York City. The most remote holes near the Connecticut state line sneak through the woods in scenic solitude. They're gorgeous and ferocious.
8 Images