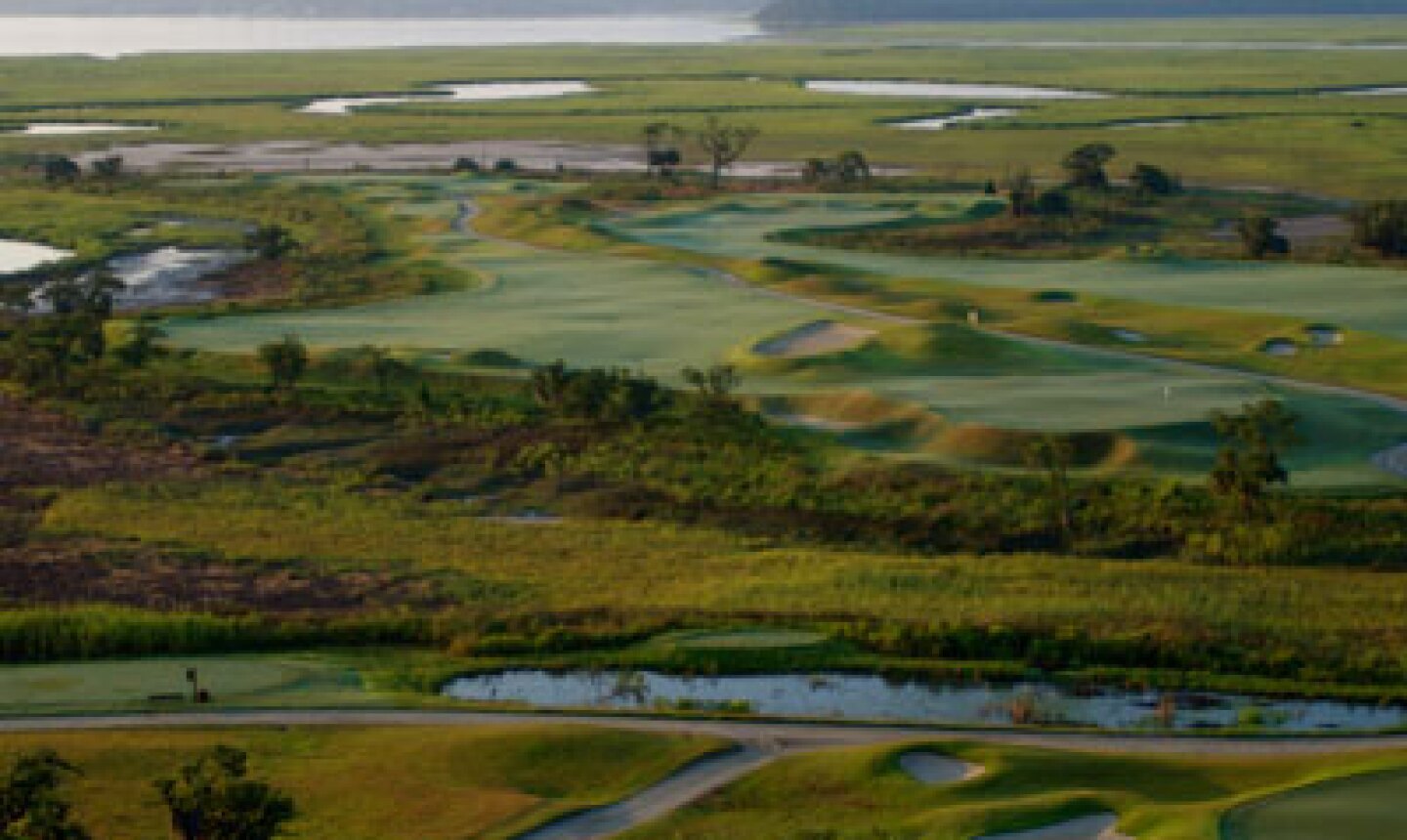 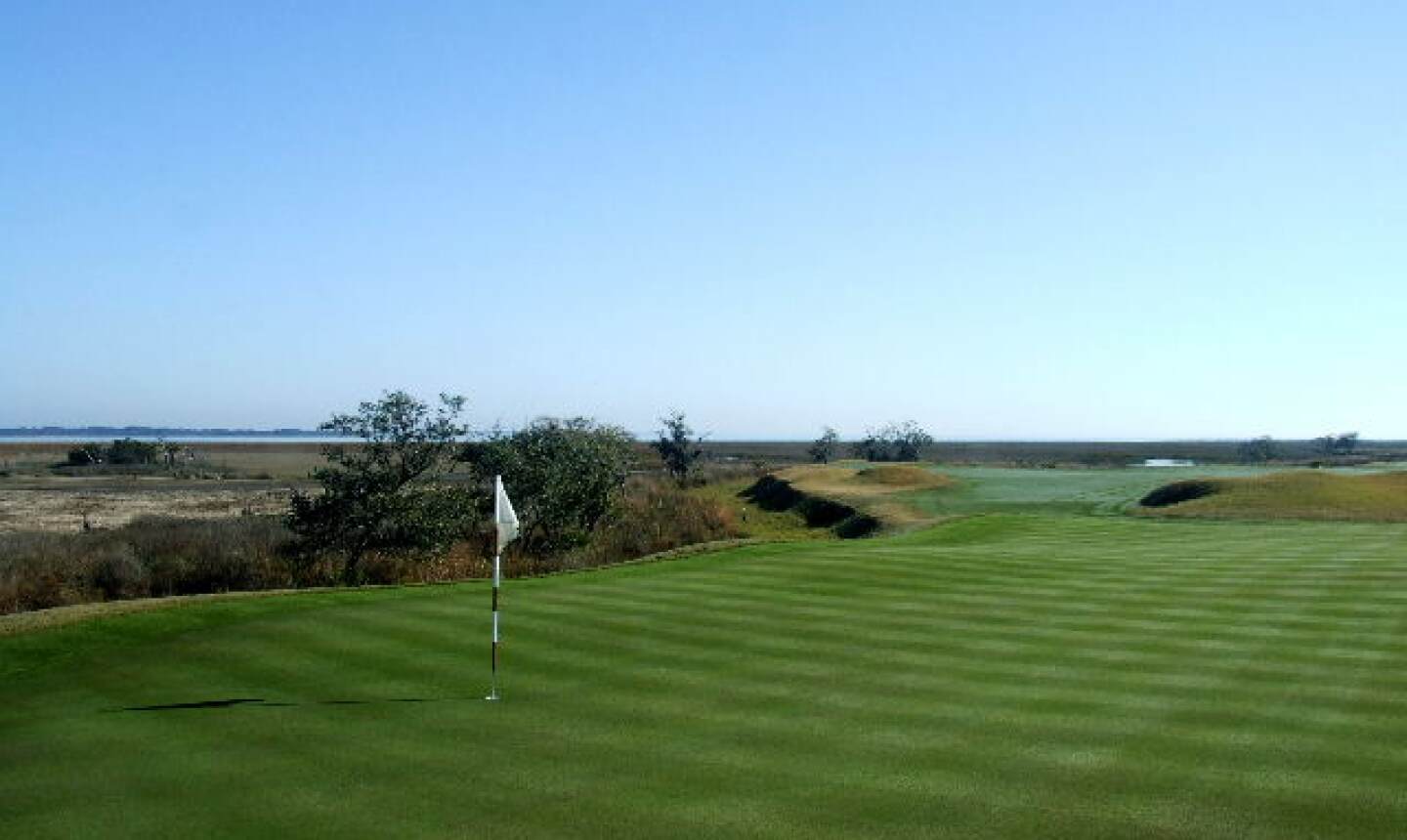 The 14th hole is the best of a collection of short par 4s at Colleton River. Brandon Tucker/Golf Advisor

"This is the best course I have ever built," announced Dye, the man behind renowned courses such as the TPC Sawgrass, Whistling Straits and Harbor Town Golf Links.

"We're not arguing with him," said John Ussery, the developer at Colleton River. "I think what Dye loves about Colleton is the piece of property. You can see the Atlantic Ocean from 10 of the holes."

The front nine on Pete Dye's course at Colleton River Plantation is a mostly traditional-looking lowcountry layout, set in deep forest and weaving throughout the residential community with subtle doglegs. But it's the second half of the course that makes Colleton River among Dye's most remarkable. From the ninth hole through the finish, you're on open, coastal land nudged up to the Port Royal Sound, which filters out toward the Atlantic Ocean.

Dye's love of the unique palette here is evident in how modest he was with moving land. You won't see many gigantic artificial mounds or elevation changes. Railroad ties are here of course, but not overwhelming. This is Dye at his most subtle. He lets the views do the talking.

Though there are plenty of holes to challenge even the most skilled player, average players are going to love the collection of risk-reward short par 4s. The first hole is a welcoming starter, featuring a wide fairway and just 345 yards of length. The 10th is another shorty, with a shallow green perched along the water on the left side.

But the best short par 4 is the 14th. Long hitters can drive it, as it's only 290-330 yards to the center of the green. It's an incredibly large green that can hold hot tee shots, though it features sharp drop offs in each direction, marsh to the right and a large bunker with a high lip in front. Dye is a master of giving golfers a sudden shot of confidence to go for a shot they might not be able to pull off.

Both the Dye and original Jack Nicklaus course at Colleton River are private, though memberships are currently available and can be awarded through purchase of property within the plantation. Membership peaks out at about 700 people for both courses.

Pete Dye's best ever? Colleton River won't draw major championships (its yardage is a modest 6,907 yards), but for the club golfer, there may be no better course in Dye's portfolio to play on a daily basis. It's not an over-the-top spectacle like Whistling Straits, or horribly difficult like the Ocean Course at Kiawah Island. But you can't beat the beautiful ocean views predominant on the backside. And Dye's beautiful bunker complexes blended within lowcountry terrain give the front nine enough character to compete with the jaw-dropping backside.

According to TravelGolf.com and Golf Digest, Dye's course isn't even the best at Colleton River. That designation goes to the original Nicklaus course next door, which checks in as South Carolina's 20th best and TravelGolf.com's seventh best Hilton Head course (though this golf writer strongly disagrees with both publications' rankings and wonders if it's a result of a new Nicklaus clubhouse drawing bigger raves than the course itself. For my money, Dye's course is one of the finest courses I've seen in the past year and edges Nicklaus' effort).

The Dye Course at Colleton River is a regular host to a U.S. Amateur Championship Sectional Qualifier.