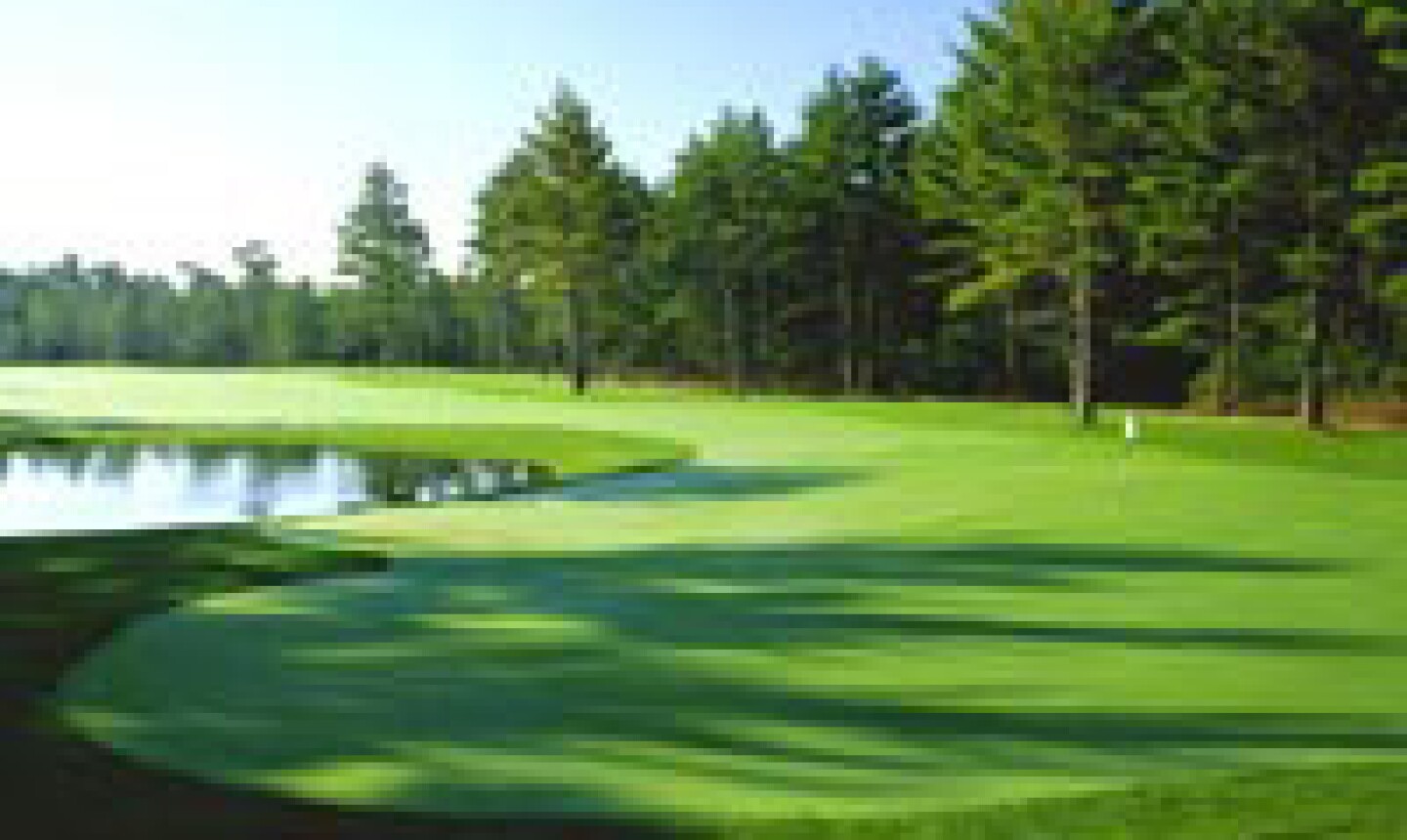 Hole No. 5 at Nicklaus Course .

PLYMOUTH, MA - In a town more known for its famous "rock" than its green grass fairways, golf is slowing taking over the tourist scene in this New England tourist town.

Striking daily-fee courses aren't the norm in the country club world of the East Coast havens like New York and Boston, but that is changing as golf booms continue to build bigger and better public places to play, like the Pinehills Golf Club.

In fact, Pinehills, which consists of a 7,175-yard Rees Jones design that opened last year and a Nicklaus Design creation that opened in May this year, claims it was "created to rival the country's most prestigious golf clubs.'

Pinehills has plenty of competition in the area - with the four-star Waverly Oaks Golf Club right across the highway - but together, the three courses make up one good weekend getaway for golf. Both Pinehills courses are blessed with all things grand about upscale, modern designs - ideal terrains, complete with rolling fairways, scenic elevation changes and natural surroundings.

The Jones course races through depressions carved out by the Ice Age known as kettles and other dramatic glacial imprints. That might sound overbearing, but Jones designed wide fairways - although they might not seem so wide when you drive your ball over one of their ridges - to catch most balls and give golfers of all levels a chance to hit the green in regulation. Also, there's virtually no water hazards to be found either.

"I think the Jones course offers great variety. It's fair but challenging," Pinehills head pro John Tuffin said. "The back nine is very dramatic on holes 14 through 16, but each hole is unique. You get to the tee and you see a different hole each time.'

The best combination of holes - No. 14 through No. 16 - features a par-3-5-4 combination. No. 14 requires a monster 219-yard bomb over a ravine to a green protected by a cavernous front bunker. If your ball finds that brutal bunker, the only saving grace is the scenic view of the property from the tee.

No. 15 demands the toughest carry of the day (roughly 200 yards) and plays uphill to the highest point on the property, roughly 500 yards later. Five bunkers await any errant approach shots to the green. No. 16 is a banana-hook right that plays 401 yards. Four bunkers guard the entire right side of the fairway.

The Nicklaus course has a different charm all its own.

"It is dramatically different from the Jones," Tuffin said. "The greens are smaller and there's more undulation. There's a premium on the approach shot. There's more of a rolling fairway and the collection areas around the greens give it a Pinehurst feel. You could be chipping, pitching and putting from there.

Besides the two courses, which are in impeccable condition despite their newness, Pinehills actually outshines many country clubs with its large clubhouse and service. The crown jewel might be the club's practice facilities.

Complete with five large putting greens, a huge double-ended driving range and three chipping greens with bunkers, the practice area is perfect for the Pinehills' Golf Academy or the Dave Pelz Short Game School, where players of all skills can go for a quick swing fix or lesson.

If you enjoy a more isolated round of golf, play the courses now, while the multi-million dollar homes have yet to be built. Or if you enjoy the scenery of seeing a dream house you hope to own someday, check back in a couple of years when the housing really starts to fill in. Either way, Pinehills will be an experience to remember.

The true beauty of Pinehills is its location, about an hour-and-a-half drive's south of Boston on the coast of the Cape Cod Bay, which flows directly into the Atlantic Ocean just several miles away. The quaint town can provide a true vacation get-away with its golf and tourist attractions and it's close enough to invade for a day trip.

Plymouth Rock, where the Pilgrims landed all those years ago, is a great tourist trap after a round of golf, or for the non-golfing side of the family while you're on the course.

Tuffin said many people stop by to play either on their way to famous Cape Cod or on their way back from the Cape, an irresistible summer haven for the East Coast crowd.

With a Sheraton, Marriott and many bed-n-breakfasts and motels around town, there's no shortage of places to stay. "Our location is fantastic to draw from," Tuffin said.

And Pinehills has room to grow. Tuffin said there is enough land for two more golf courses, but no plans are currently in the works. So even if you've visited Pinehills once, check back again. There might be another great challenge waiting for you.