Tiger Woods is betting on this new golf concept. Is it the real deal?

We visited PopStroke, a putting-oriented golf-entertainment concept poised for growth.

You will never go broke betting on golf being late to adapt to cultural shifts in technology and innovation. And to be fair, it's not always a bad thing. Tradition and resistance to change have long been features of the game, not bugs. Still, golf is not immune to shifting demographics and evolving technology.

In the last few years, after good returns in England, Topgolf crossed the Atlantic to update the tired driving range for good, bringing much-needed flash to Roy "Tin Cup" McAvoy's dusty relic of a profession.

Now, miniature golf gets its makeover, and Tiger Woods is getting involved.

Enter PopStroke, a "golf entertainment concept" that does to the putter what Topgolf and its clones have done to the full swing.

I will always appreciate the kitsch and time-resistant charms of the windmill and the clown's mouth, but PopStroke is a much-needed disruptor.

PopStroke succeeds in taking many of mini-golf's virtues and integrating them with the 21st-century's ever-increasing demand for "experiences" in leisure and service industries. With synthetic-turf putting courses, a smart F&B offering and a few other tricks, it is an impressive operation.

As in the old model, the center of the PopStroke experience is the actual golf. In this case, though, rather than themed manmade obstacles, the courses mimic "real" ones, with defined cuts of turf, flowing contours, sinewy turns and even "bunkers" which, while still astroturf, are white and shaped to resemble their big-course brethren. You can even putt out of them, though ski-jumping the ball over the lip takes a bit of touch.

There is strategy involved in the playing of each hole, designed by the firm of Jackson-Kahn - real-live golf course architects, in other words. And they're not just any architects, but the firm PXG founder Bob Parsons entrusted with his domain at Scottsdale National in Arizona. PopStroke offers the beginner-friendly Kahn Preserve Course and the more challenging Jackson Trap routings.

Just last week came an announcement related to PopStroke's future venues, currently set to open in Fort Myers, Fla. and Scottsdale, Ariz., sometime next year. Tiger Woods and his firm of TGR Design will be designing them.

“Some of my happiest memories are spending time with my pops on the golf course having putting contests,” said Woods in the press release. “I’m looking forward to others enjoying time with their kids at PopStroke. This is a new way for individuals to experience the game of golf. It’s about bringing people together.”

Some of my happiest memories are spending time with my pops on the golf course having putting contests. I’m looking forward to others enjoying time with their kids @popstroke. Link in bio for more information.

In another nod to the old, PopStroke has an on-premises ice cream parlor. But practically everything else about the experience is updated. The main difference: the sports bar restaurant that presides over the courses like a clubhouse. The offerings are geared toward the evolving tastes of its clientele: craft cocktails and local beers feature on the drink menu, while flatbread pizzas and impressively meaty chicken wings are the focal point of the menu. It is clear that management wants the food to be better than good-enough.

The same goes for the service, which I found to be of a uniformly high standard. Several TV screens are in view from every seat in the indoor/outdoor space, which includes a three-sided bar, hightop tables and even low-slung lounge seating. On-course refreshment is encouraged, too; every hole has platforms where players can rest their drinks while they putt, and if you order drinks via the PopStroke smartphone app, a member of the wait staff will bring it straight to the hole you're playing.

To make the experience stickier, PopStroke has more recreation opportunities beyond just the two putting courses. They have three large Golfzon simulator bays, each rentable by the hour ($40-$60) for up to 10 people who want to take some full swings. And out in front of the simulators is a patio area with a couple other games, including cornhole and foosball. These other touches are meant to make the venue a hangout, rather than a place where people do one activity and barely linger.

You could conceivably go to PopStroke and just watch a football game and have a beer, never even setting foot on the putting courses. Or, because there's a massive TV screen on one exterior wall of the building, you can keep tabs on the game while you play, with a mixed soundtrack ranging from Hootie & The Blowfish to Taylor Swift piped in through well-disguised speakers.

Scorecards and pencils are available for analog guests, but there's also the aforementioned app for that. PopStroke's smartphone app is slick and relatively easy to use for scorekeeping and drink-ordering. As an added incentive for using the in-app scorecard, you can post your scores and see how you stack up to other visitors that day, week or month, with prizes and honors handed out to the top performers. There are plans to introduce computer-chipped golf balls that keep score automatically, but for now, the pellets at PopStroke are by the up-and-coming OnCore brand, who have their own designs on 21st century golf entertainment venues.

Given the technology involvement, F&B and general vibe, comparisons between PopStroke and Topgolf and its clones are inevitable. I asked Kara, my non-golfer fiancee, for her preference between the two concepts, as in recent months she has been to a work event at BigShots, a Topgolf-like venue in our town of Vero Beach.

"I feel like I'd need to take lessons in order to go to BigShots or Topgolf," she said. "Everybody can putt." 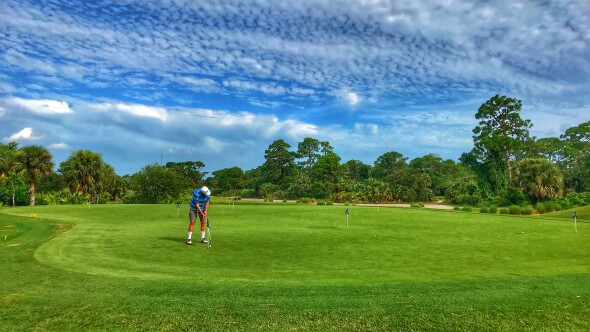 Articles
4 Min Read
On municipal golf course putting greens: the practically-free, easy way to get into the game
One of golf's big barriers to entry is its perceived cost. But putting and, to a lesser extent, chipping are essentially free for anyone.

Even as an experienced player, I am inclined to agree. Having been to Topgolf a couple times, I find I am more eager to return to PopStroke. To be honest, the peripheral aspects of both experiences are similarly good; the food and beverage at both venues is solid, as is the general hangout setup. But in terms of interesting golf experiences, I find PopStroke to be more fun and engaging. Plus, to Kara's point, putting is a foundational golf skill that is easier (and cheaper) to pick up than the full swing. What's more, knowing that every PopStroke venue's courses are going to be different makes me eager to visit the new ones when they open. At Topgolf, the ranges and targets are the same everywhere.

In terms of value, I'm inclined to give PopStroke the edge, too. Single rounds take about an hour and cost $15 per person, and while this is a bit steeper than even high-end mini-golf rounds, the upgrade to 36 holes is just $5 more per person, which I think offers some nice value. If you want to play all you can, unlimited day passes are just $22 per person.

Between the execution of the experience, the service and the value, plus Tiger Woods' involvement, I think the future is bright for PopStroke.

(DISCLOSURE: One of PopStroke's board members and investors, Pete Bevacqua, is the president of NBC Sports Group, which owns Golf Channel and, by extension, Golf Advisor. I visited PopStroke on my own initiative.)

while I agree some courses are just to hard, that is why they have different tees, if it is to hard move up a tee or two, play senior tees or the womens, I am a senior and when I play with my son who only plays a time or two a year we play the senior tees so it is a little more even for him, and I don' t have to hit a 300 yard drive to be able to get to the green in two. and yes $50 is high for most folks, $20-25 would make it more affordable for a lot of folks, and if you check out the hot deals, you will find a lot of nice coursed for that amount, may just be noon or afternoon time.

I like it, think it's a great idea! When our kids where younger and we'd go camping we along with other family's would play mini golf on the camp grounds. Drinking of course for the adults and had a blast. Some of our best memories. But now the kids are older and the "little kids" mini golf doesn't appeal to them anymore. So this is a great concept. Hope to see them
around the Chicago Land area. Go tiger!

Just a quick response to those who think that people are quitting this game because of the difficulty of the courses and wanting to make it easier with bigger holes, shorter length, etc....

I totally disagree with that conclusion. With what is being suggested will make golf into a boring arcade game - it will ruin a great game and who will spend any amount to play it? Not many.
The major problem for attracting and keeping players is the cost of the game - clubs worth hundreds of dollars each and courses costing well over $50/round are pushing people away from the game. Today, it is more difficult for many young people to find jobs paying a decent wage and also for seniors who have lost their income and pension plans. I don't want to talk politics - but take a look around and see what politics is doing to the standard of living - the rich get richer and everyone else is going the other way. Sports like golf will no doubt suffer big time, if this trend continues. The very same sponsors and people making the huge dollars now, in the world of golf, are the same people who will eventually kill this game. Maybe we need to think a lot deeper than just making it an arcade event and to start thinking what is the long term plan for preserving this great game?

Many people will go there in the evening, already having had a full meal...

Too many elderly are quitting the game. Too many kids are quitting after the first year. Why? The game isn't fun for them, it's too difficult. Much has been done to shorten the courses but from inside 100 yards, it's a level playing field. Whether you're the best golfer in the world or his 88 year old grandfather.
Golf courses need to have 2 holes in every green. The standard 4 1/2" cup everyone plays and a 6" cup with a shorter "pirate" flag that designates the difference. You would be amazed how much fun poor golfers will have making those ten foot putts!

Why would Golf Advisor want to turn itself into an advertising vehicle to promote a miniature golf course? Sorry, you lost me on this one,

Tim Gavrich
Senior Writer
Now Reading
Tiger Woods is betting on this new golf concept. Is it the real deal?
Search Near Me