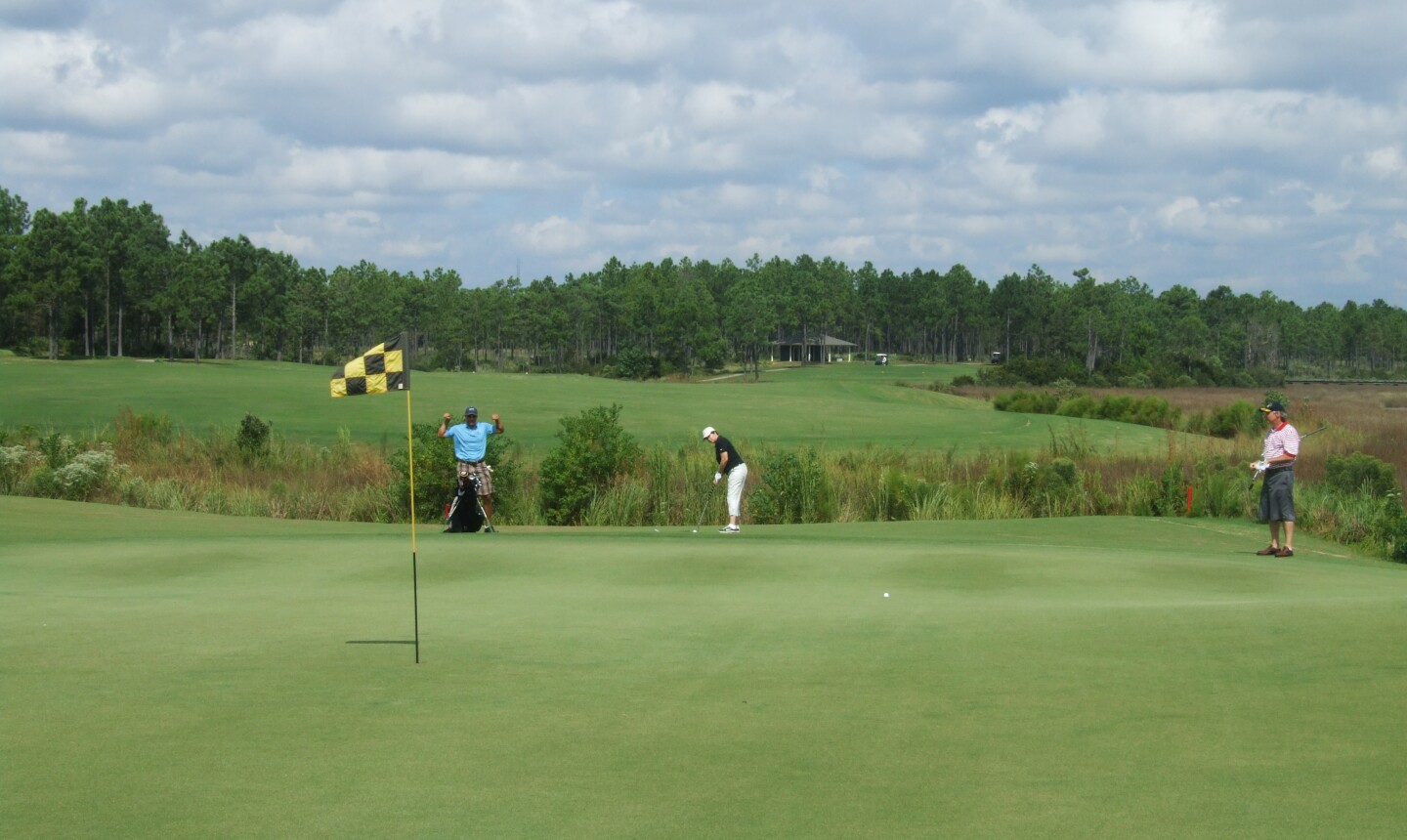 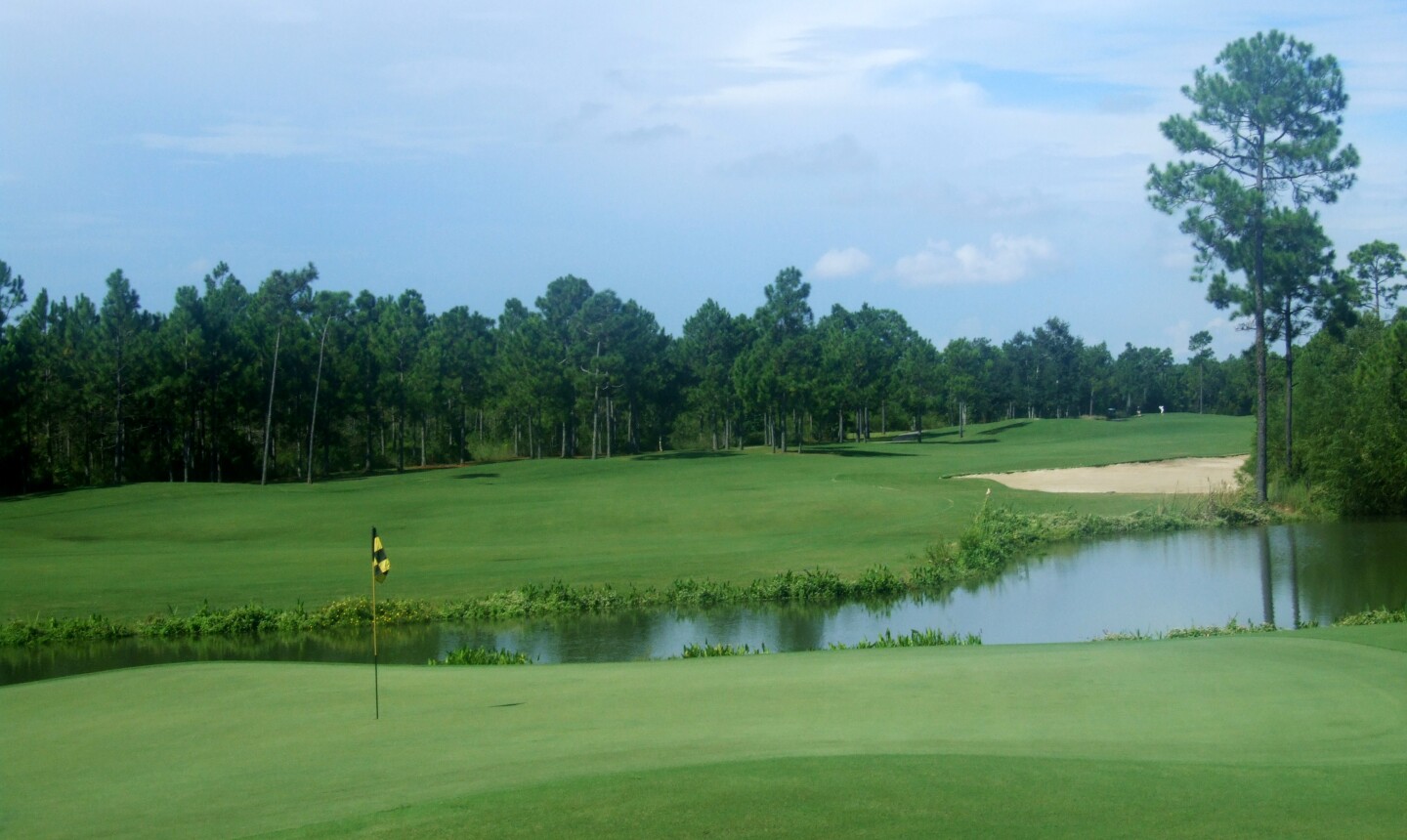 The greens at Shell Landing are large and fast, like on the par-5 third hole. Brandon Tucker/Golf Advisor

GAUTIER, Miss. -- Shell Landing, located about 20 miles east of Biloxi, is the course that budget-golfers with an eye for quality book twice during a Biloxi golf vacation.

Certainly be sure to book Fallen Oak and/or The Preserve Golf Club during your trip.

The golf course is plenty scenic, wrapping around wetlands and natural areas, but features a design by Davis Love III that can jump up and bite you in many places -- most notably on and around its greens. These greens are also large, averaging about 12,000 square feet, have few flat spots and always take on a different shape than the last. They're large enough that you should hit more greens than normal, but two-putting can be tough.

The first introduction to the danger of the course's greens comes on the par-5 third hole, which at 565 yards is too long for most hitters to reach in two, especially considering a pond guards the green just in front. The green is very shallow, with rear collection areas that swallow up long shots. The green is so sloped, however, getting a chip near the hole if it's in a back position is near impossible.

Water hazards are prevalent but not overwhelming throughout, coming into play on eight holes. Two of Shell Landing's most memorable holes are a result of their frontage on its open, natural wetlands.

A long wooden bridge leads golfers to the par-4 sixth hole, which at only 379 yards from the men's tees can still be the most difficult test on the course, especially if you're playing into the wind. Wetlands not only work all down the left-hand side; you also have to carry them on your drive and second shot. Woods to the right don't allow for much bailout.

It can be difficult to really take in the beauty of the hole until you've finally tapped in and can take in a panoramic view briefly before heading to the next -- a short par 5 with birdie opportunity all over it.

The 17th, which features more open marsh to the right of the green, is a little easier. The tee is elevated slightly, giving players a touch more confidence, but the green is also sloping, with several tiers, and features plenty of three-putt potential.

The conditions at Shell Landing were superb during our fall visit, no surprise considering its reputation as one of the front-runners for service conditioning in the area. Amenities include five sets of tees, a 25-acre practice facility, locker rooms and personal bag service and storage.

The Shell Landing development is accompanied by real estate, but it's seldom within view or earshot. Instead, the real memories will be from the course's spectacular marsh holes, most significantly the sixth and 17th.

Like most courses in this part of the Gulf Coast, Shell Landing is a great bargain. Peak season weekend green fees top out at $89 and can drop to as low as $55.

Newly re-opened after post-hurricane renovations, the Hard Rock Hotel & Casino on the beach is better and trendier than ever. Guest rooms go far beyond the basic casino room offerings, with sleek and stylish decorum and a three-point shower system that will inspire you to keep your finger off the snooze button in the morning.

You'll need to stay at the Beau Rivage at least one night if you want to play the stunning Fallen Oak, and that's no hardship. Also renovated and expanded, this elegant hotel, casino and spa features spacious guest rooms and numerous fine-dining options, including master chef Todd English's Olives. 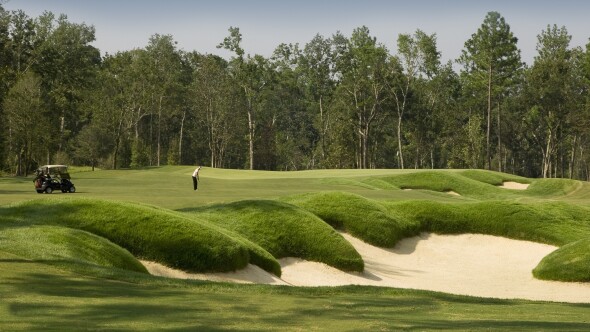 By Larry Olmsted
More from the author 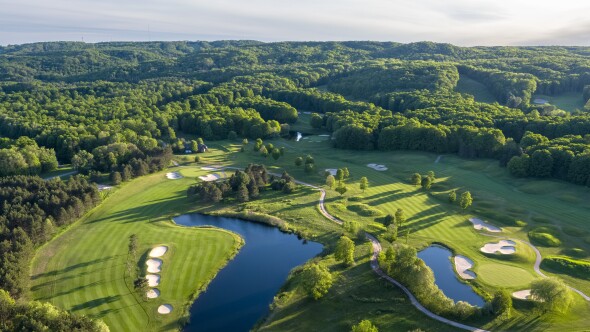 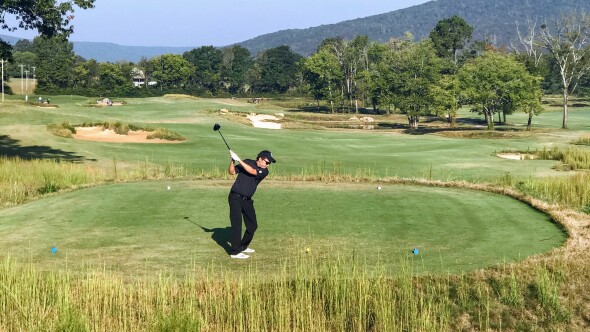 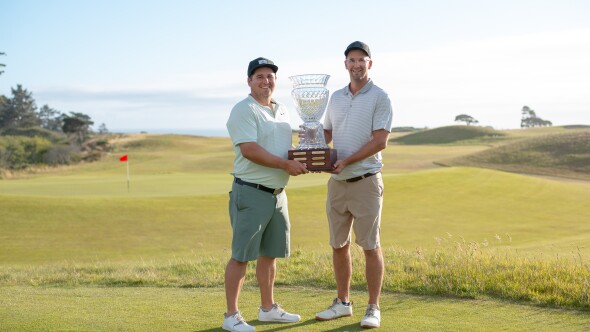 Articles
5 Min Read
Two-person team golf tournaments heighten the experience at several top resorts and destinations
Playing an awesome golf course is great. Playing it in competition with a friend by your side is even better.

Kira K. Dixon
Lifestyle Correspondent
Now Reading
Shell Landing near Biloxi, Mississippi: A budget-golfer's dream come true
New Cookie Policy
WE AND OUR PARTNERS USE COOKIES ON THIS SITE TO IMPROVE OUR SERVICE, PERFORM ANALYTICS, PERSONALIZE ADVERTISING, MEASURE ADVERTISING PERFORMANCE, AND REMEMBER WEBSITE PREFERENCES. BY USING THE SITE, YOU CONSENT TO THESE COOKIES. FOR MORE INFORMATION ON COOKIES INCLUDING HOW TO MANAGE YOUR CONSENT VISIT OUR COOKIE POLICY.
CONTINUE
Search Near Me