The Goofiest Products and Pitches at the PGA Show 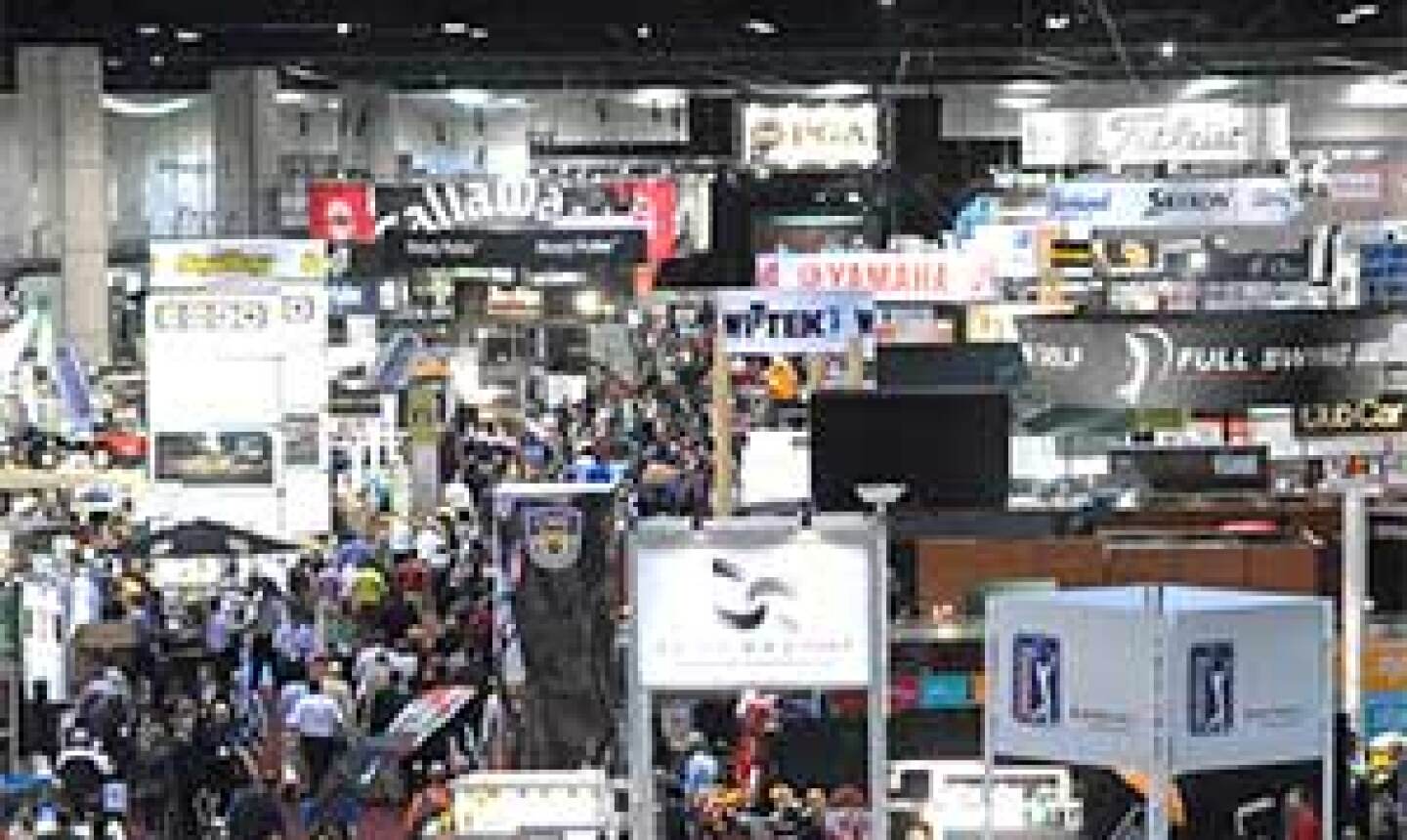 Rather than subject you to yet another list of "best new products" from the recent PGA Merchandise Show, I thought you'd get a kick out of seeing some products and pitches that struck me as some of the worst.

As a reminder, "The Show" is the annual, Orlando, Fla., circus, er, event where everyone with golf-related products comes to hawk their wares to the trade.

And I do mean everyone: from the big boys like Callaway and Nike to hopeful (and sometimes delusional) mom-n-pop inventors.

For the past 18 years I've left the Show saying, "now I've seen everything." And every year later I'm happily proven wrong.

So, without further ado...

There are a lot of figurative "snake oil salesmen" at the Show, but these guys win for the most literal interpretation of it.

Yes, they're literally selling tiny flasks of oil (for thirty bucks) that they say will help you play better golf.

The flasks clip to your bag. Then, you "simply unscrew the cap and waft under your nose as desired."

What, aromatherapy isn't already part of your pre-shot routine?

The scent is supposed to promote calmness, focus, confidence, trust, and therefore, a better game.

Wait, it gets crazier: this stuff is endorsed by PGA Tour player Mark Wilson, who has played in four tour events this year and missed the cut in three of them.

Maybe he needs to start wearing it as aftershave...or drinking it.

The theory behind this product is actually pretty good; it's the pitch that's terrible.

Nexbelt uses a ratcheting system instead of holes so you can more precisely tighten or loosen it as needed. And retailers should like it because its one-size-fits-all approach simplifies inventory.

Problem is, Nexbelt is pushing a video for how much "faster" it is to put on than conventional belts -- a whopping four seconds faster.

And here I thought traffic was the reason I'm late for work.

Some things can be good ideas, but bad businesses.

Take the Golf Bike, an off-road bicycle with a rack on the back for holding a set of clubs.

Exercise is great and golf carts are bad. I get it.

But how many people can really use this?

There are a ton of golfers (including me) for whom biking to golf courses isn't feasible. I can just see myself peddling this thing down the New York State Thruway alongside tractor trailers.

Sure, you could tote the Golf Bike to the course with your car (it doesn't fold up), but the biggest problem still remains: finding courses that will allow the bikes on their fairways. Most are ultra-protective of their turf and their cart revenue.

The only thing that makes sense about this product is the company's name -- Higher Ground Bicycle Co. -- because you'd definitely need to be pretty high to think this is not a risky business proposition at $700-$800 per bike.

What do you think about the products and pitches above? Was I too harsh? What golf gimmickry have you come across?

LOL -- this is definitely hysterical, but not something new (or newish) I saw at the PGA Show.

It allows you to drink coffee all morning and walk the show floor all day with out stopping.

I actually find this golf-bicycle idea very interesting. It facilitates the combining of a skill game with aerobic exercise for folks that like to bike. It could increase the speed of play. Cycling can be much easier than walking for some people. Most public courses have cart paths and the "bicycle-golfers" could be confined to the paths for protection of the turf if that was a concern. Although, I wonder if a bicycle would cause anymore damage to grass than a cart with two riders and bags. Wide bicycle tires, to spread the pressure, might be a requirement that would help. I acknowledge that "bicycle-golf" is a novel idea; a little "outside the box." However, I think this concept has some potential. - Respectfully, (not trying to pick a fight here) - When it comes to new ideas, Confucius might have said - "Mind like a parachute - work better when open." :)

Amazing, I thought the bike golf cart was one of the BEST ideas of the Show! What an extra appeal for kids. And I can't wait to try one and I am 71! Now if we only had more, especially public courses, offering these. Great idea!

GH, you're right. Before this, I helped launch and wrote for two golf trade magazines focused solely on retail (one green grass, one off-course), so I totally get it. That's why I said in the piece: "And retailers should like it because its one-size-fits-all approach simplifies inventory."

It actually strikes me as a good idea for the consumer and the retailer. Was just having a little fun with what I thought was silly marketing message about 'speed.'

The main reason for this belt is that pro-shops &amp; Pros have never been successful selling belts and always have left over stock every year. When you have to buy100 belts in different colors and styles to fit everyone you will have belts left over for years. One size fits all is the key because you only need 12 belts to start your shops inventory.

Wow. Some of the comments here gives one an idea of where the nutty ideas come from.

There was an Ivy League study regarding the effects of certain chemicals and their scents on eye/hand co-ordination.
The combined double-blind study revealed that the smell of jasmine had a marked effect on the ability of athletes to see and strike...baseball and tennis players, as well as golfers ,were studied.
So, there's a bit of science involved in the effect of aromas, during the course of play, on athletes...

Why don't u just say that the golf industry is just ripping people off big time. Put together a 5 dollar piece of plastic and call it a swing trainer, and charge people 40 to 100 bucks unbelievable. Get a pro or golf name to endorse it and double or triple that cost. 3 4 500 bucks for a driver or a putter is ludicrous.

...But I think I may try the Nexbelt after reading all the reviews....