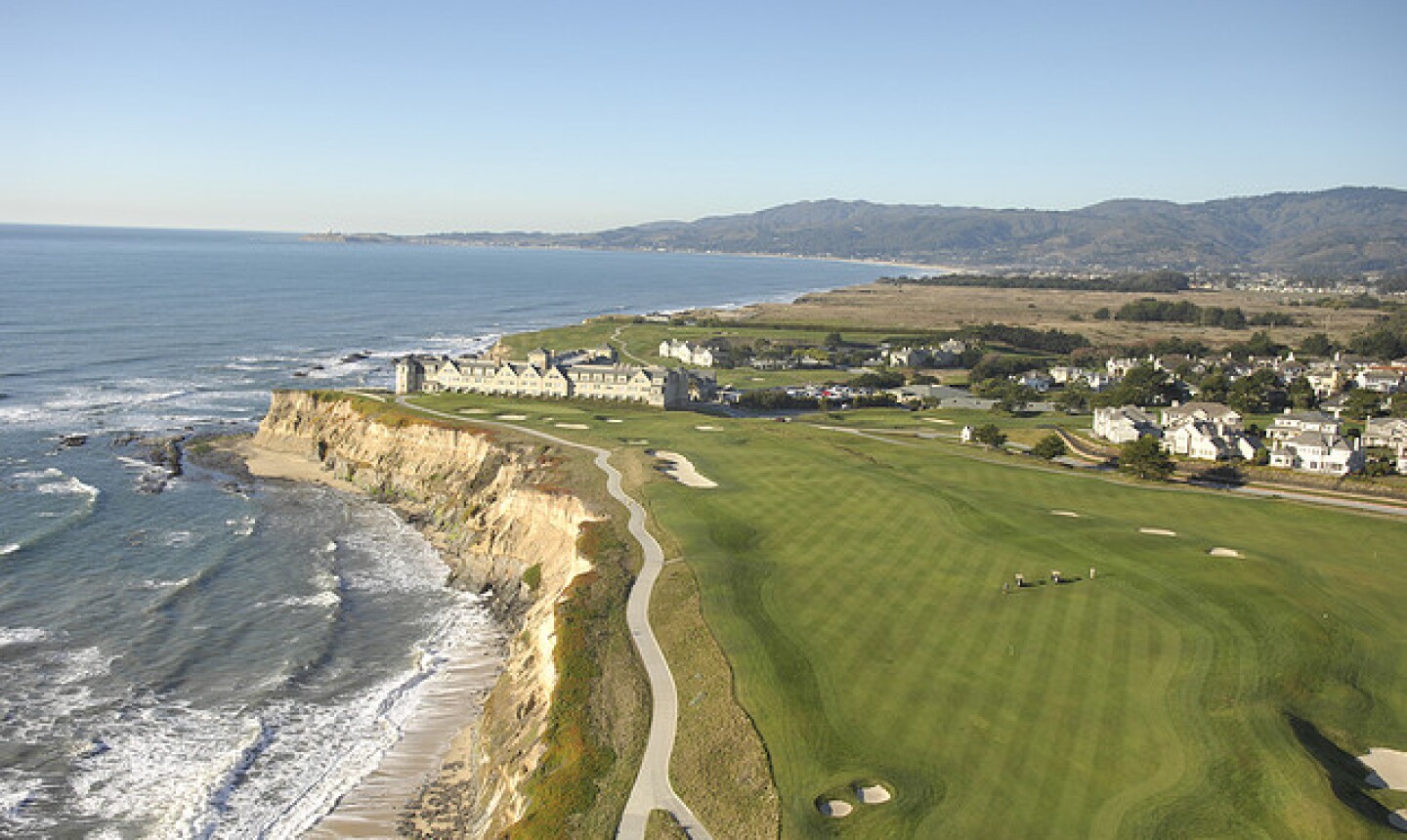 There aren't many scenes that can equal the 18th on Half Moon Bay Golf Links' Ocean Course. Joann Dost/Golf Lifestyles Inc. 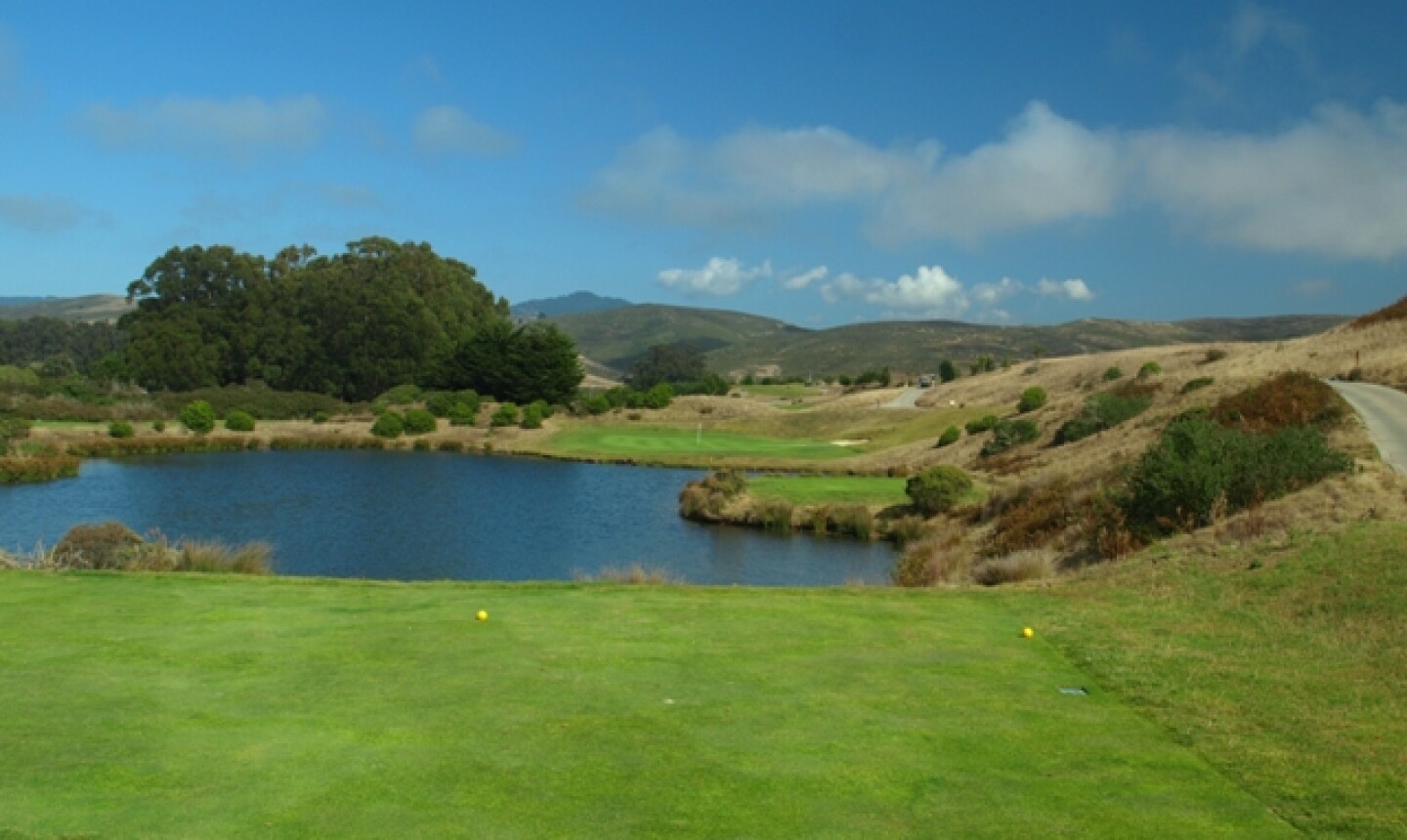 The par-3 seventh hole on the Ocean Course at Half Moon Bay Golf Links is only 155 yards long, but there's plenty of trouble. Mike Bailey/Golf Advisor 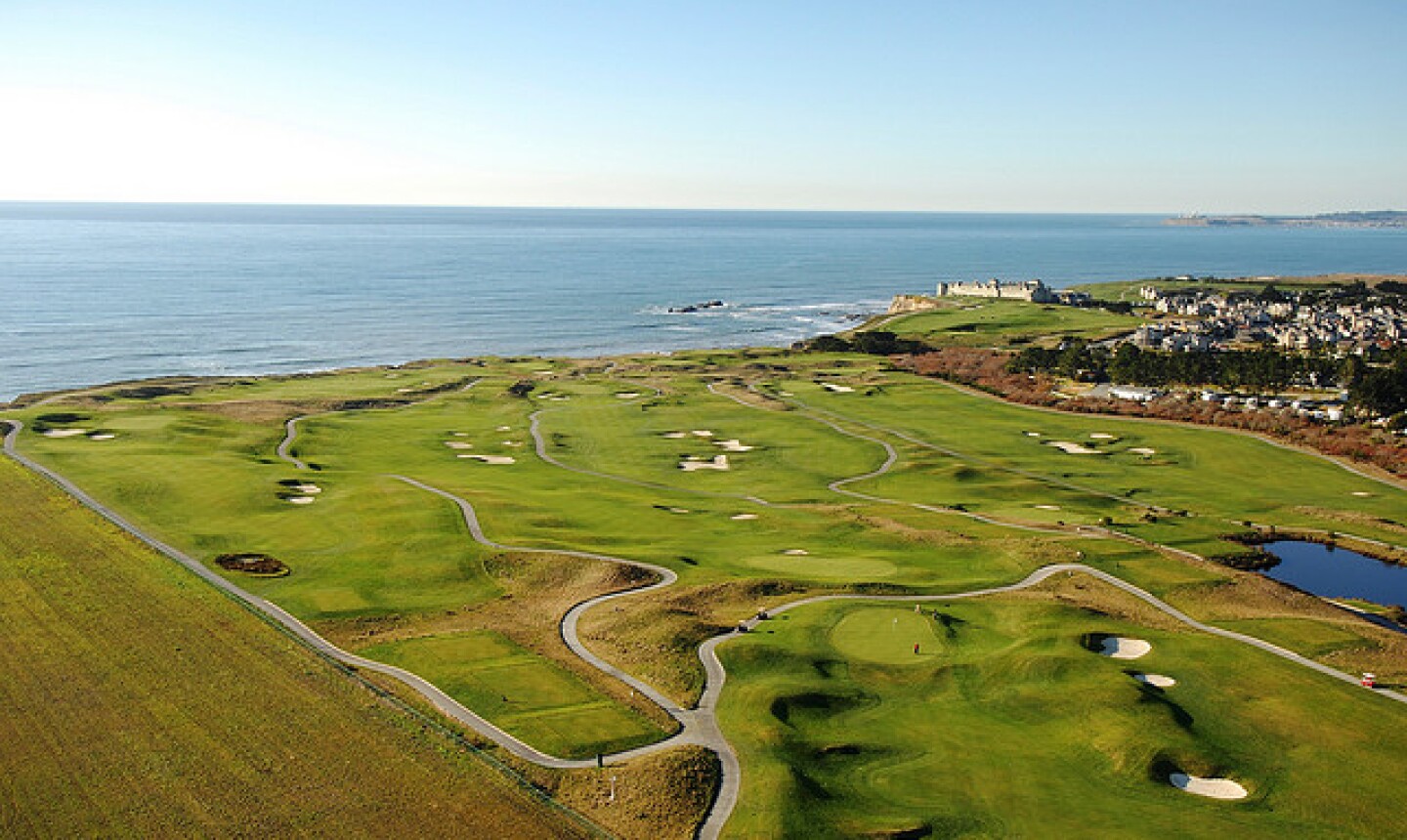 From above, the Ocean Course at Half Moon Bay Golf Links has a real links look. Joann Dost/Golf Lifestyles Inc. 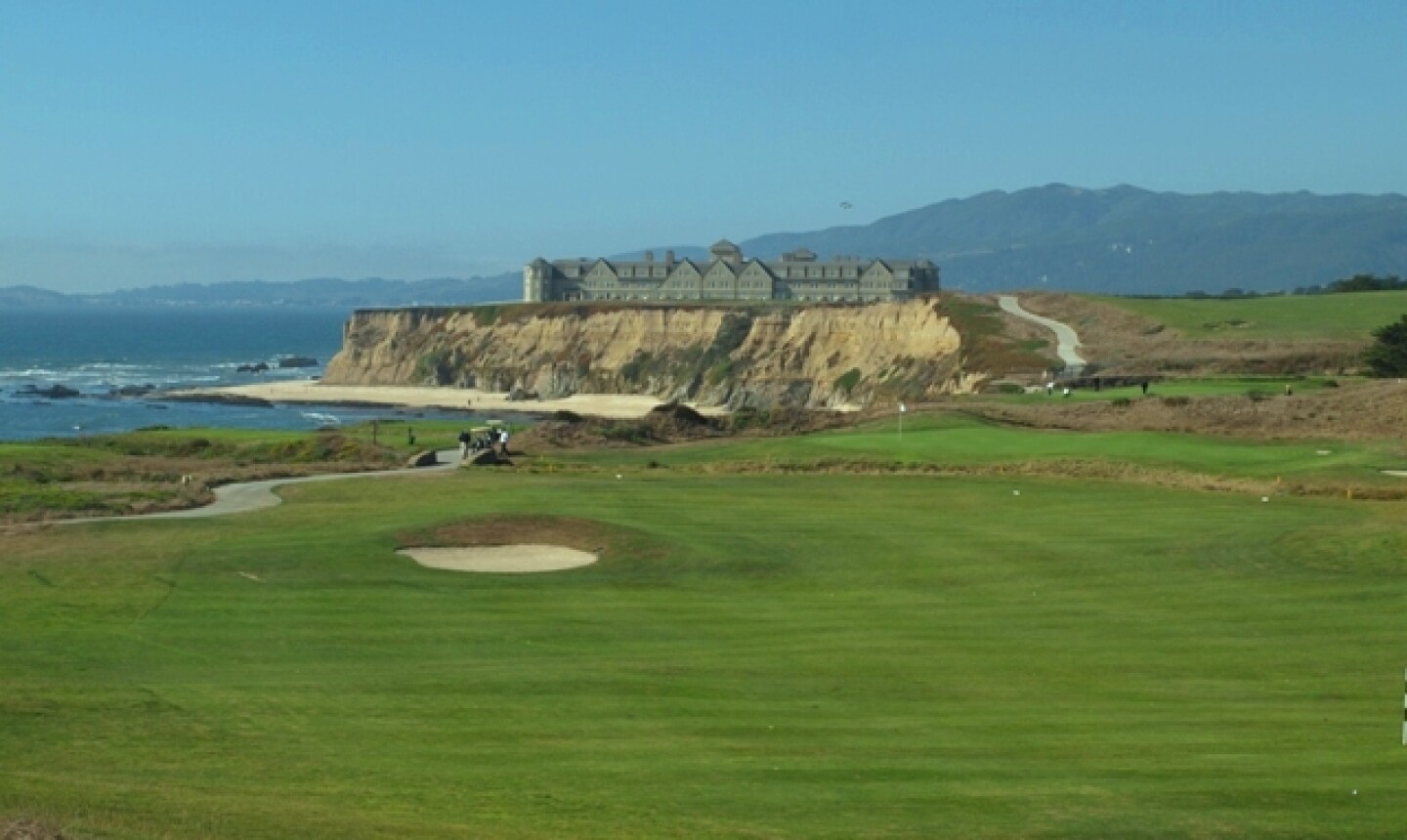 The par-4 16th hole on the Ocean Course at Half Moon Bay Golf Links plays right along the Pacific Ocean. Mike Bailey/Golf Advisor

And over the past couple of years, the Arthur Hills-designed Ocean Course at Half Moon Bay is looking more and more like something out of Scotland or Ireland, not the United States, mainly due to a change in maintenance practices that include lower mowing heights, higher native grasses and less water.

It's been a gradual process. While the golf course isn't true links in the St. Andrews fashion (nine holes out and nine holes in), it's flat, wind-blown and has plenty of views of the Pacific Ocean. The fairways have natural undulation, and the large greens have plenty of movement as well.

The golf course is naturally all Poa annua, and it's now starting to look like it's been there much longer than 1997, the year the Ocean Course opened. It's no longer plush from tee to green. Fairways are being mowed tighter, and scaling back the irrigation produces some natural browns, which means drives and approach shots will shoot forward -- or sometimes another direction. It's the polar opposite of the Old Course at Half Moon Bay Golf Links.

"Where else can you go where you can go and play a traditional parkland course maintained to the edges, go out the back door and play 18 holes against the ocean?" asked Troyanoski.

Half Moon Bay Golf Links' Ocean Course, host of the 2008 LPGA Samsung World Championship, already had credibility. As a regular site of qualifying for the U.S. Open, no qualifier course has played more difficult. The medalist at this year's event on the Ocean Course shot 2-over par.

That might seem surprising if you catch the Ocean Course on a calm day. With virtually no out of bounds and parallel fairways on much of the golf course, you can spray the driver with impunity. Bring in some wind, however, and hitting greens can be difficult. Then once you get to them, putting on the deceivingly fast greens is no cinch, either.

To make it tougher, five new tees have been added to bring the course close to 7,000 yards. A couple of more tees are planned for the future, and already there's been a transformation of some of the bunkers to sod-wall pot bunkers, meaning that catching any one of those will most likely add a stroke to your score. The bunker transition is expected to continue over the next couple of years.

Ocean Course at Half Moon Bay Golf Links: The verdict

If you're looking for a terrific links golf experience at a reasonable price, the Ocean Course at Half Moon Bay Golf Links should be on your radar. With the famed Pebble Beach Golf Links down the coast a bit, Half Moon Bay is accessible and affordable, with rates as low as around $150. And you don't have to stay at the Half Moon Bay Ritz-Carlton to play the golf course, although the experience of combining both is highly recommended.

The golf course seems easy enough from the first hole, but it progressively gets more difficult. The front nine is somewhat shorter than the back nine, but a couple of the par 4s -- when playing into the wind -- are a challenge to reach in regulation.

The ocean and cliffs along the Ocean Course are visible from many parts of the golf course, but those views become monumental as you reach the finishing stretch. From the 15th green and 16th tee, the cliffs and the Pacific Ocean loom to the left, making the Ocean Course a truly special experience.

There is no driving range at Half Moon Bay Golf Links, but both golf courses have excellent short game areas. A practice bunker on the Ocean Course is the best place to get in some full swings before the round. Lessons are available from the professional staff.

Stay and play at Half Moon Bay Golf Links

The aforementioned Ritz-Carlton is as luxurious and comfortable as any in the company's portfolio. The finishing holes at both golf courses play up to the 261-room resort hotel and its oceanfront courtyard and fire pit.

The Ritz-Carlton features a 16,000-square-foot spa, beauty salon and gourmet dining. There is also tennis, basketball courts and trails that run along the ocean and edges of the Ocean Course. The resort offers a variety of packages, including golf packages.

In addition to resort dining, Mullins Bar & Grill, named in honor of longtime head pro Clyde Everett "Moon" Mullins, offers both casual and fine dining as well as a large selection of draft beers and wines. The restaurant, formerly known as Caddy's, was renovated in 2006. An array of photographs of the golf courses, as well as images of Mullins' friends such as Joe DiMaggio, Willie Mays, Jackie Gleason and Bob Hope, adorn the walls. 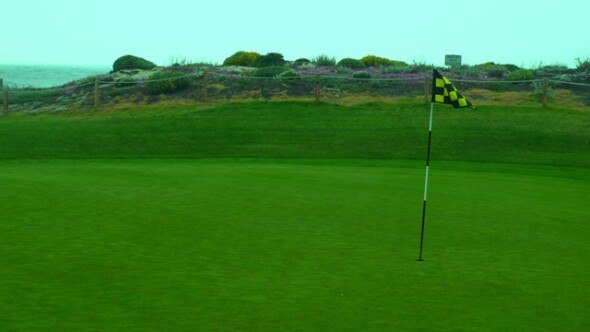 Articles
3 Min Read
Pacific Grove Golf Links on California's Monterey Peninsula: Stunning views and solid play
Overlooking Point Pinos and the Pacific Ocean, it's almost unfathomable that you can play Pacific Grove Golf Links for around $40 or less. But you're unlikely to find a better deal anywhere in the country, especially anything on the ocean. It's a golf course you should play at least once on any trip to the Monterey Peninsula, Mike Bailey writes. 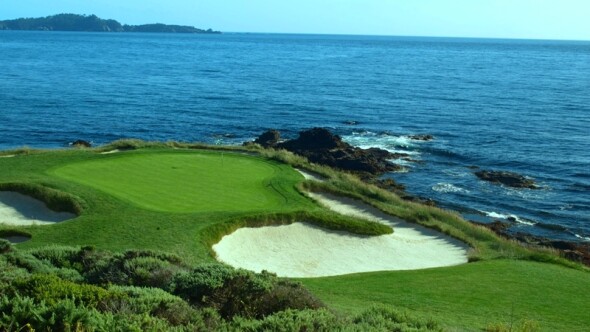 Kira K. Dixon
Lifestyle Correspondent
Now Reading
The Ocean Course at Half Moon Bay Golf Links in northern California is evolving
New Cookie Policy
WE AND OUR PARTNERS USE COOKIES ON THIS SITE TO IMPROVE OUR SERVICE, PERFORM ANALYTICS, PERSONALIZE ADVERTISING, MEASURE ADVERTISING PERFORMANCE, AND REMEMBER WEBSITE PREFERENCES. BY USING THE SITE, YOU CONSENT TO THESE COOKIES. FOR MORE INFORMATION ON COOKIES INCLUDING HOW TO MANAGE YOUR CONSENT VISIT OUR COOKIE POLICY.
CONTINUE
Search Near Me