A golf course's condition is subject to fluctuate more than any other element of the experience throughout the year. It's also, in the eyes of many golfers, the most important part of the golf course experience. In fact, nine of the top-ten conditioned courses that made our Top 25 in 2016 also made our Top 50 overall list.

So this best-of list is for the golf course superintendents. They work lots of hours and worry about diseases, pests, weather, busted sprinkler heads and just about anything else that can wreck havoc on 100-plus acres of managed turf. We analyzed our 100,000-plus reviews in 2016 to find which courses most consistently delivered exceptional playing surfaces. We were pleased to see reviewers credit the maintenance staff for managing extreme and even catastrophic weather conditions. Harbour Town Golf Links, for example, received tremendous praise for their quick cleanup following Hurricane Matthew this fall. Other courses received heaps of praise for keeping the grass alive during summer drought, or managed to get the turf dried out after heavy rain.

This year's top 25 features courses in all types of climates, from the Midwest to the southwest and Florida. Each climate comes with its unique challenges to playing conditions. If you play a course in particularly excellent shape in 2017, be sure to thank the super, grounds crew, and even write a review right here so they can be considered for next year's edition.

Huron, Ohio
What they're saying: "Greens, traps, tees fairways and the rough were all in great condition."

Fleetwood, Penn.
What they're saying: "Fairways were in great shape and the rough was not extremely deep."

Las Vegas
What they're saying: "Every bit as fine as what the pros were getting at TPC."

Maricopa, Ariz.
What they're saying: "Thoroughly impressed with the layout, conditioning and visual appeal."

Indio, Calif.
What they're saying: "Very well maintained, lush and green. Best greens in the valley."

Fort Myers, Fla.
What they're saying: "The course is immaculate with best fairways and testing greens."

Sedona, Ariz.
What they're saying: "Course personnel have worked hard to achieve the great condition."

Elgin, Ill.
What they're saying: "In better condition than some private courses in the area."

Mount Wolf, Pa.
What they're saying: "Greens roll true and are maintained with expert level care."

Sunriver, Ore.
What they're saying: "The Meadows has rebuilt all of their bunkers with a new concept; greens are all newly seeded and are very true."

Woodstock, Vt.
What they're saying: "This is a hidden jewel in the great state of Vermont."

Blythewood, S.C.
What they're saying: "Best greens I have seen since moving to South Carolina."

Galveston, Texas
What they're saying: "The fairways are prestine and the greens are like carpet."

Dickson, Tenn.
What they're saying: "The tee boxes are the best that I have see in quite some time."

Peoria, Ariz.
What they're saying: "Very well manicured, you couldn't tell that overseed had just finished."

Laconia, Ind.
What they're saying: "Smooth, fast greens. And it feels like you're playing links golf."

Sunset Beach, N.C.
What they're saying: "It gave an average hacker like myself a glimpse of the conditions the pros."

Bath, Mich.
What they're saying: "The maintenance crew deserves a round of applause for their work."

Hilton Head Island, S.C.
What they're saying: "Was thoroughly impressed with the condition of the course considering the storm that just passed."

Statham, Ga.
What they're saying: "Greens, top notch! Rolled true as any I've ever played on."

Naples, Fla.
What they're saying: "Course is in fantastic condition and the greens are rolling fast. 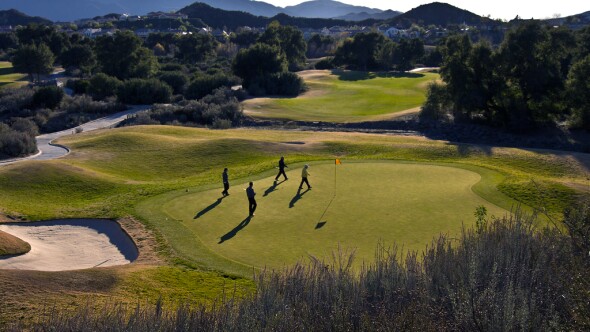 Tim Gavrich
Senior Writer
Now Reading
Top 25 course conditions in the U.S. in 2016 on Golf Advisor
Search Near Me