Why Arnold Palmer Will Live Forever 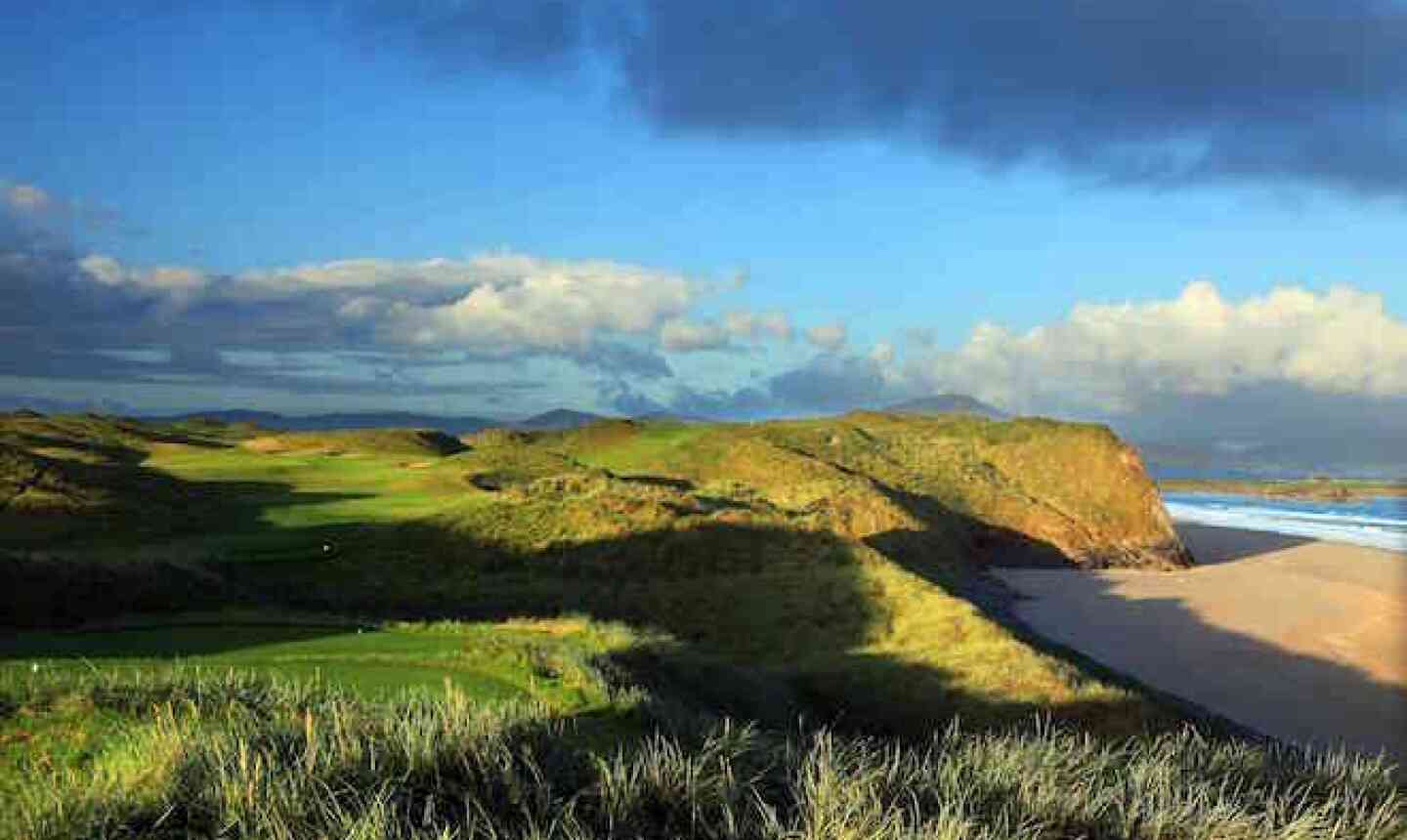 No matter where you live or where you've played golf in the world, you've felt the influence of Arnold Palmer one way or another...and his legacy will live on forever.

Here are a few examples, and please share yours.

For us, certain places will always offer a distinct link to The King, who passed away on Sunday at the age of 87.

Notably, Mr. Palmer's design company is responsible for 300-plus courses around the world, ranging from his designs at major resorts like Kapalua and Turtle Bay in Hawaii, to Reunion in Orlando, to international facilities like Tralee in Ireland (below) and Chung Shan Hot Spring, the first course built in China.

He was sometimes less hands-on than Jack Nicklaus has been in his own design career, but that back-seat philosophy helped Palmer foster the development of a number of respected architects, from late-1900s figures like Frank Duane and Ed Seay to current standouts like Thad Layton, Erik Larsen and Brandon Johnson.

"It was an honor to have worked alongside him over the past 20 years at Arnold Palmer Design Company, sharing his enthusiasm for the game he loved through his work. His legacy will live on through the countless lives he touched along the way and the beautiful courses that bear his name.

Then, of course, there's the King's winter home: Bay Hill Club & Lodge in Orlando, where he could often be found schmoozing with guests in the restaurant at lunchtime.

Palmer transformed the course and its modest hotel into a cozy shrine to the gentility that will always make him such a beloved figure.

I met him about three years ago in his office.

He clearly was not in great health, but was still quite jovial and could not have been more welcoming.

As you would expect, his office was adorned with an insane amount of memorabilia. He pointed to one which was an actual golf hole mounted in a shadow box with two balls in the hole. He told us the story about it.

It happened at a tournament in the days before there were TV cameras on every hole. He made a hole in one and no cameras were there to capture it.

After the round he was interviewed and he was asked how he did it. He told the media to simply come out the next day with their cameras and he would do it again.

Here's another story from our friend Justin Tupper, co-founder and CEO of the Revolution Golf video instruction platform...

I had the honor of caddying for Mr. Palmer during the opening of Spring Island, South Carolina's Old Tabby Links, which he designed with Ed Seay.

It was a warm spring day (about 90 degrees) and I had a caddy jumpsuit on.

The 9th hole and 10th tee were a long way away, so when we finished on 9, there was a cart waiting to whisk him and the other players to the 10th hole.

Loads of members were getting autographs, so I got started carrying the bag towards the 10th tee.

A minute or so later, the cart caravan approached, so I stepped to the side.

When Mr. Palmer's cart came by he told the driver to stop. He was sitting on the back of the cart and said, "Justin, jump on here with me."

(I will never forget that because he called me by my name.)

I sat down next to him and he put his arm around me -- just like your grandfather would do -- and he said, "How are you doing?"

He looked me dead in the eyes and said, "Well, you are doing a great job."

That moment has always stuck with me.

It was very personal and I have reflected on it a lot in life.

Many people have stories of Mr. Palmer being so warm, personable and sincere.

I'm so fortunate to have one, too, and I already miss him.

Now, we'd love to hear from you.

What comes to mind when you think of Arnold Palmer?

Did you watch him play in his prime on TV? Have you or your friends met him? Played any of his golf courses?

Please share your thoughts and read what others are saying below.

I always remember playing at your home course in Arnold Palmer Automotive Group 1989 Invitational, Latrobe, PA. The advice you gave me "to always give back to game of golf for the next generation" has stuck with me through the years. I still show off the lepel pin you placed on my sweater

I was part of "Arnies Army" in 1968 when I first met him when I marshalled
at the Weschester Classic he was open friendly and gracious. As he was years
later when I met him on several occasions at Bay hill. No one had a greater
name in sports. God Bless The King!

I played a tournament at Latrobe Country Club with Arnies Grandaughter! He followed me for the entire front nine and while I was nerve racked he still complimented my game at the end.

I saw Arnold Palmer hit his first golf ball in the U.K. off the first tee of Pormarnock Golf Club in Ireland in June 1960 before the start of the Canada Cup (now known as the World Cup). The week prior he had won The US Open at Cherry Hills shooting 65 in the final round, speculation was that due to the U.S. Open win he would not come for The Canada Cup but came he did and captivated the British public like no one before him with his charisma and giving attitude to the masses, British golf and indeed world golf will forever be in his debt.

Saw him many times at Bay hill, Took some photographs, Always admired him with his talent, Fatherly figure, very graceful and lovely smile all the time, we are going to miss this incredible man,the greatest Icon of this generation. I salute him with Honor!!Long Live "King Of Golf

I HAD THE HONOR OF BEING IN HIS GALLERY AT PORTLAND COUNTRY CLUB EARLY 1980s! I CAN'T REMEMBER WHAT YEAR IT WAS FOR SURE!! BUT HE HAD HIT HIS TEE SHOT ON THE FIRST PAR 5 DOG LEG LEFT, IN THE BUNKER ON THE INSIDE ELBOW OF THE THE HOLE!! ITS A GOOD TOUGH HOLE! WELL ANYWAY, MOST OF US WOULD HAVE CHIPPED OUT AND 3 WOOD INTO THE GREEN! BUT HE SAYS, "HOW FAR IS IT?" EVERYONE CHIMED IN, SAYING 200 TO 230! NOW THIS IS BACK BEFORE THE GREAT SHAFTS &amp; CLUBS OF TODAY!! SO HE IS HANDED HIS 3 WOOD!! AND SAYS THAT IT SHOULD BE AN IRON SHOT, BUT IO SHOW YOU SOMETHING WITH MY 3 WOOD! HE TOOK A NORMAL SWING AND SMACKED THE BALL STRAIGHT AT THE FLAG, LANDING FRONT EDGE AND ONE HOPS NEXT TO THE PIN 18 INCHES FOR AN EAGLE!! ALL THE WHILE HE WAS WITH US, HE WAS JOKING AND HAVING A GREAT TIME MAKING US ALL LAUGH WITH HIM!! GREAT SHOWMAN, AND GREAT GOLF AMBASSADOR!! WE ALL WILL MISS THE KING!!!

In 1968 Arnold Palmer was the first golf pro I ever saw. He was getting out of a helicopter which landed on the East Course at Wentworth before playing in the World Matchplay event. A magical time for me rememberedl like it was yesterday.

It was in the mid 80's at Augusta, on Wednesday, par 3 day. My wife and I got there early and snagged a position in the front row of #6 green, right behind the flagstick. The pin was in the front center of the green and every group of golfers that came through this hole hit shots past the pin, close to us. I had on a wide brim straw hat and binniculars and I could see incoming shots landing close to us and even some into the patrons. One incoming shot in particular was going to hit me and there was no place to move in the crowded gallery. So I took off my hat to protect my face and head, and before i knew it, there was a golf ball in my hat. So I sat the hat with the ball inside on the fringe. As the golfers approached the green we all recognized Arnold Palmer. As the other pros tended to their golf balls, Arnie looked around for his. We all pointed to hat indicating where his ball was. Mr. Palmer greeted us warmly and asked who owned the hat? He then asked if he could chip my hat onto the green. I said of couse and he chipped my big straw hat gently onto the green and as my hat rolled over, the ball came out, rolled 30 feet right into the cup. What a hat trick!

I'm lucky to have met Arnie and shaken hands with him on several occasions at Bay Hill. One night I was going to the Ritz Carlton in Orlando for dinner and he was standing out front of the hotel by himself waiting for the car valet. As I approached him, I said, hello, Mister Palmer. He smiled and asked how I was doing and if I was playing at Bay Hill. I said, I was the next day. He either mistook me for someone else or he remembered the times we met before at Bay Hill... which is unbelievable. The next day, he showed up at the first hole in a golf cart to watch us tee-off. I was nervous, but I was able to hit my drive well. He waved to us and gave us a thumbs up. Wow!

Kira K. Dixon
Lifestyle Correspondent
Now Reading
Why Arnold Palmer Will Live Forever
New Cookie Policy
WE AND OUR PARTNERS USE COOKIES ON THIS SITE TO IMPROVE OUR SERVICE, PERFORM ANALYTICS, PERSONALIZE ADVERTISING, MEASURE ADVERTISING PERFORMANCE, AND REMEMBER WEBSITE PREFERENCES. BY USING THE SITE, YOU CONSENT TO THESE COOKIES. FOR MORE INFORMATION ON COOKIES INCLUDING HOW TO MANAGE YOUR CONSENT VISIT OUR COOKIE POLICY.
CONTINUE
Search Near Me