Will You Get "Taxed Out the Wazoo" on Your Next Golf Vacation? 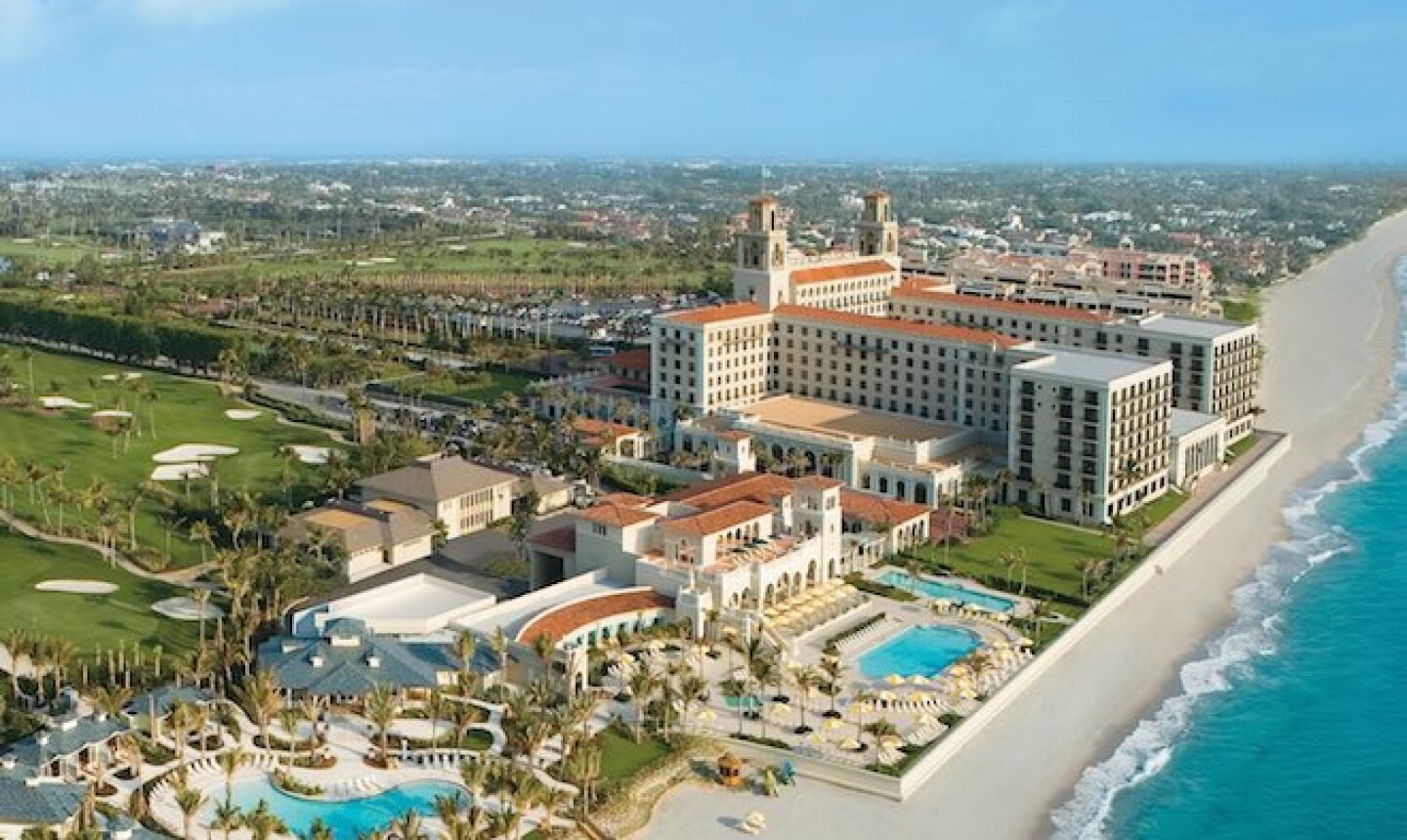 The Breakers in Palm Beach charges for commensurate luxury, but the hotel tax doesn't add too much to the bill. (The Breakers)

With Tax Day coming up this week, we figured we'd ask:

When you estimate how much your golf vacations are going to cost, do you factor in the "occupancy" taxes at hotels and the "airport" or "recovery" fees for rental cars?

With estimates that some U.S. cities are collecting as much as $35-$40 per day in these taxes and general sales tax, you almost have to budget for it if you're traveling to these places, be it on a golf vacation or a business trip.

Something I read a couple years ago really put things in perspective. It was a Global Business Travel Association (GBTA) study that examined the tax practices of, "the top 50 U.S. travel destination cities."

According to the most recent GBTA study, at just over $41 per day (a combination of hotel, car rental and other travel-related taxes), Chicago tops the list of U.S. cities that impose the highest overall taxes on travelers.

Other hotel-tax-happy American cities include Seattle, Dallas, San Antonio, and Houston, each costing upwards of $35 or more per day.

For example, If you want to stay at the JW Marriott San Antonio Hill Country and play golf at TPC San Antonio, where the PGA Tour plays the Valero Texas Open every year, the $319-per night "starting at" rate for golf packages functionally becomes a $360+ proposition per night.

Another study found Portland, Oregon, to levy the highest daily travel tax rate, but that is offset by Oregon's lack of sales tax.

And get this: Cook County in Illinois, near Chicago, proposed an "amusement tax" on golf last year. Luckily it was shot down, but as an alternative, the county proposed... an even higher hotel tax.

On the other side of the coin, here are the American cities where you'll pay the least amount of overall tax on your golf vacations:

Still "part" of the U.S. but an exotic golf travel destination is Puerto Rico, whose struggling economy is driven in large part by tourism. But in terms of pure hotel taxes, Puerto Rico's are actually quite low compared to the rest of the U.S., hovering around 9%, versus a national average closer to 14%.

The U.S. is not the only place where you can get taxed out the wazoo on a golf vacation. If you're a fan of the Mexican Riviera around Cancùn, you'll pay a premium (at least in tax) to enjoy it, as the total hotel taxes across the state of Quintana Roo tip the scales at 19%, which doesn't take into account Mexico's value-added tax on food, drink and other services.

By the way, the Scottish government is currently mulling over whether to introduce a tourism tax itself, and the potentially affected area includes Fife, where St. Andrews is located. This means that already pricey travel around the Auld Sod could get even steeper. Luckily, it looks as if the tax, if approved, will only about £1 per room, per night.

But even before these deliberations over Scottish tourism taxes, the United Kingdom was found to have the second-highest total tourism-related taxes of any country in the world, with only Switzerland's being higher.

This is mostly due to the Air Passenger Duty, which is a tax of some £70 on every passenger who flies from an airport in the UK. British Airways and other airlines have lobbied in favor of the tax's removal, but have not been successful yet.

Have you found yourself taxed a lot (or a little) based on where you've taken your golf vacations?

It's great to read something that's both enjoyable and provides solutions.

How about Scottsdale &amp; Phoenix? I rented a car at the Sky Harbor airport a few years ago (6 or 7). There was a "tourism" tax; it was $37.00 per day. The car was about $50.00 per day, + "applicable taxes". This single tax put the car over $110.00 per day. When asked, the rep from the car rental agency told us it was "basically a tourism tax here in the county. It's what's paying for the stadium". Terrible PR, Phoenix. Here's what we do now: Hire a shuttle/van/suburban/car service to bring you to your destination. Rent the car off-site, in another county. Rent a van or SUV, and that tax goes north of $50.00 per day. You can save enough $$ for some pretty good eating over the course of a week.

Ours or theirs? While I agree that it's hard to make apples-to-apples comparisons across all states, the NBTA's methodology seems legit (you can check it out at nbta.org). As for North Carolina, yes, it proposed a general "recreation" tax that would include golf and other activities such as skiing and bowling, whereas California targeted golf specifically.

a great idea for an article, but not much depth and the data is supsect. FYI NC just failed at an attempt to tax golf.

You're spot on, Vincent. Car rental agencies located at airports are usually required to pay the airport various fees, which get passed on to us as "concession recovery fees," "facility charges", etc.

Hello, Just a quick note re: airport rentals vs off airport rentals. I was in Vancouver B.C. last month and needed a rental car to make the very beautiful drive from Vancouver to Whistler Mt. for a 3 day golfing competition. Since I didn't need the car for the first few days, I inquired with the same company about rates and found that the savings were substantial at the downtown location vs airport. ($150 on a 3day rental) It Pays to shop around. Vin NYC

Ed, you win the prize for the most comprehensive comment on our website. Thanks for sharing your experiences!

Gentlemen and Ladies,
I live just west of Winston-Salem, NC and for 26 years have taken an annual golf vacation to Myrtle Beach, SC. I started with 4 guys going for a 3 day stay playing 36 holes per day and we went during a 14 day spread starting on Dec. 25th and running thru the first week in Jan. This you see was the least expensive time for lodging and green fees. The time frame for ridicuously low fees has expanded over the years from the first weekend of December to the middle/end of February. We have taken up to 24 guys on the trip but discovered that 8 is the perfect number. There are several resorts that offer fantastic bargains some of which are the Carribbean Resort, Litchfield Hotel, and the Breakers Resort packages. Other great deals are more expensive but offer only 4 1/2 to 5 star rated courses and these are Barefoot Landing, Pawley's Plantation, and The Legends Resort. As we've aged and become senior citizens, we slowed to 18 usually, maybe 27 holes per day and extended our stay to 5 nites/5 days. We tee off this year at 10AM on 4 days and 1 o'clock on Sat. I book the trip 11 1/2 months ahead of time to guarantee these perfect tee times. I usually rent two 4 man condos with beds for each golfer, full kitchens and one bathroom for every two guys. But you have to shop a little. For example this year I've prebooked the trip for two threesomes (six early commitments) where we play 5 rounds w/ carts, have a buffet breakfast, superior lodging, receive a "free" $60 golf sweater, and room cleaning service and all taxes for $353 per person. If we pick up 1 or 2 other golfers the cost of the trip drops to $323 per golfer. No one gripes with the additional golfers coming in because we booked for threesomes and the golf courses would certainly like the extra monies a foursome would bring in, while the hotel gets the same amount of money they also pickup the extra breakfast buffet charge for the added golfers. We arrive in Myrtle Beach at the Carribbean Resort on Friday evening, play golf Sat. afternoon (instead of morning, saving about $15-$20 per golfer) and Sun. thru Wed. mornings, and driving home following our Wed. round. This year we play one 5 star course, two 4 1/2 star courses, and two well conditioned 3 1/2 star courses. Because of the cental location of the Carribbean Resort we drive no more than 13 miles to any course that we play. Two pieces of advice: (1) book early for the best tee times, and (2) NEVER leave your golf clubs in the back of a van or SUV where they can be seen. Great places to eat are Crabby Mike's Seafood Buffet (south on Bus.17), The Sea Captain's Table (adjacent to the Carribbean Hotel), the Carolina Roadhouse (middle of M.B. on Bus.17),
and Rossi's Italian Restaurant (between M.B. and North M.B.) There are fantastic deals to be had if you take the time to shop around. Three years ago M.B. changed their method of pricing golf trips based on a specific charge from each course you select. We lower our cost significantly by playing one high end course, usually 2 or 3 real good courses, and the remainder ( 1 or 2 ) just well conditioned older courses. The price per course is usually a good indicator of the quality of the course selected.The weather averages about 65 degrees the first week of December. For me it's the best 5 days of the year. When I finally get to retire I'm going to drop back to four golfers and go once every three months. Here's hoping some of this information can help you book a fantastic golf vacation. Good Luck.

Hi Sa. What we said was that Portland had low OVERALL taxes, but it was the worst city studied by the NBTA when it came to traveler-specific taxes like the one you mention.

check out the taxes on a rental car from the Portland airport! The best tip there is to find a car rental place off site, which I bet your readers would appreciate knowing if you're telling them taxes are low in Portland.

Tim Gavrich
Senior Writer
Now Reading
Will You Get "Taxed Out the Wazoo" on Your Next Golf Vacation?
Search Near Me