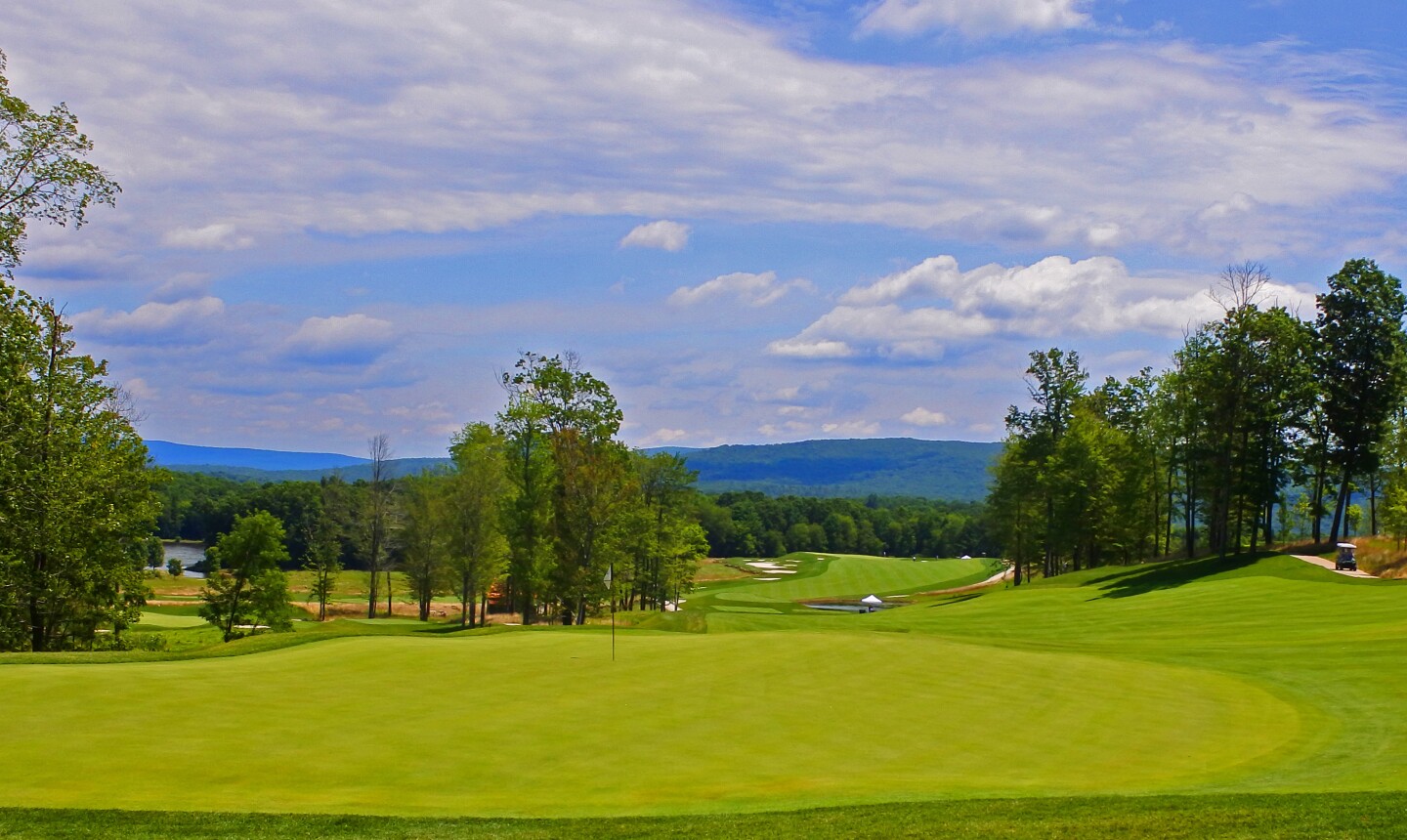 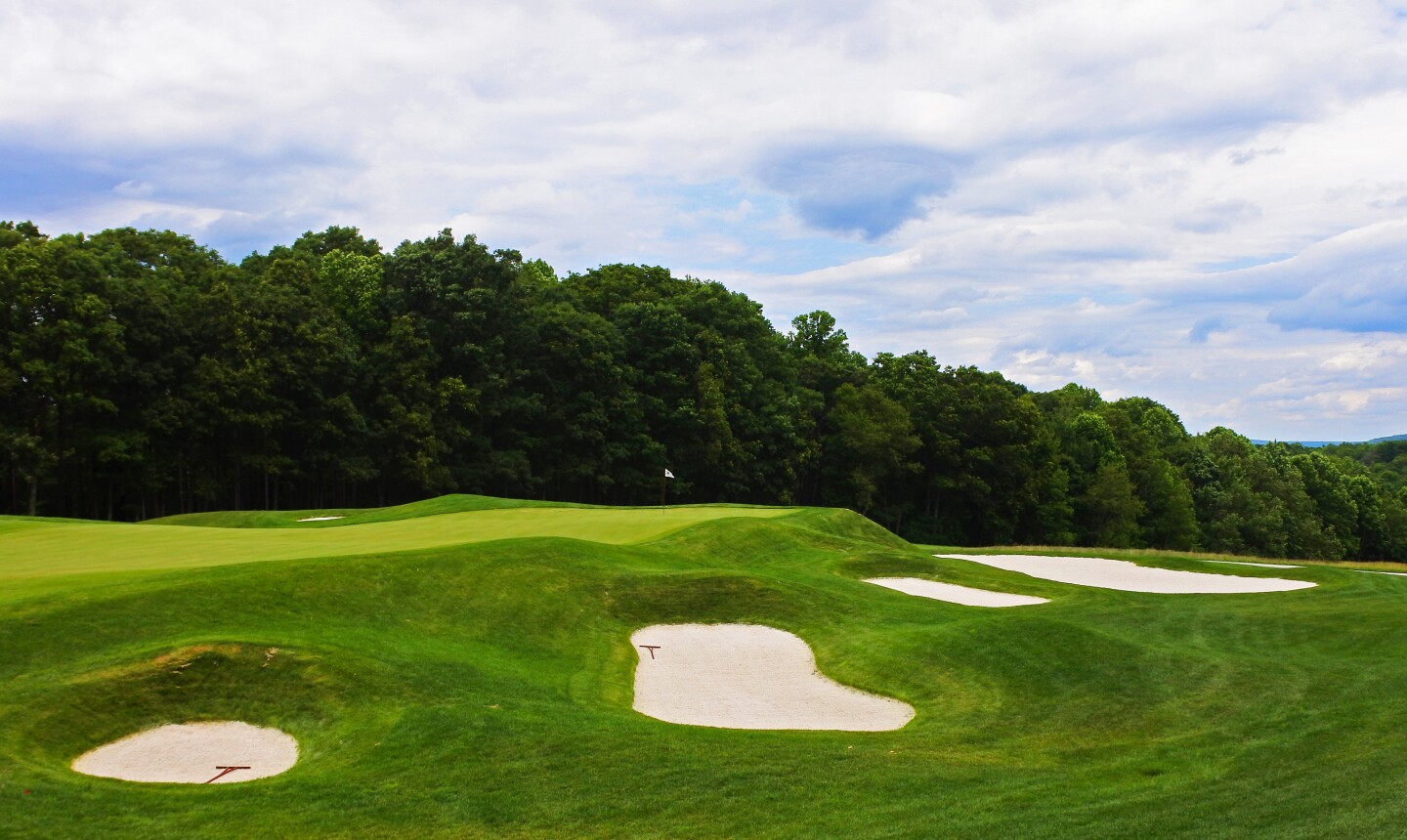 Bunkering is meticulous at Shepherd's Rock, like here on the par-4 third hole. Mike Bailey/Golf Advisor 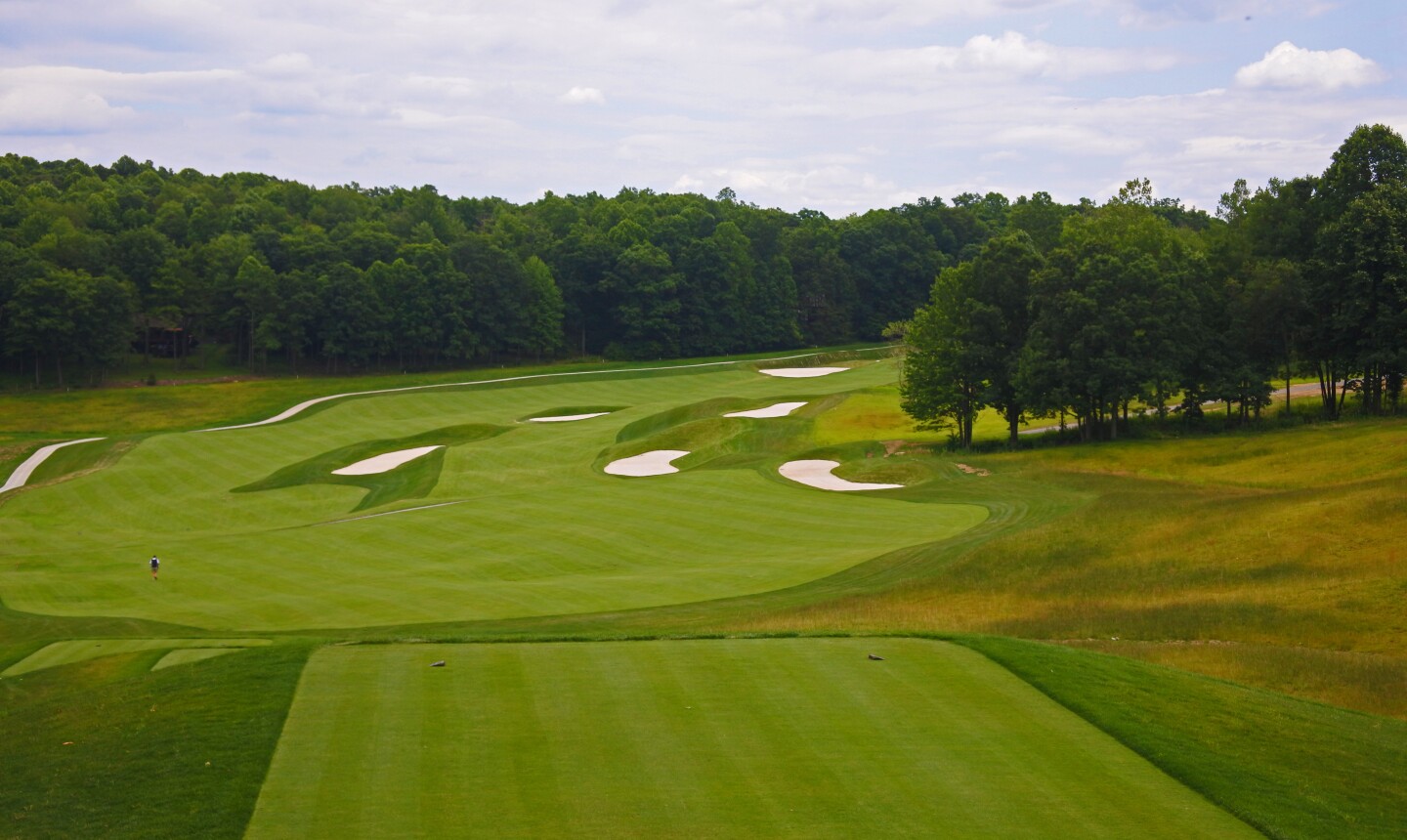 Although there are plenty of fairway bunkers on the 619-yard par-5 fourth hole, fairways on Shepherd's Rock are fairly wide throughout the course. Mike Bailey/Golf Advisor 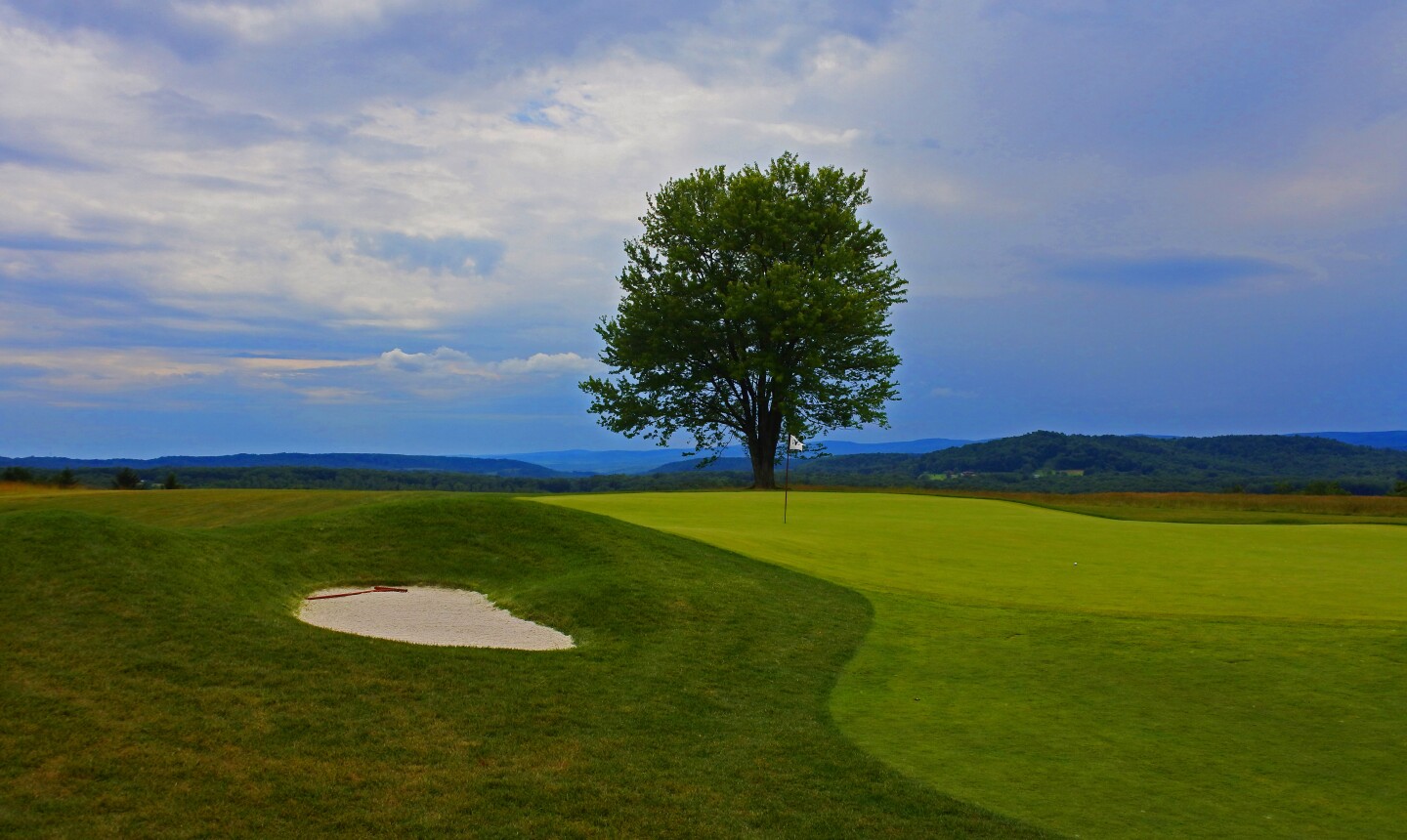 Another nice view, this one from the par 4 ninth at Shepherd's Rock. Mike Bailey/Golf Advisor 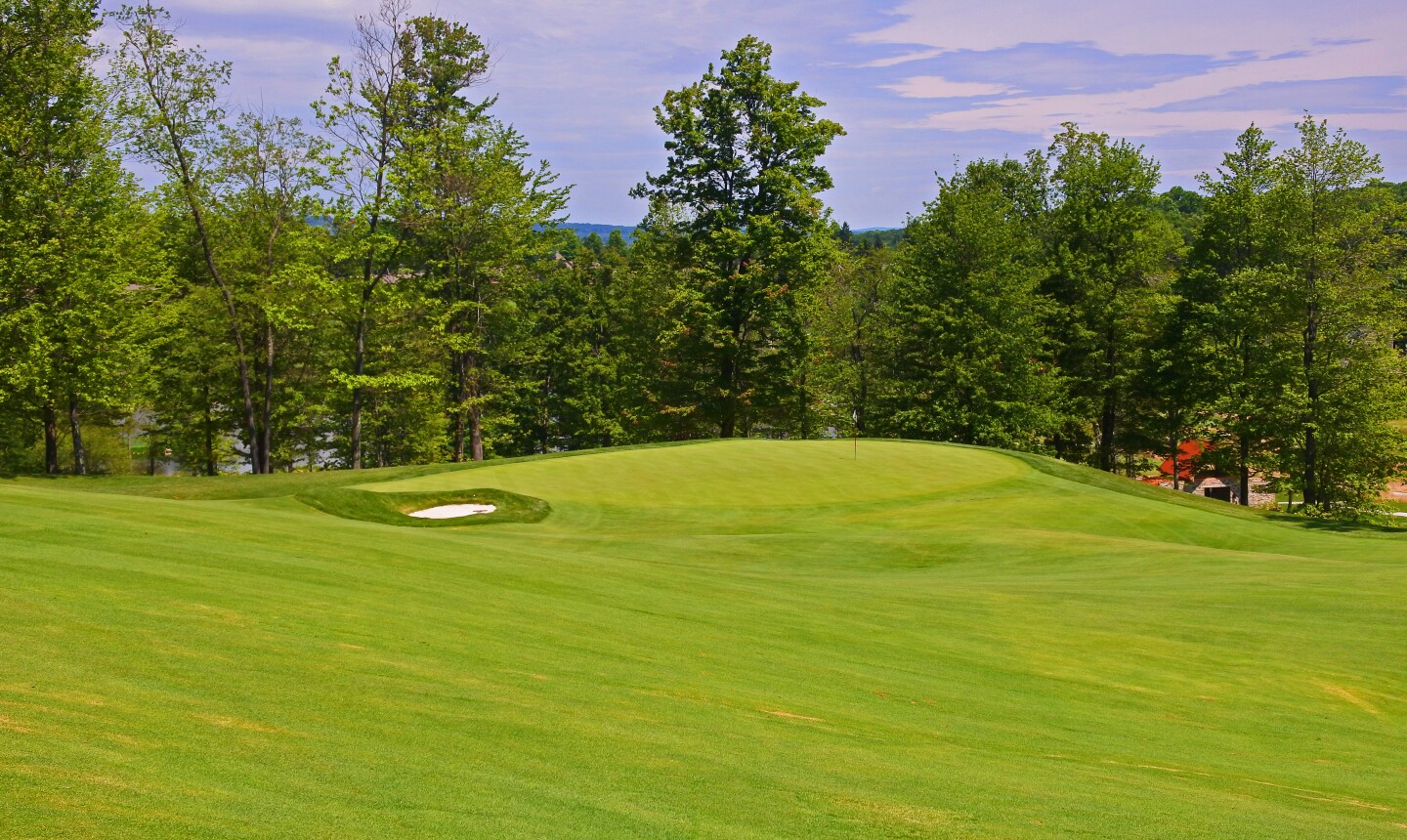 The short par-4 16th at Shepherd's Rock indicates how sloped many of the fairways are. Mike Bailey/Golf Advisor 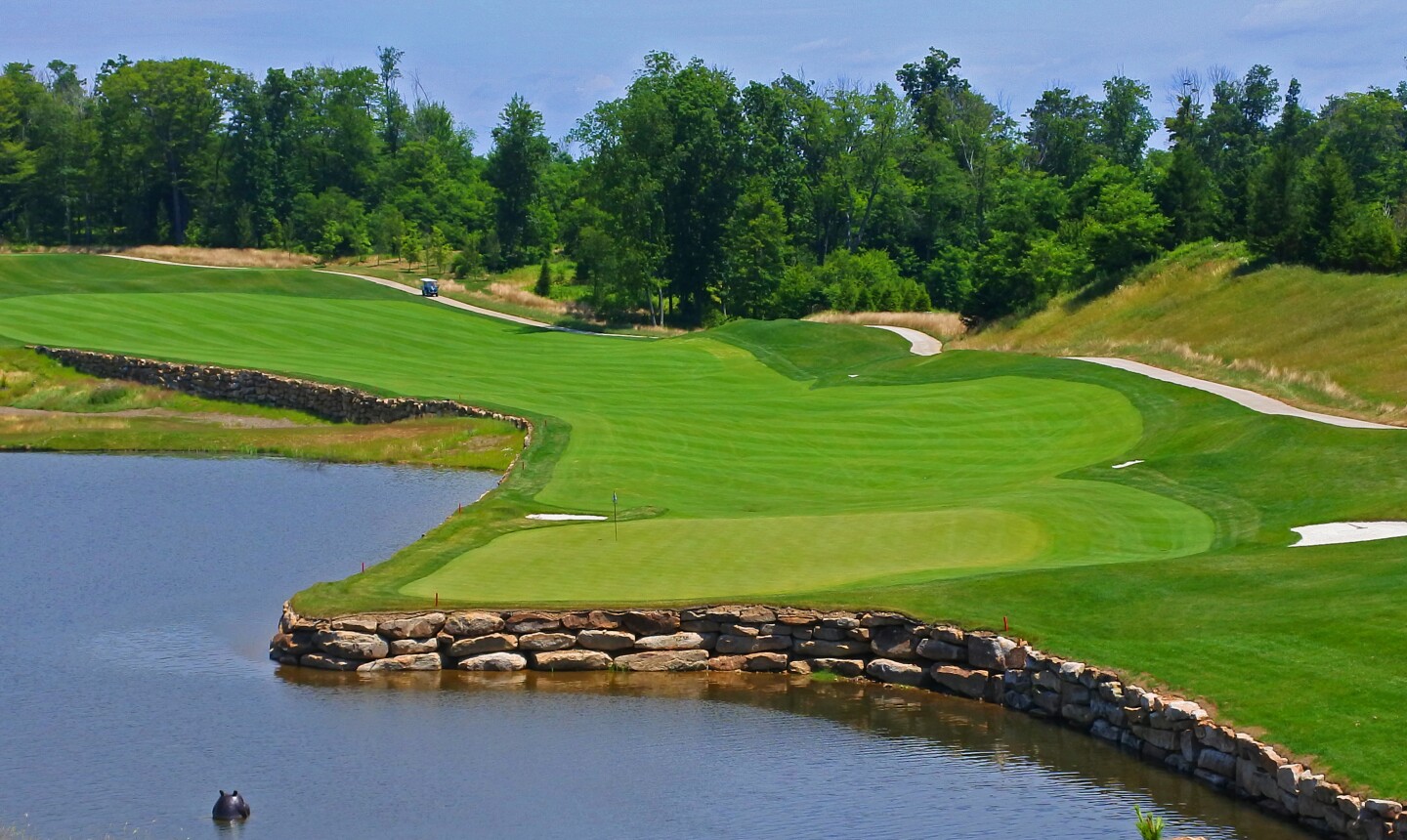 The par-4 finishing hole is a good one at 455 yards around a large water hazard. Mike Bailey/Golf Advisor

FARMINGTON, Pa. -- There are luxury hotels, crazy statues, zoo animals, a midway, a mini-golf course, a spa, an ice cream parlor and five-star restaurants, just to name a few of the attractions at Nemacolin Woodlands Resort in western Pennsylvania.

And now there's another golf course, Shepherd's Rock, to rival the original golf course at the 2,000-acre resort, Mystic Rock, which is ranked as the no. 1 public course in Pennsylvania by Golfweek, and no. 60 on Golf Digest's "Best U.S. Courses You Can Play" list.

Shepherd's Rock debuted in July as one might expect at an over-the-top (in a good way) escape such as Nemacolin – with a bang. Owner and President Maggie Hardy Magerko, who commissioned, for example, the more than 90 statues around the property, pulled out all the stops. There was a ribbon-cutting, of course, with many local celebrities in attendance, such as Pittsburgh Steelers quarterback Ben Roethlisberger and players from the Penguins and Pirates as well as John Daly, who was sponsored by Hardy Megerko's other company, 84 Lumber. Golfers, both members and locals, played in a celebrity pro-am, which was preceded by a media day and special nighttime events at the resort's Golf Academy and hotel, complete with a seafood and sushi spread, open bar and band by the pool.

Hardy Magerko, who named the new course in honor of her father, 84 Lumber founder Joe Hardy -- because he has always been her "shepherd" -- said she hopes everybody gets what they're trying to do there. "It's all about having fun," she said, referring to state of affairs at Nemacolin as "magical."

No expenses have been spared. In the last three years as the resort has been revitalized, the Hardy family has spent $250 million, including the new Pete Dye/Tim Liddy golf course.

"Maggie takes it to new heights," Joe Hardy said. "This is a golf course every golfer can enjoy… I think we're in a transition from those stodgy old golf courses."

A new course for Nemacolin

Indeed, stodgy is out. Both Mystic Rock and Shepherd's Rock are Dye designs but they differ greatly.
Mystic Rock is certainly a PGA Tour course, having played host to the 84 Lumber Classic from 2003-'06. It has some very difficult holes, and the fairways aren't nearly as generous as they are on the new course.

Design associate Tim Liddy, who has certainly come into his own right in recent years and spent months living on property the last couple of years as Shepherd's Rock was being built, said this one is certainly more user friendly. Though the slopes on the fairways are more dramatic than Mystic Rock, they are wide and not difficult to find. The approaches are probably easier, too, however they can look intimidating.

Shepherd's Rock has more dramatic views than Mystic. There is more elevation change, more land movement and bigger vistas of the Alleghany Mountains. There are even features on the course, like the bunkering and moguls, designed to mimic nearby Sugarloaf Mountain, which can be seen in the background.

"We had the opportunity to work with one of the most dramatic landscapes in the country," Liddy said.

First trip to @Nemacolin, for the opening of new Shepherd's Rock Golf Course. Already among the most fun Pete Dye courses I've ever played. pic.twitter.com/5nsFbRdtLE

Shepherd's Rock holds its own

The holes are dramatic and unique. From the back set of five tees, the course plays around 7,150 yards with more than 3,800 yards coming on the front.

The trickiest part, though, might be the greens with both subtle and dramatic breaks. Good putting and short game is the key to scoring on Shepherd's Rock.

The par 5s are particularly stout, including the par-5 fourth hole, which plays down from an elevated tee to a sideways fairway, then turns right and goes straight uphill. A good tee shot, believe it or not, can set up long hitters to go for this green in two, but the second shot is completely blind.

The course also finishes strong. The 18th, from an elevated tee, is around 450 yards and plays around a lake on the approach.
"We already have the no. 1 public course in the state of Pennsylvania," Hardy Magerko said. "We're hoping now that we have the top two and we don't care what order they're in."

In addition to the new golf course, there have been some other recent moves as well.

Eric Johnson, a Golf Magazine Top 100 teacher, has come over from Oakmont to run the Nemacolin Golf Academy, which offers top notch instruction and clubfitting. And Mike Jones, who spent nine years at Kapalua in Hawaii, is now the director of golf and recreation.